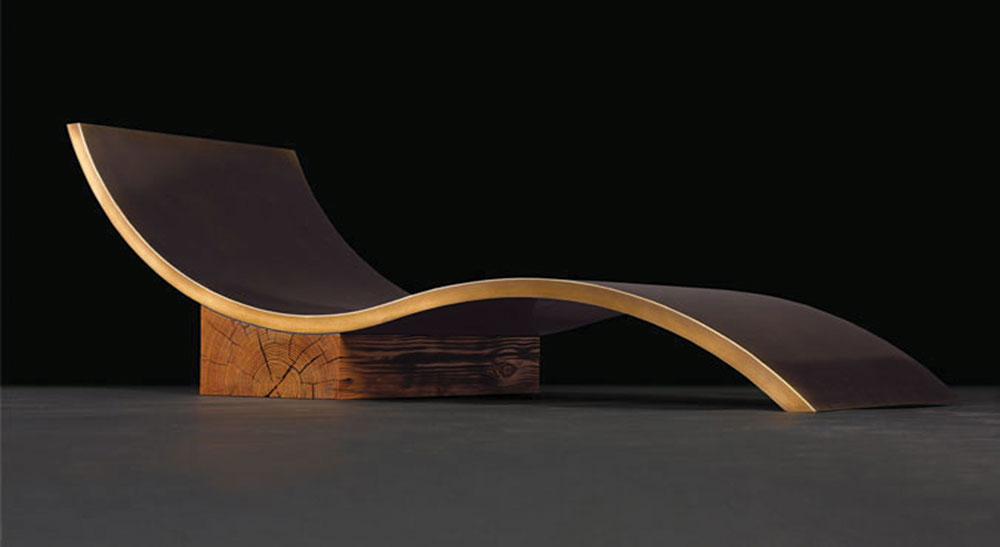 For John Houshmand, an inventive designer and self-proclaimed creator of “functional art, ironically disguised as furniture,” the choice of materials—fine woods, cast and hammered metals, glass, acrylic, concrete—pay tribute to the natural world from which they’re all sourced. “It’s about trying to show affection for the stuff of life,” he says. “Embracing the individuality in nature, the beauty of the imperfections you come across.” 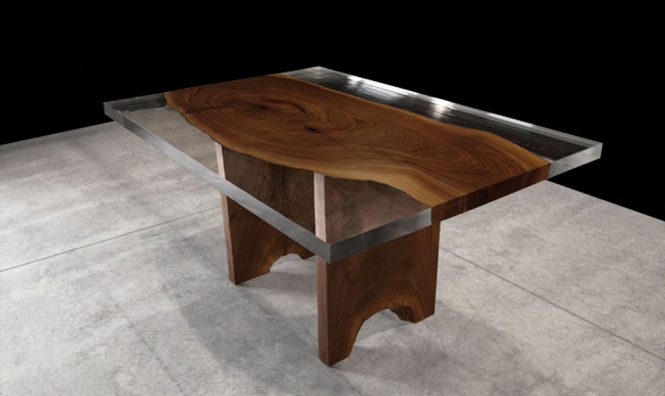 Born in Los Angeles to an Iranian father and a Dutch-American mother, Houshmand grew up in the Philippines, Israel, Iran, and England. Moved by the ancient and modern art he saw abroad, he went on to earn a degree in art history from Yale and study under influential sculptor and interior designer Erwin Hauer. “Whenever I’ve travelled I’ve always been pretty inquisitive about the different materials I’ve encountered,” he explains. “About what could be done with them [for projects] while still keeping them in their natural state.”

In the early 1980s, after living in the Pacific Northwest and creating log structures there, Houshmand signed on with high-end New York City firm Clark Construction. This saw him flying all over the world in search of exotic woods, stone, and other materials to create custom projects for Calvin Klein, Robert Redford, the Phillipe Starck-designed Paramount Hotel, and other prestigious clients.

In 1991, he purchased a 120-acre abandoned farm in the Delaware County village of Hobart as a weekend getaway. In 2003, however, after 24 years of city living, he decided to strike out on his own. “Getting to work for the rich and famous was wonderful,” Houshmand says. “But by then I really needed to get out of New York.” Felling an old, dead maple tree on the farm inspired him to begin making furniture in his barn from locally harvested wood; soon afterward, he relocated upstate to launch his eponymous company full-time. Today, the operation employs 20 people, occupies 900 acres that include a state-of-the-art workshop and several other buildings, and maintains a 5,000-square-foot SoHo showroom. 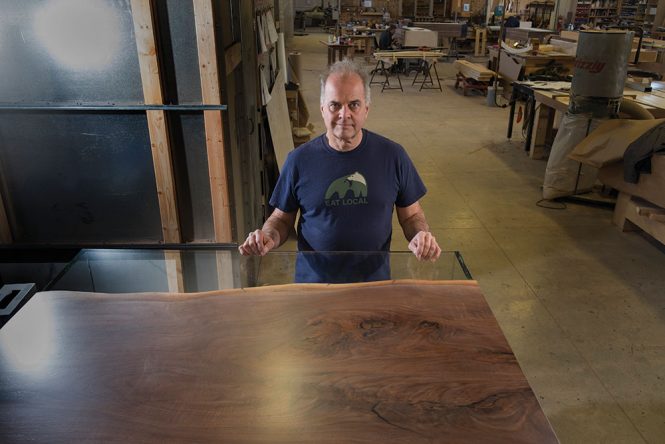 Houshmand’s plum projects include the walls and details for Connecticut’s Mohegan Sun casino, Robert DeNiro’s Greenwich Hotel, and other grand spaces around the world. A recent commission is the massive yet delicate ash wood sculpture above the bar in New York’s Nobu Downtown restaurant, for which he collaborated with architect David Rockwell. The piece depicts a swirl of Japanese sumi-e ink. In addition, Houshmand used thin, curved pieces of wood to create cozy “caves” behind the seating on the ground level.

“[Architect] David Rockwell came to me because he wanted to recreate these giant Japanese brushstrokes in wood,” he recalls. “I said, ‘Wouldn’t it be much easier for you to do it in metal?’ and he said, ‘Sure. But I want to do it in wood.’ So we did, and it turned out great.” At one point in the project, says Houshmand, Rockwell said something that both resonated with his own past work and informed his current projects: “God is in the details.”

Houshmand’s goals include expanding Five Elements, his Feng Shui fountain subsidiary, and Soundwall, an offshoot focused on sonic architecture, as well as launching a line of furniture that’s as surprisingly inventive as it is usable. “Before I started doing this, I thought, ‘If I could disguise art and sculpture as functional things, that would be really fun,’” he says. “And it definitely is.”