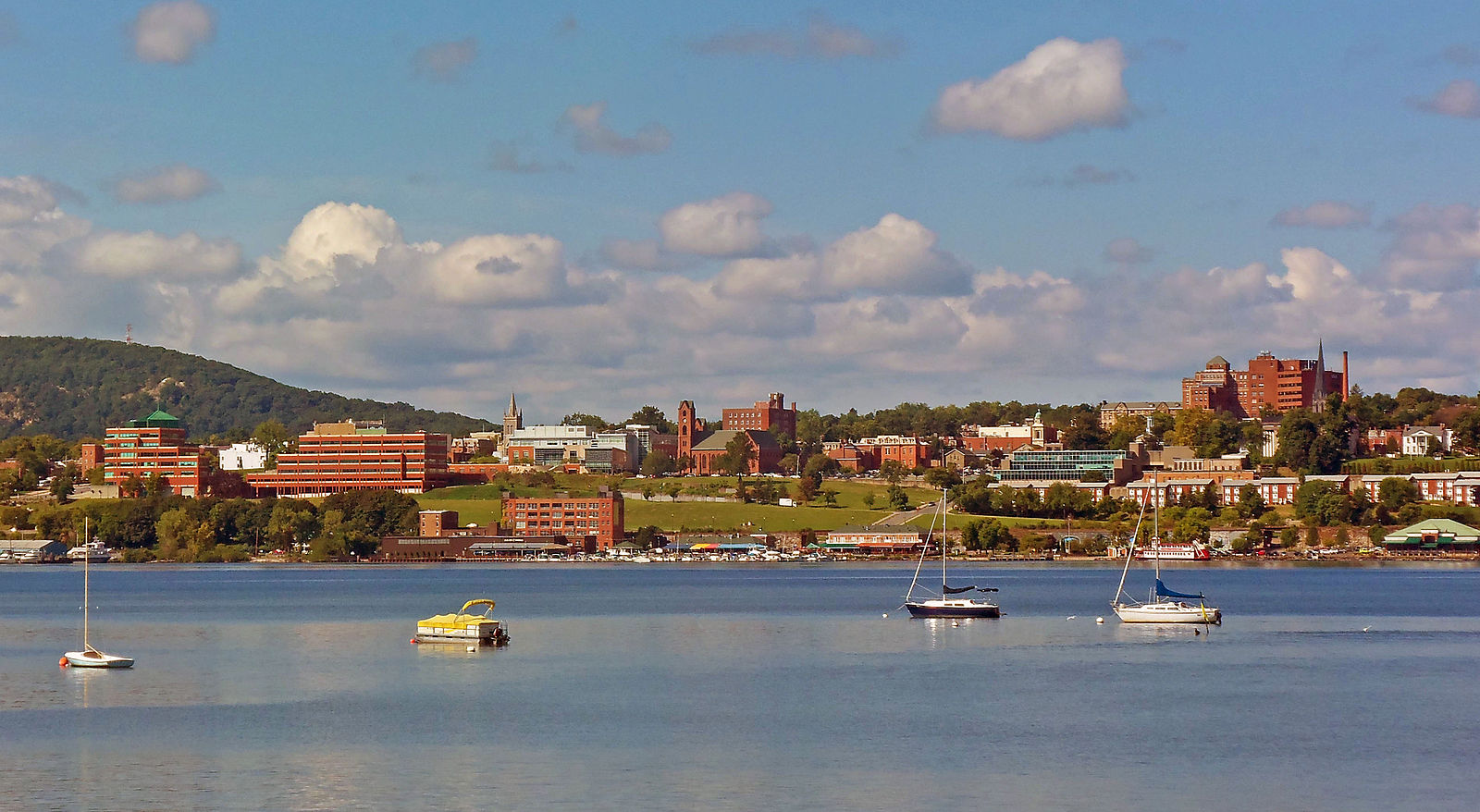 Proximity to Major City: Newburgh is 69 miles from New York City and 80 miles from Albany.

Transportation: Newburgh is located at the crossroads of Interstate 84 and the New York State Thruway. There are four commuter bus runs to and from Manhattan each weekday, and the Newburgh-Beacon Ferry connects to Metro-North’s Hudson Line. New York Stewart International Airport is located six miles outside the city.

Newburgh has struggled with a perception problem. Visitors would often hurry through on their way back to New York City. A slew of vacant buildings—though often architectural gems—turned people off. A complicated history of racialized urban planning led to what local real estate broker Sarah Beckham Hooff calls a “poverty silo” that has lasting effects. When Hooff hired an out-of-towner to install her oven, he was afraid to come to Newburgh and park his truck on the street.

But these days, Newburgh is seeing a liveliness and an understanding that just because an area has seen decline doesn’t mean it always will. Many of those vacant buildings are getting snatched up in a hot real estate market. Property values are up almost 20 percent. Hooff describes a city where neighbors comment on how big her kids are getting or bring her her keys when she accidentally leaves them in her car.

“If you’re going to get hooked on Newburgh, you’ll live in a beautiful house, but you’ll also know how it feels being a member of a community where people are around,” she says. “You’ll get to know the lady at the corner store, and she’ll know that you like bananas or whatever it is. It’s a cool city beyond the buildings.”

Before Cher Vickers became the executive director of the City of Newburgh IDA in 2018, she was already a passionate advocate, covering the city’s on-again, off-again resurgence in her blog Newburgh Restoration, since 2008. Vickers is pleased that friends now want to come visit her in Newburgh instead of the other way around. “It really does feel like we’re at pinnacle time here
in the Hudson Valley where I personally feel an excitement and growth about the region in general that I never experienced in my teens and 20s. People didn’t come up here then,” she says.

The city is full of history—George Washington’s military headquarters stands over the Hudson, and the East End Historic District is an ode to a range of architectural styles dating back to the 1850s. But developers and investors are also pouring new energy into the city. Vickers says there’s a saying: “If you’re trying to describe Newburgh, don’t. You’ll always hear something different.”

“[Newburgh is] three square miles, but you go two blocks up, and it’s a whole different vibe,” Hooff says. “You can have a posh mansion or live on Liberty Street by the corner store. Broadway is super interesting and diverse. There are a ton of different languages spoken. You can live a lot of different lives in Newburgh.”

When Philippe Pierre started investing in Newburgh real estate and restaurants, it didn’t cross his mind to live anywhere else. “It’s not a bedroom community,” he says. “The waterfront attracts people far and wide from Dutchess and Orange and Ulster counties. I think that’s a different clientele than who would come to Liberty Street.”

Many small businesses congregate on Liberty Street and are filling some of the previously vacant spaces, even during the pandemic. Toasted restaurant opened in May, Crab-A-Bag seafood eatery celebrated its grand opening in December, and Newburgh Yoga Shala nabbed a spot on Liberty and Renwick. In February 2021, a pair of business partners launched joint clothing stores, Estilo Muñeca and Kabil & Noil. 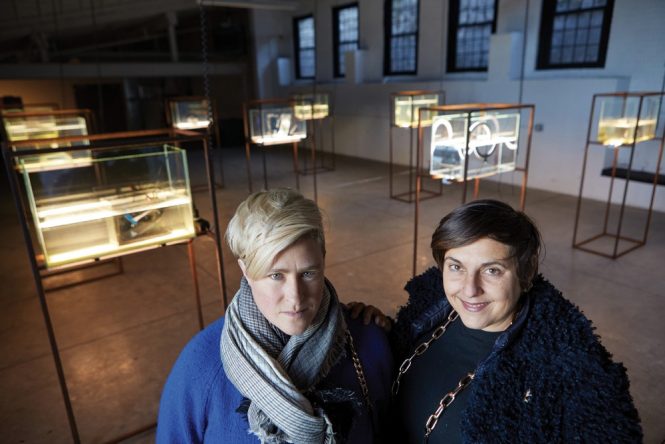 Liz Nielsen and Carolina Wheat run the art space Elijah Wheat Showroom in a former tanning facility on the Newburgh waterfront. The couple are pictured in front of sculptures by Ani Liu.

“There’s a trend of abandoned spaces that were uninhabited and unavailable to the public for a long time becoming places of public engagement,” Vickers says. “You would have thought COVID would stop that and end up with more empty storefronts. It actually hasn’t been the case. We’re seeing more places opening up and being more available to the public.”

On Grand Street, the old Masonic Temple is slated to become a boutique hotel, and on the waterfront, the recently opened Primo restaurant boasts more than 170 outdoor seats alone. “It’s a pretty cool thing to be here and have four different taco places,” Vickers says. “We have options here. I’m only a 5-to-10- minute drive from everything. When people move upstate, they think it’ll be 30 minutes to the supermarket.”

The small business community rallies around the Newburgh Illuminated arts festival, which Pierre says is the best business day of the year for his Liberty Street restaurant Ms. Fairfax, and the Shop Small campaign to support downtown.

Newburgh’s interesting real estate market is part of what made Hooff want to become a realtor in the first place. She explored gorgeous buildings in need of some care. “It was like a fairy world of real estate opportunity,” Hooff says.

As developers sweep in, fewer of those buildings are fixer-uppers, but prices are also going up. The median home sale price has climbed to $280,000, according to Redfin. “There’s a surge in demand for housing in Newburgh and a search for affordable housing pretty much like the rest of the world,” Pierre says. “There have been a number of larger-scale developments that have been proposed and are in the works.”

Sure to shake up the market is the new good cause eviction law that took effect at the beginning of 2022. The idea is to protect tenants, but Hooff says the measure could speed up gentrification. Landlords might be less willing to take a chance on prospective tenants who are right on the edge of income requirements.

The city has also been simplifying some of the bureaucracy around building and renovating, Hooff says. Building permits used to take four to five months to process, but now you can get one in a week. The Architectural Review Commission, which can make or break a project, has become more transparent over the years in its effort to preserve Newburgh’s signature architectural character, according to Pierre.

“It’s fun to see so many people putting the love of a homeowner into a building as opposed to the love of an investor,” Hooff says. “Not to say that smart investors don’t take care, but we’re seeing not just building renovations but true restorations.”