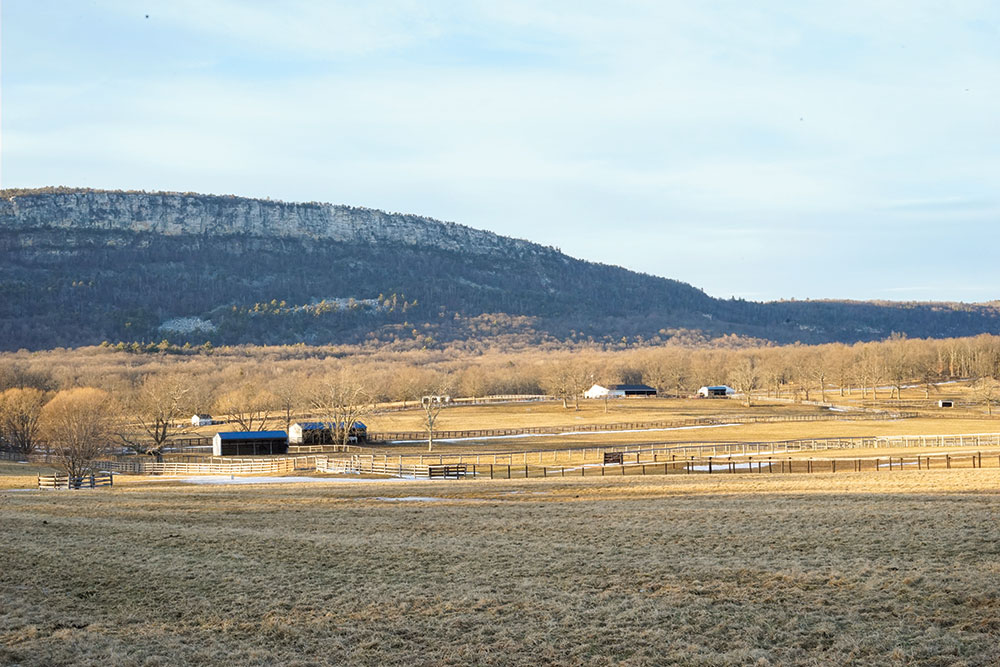 Transportation: Gardiner is accessible from the New York State Thruway/Interstate 87 (Exits 17 or 18) and Interstate 84 (Exit 5). Ulster County Area Transit buses pick up from two locations in Gardiner and connect to the Poughkeepsie Metro-North and Amtrak train station, about 14 miles away. Trailways provides bus service to New York City from nearby New Paltz.

Nearest Hospital: Vassar Brothers Medical Center and Mid-Hudson Regional Hospital are both about 14 miles away in Poughkeepsie; HealthAlliance Hospital is about 21 miles away in Kingston.

The iconic image of the Shawangunk Ridge—the long bedrock shelf looming over southern Ulster County—is more commonly associated with New Paltz since the road leads straight there from the center of town. But locals know that when it comes to majestic views, New Paltz has nothing on its southern sister, the town of Gardiner.

To the west of the orchards that line the edges of town along Route 208, the sparkling Shawangunk Ridge rises suddenly above the hamlet of Gardiner  (population: 950), glowing green in spring and summer and blazing red, yellow, and gold in autumn. No wonder rock climbers from around the world are drawn to the Gunks’ dramatic cliffs of quartz conglomerate—or that this sleepy town with the dramatic backdrop is quietly coming into its own.

The hamlet of Gardiner was formed in 1853 from parts of New Paltz, which was settled by the Huguenots, who fled religious persecution in France. The town of Gardiner, with 5,700 residents in its 43 square miles, was briefly thrust into the national spotlight in 2014, when it found itself in a tussle with its most famous resident, the actor Robert De Niro, over property taxes on his 78-acre estate. When De Niro’s trust challenged a property tax assessment and then appealed a judge’s rejection of the challenge, Gardiner looked to lose more in legal fees than it stood to gain in De Niro’s property taxes. As a result, an accountant for the trust told the New York Times, “Mr. De Niro’s requirements that we give priority to good relations with the community suffered.”

That comment says a lot about Gardiner. Regardless of how private or powerful its residents may be, the town is first and foremost a community of neighbors and a gateway to the wilderness. Making waves in Gardiner isn’t worth disrupting the calm and togetherness that come with living there. (In a happy ending, De Niro, who was apparently unaware that his trust was appealing, agreed to the town’s assessment and his trust’s accounting firm reimbursed the town’s legal fees.)

Despite its magical setting, the hamlet of Gardiner has a last-chance feel; its smattering of commerce, surrounded by miles of family farms and orchards, tapers off as Main Street moves toward the imposing beauty of the Gunks. The business district has a walkable feel, thanks to a system of sidewalks installed a few years ago, and many of the storefronts are housed in colorful, charmingly maintained farmhouse and colonial-style buildings. Majestic’s Hardware, a family-owned Gardiner staple since the 1940s, is neatly set off from Main Street in an 1800s building that the business says has been used as a general store, post office, and fire house in its past.

The Wallkill Valley Rail Trail runs through the center of the hamlet, and sprawling Majestic Park offers playgrounds, pavilions, a skate park, and a disc golf course. The town hall property doubles as a dog park. If the weather’s good, colorful specks can be seen almost anywhere overhead, descending from the sky—parachutists aiming for the drop zone at Skydive the Ranch.

While Gardiner is a veritable paradise for lovers of agriculture and the outdoors, it offers the added bonus of a central hamlet with all the creature comforts while preserving its status as the quaint, sleepy neighbor of lively New Paltz, which is just 10 minutes away.

“The town has managed to preserve its farming roots and aesthetic by incorporating that into some of the best farm-to-table restaurants, wineries, and arts-and-craft shopping in the Hudson Valley,” says Vikki Beach, 46, a Gardiner-based realtor who grew up in town.

Gardiner has also become a mini-hub for fancy libations: Tuthilltown Spirits Farm Distillery serves up its own whiskeys, vodkas, gins, and other spirits along with a full menu at Tuthill House at the Mill restaurant. At Gardiner Liquid Mercantile, hyper-local beverages can be carried out or enjoyed at the bar along with artisanal bites. For fine beer lovers, Yard Owl Craft Brewery offers lovingly crafted homebrews and live music. And family-run Whitecliff Vineyard & Winery is renowned for its artisanal, award-winning wines. Throw in a handful of artist spaces—Robert Morris Art & Sculpture, Gardiner Open Studio Tour, Tuthilltown Art Gallery, and Glasson Sculpture Works, to name just a few—and it would seem Gardiner has itself a scene.

First-time homebuyers John Oles, 36, a social media manager, and Sarah Oles, 34, a school counselor, moved to New Paltz after meeting at the University of Scranton, and pounced on the opportunity to purchase a three-bedroom, single-family home in Gardiner last November in which to raise their three children. But the Oleses have also fallen in love with Gardiner’s old-fashioned vibe, and love being able to walk with their kids to the library or the park.

“Gardiner feels like a sleepy small town from the ’50s, where you wave to your neighbors doing Saturday chores outside,” says John Oles over coffee at Village Market & Eatery, where the tables are packed with professionals meeting, young couples brunching, and families. “But it also has an active and inclusive community for millennial parents looking for fun things to do. It’s the best of both worlds.” 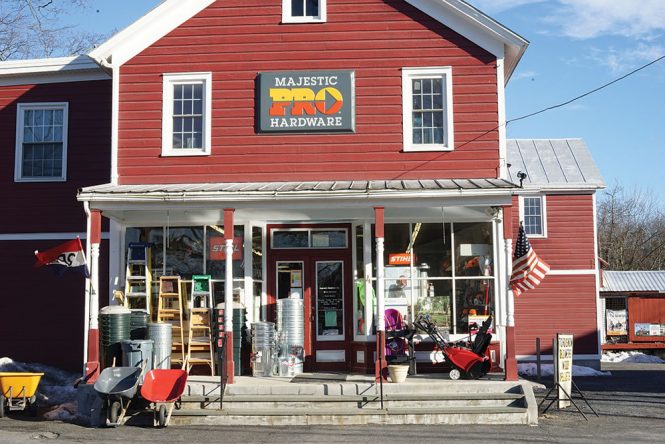 Majestic’s Hardware, Inc., on Dusinberre Road, facing the start of Main Street, has been a Gardiner staple since the 1940s. Photo by John Garay.

Unlike many other picturesque Ulster County towns, Gardiner really does have something for every kind of buyer, in terms of both price and lifestyle. With a median home value of $294,100, the range of Gardiner real estate offerings is as robust as that of the populations seeking to buy there: first-time homeowners, upsizers and downsizers, and New York City weekenders. For first-time homebuyers and families, single-family homes averaging three to four bedrooms and two bathrooms can be had for less than $300,000.

As was the case for John and Sarah Oles, Gardiner appeals to many middle-class homeowners because it is more affordable than New Paltz, yet allows families to keep their children in the locally lauded New Paltz Central School District. Many areas of town are in the Wallkill Central School District, which is also rated favorably. But there are also no shortage of more upscale properties, as higher-end homes in the $1-million-to-$2-million range pepper the town, many with dozens of acres, multiple structures, and those signature stunning Gardiner mountain views.