Transportation: The nearest railroad stations are Croton-Harmon (nine miles away), which is on both the Metro-North and Amtrak lines, and Peekskill Metro-North (12 miles away). Route 202, which runs through Yorktown Heights, connects to the Taconic State Parkway 5 miles to the west and Interstate 684 12 miles to the east. Westchester County Airport is 22 miles away in White Plains.

Yorktown Heights, located in northern Westchester County, about 45 miles from New York City, is renowned for its wealth of nature, its peacefulness, and its high-performing schools, making it a popular alternative for both outdoorsy types and families relocating away from the big-city bustle. But this small, scenic hamlet’s location also makes for an easy daily commute: it’s just 70 minutes away from Manhattan via the Taconic Parkway or a 50-minute train ride to Grand Central from nearby Croton-Harmon, and White Plains is a 25-minute drive.

One of the Town of Yorktown’s five hamlets—which also include Crompond, Jefferson Valley, Mohegan Lake, and Shrub Oak—Yorktown Heights was founded in 1683, and during the Revolutionary War, was the site of a battle between British loyalists and colonists. The loyalists fatally ambushed a group of colonists at Pines Bridge, which crosses the New Croton Reservoir, where a monument is set to be erected this year, marking the tragic event’s 230th anniversary. Thanks to the town’s connection to the Revolution, it was renamed Yorktown in honor of the Virginia town where another decisive battle was fought, and the colonists won.

Yorktown Heights is “a quieter community, but you can find a lot to do,” says Jason Longobardi, 35, a lifelong resident and a bartender at The Pub, a sports bar that’s a favorite among locals for its baseball paraphernalia collection. “From the reservoir to Turkey Mountain, it’s just very scenic. And on the weekends, when it’s nice out, people really take advantage of the trails.” 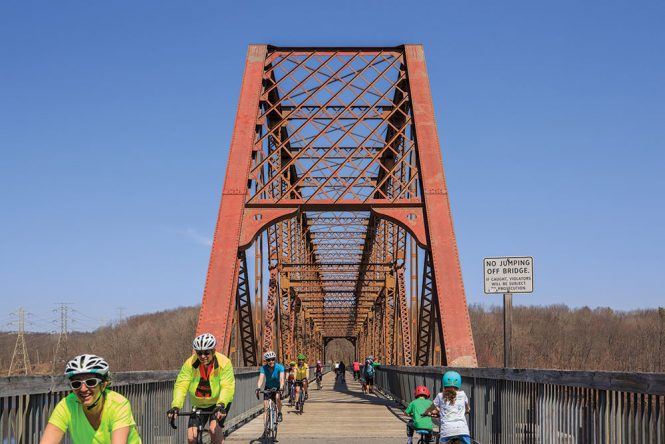 The 22.1-mile North County Trailway crosses the Croton Reservoir at the south end of Yorktown Heights.

And trails and other venues for outdoor activities abound here. The North County Trailway runs from the center of the hamlet to the New Croton Reservoir, which, at nine miles long, supplies much of New York City’s drinking water. Also in town are Railroad Park, which includes a playground and the historic New York and Putnam Railroad Station, built in 1877 and featuring a gabled, hipped roof;  Franklin D. Roosevelt State Park, which features a swimming pool, walking and cycling trails, fishing ponds, disc golf, and picnic areas; and Junior Lake Park, which offers a public swimming pool and playground, along with a summer music series at the John DeVito Veterans Memorial Gazebo. Just a five-minute drive from the center of town is Turkey Mountain, a 771-foot hill that towers over the community and is accessible via a two-mile loop hike maintained by Turkey Mountain Nature Preserve. Also just outside town is the nonprofit Hilltop Hanover Farm and Environmental Center, which offers woodland trails throughout 120 acres of forest along with a farm stand and plenty of you-pick fruit, vegetable, and flower crops.

But Yorktown Heights doesn’t only cater to nature lovers—there’s plenty of community and culture too. Residents gather to celebrate several times a year with live music, food vendors, and crowds. These include annual San Genaro and Native American festivals, Halloween and Memorial Day parades, a firemen’s carnival, and Holiday Lights and New Year’s Eve celebrations.

For culture, there’s the Town of Yorktown Museum, whose exhibits include a recreated 18th-century Yorktown home and an immersive look at a Mohegan settlement, honoring Westchester County’s first inhabitants. Several Colonial structures still stand in town, including Lane’s Tavern, a former public house built in the early 1700s that housed Revolutionary War soldiers and served them food and drink, and the 1739 First Presbyterian Church of Yorktown, which was a meeting storehouse during the Revolution.

Downtown Yorktown Heights is a mix of midcentury office buildings, strip malls, and early 20th-century homes; it offers a variety of restaurants, cafes, markets, and shops, plus chainstores like Panera Bread, Starbucks, Kmart, and T.J. Maxx. The Yorktown Coach Diner is a stalwart, serving people all day. A few blocks away is a cluster of eateries, including the Jewel of Himalaya, which offers vegan dishes; Salsa Fresca Mexican Grill; Oscar’s Italian Restaurant, which features a brick interior and a warm vibe; and Maria’s Pizza, a community favorite. 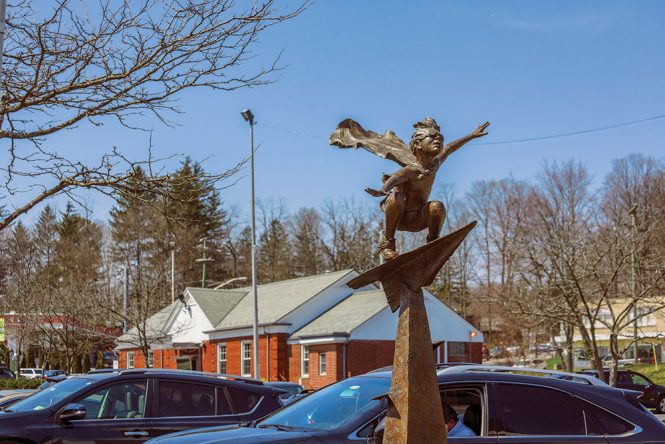 A Gary Lee Price sculpture is a feature of downtown Yorktown Heights.

The Trailside Café, a short walk from the North County Trailway on Underhill Avenue, is popular for its juices, fresh lunches, and outdoor seating area. “We get groups of people that come from local yoga or CrossFit gyms, and they get smoothies with protein or healthy juices,” says Jill Carney, 45, who lives in Pleasantville and has managed the Trailside Cafe for three years. “And in the spring and summer, most of our clientele are runners and bikers coming off the trail.”

There are plenty of indoor fitness options too. On weekends, especially, downtown is packed with fitness buffs of every age hurrying in and out of studios like Bikram’s Yoga College of India, Evolution Acro & Tumble, and Yoga by Beth, plus several family-friendly centers like Solaris Sports Club, W.S. Jeung’s Taekwondo, and My Gym Children’s Fitness Center. Along Route 6 just outside town are Jim Smith Karate and Yorktown Sports Complex.

Weekends are also a busy time at Turco’s, the two-story grocery store on Commerce Street, which sells produce sourced from local farms, imported specialties, and fresh-made salads, as well as offers a gourmet food court, ice cream parlor, and pizzeria.

Yorktown Heights is ideal for families growing into their homes, as it offers a diversity of property sizes and styles, from farmhouses to raised ranches to center-hall Colonials. The median listing price is $419,000, which has been relatively stable over the last three years. Listings include several million-dollar homes north and west of the village center; updated farmhouses and ranch and Colonial houses can be found in town priced around the median range. A four-bedroom, two-bathroom ranch house built in 1959, located five miles north of downtown and offering 2,294 square feet, is currently on the market for $475,000; it includes a front porch and backyard patio area, hardwood floors, and a master bathroom with jet tub and standing shower.