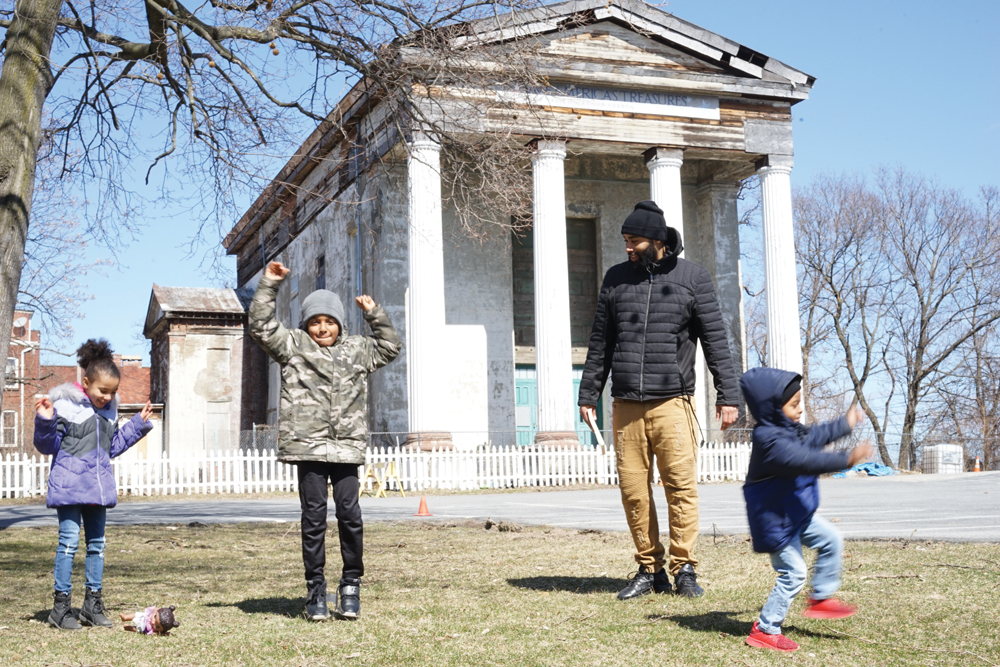 Transportation: Newburgh is located at the crossroads of Interstate 84 and the New York State Thruway. There are four commuter bus runs to and from Manhattan each weekday, and the Newburgh-Beacon Ferry connects to Metro-North’s Hudson Line. New York Stewart International Airport is located just outside the city.

Once busy with sloops and steamships, Newburgh’s waterfront has evolved from a swanky shopping district in the mid-20th century to a promenade of restaurants and bars. Spreading up the hill are four square miles of urban center surrounded by 40 square miles of eponymous town. Within the city proper, the East End and Montgomery/Grand/Liberty Street historic districts are a tapestry of architectural wonders, from brick row houses with fanciful cornices to stately ship captain’s mansions. “People don’t have a clue that Newburgh is the seat of Hudson Valley architecture,” says Reggie Young, owner of architectural salvage shop Hudson Valley House Parts. “Newburgh has early Federalist homes in the historic district. The Andrew Jackson Davis Dutch Reformed Church on Grand Street many consider to be the most important Greek Revival Building in America.”

Downing Park, built by Frederick Law Olmsted and Calvert Vaux, and named for landscape designer and native son Andrew Jackson Downing, is the city’s collective backyard, with ice skating in winter and yoga classes and a farmers’ market in the warmer weather on its 35 acres.

Newburgh has nurtured lots of greatness: George Washington’s wartime strategies, Andrew Jackson Downing’s architecture, Lucille Ball’s stage debut. Today, Newburgh benefits from an ever-deeper bench of smart entrepreneurs and activists adding layers of charm to a solid foundation of good design. Newcomers say Newburgh reminds them of their favorite New York City neighborhood back in the day, when it had heart and grit. Mindful of history’s lessons, the drivers of Newburgh’s resurgence are determined to keep her soul intact while elevating her prospects.

Newburgh attorney and city IDA chair Austin DuBois is keen on Wireworks, a mixed-use development partly helmed by ‘Wichcraft restaurateur Sisha Ortúzar, a recent transplant to the city. “The project, just around the block from me, has stayed on track and it’s open—an 1895 industrial classic renovated into a blend of retail, coworking and residential, with a mix of affordable and market-rate,” says DuBois. “It’s one of lots of exciting projects—we have a trio of historic gems on Grand Street being turned into an urban resort by a local developer who’s hiring locals. Our goal is development without displacement. We’re all for people coming here and enjoying the party, but there has to be respect and intelligent oversight. We’re keeping the bar high, welcoming newcomers while ensuring that the focus isn’t just on them.”

Over the pandemic summer, DuBois says, the city stayed lively. The Liberty Street shopping and dining district, a neighborhood that responded to being hit by a hurricane with a massive block-party-cum-cleanup complete with free gourmet barbecue and live performance, welcomed two new restaurants and a juice bar/event space in November 2020. Existing local indies have found ways to thrive; Cream Vintage Boutique, for example, is flourishing online with curbside pickup, and the beloved Blacc Vanilla Cafe is expanding with a new roastery.

“When I opened my practice last year, I did everything locally,” says Dubois. “Luc Pontifel at Thornwillow Press made me jaw-dropping stationery. Rag House did my business cards. I couldn’t have found better anywhere.”

As soon as safety allows, residents look forward to the resumption of festivities like Last Saturdays and the Newburgh Illuminated Festival. 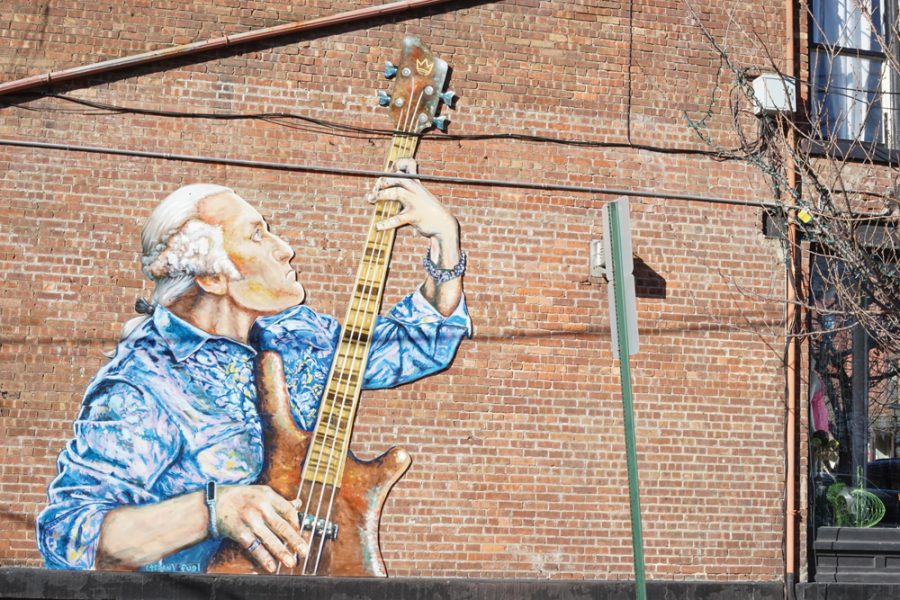 A mural by Will Teran of General George rocking in Newburgh, on the corner of Washington and Liberty Streets, across from Washington’s Headquarters.

“Things are hotter than hot right now; it’s a zoo,” says Janis Borgueta, an independent real estate agent who’s lived in the Town of Newburgh for over three decades. “There’s very little inventory. In the hottest range, say $250,00 to $375,000, it can be frustrating for buyers—you have to be ready, willing and able to move forward quickly to get what you want.”

Long something of a sleeper, Newburgh’s urban core has gotten increasing notice. “In the last two years, the city has had considerable growth in terms of price point,” says Borgueta. “It was just taking off when COVID sent it through the roof. Not long ago you could still find a fixer-upper for $40,000 to $50,000; now you can’t even get a shell for that much.”

Still, compared with much of the Hudson Valley, Newburgh remains affordable, with a median home price of $255,000 and modest condos for under $100,000. Fixer-uppers with good bones can be had for well under $200,000; you’re buying into a lot of work, but the end result will be unlike anything being created today. A four-bedroom 1900 brownstone a few blocks from Liberty Street can be had for $160,000, or a four-bedroom two-family brick, also in the historic East End, for $275,000.

Between $250,000 to $400,000 are newer ranches and colonials, multifamily brick classics, and larger lots. $400,00 to $600,000 homes might be stately gingerbread colonials or renovated brick Victorians with river and mountain views. Riverfront condos can be had in this range, and there are places in prestigious outlying neighborhoods like Balmville.

Nearly 40 acres of sub-dividable farmland slathered in river views was on the market recently for $795,000 on the northern edge of the 12550, or you can pay around the same price for a city home that’s been elegantly refreshed, retaining its original glory while boasting energy efficient and convenient updates.

Above that price point are renovated historic gems and the occasional postmodern architectural wonder.