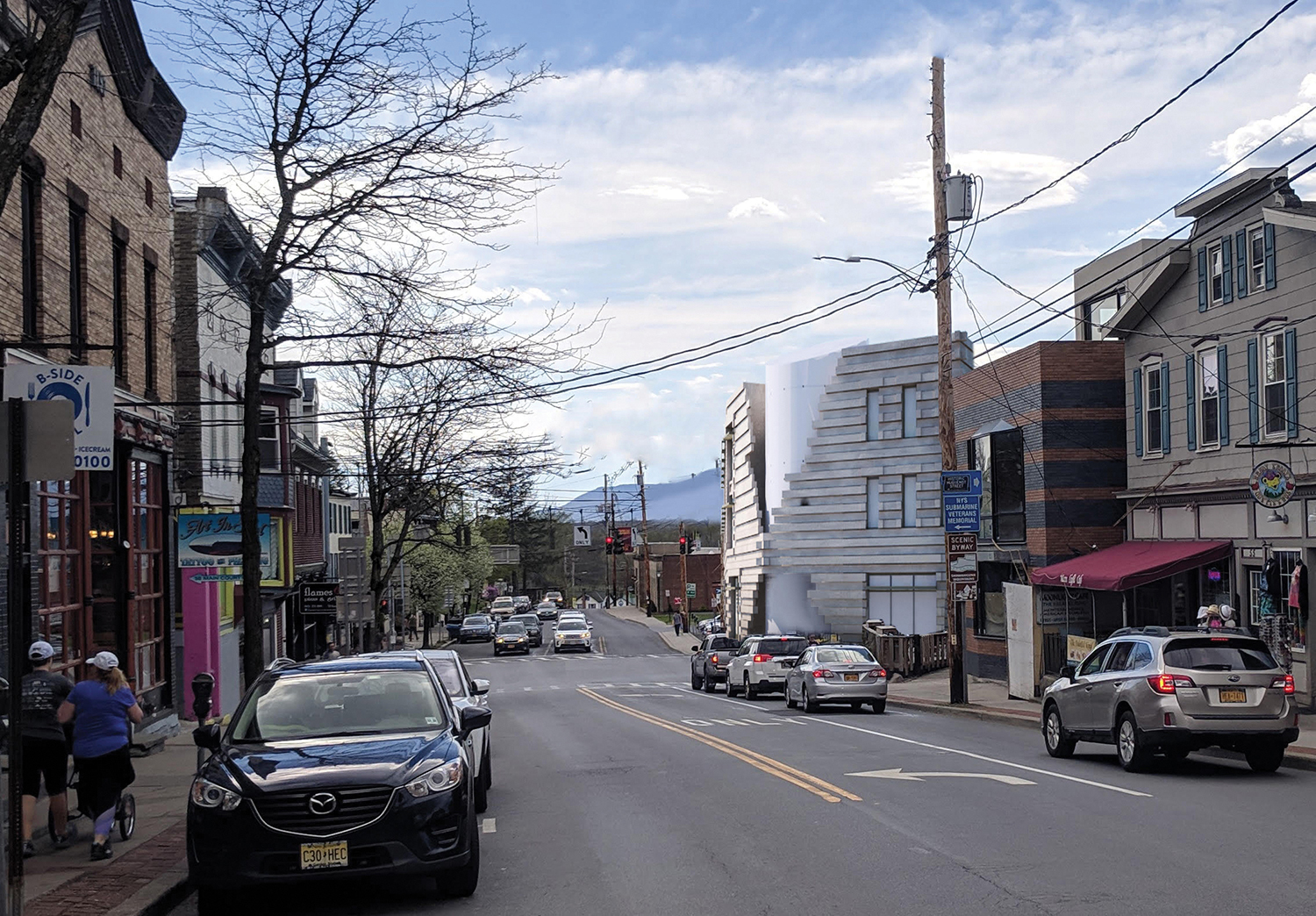 Every Hudson Valley city and town has its own “Lost Rondout,” says architect Matthew Bialecki. He is referring to the 2016 documentary by Lynn Woods and Stephen Blauweiss about the destruction of Kingston’s historic downtown area in the 1960s and ’70s, which made way for federally funded urban renewal. That national project not only destroyed some of the most important architecture in cities like Kingston but also displaced entire communities—a story that Bialecki says he finds “heartbreaking.”

For New Paltz, the loss occurred “at the village’s heart,” where Main Street intersects Routes 32 and 208, with a bad development decision: the razing of the historic 19th-century Muller Hotel in 1958. The demolition of the iconic Victorian structure, which sat proudly at New Paltz’s crossroads, made way for a strip mall that houses the Post Office, a few retail spaces, and a sprawling parking lot, says Bialecki, who has practiced sustainable design, interior design, land planning and preservation, and environmental conservation in the area for over 30 years.

“We got addicted to auto culture; when it came to designing downtowns, we now needed to set minimum standards for parking.”

Traditionally, he explains, downtown commercial buildings were built out to the street, creating “walls” that made the streets feel like rooms, and each building’s decor “was like the artwork we hang in our living room,” says Bialecki.

In the 18th, 19th, and early 20th centuries,  those principles were adhered to in New Paltz, he says, but the loss of the Muller Hotel was a turning point for the village, whose Main Street was created as a corridor of buildings that runs downhill toward the view of the Shawangunk Ridge. The demolition of the Muller Hotel cleared the way for other key Victorian buildings to be razed, and for their modern replacement structures to be set back from the road, thus changing the streetscape.

Ultimately, Post Office Square not only put a large crack in New Paltz’s historic mold but is yet another example of how the automobile’s prevalence can ruin neighborhoods. “We got addicted to auto culture; when it came to designing downtowns, we now needed to set minimum standards for parking,” says Bialecki. “But prior to 1968, there were no zoning laws or land use codes. They weren’t needed. When zoning came in, it changed how communities were built and felt. Those laws became set, and more parking meant more economic activity.”

As part of what Bialecki calls the “geography of nowhere,” New Paltz became home to several strip malls that sprang up throughout town. Meanwhile, the New York State Thruway has been bringing a steady stream of visitors since it opened in the 1950s.

Just another part of “strip-mall America”

This makes New Paltz’s edges look like “strip-mall America,” says Bialecki, so he is leading the charge toward better planning and design, starting with the Post Office Square Redevelopment Project.

The project, he explains, sets out to “repair the loss of historic lower Main Street and revitalize the parking lot around the existing Post Office.” Bialecki’s proposal has yet to be embraced by the square’s owners, the White Plains-based Kempner Corporation real estate investment firm, which specializes in multifamily properties and shopping centers and owns several properties in New Paltz. But Bialecki is undeterred. The project proposes a mixed-use, three-story building for the crossroads, which he calls “the beating heart of New Paltz.” The energy-efficient building, designed to meld with the village’s largely Victorian architecture, would house 16 apartments on its upper floors with 5,282 square feet of retail space on the ground floor.

“My work is about the vision of the future, and also what we’ve lost or destroyed in the past,” Bialecki says. “I’m making people aware of what happened, and how it happened—that it’s the product of a moment in time that we’re still recovering from.

“We built this geography of nowhere, we legislate it, we enforce it, and we perpetuate it—and I’m hoping I can stop this.”