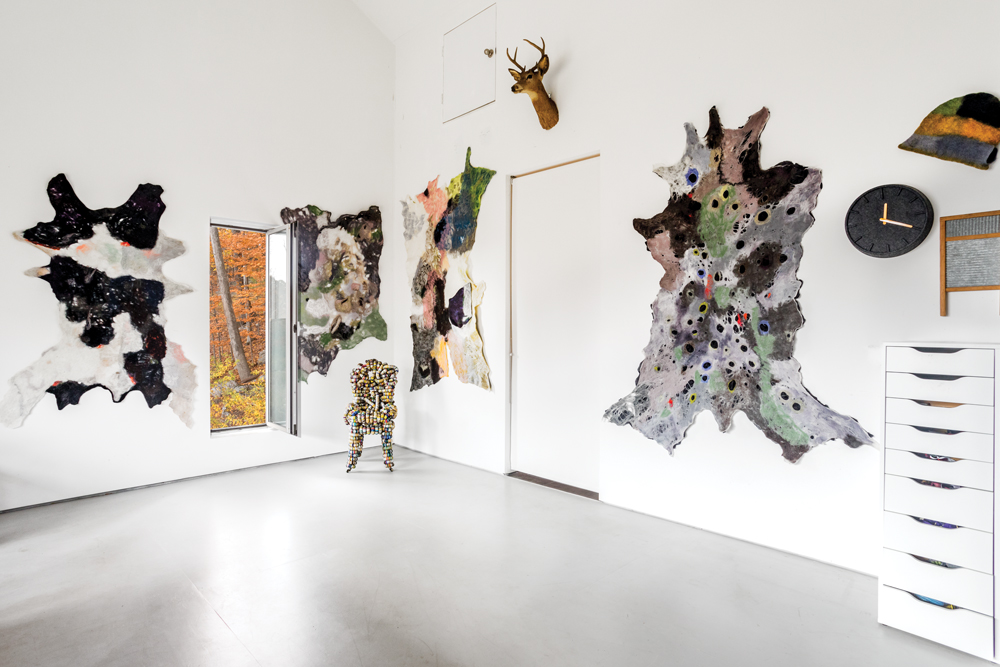 The road south from Ellenville on Route 52 along the spine of the Shawangunk Ridge is one of the most picturesque in the region. With the valley dropping off to the west and the steep pitch of the road, it can feel like driving straight into the clouds. No wonder, then, that artists have long been attracted to the lofty perch at the western edge of Ulster County known as Cragsmoor. The hamlet began drawing artists in the late 19th century, and an arts colony formed by such esteemed painters as George Inness Jr. and Charles C. Curran and has been home to creatives ever since. Today, the area is more well known for its hiking, notably at Sam’s Point Preserve, which has attracted a bumper crop of nature seekers since the start of the pandemic. 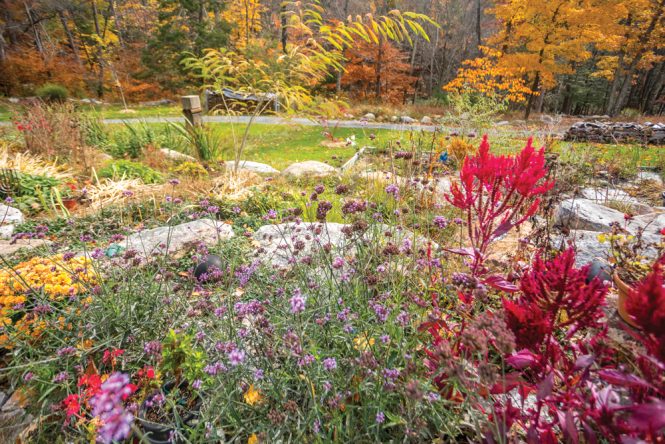 The wildflower and rock garden just off the deck in front of the house. Bowling balls from Goldberg’s collection are visible among the rocks.

Artists continue to make Cragsmoor their home, innovating along the way, as artists do. Meet photographer Beat Keerl and multimedia artist Joan Goldberg. Tired of driving three-and-a-half hours from Manhattan to Keerl’s weekend home in the Delaware County town of Hancock, the couple began looking for a residence closer to New York City where they could live full-time. The couple had friends in Pine Bush, so they began a search radiating out from there and found Cragsmoor. “We fell in love with Cragsmoor,” says Goldberg, “but couldn’t find a house we loved.” 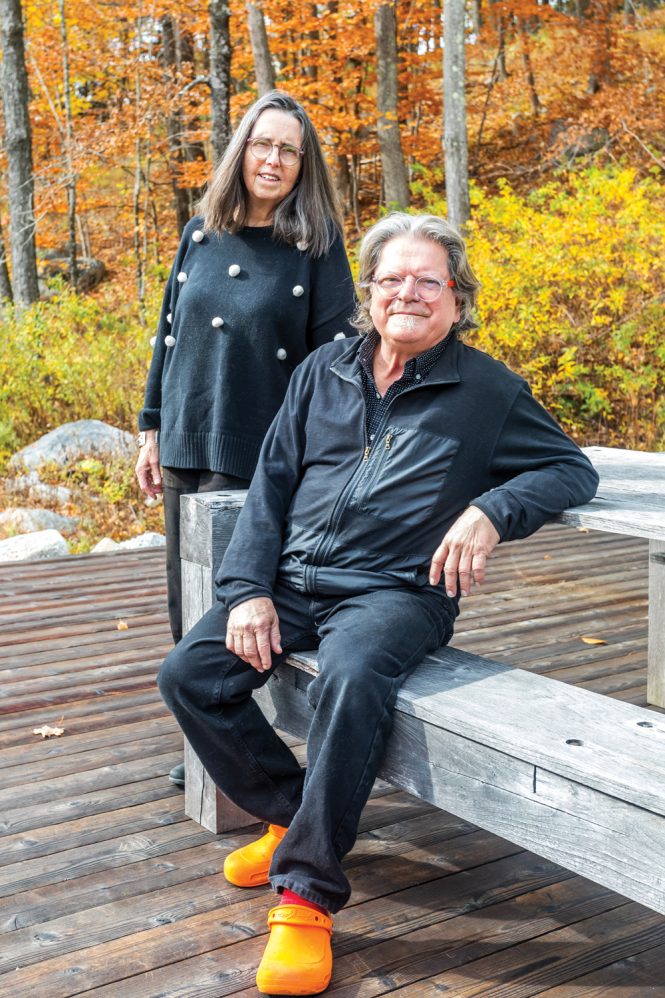 Goldberg and Keerl on their deck, which looks out on a brook and forest abutting state land.

A Home Built Around Windows

Unable to buy a dream home, Keerl and Goldberg decided to build one. In 2010, the couple bought eight acres off Cragsmoor Road. The land features a picturesque gorge with a stream meandering down the hillside. The view from the house, says Keerl, can make the woods seems as if “it’s been untouched by the hand of man.”

Inspired by the concrete homes of architect Tom Kundig, Keerl drew up plans for a Modernist concrete box that would mimic, on two levels, the layout of the SoHo loft where he lived for over 40 years. Working with Pine-Bush based builders, Wood Chips Construction, the house took 18 months to complete. Essentially a concrete box with a standing seam roof, the walls are 12 inches thick, with four inches of insulation sandwiched between four inches of concrete on either side, creating a building envelope that is tight as a drum, ably holding in the warmth of the radiant floor heating and the sunlight that pours in through the many south-facing windows and glass doors. 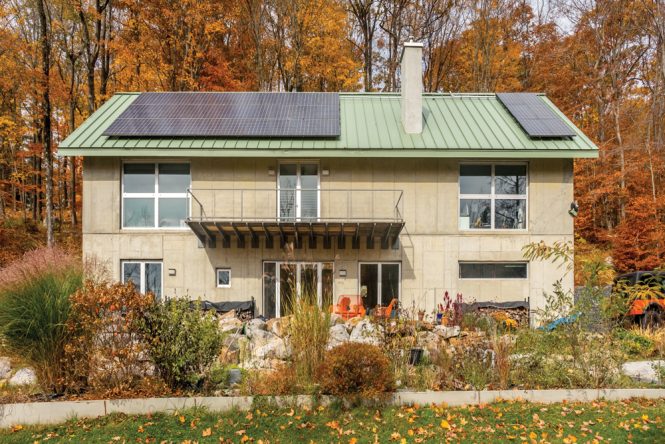 Beat Keerl and Joan Goldberg’s concrete home in Cragsmoor was designed by Keerl to duplicate, on two levels, the SoHo loft where he lived for over 40 years.

The windows and doors were made by Optimum Window, an Ellenville-based manufacturer of custom high-tech metal window and door systems designed for commercial, high-end residential, and landmark applications. When asked what his favorite room in the house is, Keerl responds with Dadaist peculiarity (he’s a fan of Man Ray): “The windows. The windows are all paintings. They allow you to walk slowly past the landscape.” (It’s no coincidence that architect Tom Kundig has also used Optimum Window for many of his concrete building projects.) 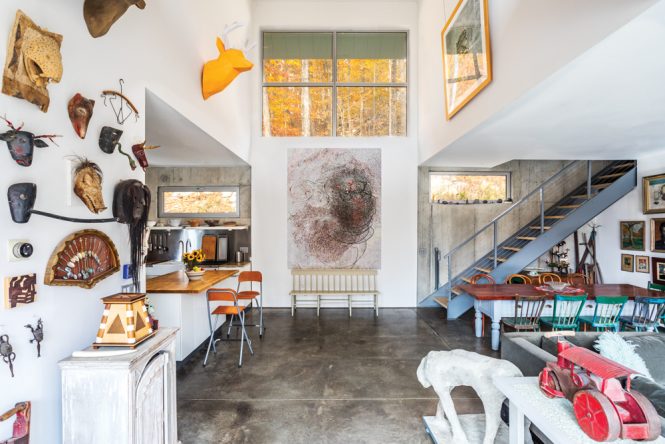 The main area of first floor is open, connecting the kitchen to the left with the dining area near the staircase and the living room area in the right foreground. On the wall to the left are masks from Mexico, New Guinea, Indonesia, Africa, as well as part of Goldberg’s father’s spoon collection. The artwork on the wall under the window is a self portrait by Keerl, Tethys I. The multiple-exposure effect is achieved through a strobe light and a Photoshop filter. 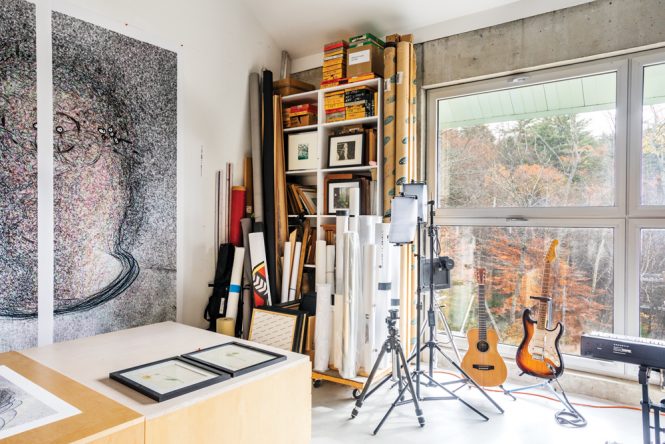 A partial view of Keerl’s studio, including his musical instruments, lighting equipment, and his self-portrait, Tethys II.

Let There Be Light

The 3,400-square-foot house has no basement, and just one bedroom. (Goldberg’s studio, which has its own bathroom—complete with a Phillipe Starck-designed Duravit tub framed against an oversized window looking out onto the hillside—converts into a second bedroom when guests spend the night.) The first floor of the house is mainly open plan, with the dining, living, and kitchen area all merging in the middle of the house under an atrium and second floor mezzanine the connects Keerl and Goldberg’s studios. The bedroom and bathroom are at west end of the house; both rooms feature glass doors that open on to a wooden deck. A garage in the building’s east end house Keerl’s tools and two vehicles he’s restored, a 1975 Jeep and a 1973 Honda CB 500 motorcycle. 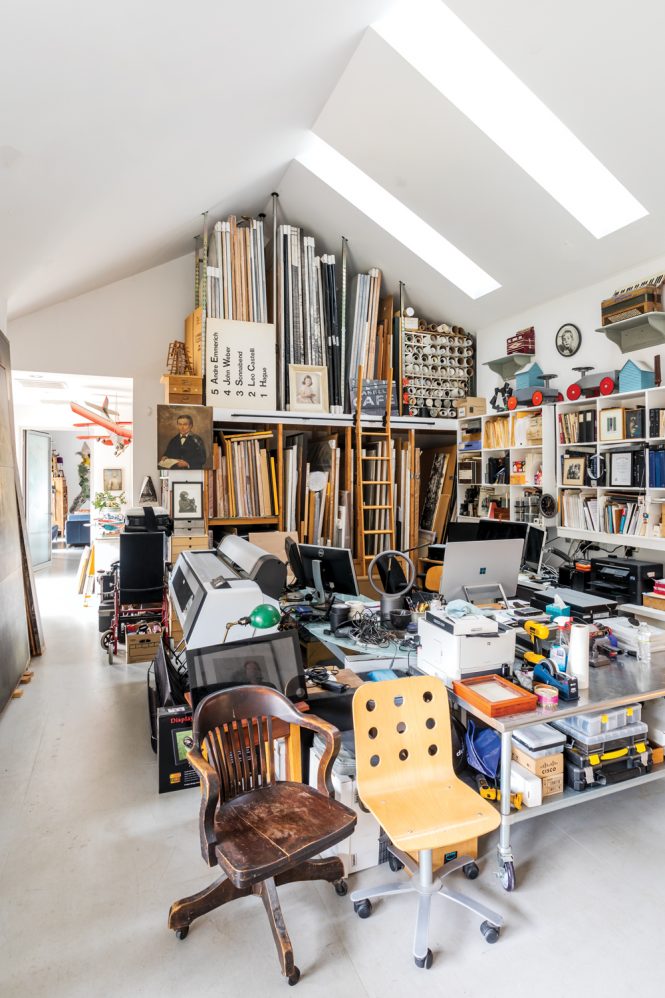 The main space of Keerl’s studio contains storage for his work as well as large-format Epson printer. The doorway leads to a mezzanine looking down on the first floor and a passage to Goldberg’s studio.

A narrow set of stairs leads to Keerl’s studio on the second floor, a large open space (the ceilings peak at 16 feet) that is part photography studio, part rehearsal space, and part archive of his work. Shelves are full of reference materials, framed photos, and folders of papers. A workstation crowded with computers, printers, and assorted electronics anchors one end of the room while a large, abstract self-portrait of Keerl dominates the other. 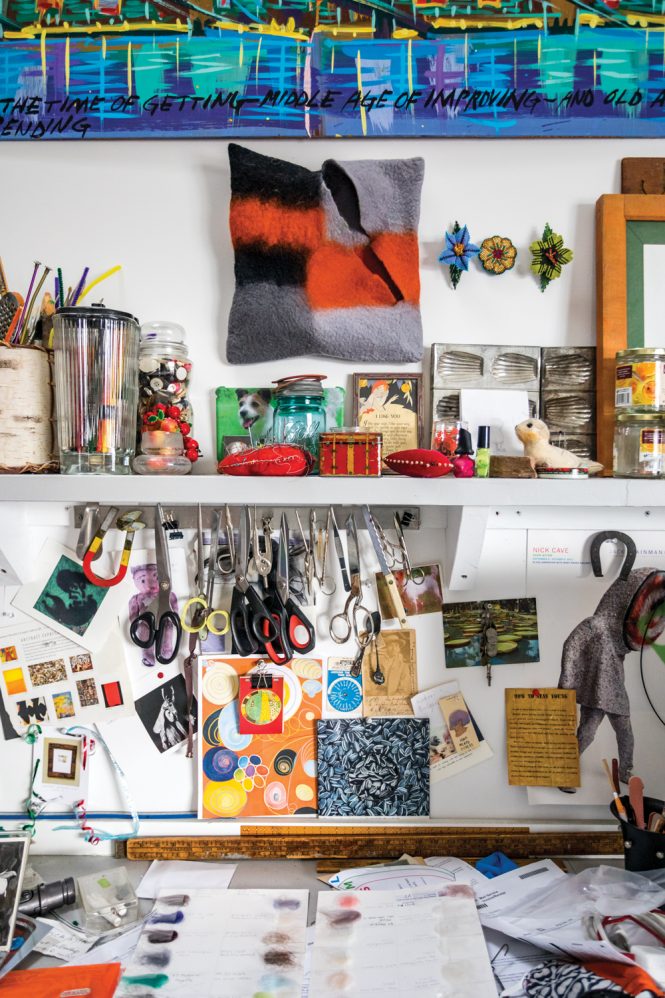 Top: Goldberg’s workbench in her studio contains some of the scissors and tools of the felting trade. Goldberg’s focus is on nuno felting, a technique that bonds loose fibers like wool with sheer fabric like silk gauze, creating felt that’s much lighter in weight than traditional all-wool felt. The process “melds fibers together like dreadlocks,” Goldberg says.

A doorway leads to a mezzanine looking down on the first floor and a passage to Goldberg’s studio. Part of her artistic practice is centered on nuno felting, a technique that bonds loose fibers like wool with sheer fabric like silk gauze, creating felt that’s much lighter in weight than traditional all-wool felt. Area rug-sized pieces are pinned to the wall, what Goldberg calls her “fantasy animal skins.” A bentwood chair by the window is part of a series of everyday objects she covered in bottle caps. 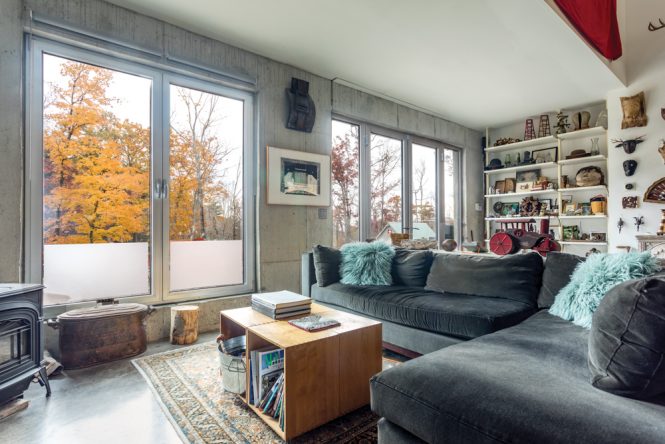 Bottom: The bank of windows in the living room look out on the deck and the forest and creek below. The windows and doors throughout the house were custom-made by Optimum Windows in Ellenville, which specializes in commercial and high-end residential projects.

Goldberg is a consummate collector, and her studio shows off her eclectic taste and sentimental attachment to her items passed down in her family. There’s a taxidermy deer head above the bathroom door. “That’s the nice thing about high ceilings,” says Goldberg. “You can raise up your collections.” A glass fronted bookcase is a pedestal for various objet d’art, including an anatomical cross-section of a head, which once belonged to her father, an ear, nose, and throat doctor and a statue her grandfather picked up on Easter Island. Goldberg also collects bowling balls (“I just like spheres,” she says), many of which are scattered among the rocks off the front deck. She bought the majority of them at a bowling alley in Hancock, but says that she doesn’t come across as many as she used to at yard sales. “They’re getting harder to find because the bowling alleys are closing up,” Goldberg says.

One of Keerl’s current projects is rooted in Cragsmoor’s artistic legacy. Keerl and others in the hamlet are currently planning and fundraising for Cragsmoor Contemporary Arts, a non-profit art center that would include multiple galleries, a library, and small theater forpresenting exhibitions of a wide range of contemporary art, dance, and film.

The no-embellishment minimalism of the home’s interior suits the couple’s overstuffed collecting aesthetic well. The broad expanses of white wall throughout the home cry out for art, and the couple’s collection includes work by David Hockney, Louise Lawler, David White, and Man Ray, along with dozens of paintings by the couple’s relatives (a deep artistic streak runs in their families).

And just as objects and artwork decorate the home’s gallery-like interior, the concrete shell of the home operates in a similar fashion, highlighting the sinuous, chaotic beauty of nature, being a sort of permeable membrane between the wonder of the natural world on the outside and the exquisite human-made objects within. “I love the way concrete looks. It’s very honest and straightforward, Brutalist,” says Goldberg, who didn’t expect to find a material so hard and austere so appealing. “It never occurred to me that I wanted a dream house,” she says, “until we built a dream house.” 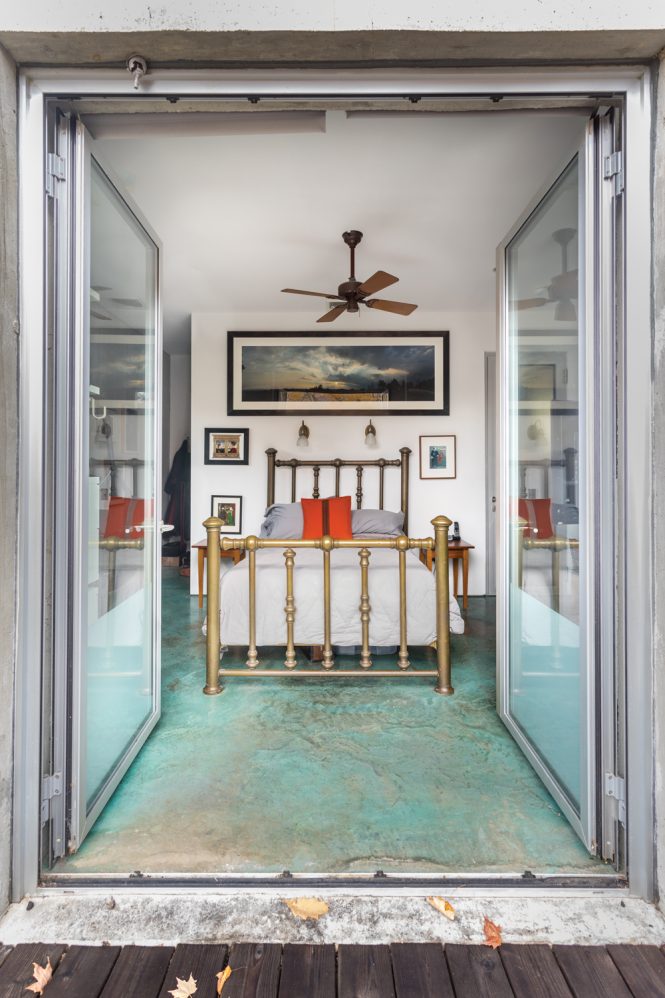 The view of the house’s only bedroom from the deck. The concrete floor in the bedroom is tinted green. “We chose that shade of green to give the room a watery hue,” says Keerl. The brass bed was bought for $100 from an antiques dealer in Milwaukee in 1968. The photo over the bed is an Orange County landscape from Keerl’s Horizontals series. 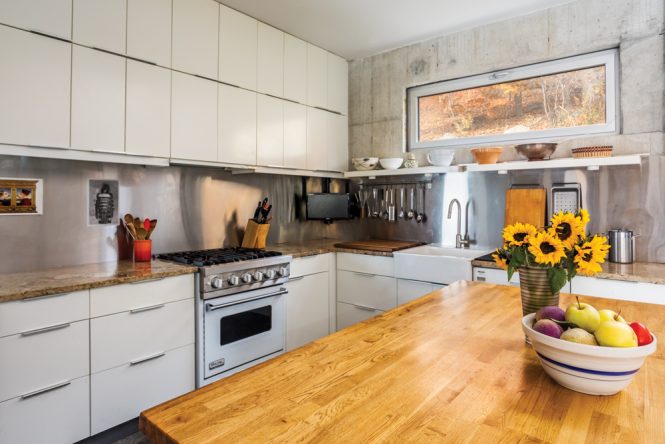 The couple sourced most of their kitchen from Green Demolitions, a recycler and reseller of luxury pre-owned kitchens and renovation items. The cabinets, sink, and island are from Ikea. The granite countertops are from New York Granite in New Windsor.