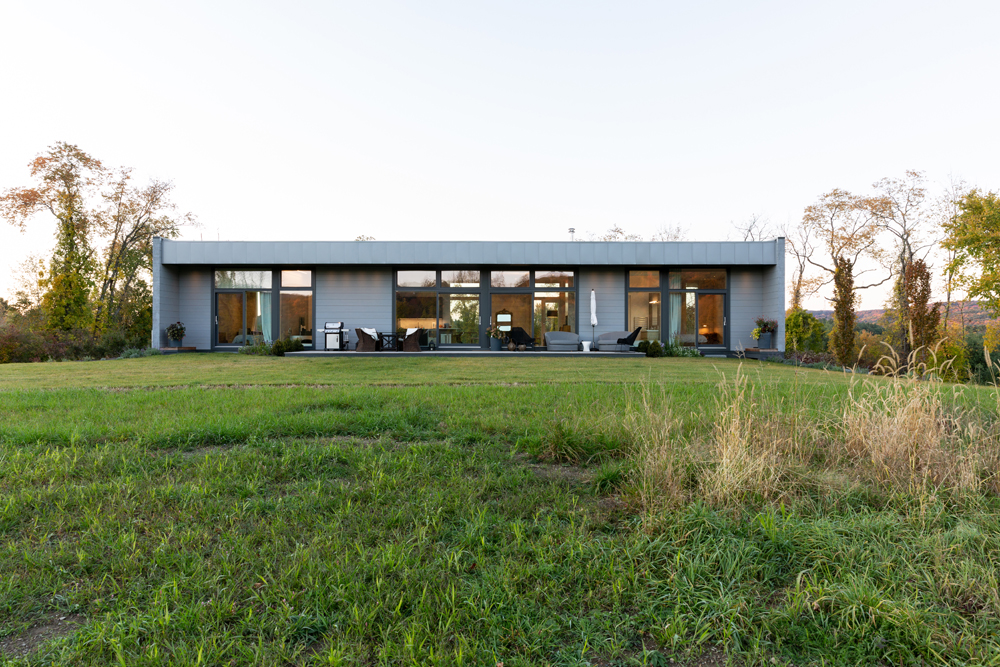 There’s a reason it’s called Hillsdale, after all. Established in the late 1700s and centered around the intersection of what are now routes 22 and 23, the tiny Columbia County town encompasses nearly 50 square miles that undulate with gracefully arcing slopes and folds of rolling knolls.

Positioned on the crest of one of those mounds is Catamount House, a sleek, modern, one-story, 1,680-square-foot, two-bedroom home designed by Grigori Fateyev of Art Forms Architecture. The house is named for the nearby Catamount Mountain Resort, a skiing complex on majestic Mount Fray, which is part of the stunning panorama that surrounds the site. 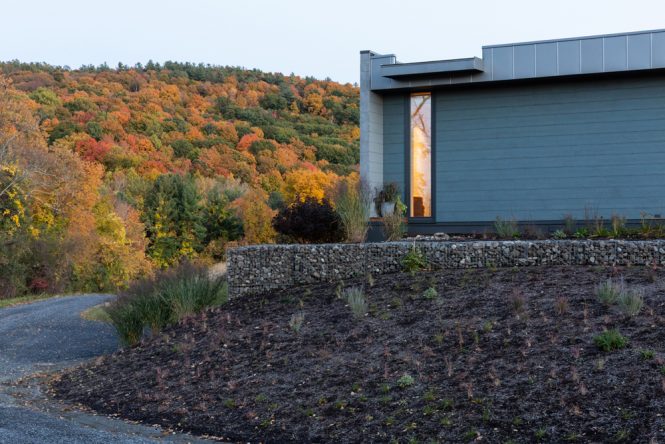 The tall window aligns with a custom roof scupper. A curtain of water falls from the scupper into a catch basin during the rain. Design by: Art Forms Architecture, Construction by: Justin DeBonis Builder. Photo by Lisa Vollmer Photography

“Since I live in town, I drive down the road that goes by the house fairly often, and because of how the windows on each side are aligned you can see right through it,” Fateyev says. “From a certain angle, the house just seems to disappear. It’s kind of amazing, really.”

A signature element of Catamount House’s design is its use of a CLT (cross-laminated timber) log wall system, which combines ancient and modern methods to create an exterior enclosure that’s energy-efficient, airtight, and breathable. Although the CLT practice itself was developed in Germany and Austria in the early 1990s, the logs used were imported from Finland, where they were fabricated by Lumi Polar using a technique that combines smaller pieces of wood; the resulting components are more stable and have cleaner lines than raw, traditional logs. “We created an airtight but breathable envelope,” Fateyev explains. “The air moves through at a micro level, but there are no drafts.” 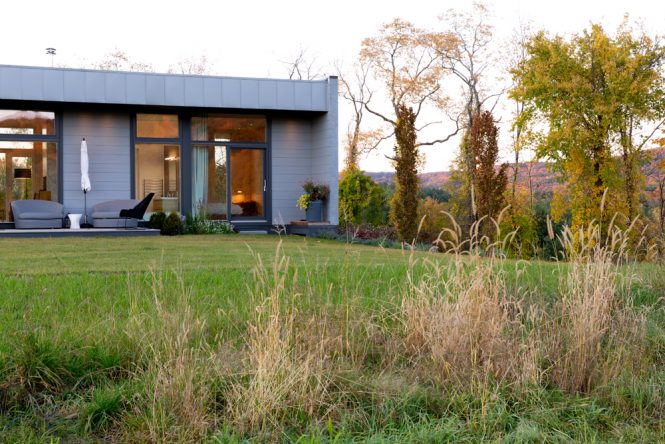 Although the 12-inch-thick pine log walls use no standard thermal insulation, they boast a formidable R-17 energy heat-flow value, while the low-slope rubber mineral, wool-insulated roof caps the warmth-containment factor with a super-efficient R-70 and two Mitsubishi air-to-air heat pumps help to maintain a comfortable climate inside no matter how cold it gets outside. A pale pickled finish to the interior walls gives the home’s living space a light, airy atmosphere that makes the inside feel much larger than it physically measures.

“Yes, it feels very roomy and is very cozy in the winter,” says the client, Ilya Bykov, a New York-based financial, legal, and real estate advisor. “We also put in a cast-iron fireplace that burns small pieces of wood, for added warmth. Before building this house, I didn’t know about Passive House design like [CLT]. It’s all very organic, how it works.”

Looking Out Through a Waterfall

Although Fateyev has designed numerous other residential properties, his notable work on arts facilities, such as the TurnPark Art Space in West Stockbridge, Massachusetts, and artists Tony Thompson and Margaret Saliske’s studio in Hudson, came into play while devising Catamount House’s unobtrusive interior.

“When I was first started studying architecture, I was more interested in theater design,” says Fateyev, who was born in Saint Petersburg, Russia and attended Cooper Union. “But after going through the unique curriculum that I studied, I guess you could say I emerged a different butterfly. I realized that the eye is perpetually aware, so with art spaces I understood that the best ones are the ones that ‘fade away’ when you install the art in them. I saw that with this house the idea was that the ‘art’ is the environment that surrounds the house, and so we wanted to guide the eye to that. We designed the house specifically for the site. It’s perched on a knoll, and the landscape around it falls away, so it feels like it’s sitting on a little mountain. When it rains, the position and flow of the metal fascia and scuppers next to some of the windows make it feel like you’re looking out through a waterfall. It’s really special and beautiful.” 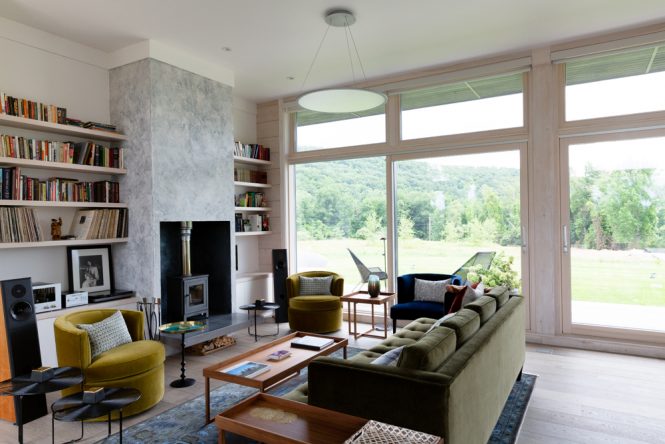 In contrast with whitewashed log surfaces, the interior walls are made of painted gypsum. The wood stove flanked with bookshelves anchors the living room side opposite the kitchen. Photo by Lisa Vollmer Photography 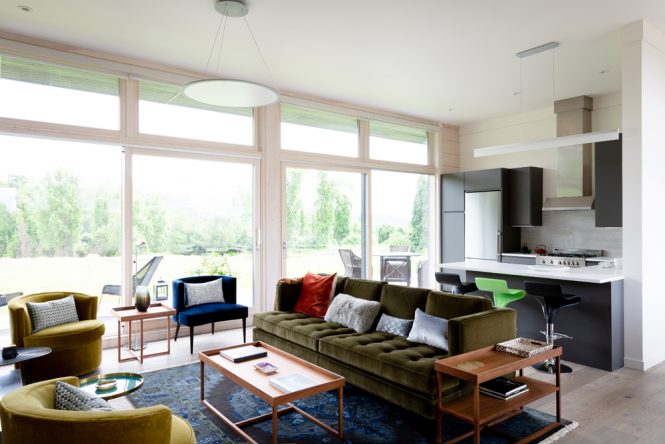 The open-plan living room/kitchen flanked by a wall of windows. Photo by Lisa Vollmer Photography

Essentially a custom-designed modular home, most of the project’s materials were shipped to the site via container from Finland by Lumi Polar. To help oversee construction, the manufacturer even sent a representative—who happened to speak fluent Russian, which, being both Fateyev and Bykov’s native tongue, was very convenient.

“The build took about a year, mainly because of the shipping delays with materials in general,” says Justin DeBonis of Hudson-headquartered construction company DeBonis LLC, which assembled the house. “I’d never really done anything like this before, but it really turned out great. Even though it was basically prefab there were some things that had to be fabbed up, like the interior walls: I framed those with wood and used slotted metal tracking where the walls meet the ceiling, to allow for shrinkage to the log walls over time, and metal levelling across the trusses. The drywall hanging was done by a company out of Albany called Upstate Acoustical Corporation, which is run by Bob Williams. With the original kit, the basement was supposed to be very minimal, really just a place for storage. But Grigori and Ilya decided to make it part of the living space and kept adding to it, and it just kept getting nicer and nicer as we worked on it.” 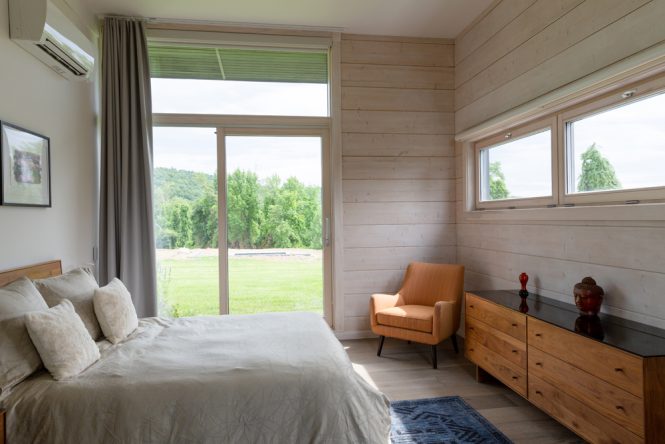 The whitewashed log walls define the perimeter of the building. The windows function in specific ways, balancing the need for privacy and connection to the outdoors in front of the bedrooms. Photo by Lisa Vollmer Photography

The low-slung, rectangular, shoebox-like structure has a basement level containing a two-car garage, two multipurpose rooms (currently outfitted as guest rooms), a steam room, and a home theater/screening room. The lower level mirrors the square footage of the ground floor and utilizes an ERV (energy recovery ventilation) system, which exchanges the energy contained in the normally exhausted air of a building or conditioned space, using it to precondition the incoming outdoor ventilation air. 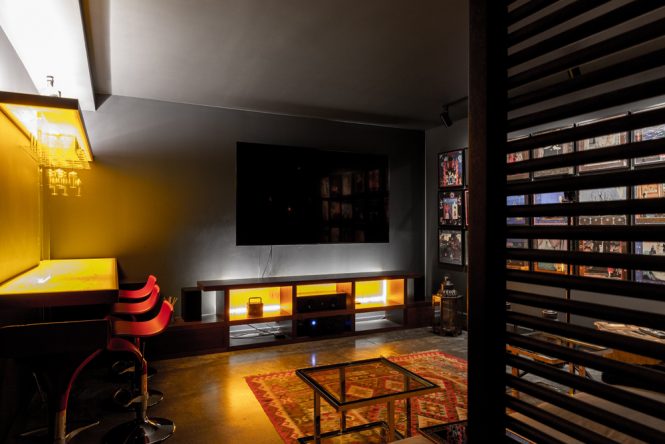 In contrast with the lightness of the main level, the basement spaces, specifically the screening room, are finished in dark tones with splashes of color from paintings, back-lit onyx counter, and an antique rug. Photo by Lisa Vollmer Photography

“The basement is finished in dark colors and has ambient lighting, which gives it a very sexy feel,” says Bykov. For maximum privacy, the upper floor’s two bedrooms are situated at opposite ends of the house’s spacious open-plan living area, which is lined with triple-pane, high-efficiency, floor-to-ceiling, metal-clad windows with lift-and-slide components made by Pro-Form. 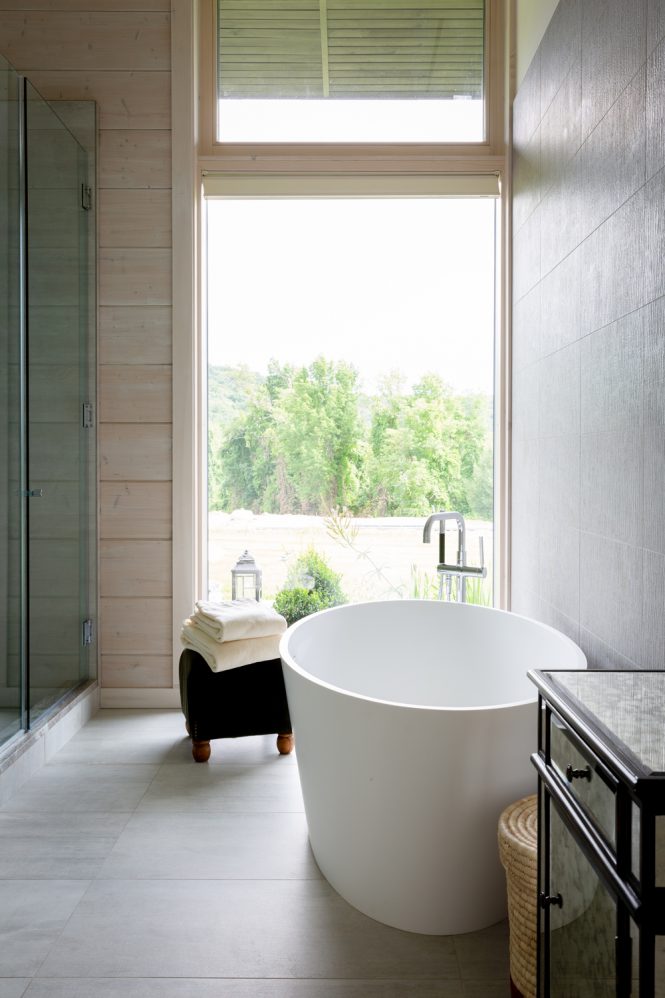 The soaking tub is at the center of the primary bathroom, opposite the window to a private garden. Photo by Lisa Vollmer Photography

Echoing the Scandinavian, put-together-kit origins of the house itself is the kitchen cabinetry, which was sourced from Ikea. A large, U-shaped kitchen counter/sink area is illuminated after dark by recessed lighting and an innovative hanging fixture made by WAC Lighting.

During the day, the space is brightened by the natural light coming in through the eight-foot-tall, two-inch-thick glass sliders that access the large patio, which offers ample seating for seasonal entertaining. One of the major challenges of the construction, says Bykov, was the installation of the home’s well and sewer system, which was made difficult by the rural spot’s rough, stone-laden soil and totaled $50,000 upon its completion. 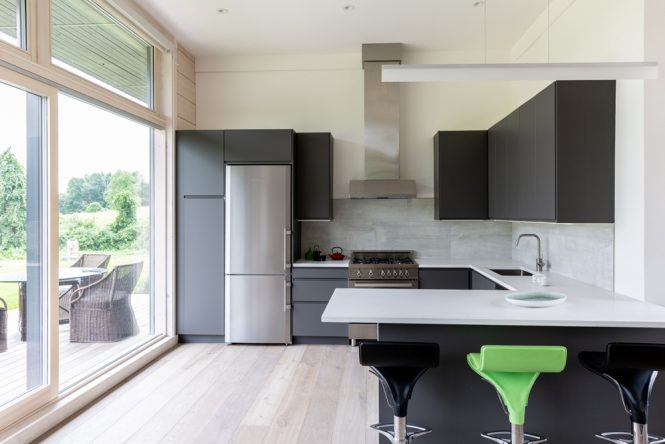 The lift-and-slide doors in the kitchen and living room open onto the south-facing deck, protected from sun and wind with a deep soffit overhang and sidewalls. Photo by Lisa Vollmer Photography

Catamount House is located on the edge of the 40-acre property where the owner originally commissioned the home to be built as a guest house/caretaker’s cabin. With the advent of COVID, however, he’s taken advantage of the urban flight among New York’s well-to-do, renting out the house and seeing very healthy returns on his initial investment. “For the first year, I was able to rent it to a family from the city for $10,000 a month,” he says, adding, with a tone of further disbelief, “but then they moved out and bought their own local house, and I’ve since been renting it to another tenant family for $12,000 a month. They really love the house.”

Viewing this gorgeous and distinctive Hudson Valley home, it’s certainly easy to understand why they do.