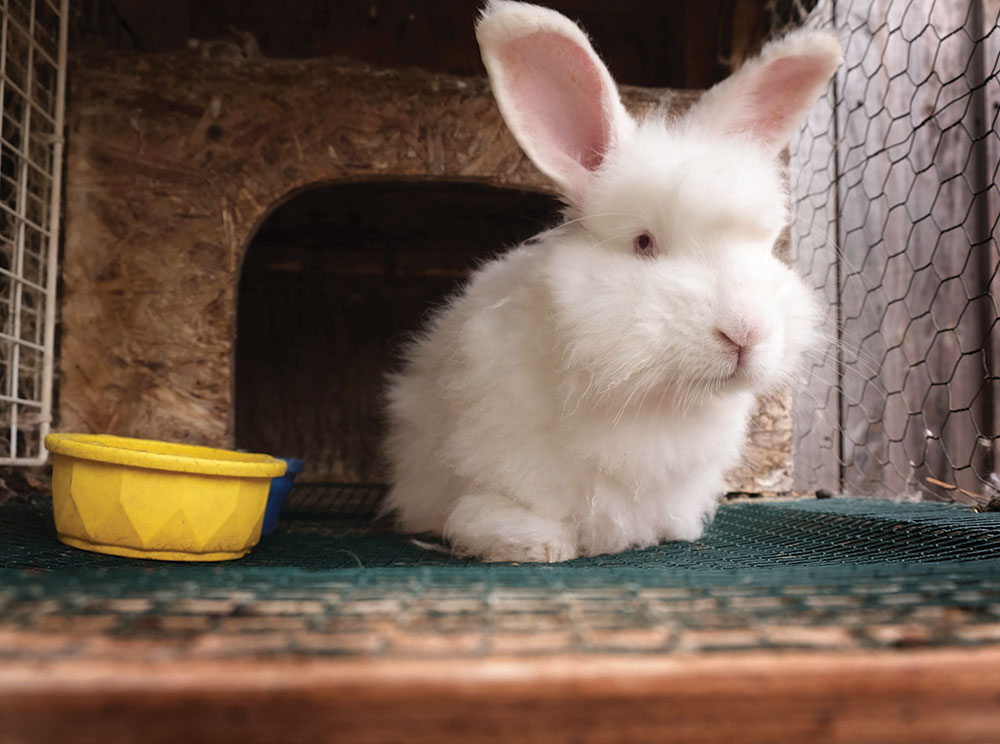 As Tina Harp gazes at her knitting machine, with its countless little metal teeth, her face simultaneously conveys respect and annoyance. The machine is billed as a device that can make a sweater in a day, so it makes sense that a professional of her caliber would have one in her yarn and fiber studio. But it’s clear that, despite its power and possibilities, the knitting machine—on which Harp says she receives lessons from her mother—is not where her heart is.

“It is really complicated,” Harp says. “It takes me probably less time to knit things by hand because I’m much more efficient.” However, she confesses, she could end up saving some time with the machine “if I could just learn how to follow directions.”

Harp’s chilly relationship with her knitting machine is symbolic of her general attitude toward her farm and her life: Keep it uncomplicated, or else it becomes a hassle. “Things have to be simple and easy to keep going with the flow,” she says, “because otherwise there’s too much to do.” 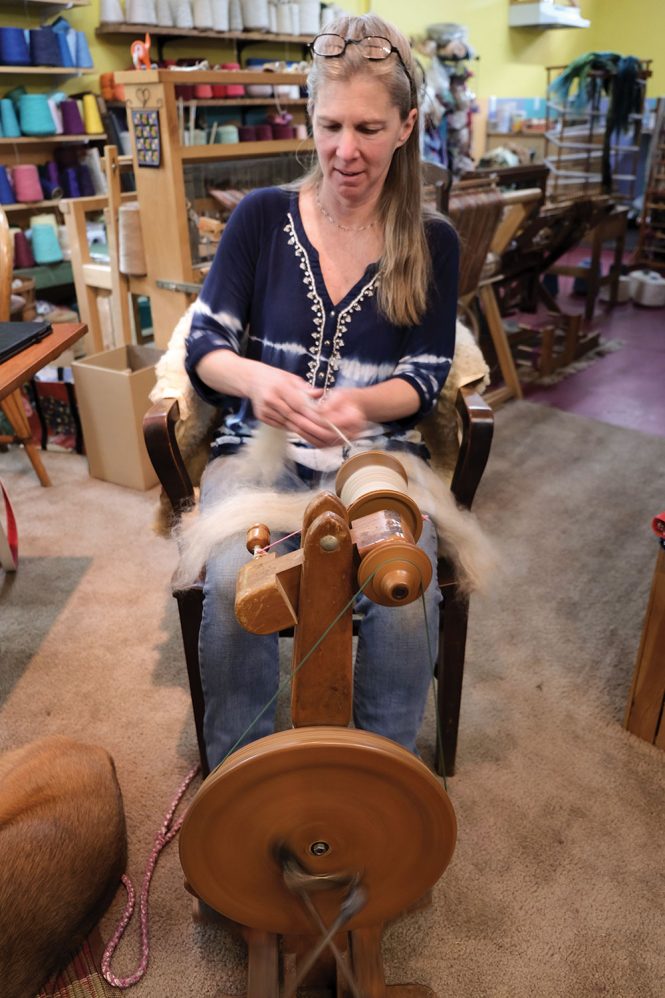 Tina Harp at work in her studio.

A skilled craftsperson who dyes, spins, and knits wool, Harp operates Mountain Yarns Fiber Arts Studio out of her home in Shandaken, Ulster County. Set on a three-acre farm along the Bushnellsville Creek at the edge of Catskill Park, it’s where she also holds workshops and kids’ camps, with the studio and store open to visitors 10am to 4pm on Friday, Saturday, and Monday.

In 2013, Harp lost her house to an electrical fire (no humans or animals were hurt), and chose to rebuild on the same exact spot: streamside. Her family moved into the new house in February 2014, she says, and “after that ordeal is when I decided that one never knows what life has in store for us.” That’s when Harp’s farm truly began to take shape.

Pre-fire, she had chickens, ducks, and turkeys. Post-fire, she added a couple of goats. Then a cow. Then a donkey and a horse. On the domestic end of the animal spectrum, Harp has six dogs and an Angora rabbit as well as her fiercely loyal, vocal companion, Sid the cockatoo. 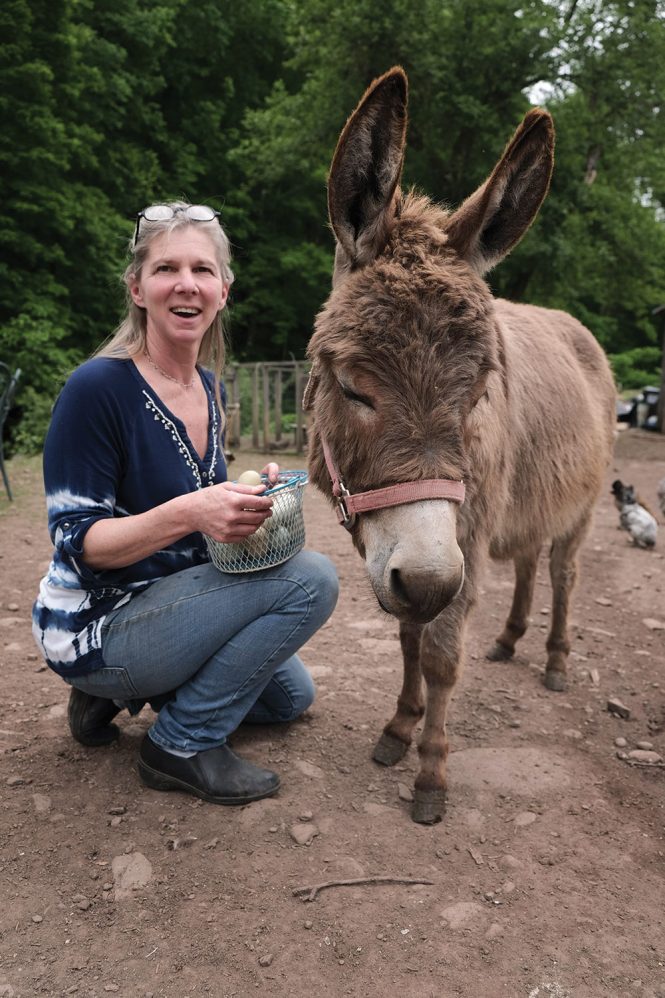 After gathering fresh eggs, Harp converses with her donkey.

From the driveway, her home is cozy, unassuming, and could pass for any other on the street. But beyond the gate, a slice of mountainside homestead heaven materializes: a barn and outbuildings, a friendly greeting from the cow, a patchy hillside leading to the creek.

Harp says that gazing at the animals milling about, the stream rolling, and the seasons changing, whether outside or from the comfort of her ground-level studio, brings her immense pleasure. Her property emanates a warm, distinct feeling of family among both two-legged and four-legged residents. Each day she rises at 5am, drinks her coffee and heads into the barn by 6am for milking and feeding. By 7am, she’s retreating to her studio to tend to her life’s work: spinning and weaving wool, much of which she acquires locally, and all of which she dyes by hand.

As she moves about her studio, grabbing piece after piece, painstakingly describing the process to achieve the right color, feel, and look for each hat, rug, or blanket, Harp’s consummate passion and expertise are on full display. When she talks about her life on the farm, her animals, the delicious goat cheese she just made, or especially her grown children (Josh, 23, and Rachael, 21, live with her; Gabrielle, 25, lives in nearby Margaretville), she emits a different vibe: content, and wanting for nothing. Farm life satiates her love of animals and provides her with food. It’s just enough. 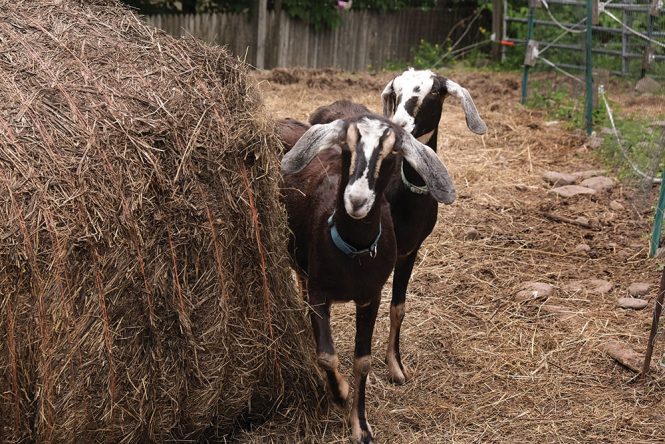 The goats take note of the visiting photographer.

Harp’s affinity for weaving was a birthright of sorts, inherited from her mother—despite the fact that she was the only one of six children who took to it. While growing up in nearby Glenford, Harp was responsible for grooming her mother Sonja’s standard poodles when she was a child. When her mom eventually acquired angora goats, she assumed Harp could groom them as easily as she did the dogs.

“She gave me a wheel and a fleece and said, ‘When I die, you’re going to have to learn how to do all this stuff. These goats are going to be yours,’” Harp recalls. Twenty-five years later, those goats are long gone, but Harp’s shearing skills have grown into a full-blown passion for spinning, weaving, crocheting, knitting, and dyeing yarns and fibers. Her mother, who still lives in the Glenford home where Harp grew up, visits Harp’s farm weekly to sit and knit with her daughter and her guests; Harp, for her part, has passed her skills on to her own kids. 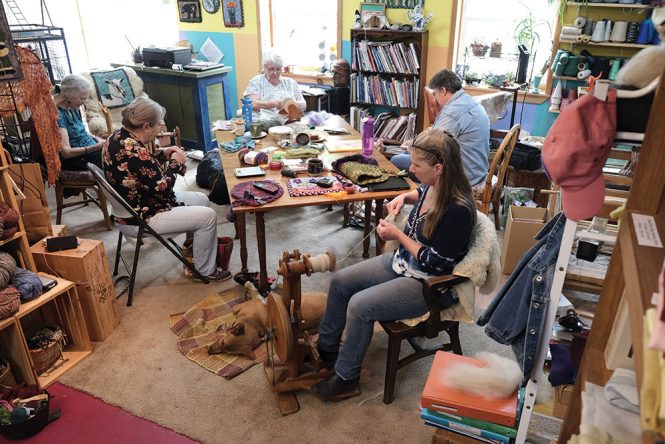 Harp not only teaches fiber arts, but also opens the studio up for informal working and visiting.

Beyond her devoted following of repeat customers, selling at shows four or five times a year, and taking select custom jobs (like for a Woodstock woman who commissioned a blanket made with the hair of her dogs, which Harp blended with similarly colored wool), it is obvious that Harp holds a special place in her heart for inspiring others with her workshops. She spends a great deal of time prepping for her classes, and holds her students to the same high standards to which she holds herself.

“I explain things very well,” she says. “If I’m teaching you how to braid a rug, I’ll say it 14 different ways until you understand it. Comprehension is really what we all have trouble with. It’s not that the directions are so hard.” 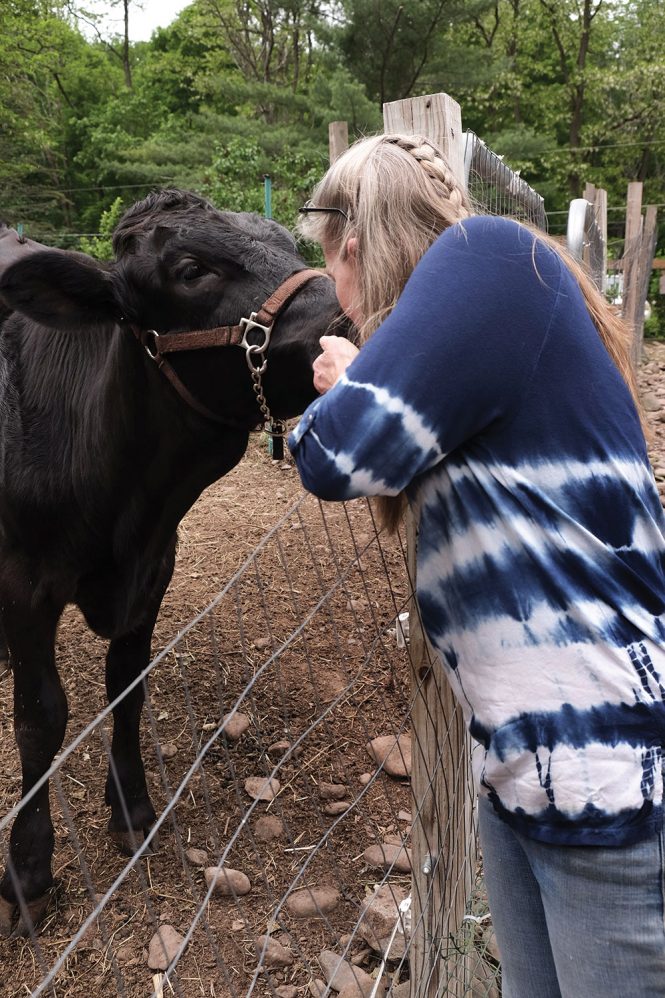 Harp gets a friendly greeting from the resident cow.

Her workshops and love of good company have also inspired her to think of new, creative ways of bridging the gap between the farm and her studio. In June, she held her first “It’s All About Goats” workshop. Participants spent the day making goat cheese, soap, and yogurt, and then baked a quiche with the cheese they made. She has also begun hosting “Hooking the Farm” workshops, at which she spends the day with her students hooking rugs—which is her favorite technique to teach—inspired by black-and-white photographs she has taken of her animals.

“I love my days,” Harp says. “I’m really the luckiest person. I get to play all day.”