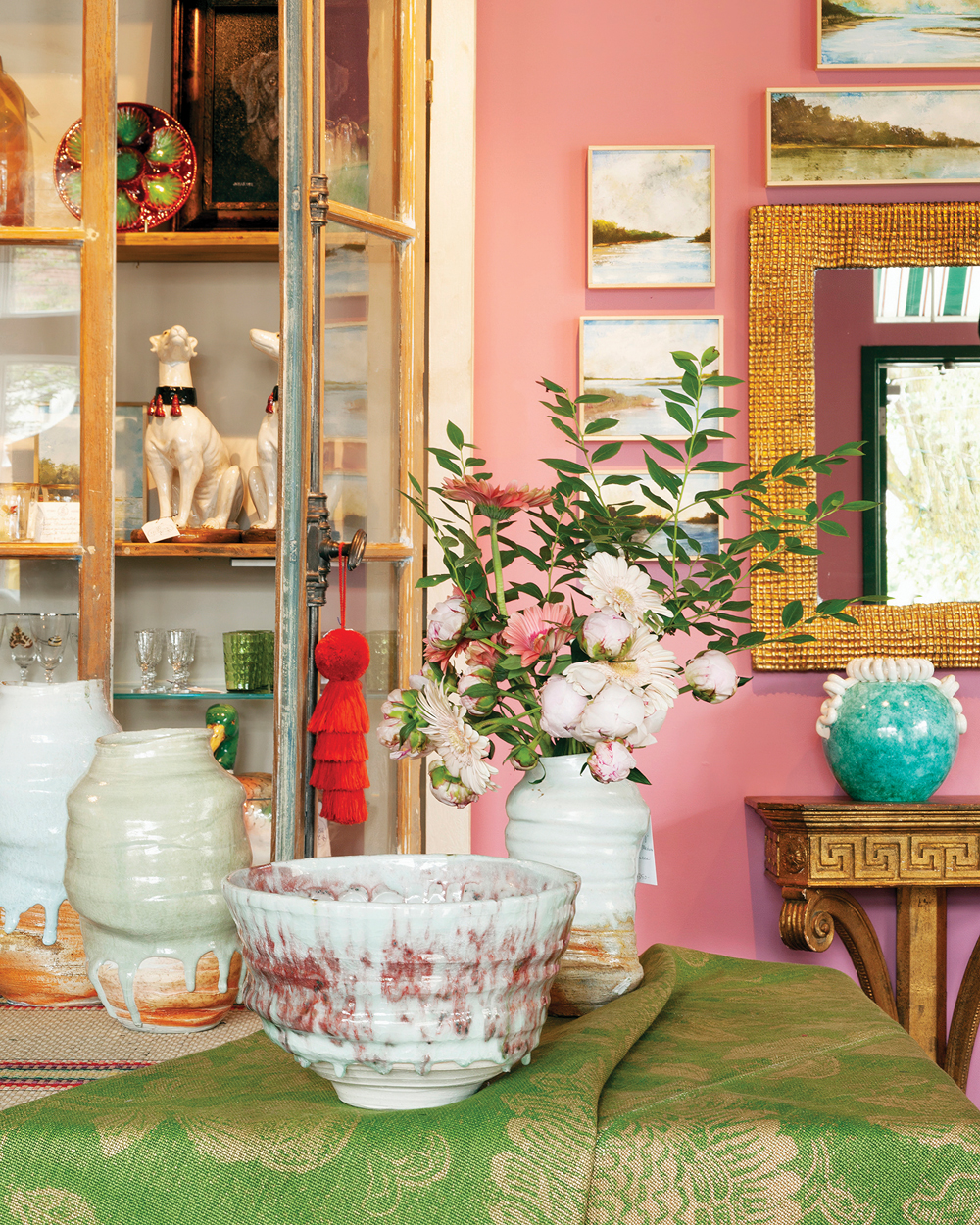 Gathering, as in both collecting and coming together, ranks among the favorite pastimes of a trio of new business owners in Rhinebeck. And if the chaos surrounding the past two years cultivated the seed for Studio SFW—a New York-based architecture and interior design firm that sprouted in January 2021—then robust (and decidedly Southern) roots caused its principle creatives to converge upon a shared mission: to bring lived-in luxury to interiors and lifestyle projects, no matter the zip code.

To date, the aesthetic influence of Rachael Stollar, Erin Fearins, and Ward Welch spans the myriad miles between Manhattan and Rhinebeck, where House SFW, their newest gem of a collaboration, offers upstate homeowners a delightful edit of their most favorite things—for the home.

“It’s about trying to be welcoming and inviting [while] layering the space enough that people feel comfortable—nothing is too precious, but everything is special,” explains Welch. 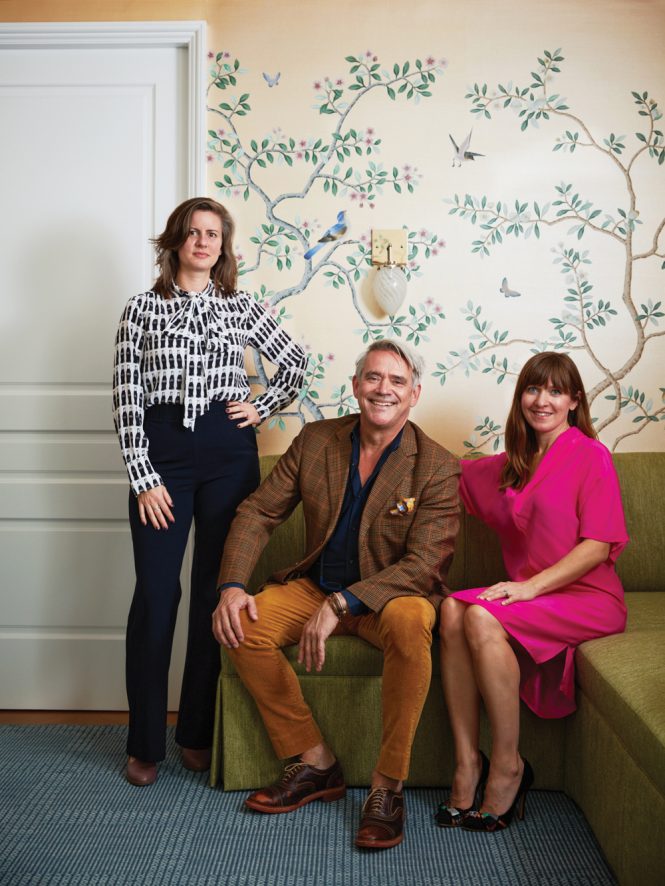 “And has its own story,” interjects Fearins, who speaks to her colleagues’ shared commitment to bringing “that storied life of things,” that imbues otherwise commercial goods with personal meaning, to clients and customers alike.

The team brings a hands-on approach to design implementation, inspired by their respective, rural upbringings south of the Mason-Dixon line—and each brings something distinctive to the table. Fearins grew up scouring east Tennessee for vintage memorabilia, the kind on display at her father’s fully restored vintage gas station, innately inspired by the consummate “lifelong collector of things.” 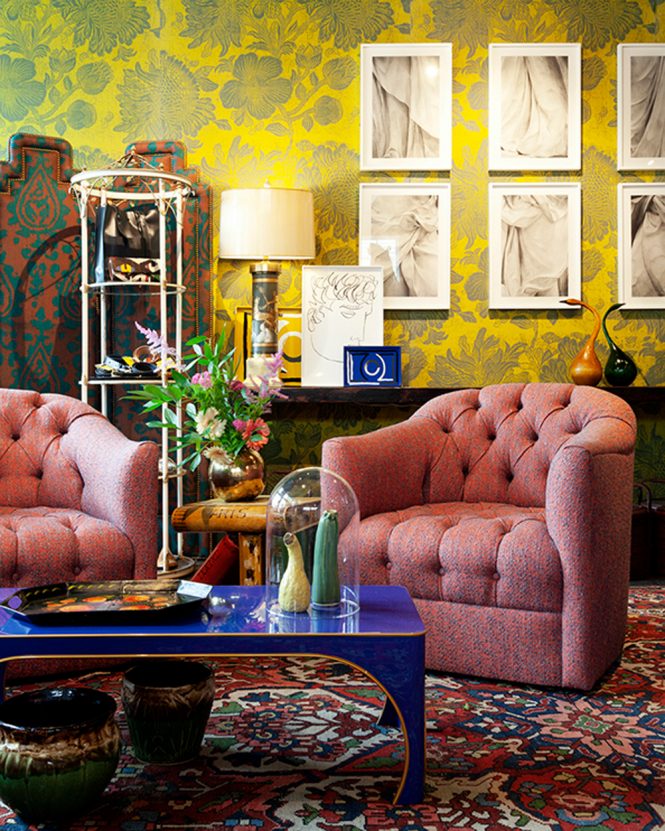 “The store is meant to feel like a room that is expertly appointed with layers of color and texture to inspire both the trained design eye and the casual observer” says Rachael Stollar. This set of swivel chairs is upholstered in a Métaphors fabric called Zanzibar Cayenne. The tufted detailing is reminiscent of a mid-century design. “We wanted the chair to be quite tailored but also incredibly comfortable which is sometimes difficult to achieve in a larger scale chair.” says Ward Welch. The Dutch Canal House Screen (in the photo with the swivel chairs) features a stepped top with Ted Tyler Indiene fabric. The Federalist House Screen (pictured in rear) has a straight top with Ted Tyler Pineapple fabric.

Stollar developed a penchant for antiquing in West Virginia’s “hole-in-the wall shops,” chock-full of rare finds; this, coupled with “the sense of gathering” absent from her upbringing, urged her on to create spaces for friends and family to converge. Welch, who grew up on a farm in West Virginia’s tobacco country, ultimately came to appreciate architecture in the massive, albeit deteriorating, Victorian homes around town. Each of these individual experiences fed their collective desire to eschew the new and seek out everyday objects that tell a story.

“There’s just so much out there that is wonderful and beautiful and should be used as opposed to thrown away,” Welch says of an approach reflected in the carefully curated collection at House SFW. Since opening in July 2021, the imaginative new retail showcase has piqued the curiosity of locals and tourists alike. 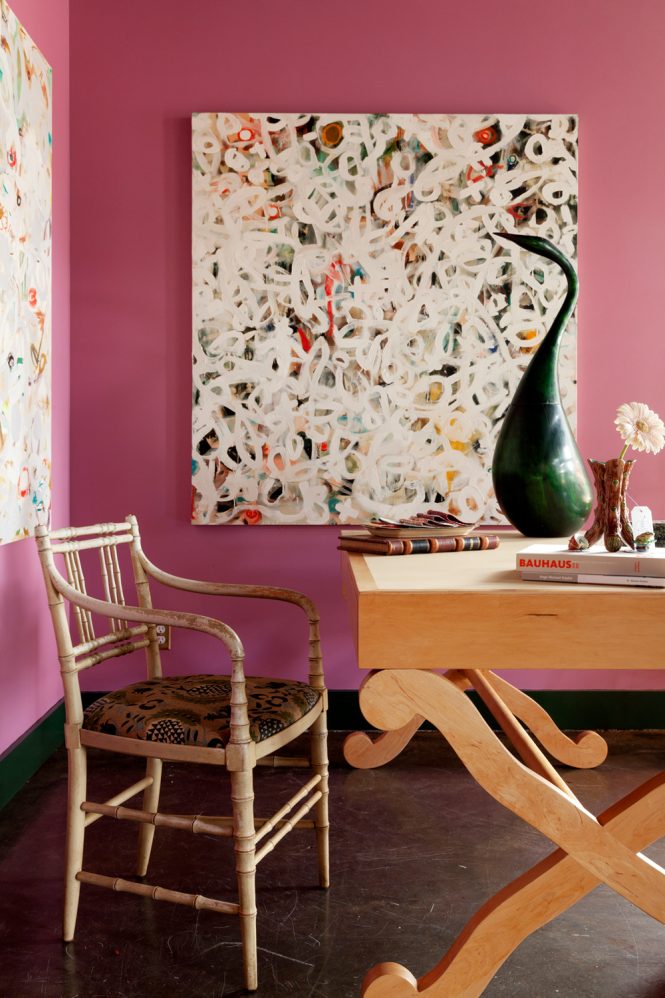 A New Appreciation for Timeless Finds

“Oh, my mom had one of those,” is an oft-repeated phrase heard around the shop—one Stollar hopes will evoke “a new appreciation” for how certain timeless finds, when placed in a new context, become “instantly relevant” again.

During the pandemic, Stollar retreated to Rhinebeck. Several vacant storefronts beckoned, presenting an opportunity to get involved in the downtown retail culture. “[Unlike] other upstate towns, [Rhinebeck] is not just for weekenders,” Stollar said, citing the allure of a community where kids attend school and individuals are involved in what’s happening, as creating a palpable sense of momentum. 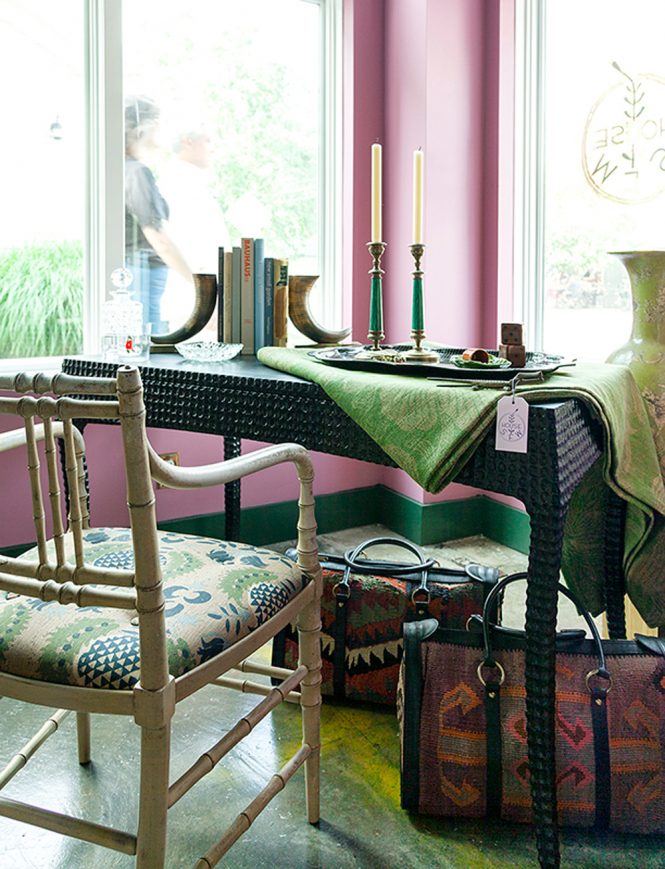 A visit to House SFW is akin to a discovery journey, the kind one might take while visiting a friend’s home and studying their menagerie of things. “When objects are arranged in a certain way, things [inevitably] catch your eye,” said Stollar, pointing to a wide array of wares including fun fruit- and veggie-shaped Limoges boxes and mini cocktail shakers, platinum-rimmed wine glasses, and covered soup tureens. There’s newly imagined taxidermy, lamps and furniture gleaned from the many great artists, fabricators, and vendors with whom Stollar, Fearins, and Welch have created relationships over the years.

“We try to be thoughtful about who each of our clients is and to bring things to them that help them build on, or start to tell, their own story,” says Fearins, who underscores there is no one-size-fits-all approach to design or decorating. This gets tricky when building a brand, which is why certain items—like upholstered pieces of their own design—are being made in Brooklyn and peppered throughout the store as a signature of sorts. 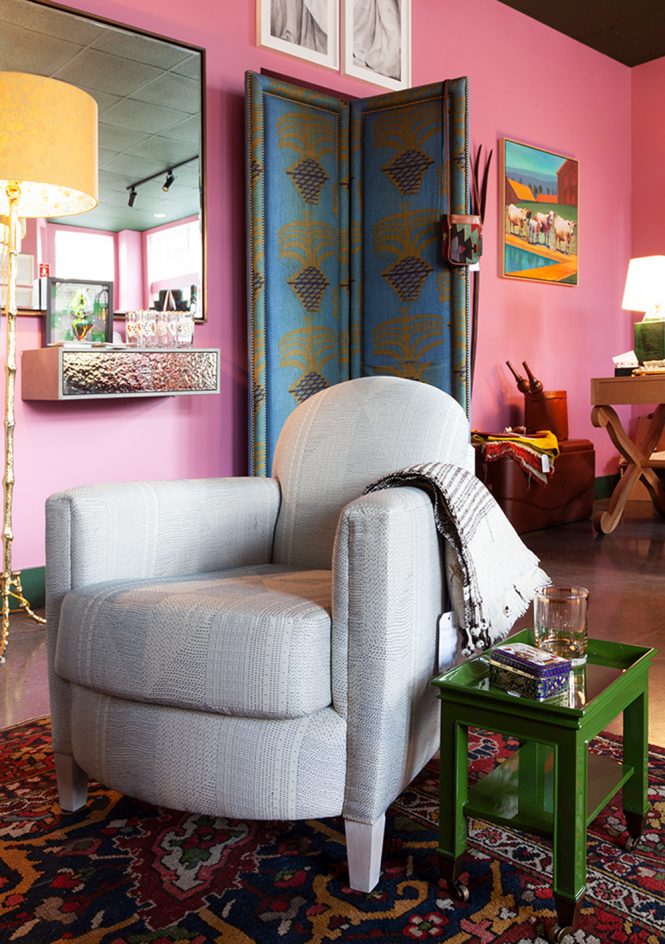 In the absence of proper entertaining (and we’ve all experienced the dearth), setting a beautiful table gives the notion of something grand and inviting—call it a Southern sense of graciousness, if you will.  And this, at the end of the day (literally!), is what Stollar loves most about the change of pace synonymous with being upstate: “[The ritual of] hanging out, having people over, and setting the table for dinner every night—I love that.”

Inspired to deck your dining hall (or communal living spaces, for that matter) with something swoon-worthy? Head to House SFW, in Rhinebeck’s Montgomery Row, where a panoply of tableware—including porcelain French knife rests (yes, people are using them again!) and other nostalgia-evoking rare finds—awaits. 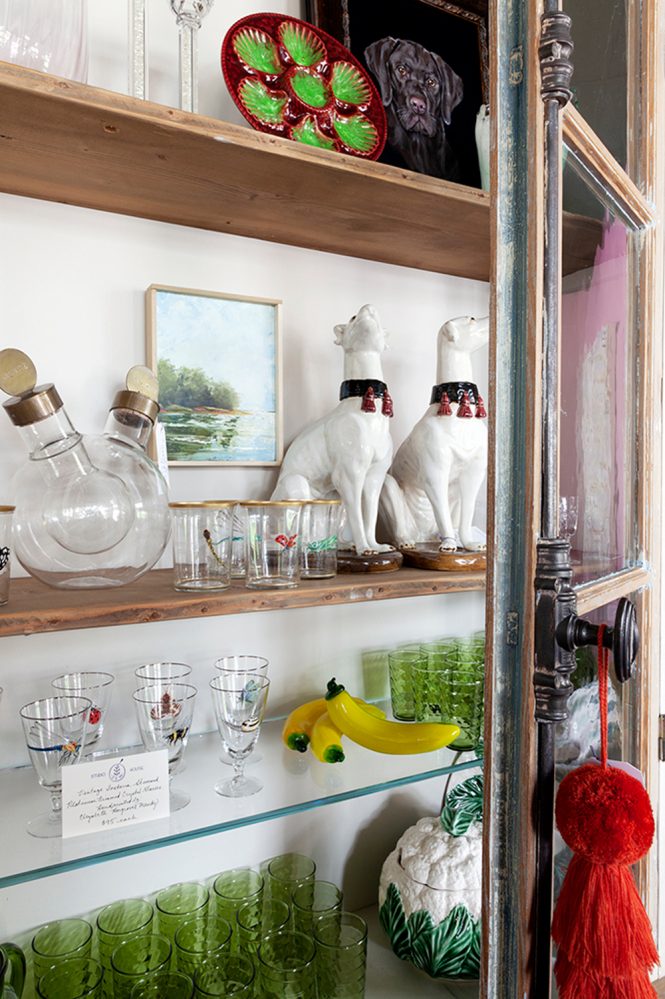