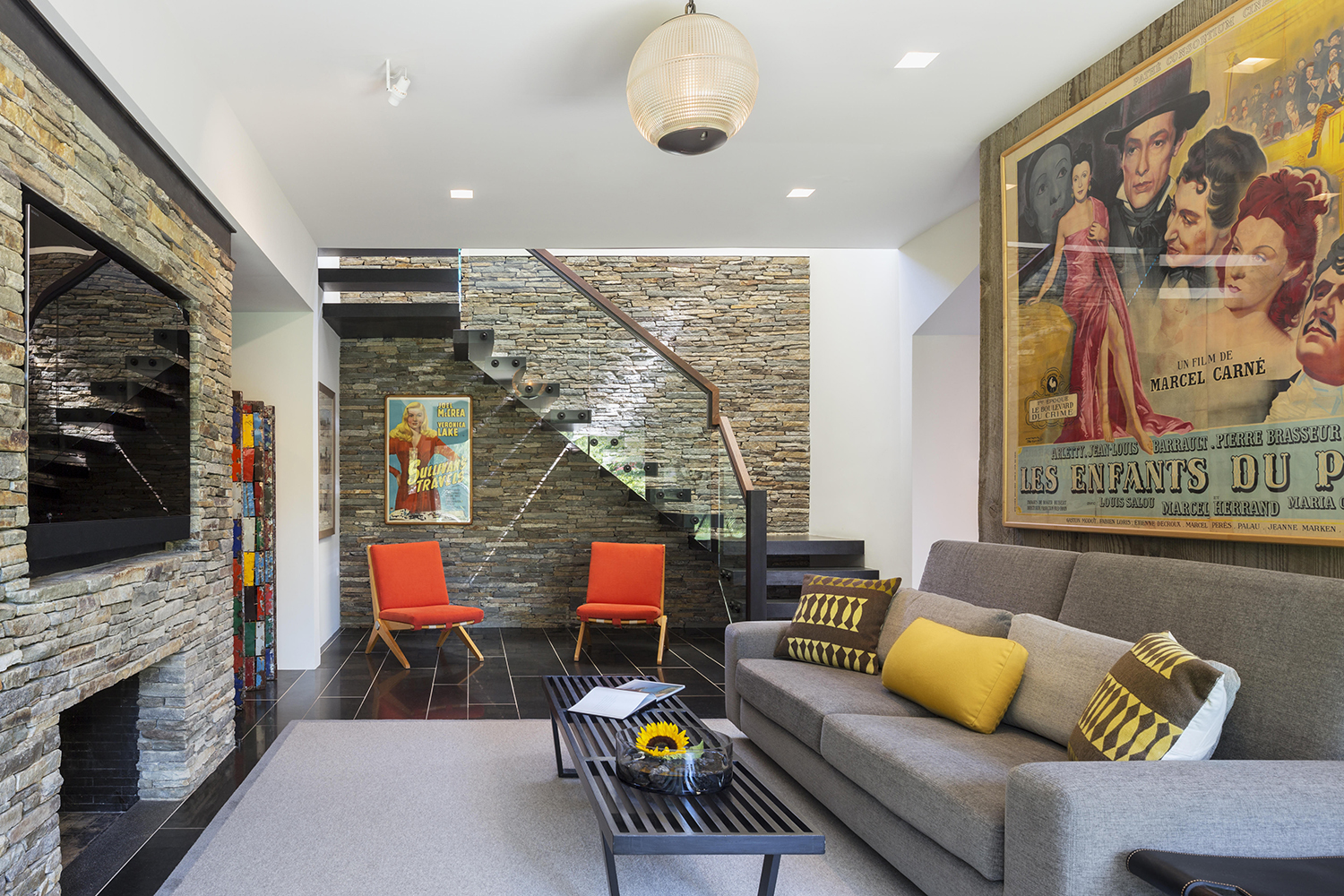 In the early 20th century, American businessman and philanthropist Hiram Halle bought and restored 33 houses and other buildings in Westchester County’s Pound Ridge. Thirteen of these structures are now listed in the National Register of Historic Places, including a 19th-century former cow barn. Now known as “Hobby Barn,” the structure became a community center of sorts in the 1930s, when Halle, who was dedicated to Jewish causes throughout World War II, brought in European Jewish exiles to complete the work and reside there. The structure has been occupied and remodeled by subsequent residents ever since.

But the current homeowners, who bought the property in 2000, decided to put their own aesthetic into the mix—honoring the historic American barn style, infusing the space with a clean, modern feel, as well as designing additional space in the guest wing. Bedford-based architect Carol Kurth suggested literally raising the roof, creating a two-story entry hall and a large family room on the second floor above a garage, where the owners would spend much of their time.

“The house has had many different iterations,” says Kurth. “Our clients requested that the one-time children’s playroom next to the restored garage be a cozier, more sophisticated adult space. When we got to the project, there was a fireplace with a smaller TV and some stonework surrounding it. We revised the stonework, replaced the TV with a larger screen, and repeated the stacked stone in the wall behind the new staircase. Stone walls are indigenous in this area. We wanted to incorporate that concept into the house, almost blurring boundaries by bringing the outdoors in with the stone.”

A bumped-out stairwell was added at one end of the room. “Behind the stone wall is an entire steel structure that supports the cantilevered staircase,” explains Kurth. “The stair itself, coming out of the stone, is made of steel encased with a granite sleeve. With the idea of a floating staircase, the walnut-topped glass rail concept came into being—it was a complicated piece of engineering.” Filled from light from above, the stairwell expands the space and invites exploration.

The homeowners collect vintage movie posters and Midcentury-Modern pieces. Using the colors of the posters as inspiration, Kurth “added pops of color around the room: the orange chair covers; yellow cushions; and the colorful folded divider, also vintage,” she says. “Part of the design work was focused on incorporating the art, such as placing the chairs and another poster under the staircase. And we built in that niche next to the fireplace to house the vintage room divider.”

The wall behind the sofa, which features the largest of the movie posters, was covered in reclaimed wood, the same wood used to clad the building’s exterior. “There’s a lot of use of steel, mixed and juxtaposed with other elements in a more modern way,” says Kurth. The floor is made of black granite, partly covered with a custom carpet that matches the sofa; the globed light fixture is a reclaimed piece. “We used these antique globes—1920s industrial pieces—as a theme repeated in other areas of the house.”

Kurth notes that Halle was ahead of his time in scooping up older, sometimes declining properties in the area to restore and renovate them. Among those properties, Hobby Barn was the star: Not only was it saved and improved but it became a place for people to congregate and socialize, as Halle was a collector of diverse friends and business associates  as well as buildings and artworks. Apropos, the current homeowners are “loving conservators with vision,” adds Kurth. “In this case in particular, the clients have honored the history of Hobby Barn, while having the new architectural design reflect their personal needs.”

The renovation of Hobby Barn, completed five years ago, has been recognized by the Pound Ridge Historical Society’s annual Modern in Pound Ridge Exhibition. But, most importantly, it created a casual, comfortable space in which the homeowners find themselves endlessly welcomed, says Kurth.