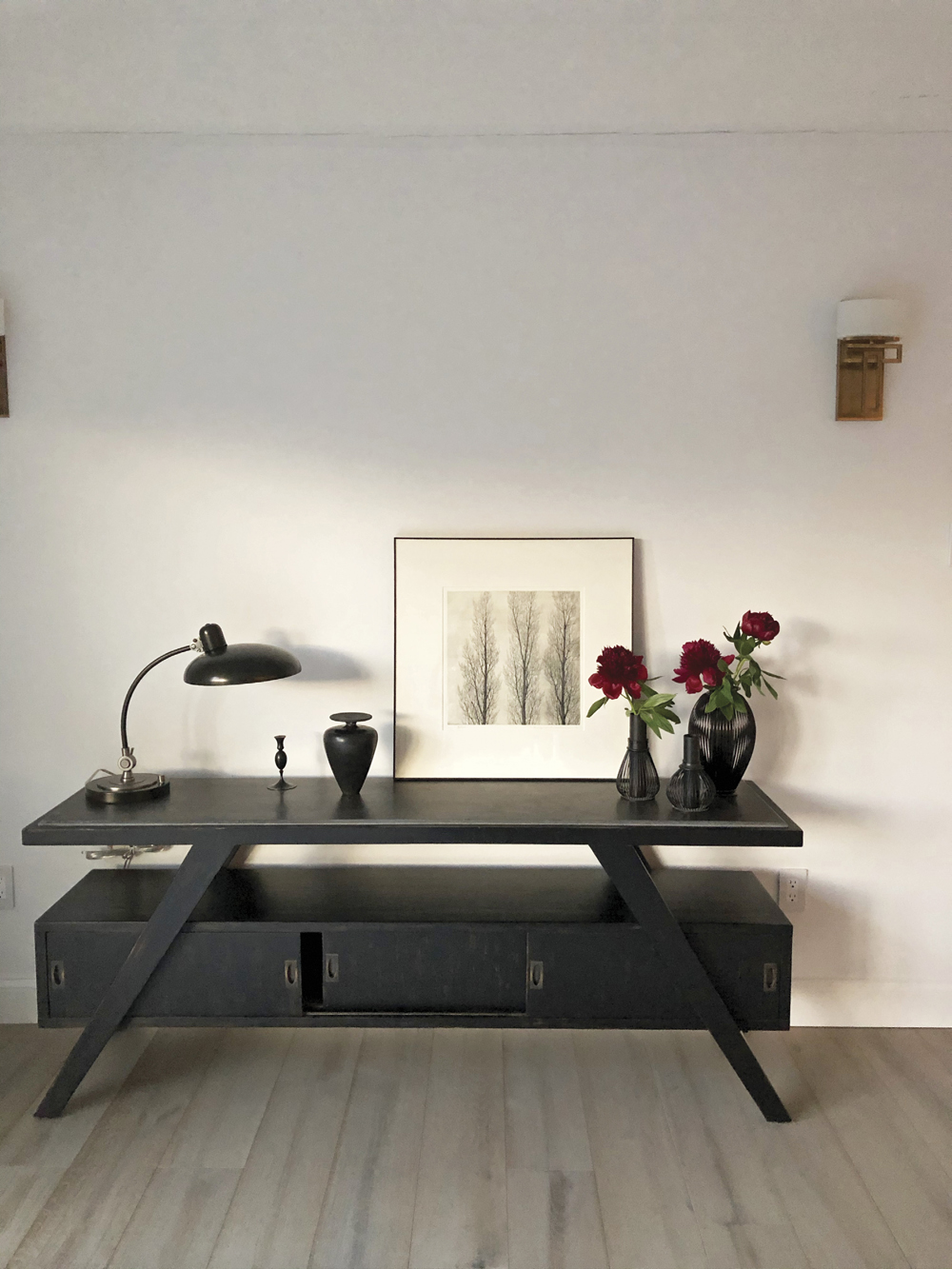 There’s a newer way of living now that wants to bring the feel of the outside in, to bring more of the light in,” says Aude Bronson-Howard, a designer and the director of the newly launched, Hudson Valley-based firm ABH Home Design.

Bronson-Howard’s three-bedroom, three-bath house in the Woodstock hamlet of Bearsville is a sublime manifestation of her airy, light-filled vision of home living. Built in 1961, the 2,000-square-foot Cape Cod was considerably darker and outdated inside, with dowdy window configurations that weren’t taking full advantage of the magnificent mountain views that surround the property when she acquired it in 2018. But with Bronson-Howard overseeing, her longtime collaborative contractor Manuel Molero and his crew have since transformed the structure into a home whose interior feels fresh, contemporary, spacious, and inviting. 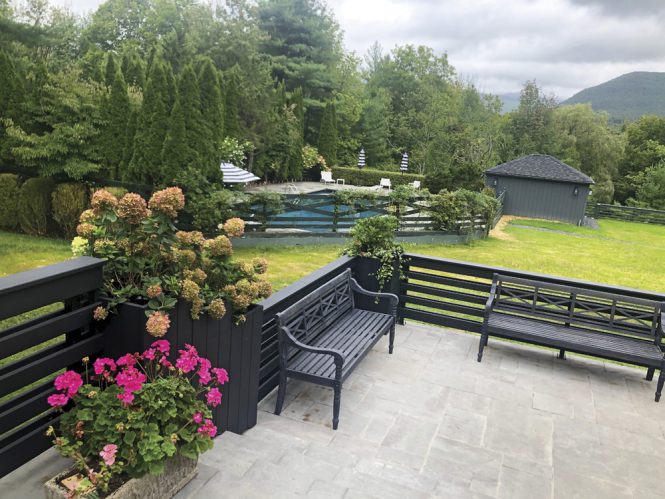 The tri-level bluestone patio features built-in planters and a view of the pool and the (often misty) mountains beyond.

Formerly a drab shade of early 1960s light green, the home’s exterior has been brought to life with a more fashionable scheme of crisp charcoal gray with black trim. Step in through the front entry and the contrast with the understated tones outside is dramatic. All the interior’s skim-coated walls and ceilings (including the latter’s exposed wooden beams) have been given a clean, seamless, flat-white treatment and the flooring has been redone in pale, wide-plank maple. Round the corner to the left and the living room spreads out before you, the sunlight flooding in through a massive, vista-framing picture window that replaces the original, obstructive, multi-paned affair and a distracting radiator. Overhead hangs a modern, drum-shaped Arlo light fixture, one of several pieces of space-age lighting found throughout the house.

Much of this area of the house’s newfound openness owes to the removal of the wall that had long closed it off from the kitchen, another sunny room, which Bronson-Howard has outfitted with unobtrusive, light-toned cabinetry. Off the opposite side of the kitchen is a large sunken dining area with still more windows—like most of them, the original hand-cranked windows, repainted a glossy black to offset the soft white of the walls—that make for a near-al fresco eating experience in any season. Opposite the living room, a dedicated TV room puts the flatscreen far away from the usual eyesore perch in the main entertaining space. 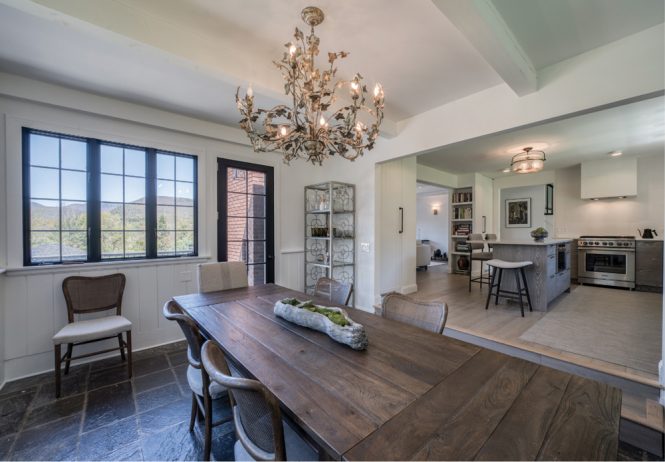 The dining room features locally sourced bluestone floor with a silverleaf vine chandelier and table and chairs from Arhaus. The passageways between the kitchen and the dining room and living room were substantively widened during the renovation to allow in more light and better flow.

“I want the people who live here and visit to really be able to feel a sense of space and comfort, of calmness,” Bronson-Howard explains. “For it to be an oasis—but an oasis that actually functions for their everyday lives.”

The Bearsville remodel marks the newly Hudson Valley-ensconced ABH’s debut on the local home design scene. But while her business may be new to the area, Bronson-Howard has been creating interiors for private and commercial clients for two decades, and her reputation for innately knowing what looks and feels good—and for working comfortably with clients who seek the same—has long been legendary in the greater world of design. In fact, one could say her resume is, quite literally, the stuff of movies. 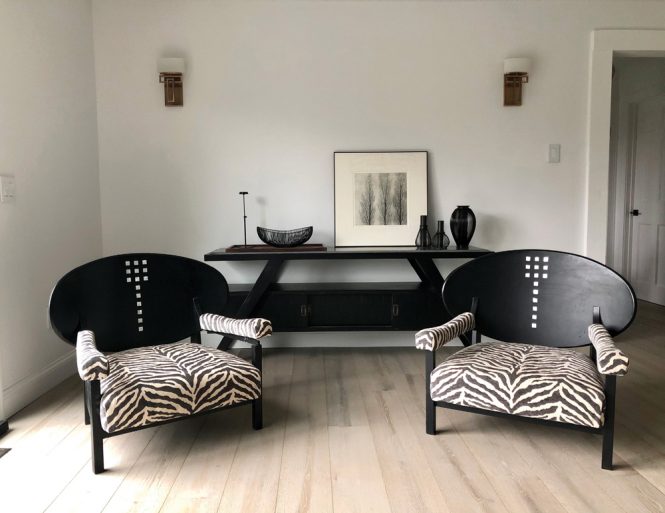 Raised in Paris and New York, Bronson-Howard started in fashion, working for Yves Saint Laurent and creating a line of menswear for the venerated French design house’s US market. After 10 years with YSL, she transitioned to costume design for feature films, and the list of cinematic titles for which she has clothed characters is staggering: Scent of a Woman, Carlito’s Way, and Donnie Brasco among them.

In addition to working with A-list directors like Martin Scorsese and Brian DePalma, she has designed outfits worn by Marlon Brando, Brad Pitt, Al Pacino, Diane Keaton, and, most frequently, Robert DeNiro. Bronson-Howard has also supplied her services to TV advertising campaigns for such clients as Nike, BMW, and Chanel. In the early 1990s she branched out into home design, working with private clients in New York, Westchester County, and Europe as the field increasingly became her dominant focus. The transition, she says, was a natural one, and it informed her approach to the Bearsville renovation.

“More and more, people are moving toward working at home, especially since COVID started,” she says. “And they really want a lighter, less-cluttered feel. So that’s really what my goal has been with what we’ve done here.”

The colorful accent pieces that Bronson-Howard has tastefully placed throughout the house give its rooms just the right splash of whimsy and dimensional pop; the tripod metal ellipse sculpture that stands in a bedroom and echoes a nearby framed reproduction of a classical drawing of an ellipse. “[The print] is something that the previous owners had left behind, and I just really liked it,” she says. “Later on, I found the ellipse sculpture, which just went so perfectly with the picture.”

A more tangible type of dimensional creation, though, involved increasing the space overhead in the two upstairs bedrooms, whose entry doors directly face one another. Typical of a Cape, the upstairs headroom was low—a claustrophobic seven feet in each room. At Bronson-Howard’s direction, Molero raised the ceilings in both spaces to a lofty 10 feet apiece, following the peak of the roof. The results are capacious, cathedral-like ceilings in the mirroring chambers, which have been made even more accommodating by the natural light pouring in through the enormous square main windows that have taken the place of the much smaller original openings. Like the central living room window, they act as frames for the gorgeous, seasonally changing scenery outside. “In one of the bedrooms, the big window faces east and looks out on the woods,” says Bronson-Howard. “It’s really beautiful, how the sunlight comes through the trees in the morning.” For nighttime light, the eastern bedroom’s futuristic chandelier, by Jonathan Adler Lighting, further illuminates the reasons why Bronson-Howard cites the welcoming space as her favorite room in the house. 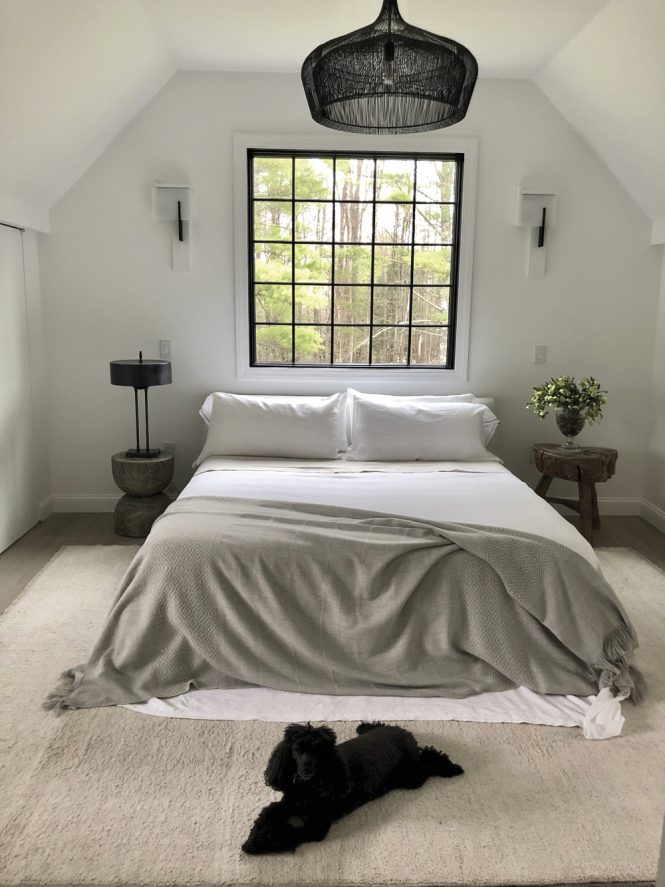 The primary bedroom was completely renovated to raise the ceiling from seven feet to 10 feet. A picture window was installed to frames the eastern light. Dumas the poodle (named for Alexandre Dumas), guards the bed.

A central element of the upstairs full bath is a retro-Deco stainless steel medicine cabinet (by Restoration Hardware) and matching wall sconces; the first floor’s half bath is likewise appointed with retro fixtures. Another full bath can be found in the finished basement, whose unusually high ceilings and wealth of windows maintain the relaxing mood that permeates the home and makes that level ideal for use as a guest quarters or family space.

The multi-level patio entertaining area feels like a natural extension of the living room, Mobius-looping Bronson-Howard’s concept of bringing the outdoors inside. Defining the tiers of the open-air space is a series of open horizontal-beamed dividers, painted to match the house’s exterior and ingeniously incorporating custom-made planters brimming with lush flowers and shrubs. Further echoing the home’s dark-grey outer walls are those of the cabana that serves the in-ground pool and, at the eastern border of the property, the 500-square-foot outbuilding (made by joining two sheds purchased from and delivered by Brad’s Barns in Kingston) that presently functions as Bronson-Howard’s textile studio. Gone from the grounds is a horizon-blocking three-stall garage that had stood dead-center at the backyard’s edge.

Currently, Bronson-Howard is developing a line of colorful throw pillows, examples of which, naturally, adorn the Bearsville house. She’s also looking forward to returning to the European industry trade shows where she sources many of her design materials and ideas, when COVID-19 sufficiently subsides. Until then, like so many others, for much of the time she’ll be at home—which in this case is certainly a delightful place to be.