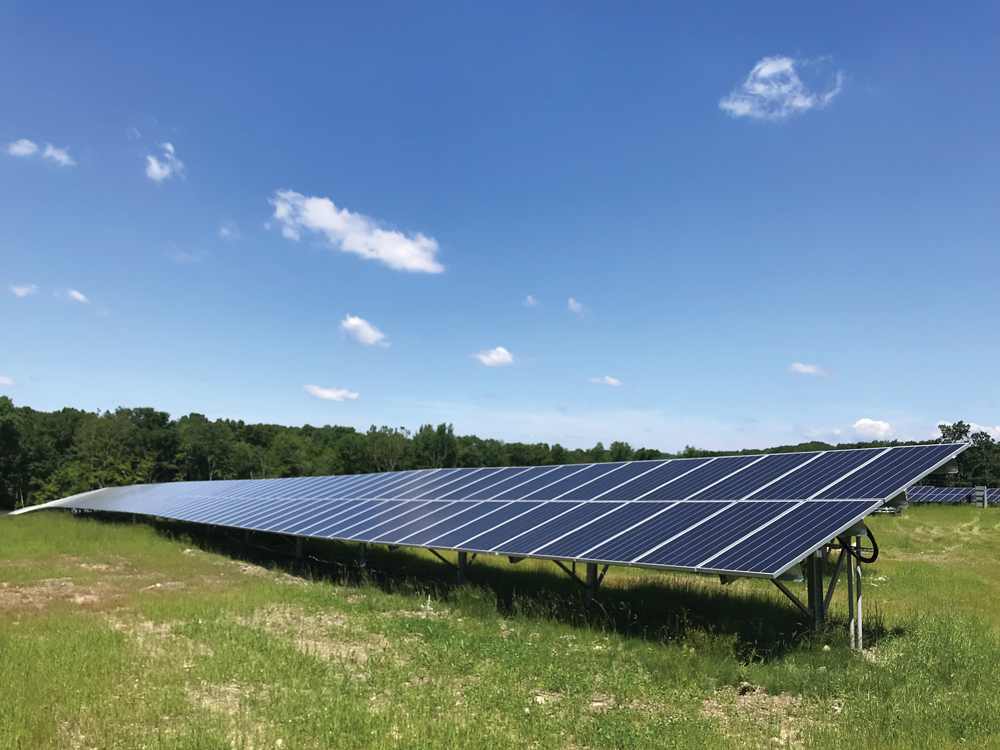 When I bought a house in Kingston, I was as eager to install solar panels on its roof as I was to renovate it. But my hopes of going solar were quickly quashed. A neighbor’s elm tree—tall and lovely—stood smack in the way of the sun. So I put my solar plans on hold. I had plenty of renovating to do in the meantime anyway.

The elm tree recently came down in a storm, so I could install my own system, but there’s no need. New York State’s community-distributed generation program—aka community solar—allows local utility customers to generate solar energy, and save on utility costs, simply by signing up—and a slew of solar-power utility companies are participating.

“Community solar is a new type of energy opportunity for everyone”—residents, small businesses, schools, and houses of worship—“to enjoy the benefits of receiving solar energy, especially people who otherwise couldn’t participate,” says Jason Kaplan, general counsel and director of operations at PowerMarket, based in Brooklyn. “They might be renters, not own their roof, or have too much shade on their property. But they may also be passionate about using solar energy, and want to save money on energy bills, and community solar offers both those opportunities.”

Each community solar project is owned and operated by a project developer, management company, or contractor. The sponsor oversees the subscribers and interfaces with the local utility. Based on their historic annual usage, subscribers are each allocated at least 1,000 kWh per year. “Solar energy is generated by this project, and all that clean energy is sent into the grid,” says Kaplan. “Community solar acknowledges the value of the energy being made and entering the grid, and provides monthly credits of up to 10 percent to each subscriber.”

In June, PowerMarket and its partner, the Stamford, Connecticut-based Green Street Power Partners, opened a 5.544-MW community solar farm, which Kaplan says is New York State’s largest, on Riley Road in New Windsor. The project offers approximately 750 Central Hudson customers the chance to subscribe and save. Although Kaplan says there’s no risk to subscribing—there’s no impact on a customer’s relationship with Central Hudson or third-party suppliers, and subscribers can withdraw at any time—he notes that “being New Yorkers, like we are, it’s sometimes hard to sell us something that’s too good to be true—and community solar is both too good and true.”

At press time, the Riley Road project’s subscribers included the United Methodist Church and the nonprofit Hudson River Nature Museum, both in Cornwall-on-Hudson; and Fruition Chocolate in Boiceville.

“In terms of sustainability and the environment, this is a great fit for us; plus, no wires, no panels, no installation, no issues with the roof,” says Tom Bregman, Hudson River Nature Museum’s executive director. “The goal of the program is to activate all of us to participate in our community’s energy future. New York wants residential and small commercial customers to participate. Other states, like Minnesota, have only a few large commercial entities participating. Here, we have this diverse group of participants from all different walks of life.”

The Riley Street project was expected to be fully subscribed by early September, according to Lisa Raffin, chief investment officer at Green Street Power Partners; the partners will open a second project, Baxter Community Solar, nearby on Jackson Avenue in New Windsor later this year.