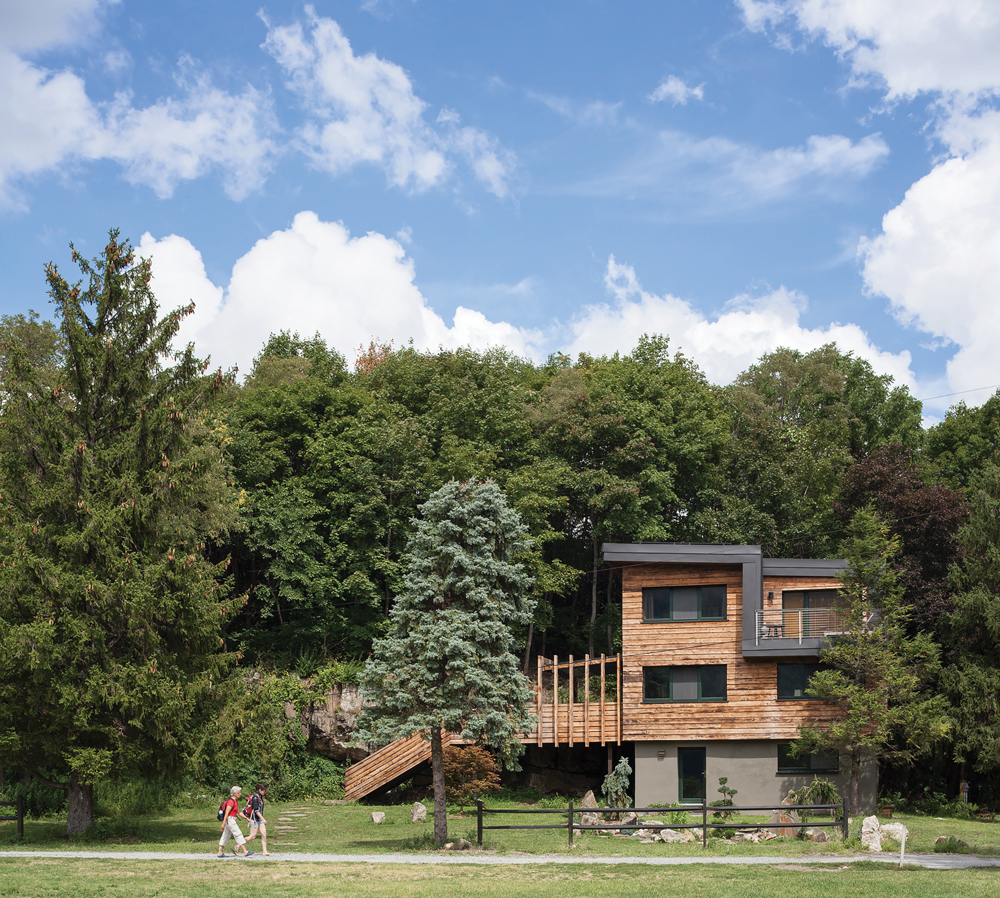 It’s very comfortable and highly personal, maybe a little eccentric,” says James Hartford of Cold Spring’s River Architects about North Street House, the local home he and his firm revitalized in 2013 using an innovative passive house retrofit design. “The combination of the house and the land it’s on, which is directly adjacent to both the village and [riverfront] Dockside Park and has incredible views of the nearby mountains, makes it completely one-of-a-kind as a Hudson Valley property. It’s not hidden away in the woods somewhere, like a lot of newer local passive houses are. It’s accessible.”

Although North Street House’s close riverside access brought disastrous flooding to the structure when Hurricane Sandy struck in 2012, in phoenix-like fashion that same calamity has also helped to see it reincarnated as a newer, safer, stronger, greener, and all-around better home. “The greenest buildings of all are those that already exist,” says Hartford. “To tear down a building and put the old concrete and other materials into landfill and then build an entirely new building on the same site— and use all the energy it takes to do that—takes up far more resources than when you’re able to work with a building that’s already there.

The raised deck provides great views and privacy from the public park, and steps into the rocky hillside behind for a soft, natural edge. Wood screens from Bali blend in with the charred local hemlock siding.

Although the client was focused on refurbishing the house when she approached Hartford’s team, going Passive wasn’t part of the original plan. In fact, it wasn’t officially even part of the services that River Architects were offering then. “At that time, nobody in the general public really knew about Passive House design,” Hartford remembers. “But I had just taken Passive House training. And when I explained to her how passive design worked, how it would bring her energy bills down to, essentially, nothing while making the house a far healthier place to live in and reducing its carbon footprint, her only question was ‘Why do it any other way?’”

“Besides being severely damaged and needing to be cleaned up—there’d been several feet of water in the ground floor from the hurricane—the house was constructed in the 1970s using inferior architecture,” explains Hartford. “But while keeping the original two-by-four frame, we were able to raise the ground floor [essentially a walk-out basement] and insert a 15-inch layer of reclaimed foam insulation into the existing foundation. That helped to eliminate thermal bridges and raised the ceiling height on the ground floor. We also added places to install floodgates to protect it from future storms.” 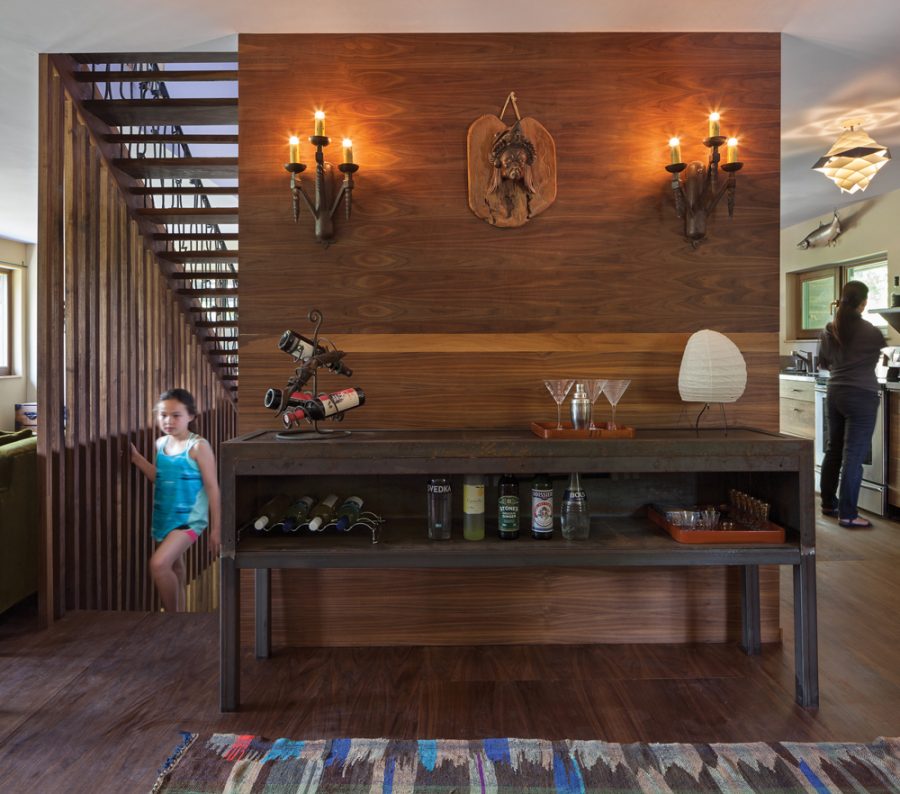 Walnut paneling and floors, and walnut slats that span from floor to floor screen the open tread stairs, giving the house an open, spacious feeling. A mix of antique and Mid-Century lighting, Asian antiques, and an industrial-grade stainless steel kitchen made in the Bowery create an assemblage of contrasts.

Airtight construction techniques and additional, passive-complaint cellulose insulation and wall-thickening Larsen trusses were installed throughout the house, and high-quality performance windows were added. For the upgrade, Hartford and the client chose highly efficient new HVAC systems: a mini-split heating and cooling system and an ERV (energy recovery ventilation) system, which pushes out stale air while constantly pulling in fresh, filtered air that’s free of dust, pollen, pollutants, and other irritants and allergens. “It’s actually even better air than the air outside the house,” says Hartford. “Pollen is certainly a big issue for a lot of people in the Hudson Valley, and with the new system the difference with that is dramatic.”

Dramatic to the eye, though, is the additional floor and new roofline that the rebuild brought to the house, which had been a modest two-story structure. “The original design had a pitched roof, but we were able to add a third floor with a slightly inclined roof.” Atop the new roof, which is covered in dark, self-regenerating natural zinc, is an 8kW solar array that powers the completed PHIUS-certified home and renders it completely energy neutral. “The house essentially has no energy costs other than the basic connection charge from Central Hudson,” Hartford says, stressing that no fossil fuels are required for the home’s operation. “And if the outside utilities ever do kick off, the temperature inside doesn’t really change.” Along with the walnut plywood flooring and other interior details, what contributes to the house’s distinctive look is the rustic, locally harvested hemlock siding, which was treated using the Japanese shou sugi ban charring method. 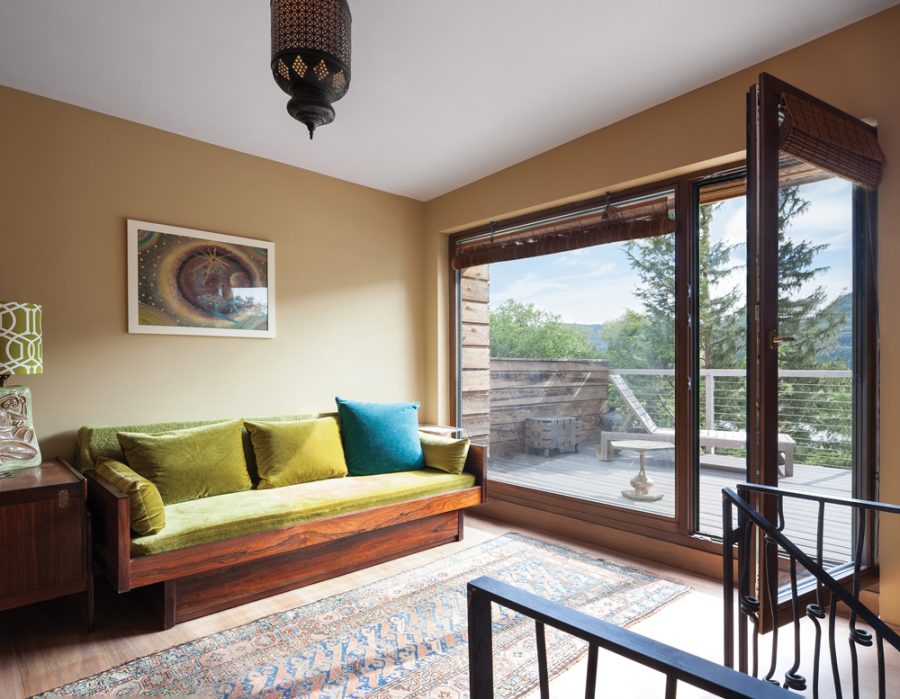 The top floor balcony opens up to the view from the upstairs sitting area, creating a private outdoor room that looks out toward West Point, the river, and mountains beyond. The oversized, triple-pane windows are composed of low-iron glass, giving a crystal-clear view.

Not only has the client been delighted with her family’s reborn, effortlessly comfortable new home, but River Architects are becoming progressively known as a go-to firm for other area clients who are interested in passive modification of existing properties or new Passive-certified constructions. Hartford mentions the Seminary Hill Cidery’s 6,800-square-foot, two-story cider production facility and tasting room in Callicoon, which recently received its PHIUS certification.

“Although the pandemic has of course been difficult on all of us, it’s also affected the attention being paid to passive design in a positive way,” he observes. “The Hudson Valley has been exploding with the demand for new housing, and increasingly people are looking toward Passive technology for their homes.”