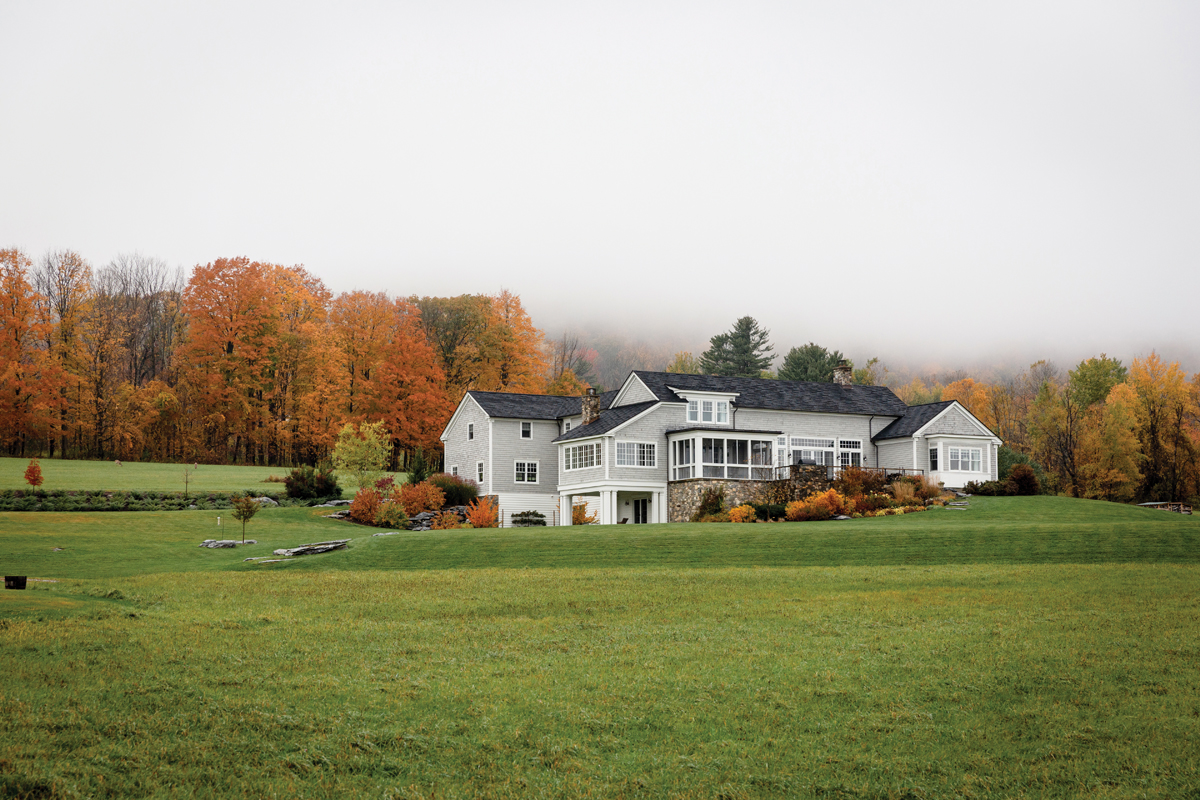 To properly capture the site’s phenomenal views, architect James Harwood built the house in essence, backwards—with the rear and side facing the road and the front door remaining invisible from that vantage point.

An uncanny ability to envision the invisible might just be James Harwood’s superpower. Each of the Berkshire-based architect’s creations, long before they materialize in three dimensions, resides in his mind’s eye—as evidenced by Hilltop Residence, a stunning example of Harwood’s clear sense of vision in the Berkshires.

The clients were initially drawn to the fact that Harwood—after 18 years in New York City—had been locally based for 15 years. Upon meeting, to tour a neighboring home of his design, they were impressed with Harwood’s incorporation of distinctive design elements permeating the high-quality workmanship.

The owners wanted their home to be welcoming and comfortable—keen as they were on drawing their friends and adult children home for visits—and ultimately asked Harwood to design their living space using the concept of “Berkshire-farmhouse-meets-Nantucket” as the inspirational anchor. This, coupled with a building site in the midst of rolling fields, became the foundation for a shared vision. 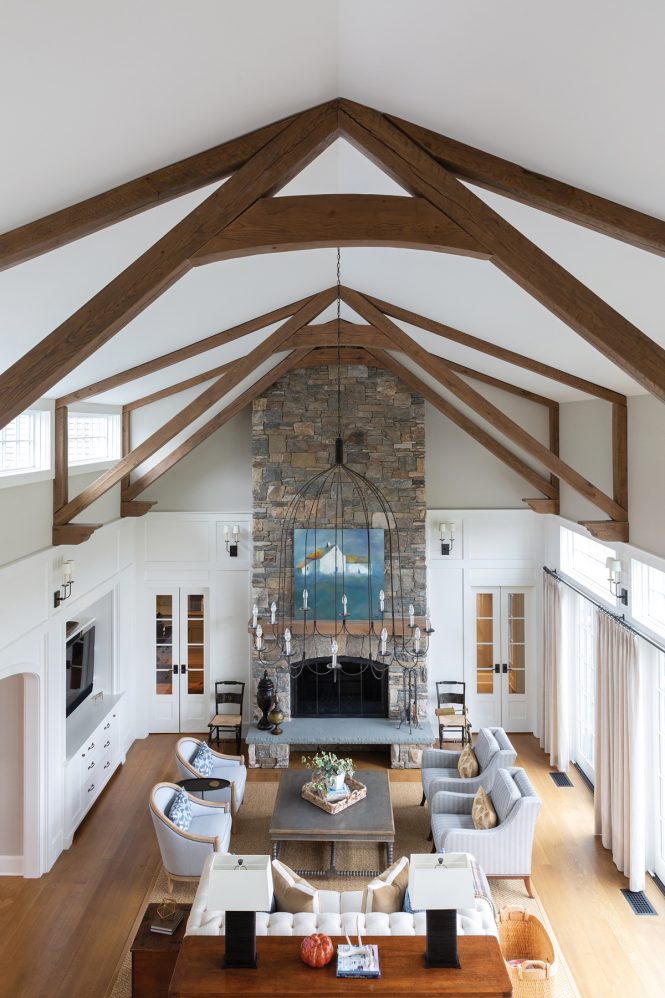 Wide-open spaces, as evidenced in the great room’s soaring ceiling and wall of windows, carry through the entire ground floor and allow for sweeping views south—all the way to Great Barrington.

Harwood was immediately tasked with orienting the house in a way that took full advantage of the sloping, wide-open site with sweeping vistas in all directions. The hillside proved both a boon (affording a walk-out basement) and a challenge (creating a physical separation between indoors and out) when it came to the overarching task of connecting the living spaces with the exterior given the grade change.

“[The first challenge was] to figure out a way to make the house claim its place on site,” says Harwood, of one boasting phenomenal views from Pittsfield all the way south including a trio of ski areas: the back of Bousquet Mountain, Ski Butternut, and the tiniest glimpse of Catamount. For Harwood, a self-described Modernist at heart, form should follow function. As such, his vision hinged on situating the home, in essence, backwards—with the rear and side facing the road and the front door remaining invisible from that vantage point. 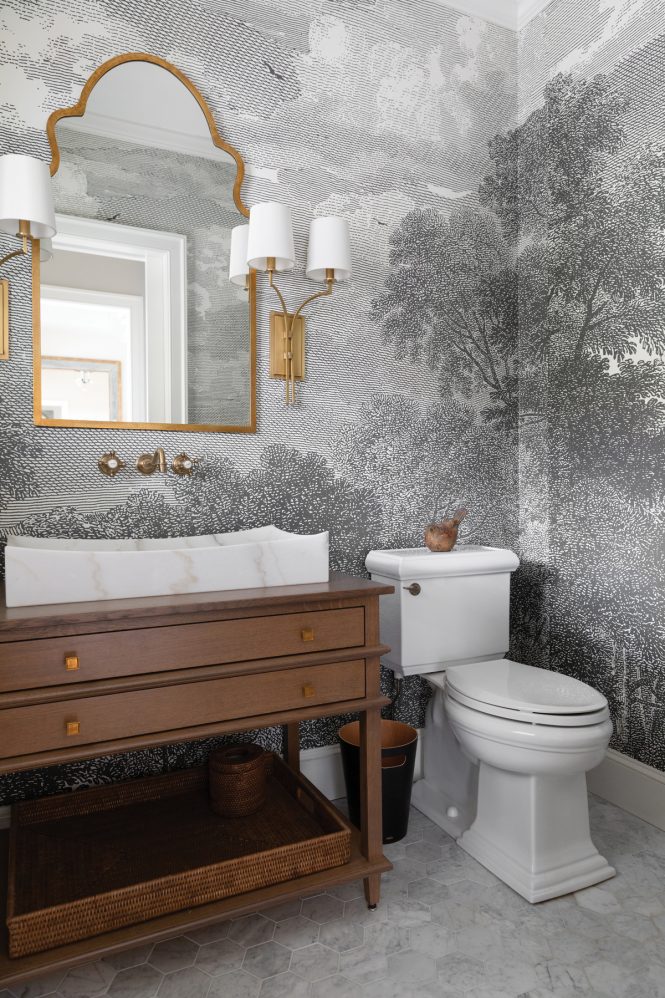 The clients were not on board with this unconventional idea at first. But once Harwood set the stage of a visitor approaching the main entrance and being surprised by sweeping views through a wide expanse of glass opposite, they were ultimately sold on the idea.

The home’s public spaces are at once seamless and distinct. The great room is punctuated by a vaulted barn ceiling (framed onsite from white oak locally sourced in Ghent), the tones of which are matched by Vermont white oak flooring. A soaring stone fireplace coupled with eight full-size glass door panels further invite the outdoors in (as do transom windows, designed to draw in late-afternoon sun) via natural materials and show-stopping views, something that ranked top of Harwood’s to-do list. Symmetry, as evidenced by two more pairs of French doors flanking the fireplace, is echoed in built-in units buttressing the kitchen’s threshold; bookshelves to either side of the sink; and windows framing the sunroom’s fireplace. The expansive eastern wall, in each of the aforementioned spaces, is entirely dedicated to glass.

“I like to pull views through a house,” says Harwood of a way to drive the experience, pointing to unimpeded sight lines stretching the entire length of the ground floor. Thoughtful choices, like the kitchen’s enormous center island (fashioned from a single slab of Calacatta marble) as well as the pass-through to the sun room—whose vaulted, beadboard plank ceiling unequivocally evokes New England island living—evoke spaciousness. 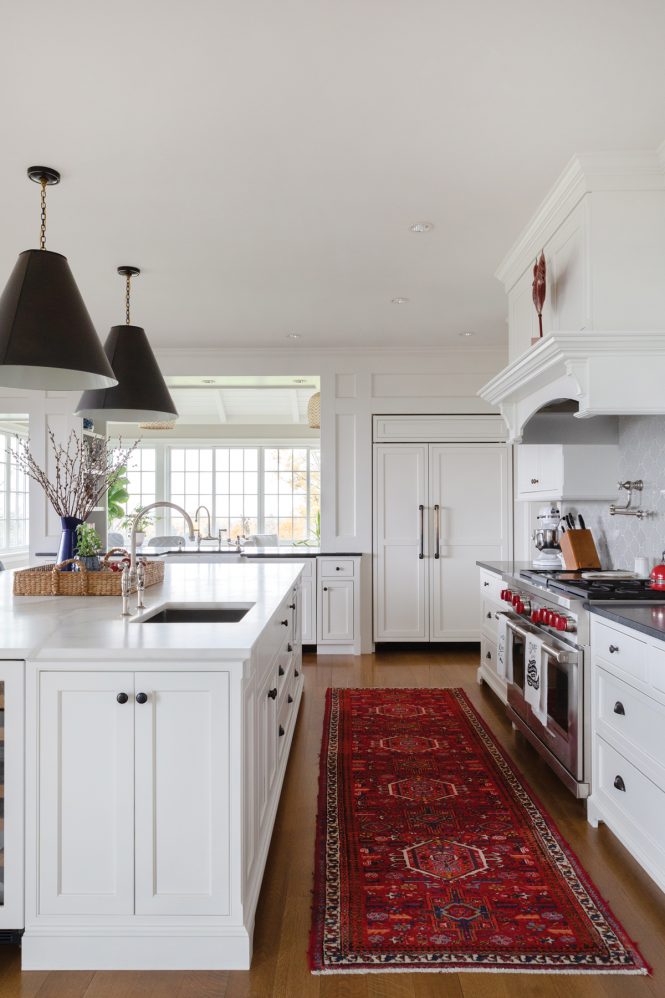 Harwood’s approach to trim, consistent throughout
the house, lends itself to a streamlined flow as evidenced in the airy kitchen. Ample
space for the cook—with easy access to the commercial range, farmhouse sink, and cabinet-paneled refrigerator—is balanced by an equally wide passage for traffic (and access to the outdoor, screened-in dining area).

The clients, in seeking to build a family home that would suit them in the present and grow to serve them in the future, worked with Harwood to design discrete areas—including wings for the kids, and guest and primary bedrooms—ensuring ample space to which everyone can retreat. The primary bedroom, located on the ground level to facilitate aging in place, boasts a paneled cathedral ceiling (echoed in the primary bathroom) designed to take advantage of interior height without becoming too massive.

Harwood points to other spaces that “stake a claim to do something different,” like his-and-hers offices—one, whose wall of custom built-in bookcases evokes masculinity, the other light and spacious femininity. A hidden bookcase in the loft-turned-retreat gives way to a surprise playroom for the grandchildren, and full-sized, built-in bunks will grow along with them, all of which were “a lot of fun to [design],” says Harwood who has been known to use potential pitfalls as opportunities.

Harwood relies on a limited palette, both of exterior materials and interior colors, to create continuity. The same local stone mix from the great room’s fireplace is echoed on portions of the home’s exterior and pavers from the patio are pulled through to the mudroom. Two outdoor living spaces, an expansive patio with fire pit adjacent to the great room and a screen porch off of the kitchen, arose from changes in exterior elevation. On the ground floor, this invites the outdoors in and creates a seamless transition. In addition to proactive measures to keep the lower level dry, an added challenge with a finished basement is “making it feel like it’s first-floor space, not [underground] space,” says Harwood. To achieve this, the architect created recreational space (for watching movies or shooting pool) that opens onto the grassy lawn via a covered patio, created by the sunroom directly above. 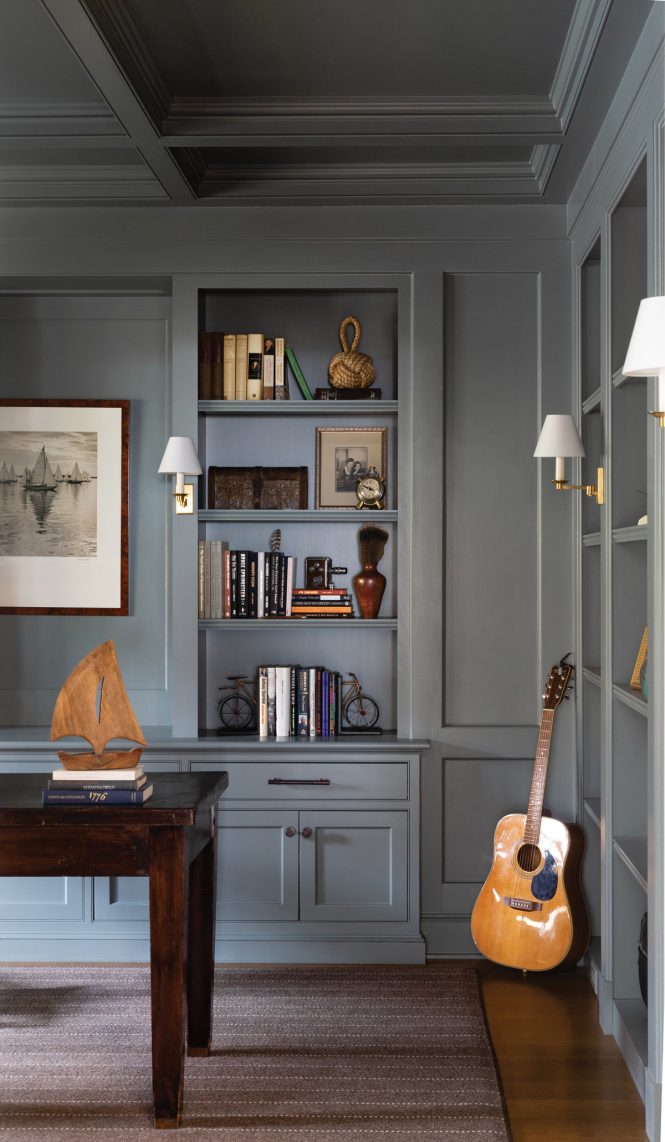 This office, one in a pair flanking the great room’s massive stone fireplace, serves as a retreat. Both intrigue
and intimacy are achieved via intentional details like custom millwork, a tray ceiling, and built-ins, all drenched in the same deep tone to create the cozy effect of a cocoon. Occasional nods to the sea, equally evident in collectibles and wall art, harken back to the Nantucket-style home the clients envisioned.

Expressing ideas on paper prior to embarking on a build is Harwood’s preferred means of progressing through a project. In the case of this home—which went up in just over 12 months—the builder was ready to begin before myriad interior design aspects had been determined. “Jim worked tirelessly with us on every part of the design, always keeping one step ahead of where the builder needed us to be,” says the client, who especially valued Harwood’s openness to her designs. “If I had an idea, Jim would draw it up so I could have a visual,” as evidenced when selecting lighting—a process during which it was not uncommon for Harwood to draw exact replicas of each fixture and place them on walls in the plans for the homeowners to envision.

For Harwood, it’s all about striking a balance between form and function—with the former attracting attention, while the latter often takes shape via behind-the-scenes choices that pack an equally powerful punch. “We’re always trying to build a sustainable house,” he says, pointing to one that is heavily insulated and, in this case, harnesses much of its energy from a 53-panel photovoltaic array installed on the barn roof. 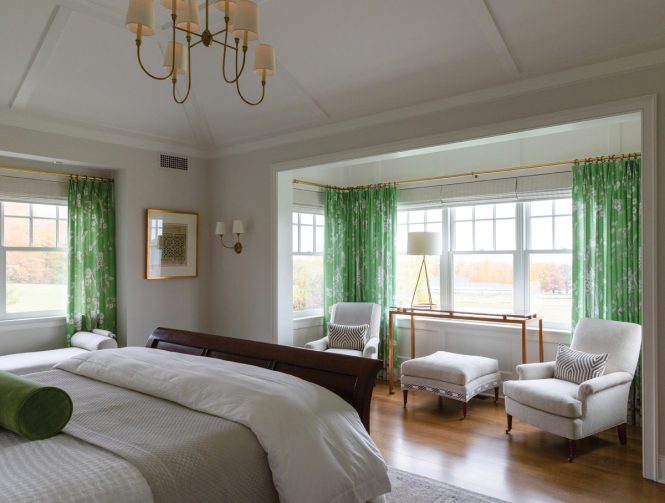 This primary bedroom suite takes full advantage of the property’s main asset— sweeping westerly views, plus glimpses to the north and south thanks to an alcove- turned-reading nook that doubles as a dramatic stage on which nature’s year-round show unfold. The bedroom’s ground-floor location reflects an intention to facilitate aging in place down the road.

Harkening back to the project’s genesis, the home’s exterior is wrapped in cedar shake—a nod to the Nantucket shingled homes that inspired the project—and treated to evoke the natural patina that evolves with age. “The shingles would turn that color over time, but it’s nice to force them so the client gets that [aesthetic] right when they move in,” says Harwood, whose creative whimsy is on display via subtle triangular accents, visible on the home’s western facade, intended to create interest. “These details really help a project sing,” he says.