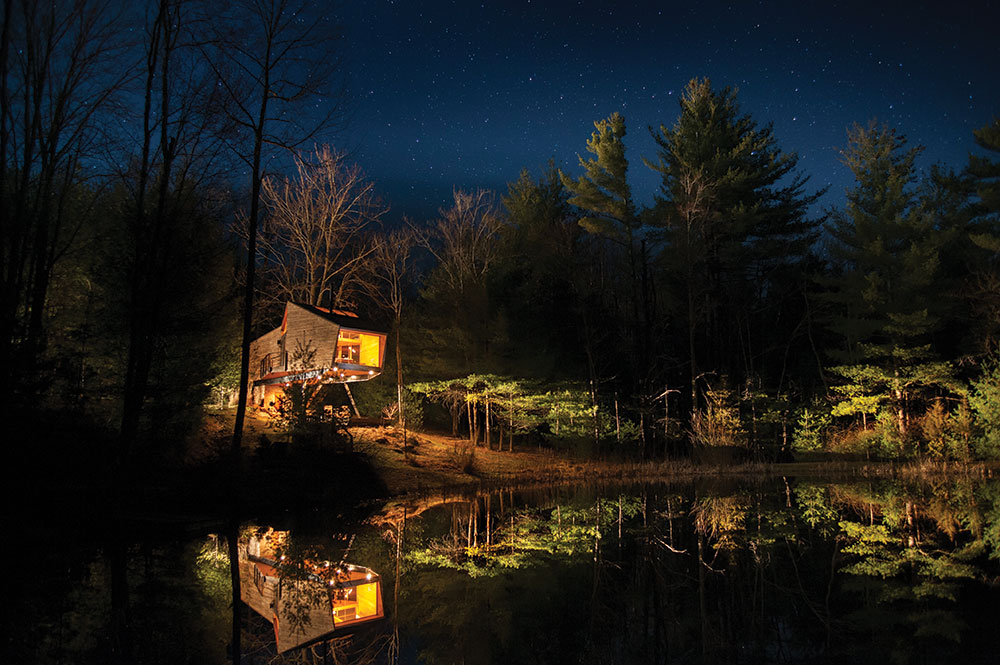 Antony Gibbon’s approach to design springs from his love of nature. The UK-based architect works at “making architectural environments work into nature as opposed to the other way around,” he says. “[It’s] all about nature and how a building interacts within that space through its shape and use of materials.”

It was inevitable that Gibbon should focus a large portion of his residential design practice on treehouse forms, exploring “the idea of sleeping up in the trees’ canopies as the driving force behind the design.” One of his treehouse projects, built by the late William Johnson and located in the hamlet of Willow, outside Woodstock, is a case in point. 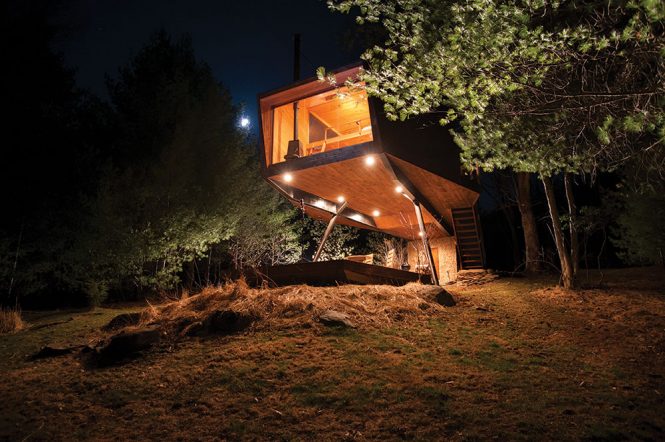 The treehouse, which is entered via a long, ladderlike staircase and perched over a generous cedar deck that’s reminiscent of a swimming dock, overlooks a pond and is surrounded on three sides by forest. The  building has an unusual shape comprised of two connected, cedar-cladded, boxy forms, and is located on the same 34-acre property as its owners’ weekend home. “The treehouse was an extra and was constructed to rent out to the public via Airbnb as well as [for the couple] to use themselves in between,” he says. “They have four kids they are keen to let use this space as they grow up.”

Ultimately, Gibbon says, the house “was designed to be among the trees to soften the strong geometric shape.” His challenge was “to unite the forest with the building” by cladding the treehouse with Catskills-sourced cedar, and describes the treehouse’s style as “geometric, rustic, modern, glamping—a good mixture of all.” 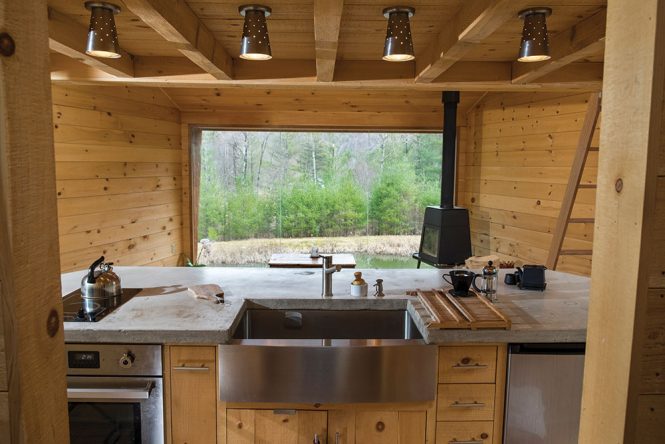 At 500 square feet, the house—which Gibbon has dubbed Inhabit and which appears on Airbnb as Willow Treehouse—qualifies as a tiny house. It is comprised of one long room with an open sleeping loft over the living area and kitchen, and a second lounging/sleeping area tucked away at the back end. But despite its small size, the house feels spacious and airy. Not only are the majority of the walls made of glass, showcasing the views, and the ceiling replete with skylights, but the interior, like the exterior, is lined with locally sourced cedar, literally bringing the outdoors indoors.

Though the views are the main focus, with furnishings kept to a minimum, what is included is both simple and elegant. A sofa from Nectar sits facing the main window, overlooking the pond, along with a black steel, Shaker-style wood burner with a matching side bench from Wittus in the corner. Behind the couch is a kitchen island with a cast, polished concrete countertop. Modern, wooden-topped stools, also from Nectar, line up alongside it behind the couch; on the other side of the island, out of view, stainless-steel appliances are tucked away. Overhead, a king-sized bed, heaped with a thick, inviting white comforter, faces the main view.

Not far from the treehouse is a fenced-in, wood-fired hot tub. Gibbon says that both the owners’ children and Airbnb clients love the space, as much for “its magical location” and as for the fact that its location is “full of life: hummingbirds, frogs, bears.” 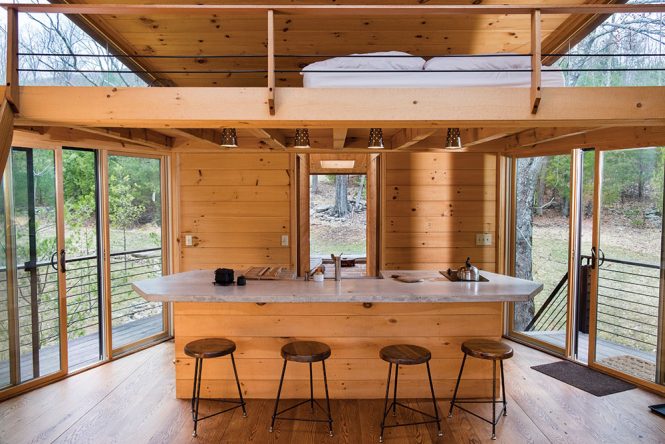