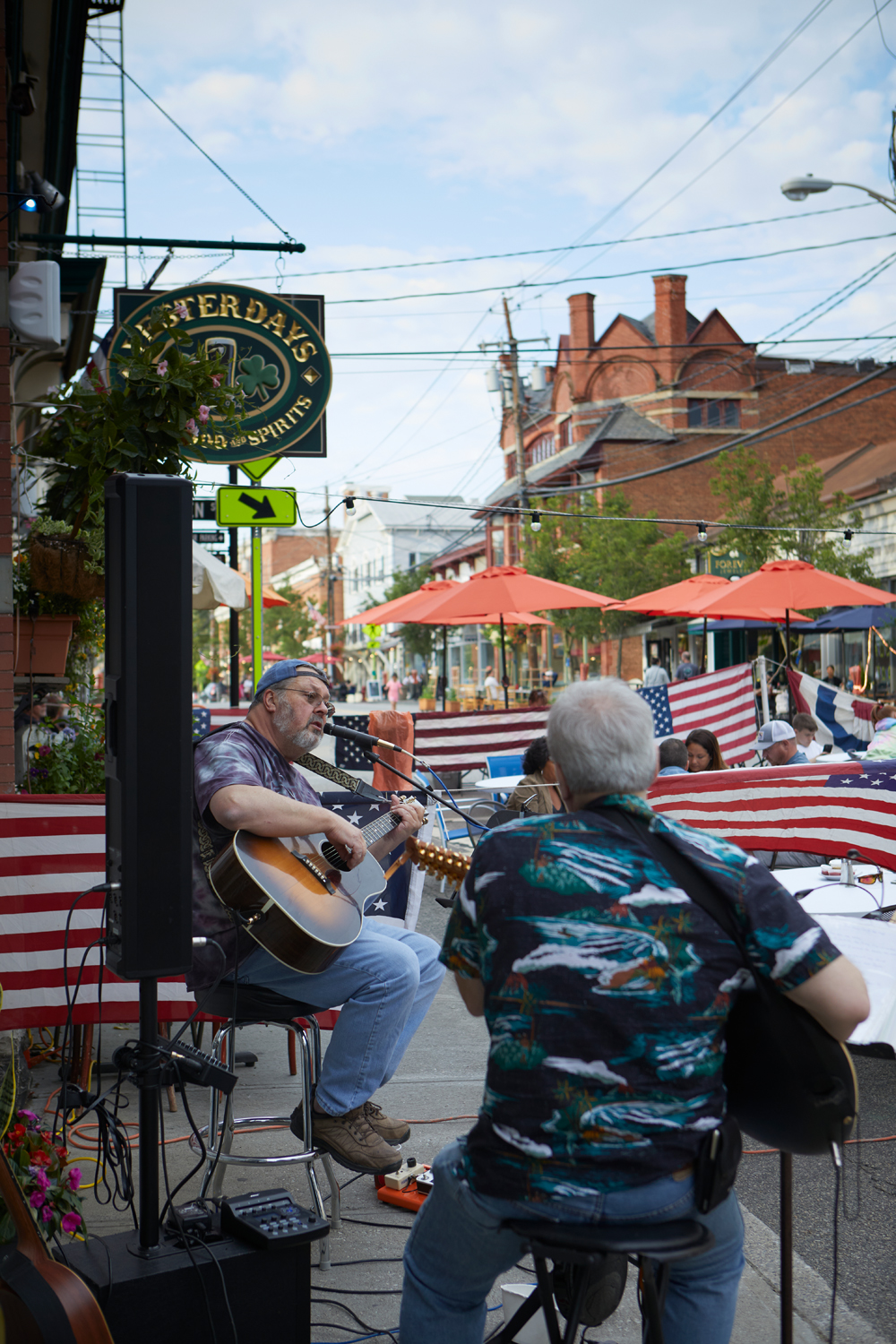 Proximity to Major City: Warwick is 58 miles from New York City and 118.2 miles from Albany.

Transportation: Warwick is located 17.2 miles from Route 17. New Jersey Transit provides commuter bus service from Warwick to New York City and the surrounding areas, and a free Park-n-Ride is located on Route 17A. The public-use Warwick Municipal Airport is located within the town.

The town of Warwick is known for cute hamlets and villages, lots of open space, and family-friendly amenities. With pandemic pressures and the evolution of “work from home” innovations, the real-estate market here, as elsewhere in the Hudson Valley, has exploded. However, there’s no influx of big housing developments and no culture wars between long-timers and newbies: Here in Warwick, there’s a shared sense of home and harmony.

“Even before COVID, there were the beginnings of bidding wars,” says Susan “Shine” Onderdonk, a licensed real estate salesperson with Howard Hanna Rand Realty in Warwick. “Warwick has been able to maintain its suburbs, farms, and cute little villages, along with good schools.”

A conscientious eye toward growth is the town’s hallmark. “We have a balance of responsible development that respects our open spaces and quality of life,” says Michael Sweeton, supervisor of the town of Warwick. “And people sense that we respect where we live.” 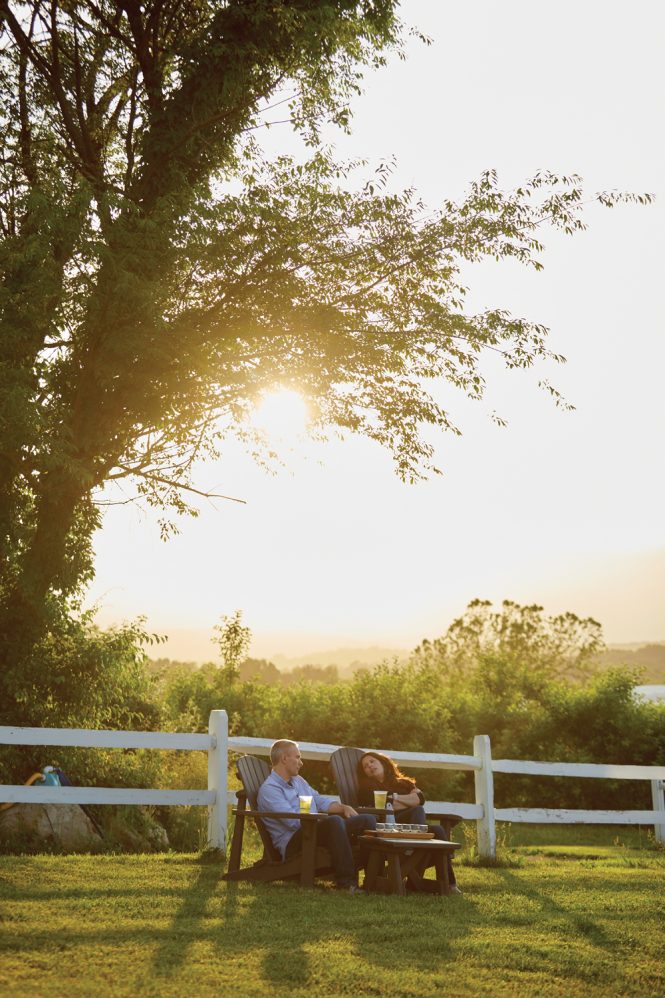 That responsibility came to the forefront 20 years ago, when the town implemented its Purchase of Development Rights (PDR) program. The rights to develop farmland are “bought” by the town with funds raised through a transfer tax paid by real estate transactions within the town, and thus the farmland remains undeveloped. So far, the PDR has preserved 4,400 acres of land with 38 farms. Eight more farms, totaling 750 acres, are in the application process. For local homebuyers, the knowledge that the bucolic setting outside their front door won’t change into a bustling housing project is a major draw.

Danielle Williams-Bell and her wife, Charlie Williams-Bell, were living in Westchester before they bought their home in Pine Island in 2017. Although Danielle had family in the Middletown/Scotchtown/Bloomingburg area, they weren’t interested in the Pine Bush or Middletown school district for their four children. Pine Island—in the heart of the town’s Black Dirt farmland—offered the perfect mix of pastoral beauty and Warwick Valley schools, where their children now attend public elementary and middle schools.

“We wanted to find somewhere that would be a reasonable commute to Westchester, had an LGBTQ-friendly community, and where we could have a little bit of property,” Danielle says. “We were sold on Pine Island because of the Black Dirt flats and the farm areas around us. We also liked the bonus of lower property tax by being in Pine Island but still part of the Warwick school district. We knew we wanted to have kids, so a good school district was important to us.” 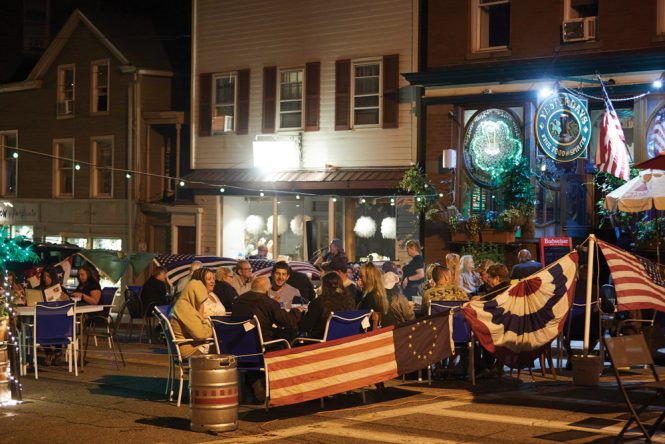 Opposite: A dozen restaurants participated in Warwick’s outdoor dining program in the past two years.

Their Cape Cod-style home is a bit small for their growing family of four children, so the Williams-Bells may eventually sell. But for now, they’re loving it. “The farms, the community, those are our favorite aspects,” Danielle says. “We have chickens, and we are trying our hand at some larger-scale gardening this year. We’re in the area for it, and that’s what we wanted for our family, so it’s working out well.”

The Town of Warwick, which includes Pine Island, is full of sweeping farmlands and pretty vistas (thanks to the PDR). And its three villages—Warwick, Florida, and Greenwood Lake—are each distinctive.

Warwick village’s Main Street is chock-full of boutiques, restaurants, and upscale watering holes. But residents can also get their prescriptions filled at CVS near the iconic Clocktower, or at Akin’s just a couple blocks down Main Street. St. Anthony’s Hospital is at the gateway to the village. And if you need a kitchen pot, a gift, a toy, even just a pair of socks, you can rely on Newhard’s, the department store that’s been helmed by Village Mayor Michael Newhard and his family for 35 years. Walking trails, playgrounds, and other family-friendly activities are mere steps away. It’s safe to say that Warwickians don’t need to leave the village to get their needs met. 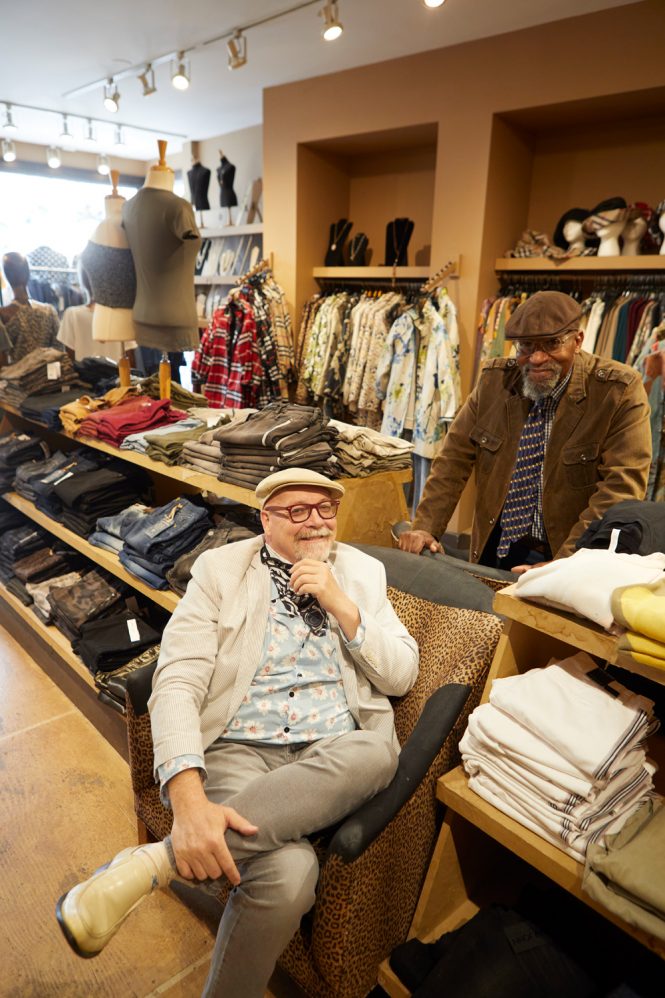 A peek inside Style Counsel, a women’s fashion boutique in Warwick.

The Village of Florida is a little sleepier, but still offers restaurants (including the Florida Bakery & Deli, serving up authentic stuffed cabbage, pierogis, and other plates in a nod to the village’s historically Polish heritage—it’s no surprise that polka king Jimmy Sturr is a village resident), a hardware store, and other shops.

Greenwood Lake began as a playground for the rich a couple of centuries ago. It’s gone through its ups and downs, but the restful water views and boating opportunities have piqued the interest of an avalanche of people lately, according to Onderdonk.

At press time, in Greenwood Lake—where children attend either Warwick Valley or Chester schools—19 homes were actively listed in a price range of $75,000 to $9.5 million.

In the entire area served by the Warwick Valley school district, there were 60 active homes on the market at press time, ranging in price from $219,900 to $3.5 million. 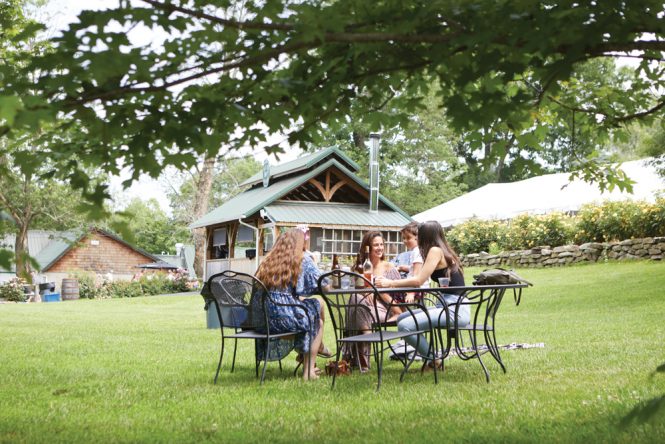 “People are gravitating toward the area; the ability to work from home, also, has opened up many more possibilities,” Onderdonk says. “In the past, it was rare to see a million-dollar listing. Yet between June 2021 and May 2022, there have been three homes listed between $900,000 and a million dollars, and eight listed between one and two million dollars.”

The reasons, according to Onderdonk, are three-fold: inflation, scarcity of inventory, and the “post-COVID attitude”: the need for fresh air, good schools, and safety.

Interest rates are still at historically low levels, fueling the home-buying efforts, and there’s a big need for rentals, as well. “We even have bidding wars on rentals,” Onderdonk says in amazement. People are also buying second homes and renting them out as Airbnbs. That, in particular, has greatly improved the perception of some areas, like Greenwood Lake. 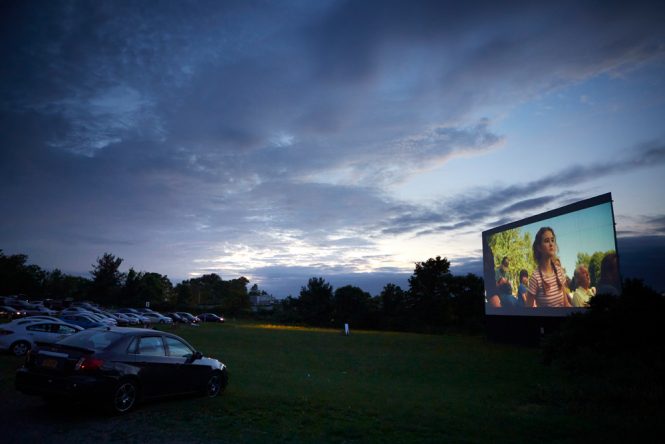 At the Warwick Drive-In.

“We’re dealing with a large number of people, but very little inventory,” Onderdonk says. “It’s a major sellers’ market. Buyers have to be creative and accommodating. Homes are listing at a high price point, but are selling quickly.”

The walkability of Warwick village, especially, has played a big part in the real estate boom. “Many new residents are coming from the city, and they aren’t looking for a three-acre spread,” Mayor Newhard says. “Here, everything is accessible and doable on foot.”