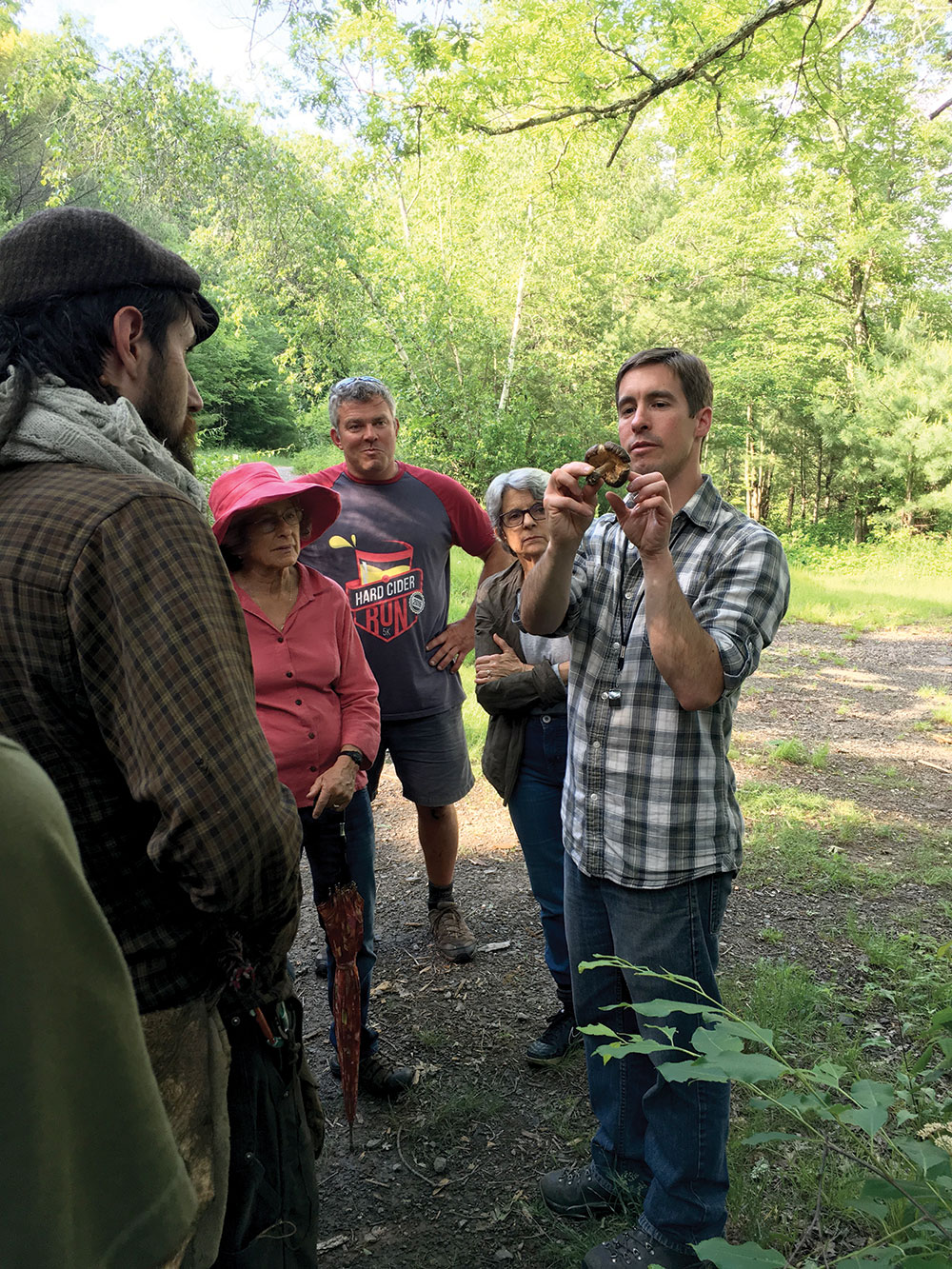 John Michelotti was living in the Westchester County town of Rye and working as a boat captain when he first encountered wild mushrooms. It didn’t take long for him to fall under their spell. It all started, he says, with a walk in the woods with the Connecticut-Westchester Mycological Association. He immediately became hooked on finding and identifying mushrooms as well as learning about their various properties and uses.

“It started from a desire to grow and source a lot of my own food,” he recalls. “I wtas interested in finding out what I could eat, so I went on a mushroom walk, and then I kept on going on mushroom walks. Soon I was switching my schedule around so I could go on as many walks as possible.And  I started reading books on mycology, and the more I learned, the more interested I became.”

Michelotti began devoting his every spare minute to learning about mushrooms’ various uses: culinary, nutritional, medicinal, and ecological. He estimates that, all told, he studied mushrooms 40 hours a week for more than six years—at the end of which he moved back home to Big Indian to his family’s small farm, established over 100 years ago by his great-great-grandfather, and began helping out at home with the production of eggs, honey, and maple syrup. A year later, in 2014, he founded the organization Catskill Fungi and began cultivating fungi at the farm.

Today, Michelotti leads mushroom walks throughout the Hudson Valley; runs cultivation workshops; creates mushroom-inspired art; incorporates edible and medicinal cultivation into residential landscaping design; and produces triple-extracted health tinctures from both cultivated and wild fungi. The organization was founded upon permaculture principles. As such, says Michelotti, Catskill Fungi is all about “helping people and improving the planet through our work with mushrooms.”

Like many of the people Michelotti calls his “repeat customers,” I learned about Catskill Fungi at the Kingston Farmers’ Market, where I bought a mushroom tincture, and from there, took my first mushroom walk on a hot day in July at Onteora Lake. Together with about 10 other people,  ranging from  a toddler to grandparents, I spent a very pleasant two hours walking around the lake in the woods’ cool shade. For that particular walk, Michelotti was accompanied by Erwin Karl, one of the hosts of “The Farm Hour” on WIOC Radio and a fellow mycology afficionado, and Ann Marie Tedeschi of Infinite Roots Herbal Creations, an expert on edible plants. Together, we pried mushrooms carefully from the undersides of fallen trees or plucked them from the ground, and Michelotti taught us the rudiments of identification. He also had plenty of mushroom science to share. “Mushrooms prove you don’t have to have a brain to think or learn,” he noted, then shared stories of mushrooms used for environmental cleanup and to find underground routes for public transportation development.

Catskill Fungi runs walks  from Roxbury to High Falls from spring until late fall. Although the drought had little impact on last summer’s chanterelles and black trumpet mushrooms production, Michelotti said in July that he was hoping for rains throughout August to insure a plentiful harvest of hen-of-the-woods mushrooms in September. “For many of your good edibles, one quick rain and they all come out in basketfuls, whereas some other mushrooms take long, sustained rains,” he said.

But he added, “One thing about mushroom hunting that I’ve learned: You can never predict it. Every time you go out, you just have no idea what you’ll find. We’re constantly finding new things.”

So, come rain or shine, this fall, says Michelotti, newcomers to amateur mycology—or, as he puts it, “citizen science”—should not be deterred.  If you can’t join Catskill Fungi for a walk (held until the ground freezes) or a cultivation workshop, at least be sure to look around for mushrooms when you’re checking out the fall foliage. But don’t ingest your findings unless you’ve confirmed their safety with an expert. “There’s a saying among mycologists,” says Michelotti. “There are old mushroom hunters, and there are bold mushroom hunters. But there are no old, bold mushroom hunters.”