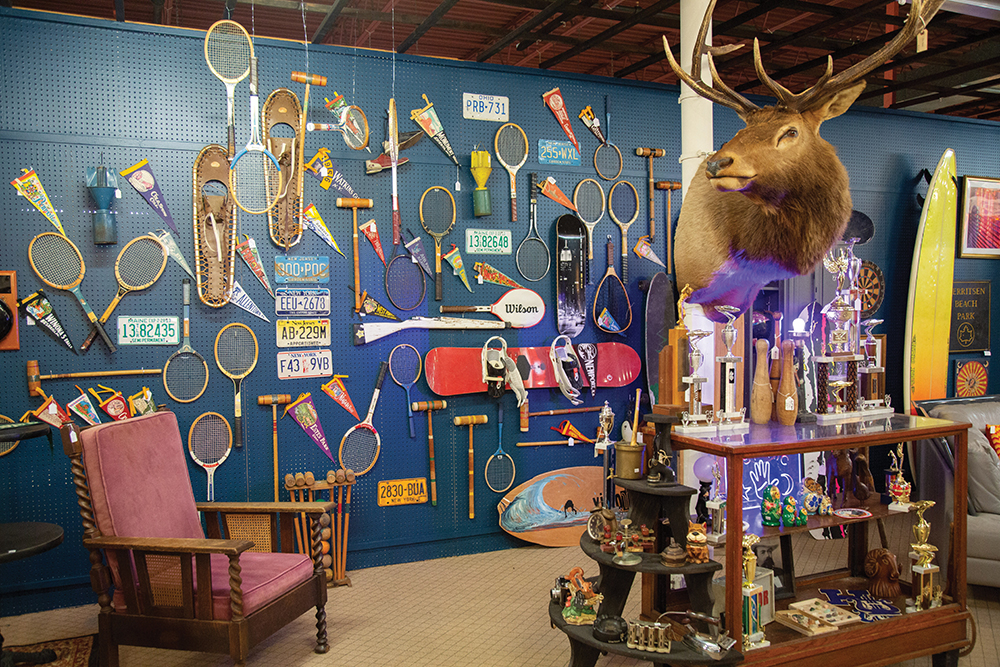 Five years ago, Estee Lauder marketing executive Anthony Vesnaver and his partner, vintage fashion archivist and designer D. Matt Smith, bought a weekend house in Newburgh, NY and began thinking about how to leave New York City behind and live full time upstate. About a year later, they discovered an antiques dealership on Route 9W and became dealers there, selling many of Smith’s finds. But still, the full-time upstate life eluded them. Then, in January 2019, things changed. They took over the dealership and were able to stop commuting. In its place they created Newburgh Vintage Emporium, a recreation of “the idea of the antique store and antique mall,” says Vesnaver. Not only did they repaint the building, update the signage, and bring in local makers, but they also revamped the merchandise and how it was sold as well.

“We really want to modernize the idea of what an antiques and vintage store is,” says Vesnaver. “Usually it’s not fresh.” The biggest difference between the former dealership and the emporium, he explains, lies in curation of its 50 dealers and their products. “We don’t just accept anyone and anything,” Vesnaver says. “We really work hard to make sure all the inventory that comes into our store is truly vintage and antique, obviously, and we work with our clients to curate their environments so that their displays are something different to look at—it’s the Instagrammable antique store, if you will.”

The emporium quickly became so popular that Vesnaver and Smith began looking for a second location. Last December, they opened Newburgh Vintage Emporium Ware-House, just a seven-minute drive away on Route 17K. The new location, in a building that once housed the former Avalon Roller Drome and Big Scot department store, offers 75 dealers and is home to Smith’s design-inspiration fashion and textiles studio, whose clients come from a wide cross-section of American fashion, from Marc Jacobs to Talbots.

“The idea was to add a second location to find a home for Matt’s business and really make Newburgh a hub,” says Vesnaver. When it comes to antiques, “everybody likes to shop where there are multiple locations to go to.”

No two dealerships’ environments are the same, and there are ever-changing “vignettes” or rooms set up using the merchandise, which dates from the 1700s to the mid-1970s and includes architectural salvage, toys, a vintage clothing stop ’n shop, and a range of unusual items—at press time, there was an eight-foot Yetti statue and a 1950s milk delivery truck. “We go around and take pieces from different dealers to create these beautiful moments to inspire our customers and our dealers and to show new ways of seeing things,” Vesnaver explains. Sometimes, he says, that means paring an 18th-century pie cabinet with a Mid-Century Modern lighting fixture. “We like to show new ways to put pieces together from across eras.”

But the two locations are as much about fun as they are about design inspiration and education. “I thought I was going to open this antique store and sit around and read comic books all day, but it’s really lively and busy, and the music’s fun,” says Vesnaver. “We change the vignettes each week, and people come back to see how things are changing. People are looking for things to do now. Everybody talks about how the mall is dying, but it’s dying because the store owners aren’t creating any magic anymore. We’re trying to do that. People are craving environments and someplace to go hang out in. You can take your grandfather to our stores and he’ll enjoy it. And so will your 14-year-old son.”

A post shared by Newburgh Vintage Emporium (@newburghvintageemporium) on Feb 25, 2020 at 4:27am PST