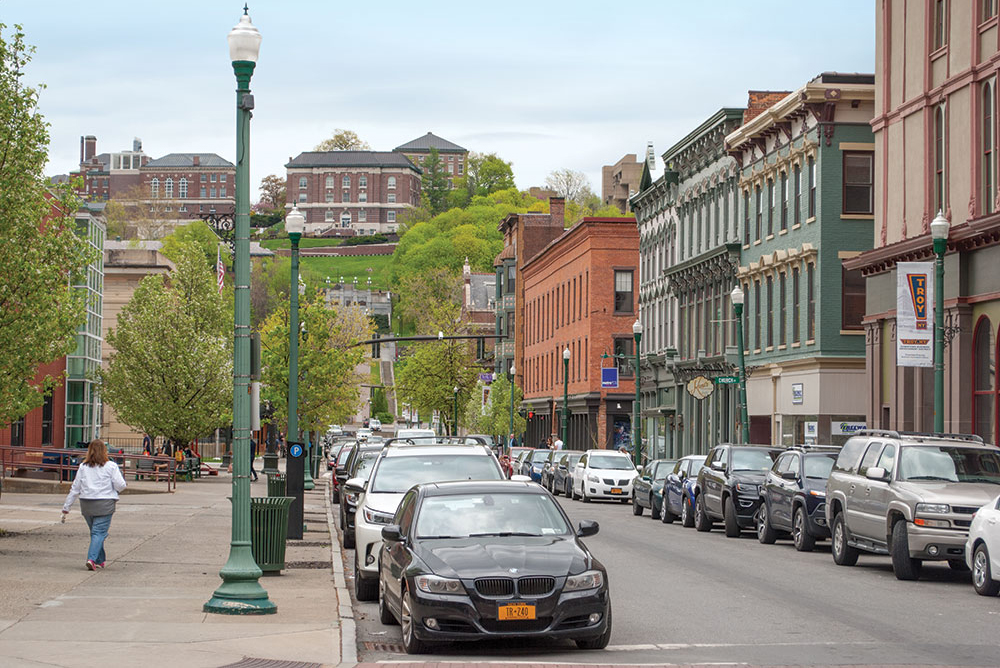 Transportation: Capital District Transportation Authority provides local bus service throughout Troy, Albany, Schenectady, and Saratoga. Albany-Rensselaer Amtrak Station is 8.8 miles from Troy, and Hudson Amtrak Station is 40.8 miles away. Nearby major thoroughfares include I-90 and the New York State Thruway.

The city of Troy is a goldmine of architectural gems. Once a bustling port at the convergence of the Hudson River, Erie Canal, and Mohawk River, Troy’s waterfront real estate was hot property during the Industrial Revolution. Factories and businesses, turning out steel products and so many shirt collars that Troy was nicknamed “Collar City,” grew like reeds along the shoreline, and with them, came a sizable population of workers and business owners. The arrival of Rensselaer Polytechnic Institute (RPI) in 1824 and Russell Sage College in 1916 sealed Troy’s status as a center of higher education as well as industry and affluence. At the turn of the century, Troy was the fourth-wealthiest city in the country, sprouting grand Victorian, Colonial Federal, Gothic, and Greek Revival homes and commercial buildings in its downtown.

But as the steel industry moved westward and shirt collars became passé, Troy’s population dwindled and its buildings sat empty. During Prohibition, Troy gangster “Legs” Diamond ran illegal hooch to Canada. But Troy has known all kinds of trouble. It’s burned down three times, undergone financial downturns, and lost its major and minor league baseball teams (both called the Trojans). Regardless, its magnificent buildings remain. Efforts to preserve Troy’s historic character include the addition in 1986 of the Central Troy Historic District to the National Register of Historic Places, which protects hundreds of antique properties over 96 acres.

The Burden Iron Works Museum, located on the Wynantskill Creek and the Hudson River in south Troy’s industrial district, walks visitors through a ca. 1813 iron products factory and the site of the Burden vertical waterwheel, the largest converter of water into electrical power of all time.

Today Troy thrives in part thanks to live performances at Troy Savings Bank Music Hall, renowned for its acoustics and well-preserved circa-1825 Greek Revival architecture, and the Curtis R. Priem Experimental Media and Performing Arts Center at RPI, known locally as EMPAC.

Meanwhile, in the daytime, the waterfront farmers’ market is held every Saturday year round—outdoors from May through October, and indoors from November through April—at the Troy Atrium on Fourth Street. Area vendors include Bornt Family Farms, Collar City Hard Pressed, Troy Brewing Company, and Sweet Sue’s cupcake shop and café.

Public outdoor spaces abound, including Peebles Island State Park with its walking trails and views of the Hudson and Mohawk Rivers, and Frear Park with its ice-skating rink and golf course, while the Children’s Museum of Science and Technology at RPI offers indoor, educational fun. Golf courses and country clubs, including the private Country Club of Troy and Van Schaick Island Country Club, pepper the area.

Troy’s median listing price is $134,000, making it one of the Hudson Valley’s most affordable markets. At press time, there were 280 single-family homes listed, mostly in the $100,000-to-$200,000 range. A 3,300-square-foot Dutch Colonial with five bedrooms near Emma Willard School lists for $365,000. The historically significant Curran/Barker House, built in 1842 and meticulously preserved, lists for $235,000. Loft and apartment rentals are available in historic brownstone buildings like Park Place Apartments, the Dauchy Building, and the Keenan Building; one- and two-bedroom apartment rents average $1,000 per month or less.