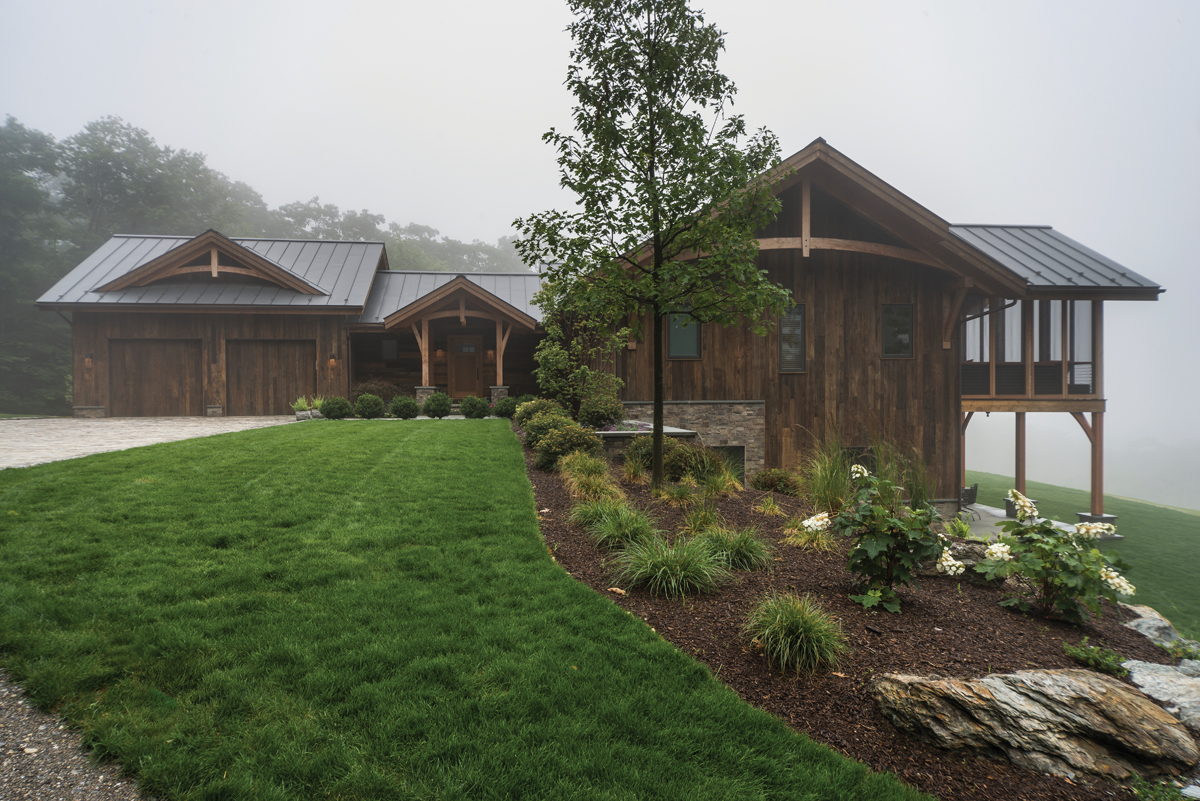 One glance at Greg and Dee Olsen’s stunning retreat, situated atop Bald Mountain in the Columbia County town of Austerlitz, and the word “balance” springs to mind. The project’s genesis stretches back nearly two decades, when the couple first stumbled upon a magical piece of property—100 acres of land with a three-acre pond offering views of New York, Connecticut, and Massachusetts—and dove in headfirst.

“We just knew it was spectacular and we wouldn’t find this ever again,” Greg says. The couple put every dollar they had (and some they didn’t) toward the purchase of this raw piece of land that sat vacant for almost 10 years; meanwhile, the Olsens gleaned inspiration from shelter magazines, constantly clipping photos of homes they might someday build. 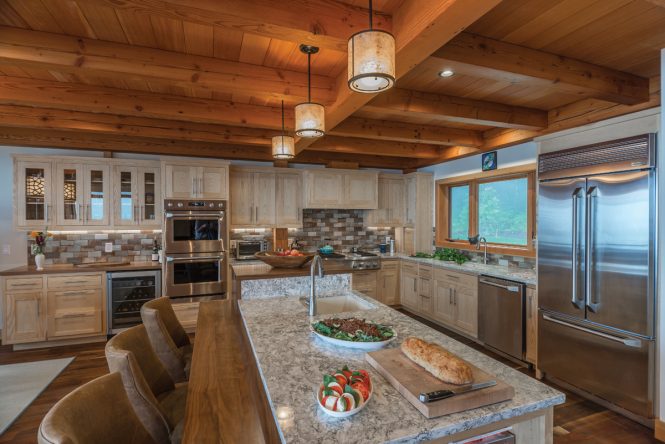 The home’s kitchen is tailormade to the needs of the owners, featuring custom ash and walnut cabinets and woodwork by NEWwoodworks and reclaimed wood wall paneling from Pioneer Millworks.

When the time came to craft their family’s retreat, extensive research led the Olsens straight to New Energy Works, a timber frame design-build company. “It was a wonderful collaboration,” Greg says, pointing to the seamless execution of each element architect Ty Allen advised—a real perk, realized in retrospect, of going with an all-inclusive company—beginning with siting the home.

Greg remembers standing on the clearing while he and Dee described their years-long vision—from what they would build to how it would face and why—when in five minutes nine years of planning evaporated. Allen walked about 100 feet to the east, another 50 feet to the north and declared with utter certainty: “You’re putting the house here.” While the Olsens had imagined an eastern exposure, Allen oriented the house facing directly south and employed windows to capture the alternate vista. The home’s rectangular footprint, marked by wooden stakes with strips of towel tied to the tops, was born that very day. 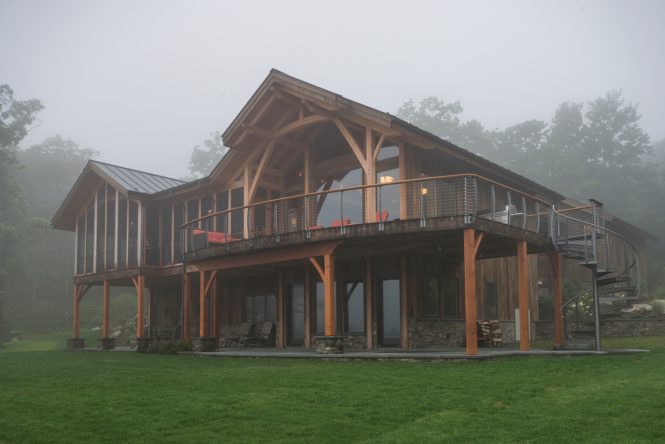 “There was no disconnect,” Greg says of the chorus of voices that came together in conversation to build the house. While timber framing resides at their core, integration is a key component of New Energy Works—as evidenced by several teams beneath a single umbrella: design and build; high-performance enclosures; mass timber; and fine woodworking. A shared philosophy ultimately led the way. 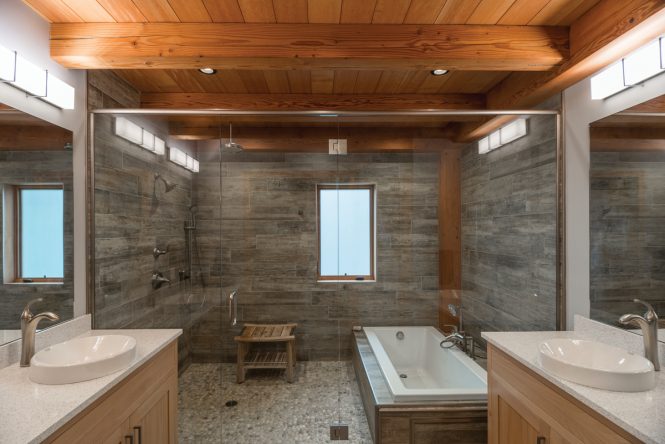 The Olsens, keen on striking balance in their design and creating a home in harmony with the site, stuck to a trio of non-negotiables: eliminating VOCs, incorporating reclaimed and organic materials, and utilizing a geothermal solar array (which, coupled with five Tesla back-up batteries, allows them to operate entirely off the grid when needed). Of secondary importance was cultivating a sprawling space for large family gatherings and a kitchen worthy of both cooking and congregating—with unobstructed south-facing views of Catamount and Ski Butternut in the distance.

“The homeowners were very involved in the process—while letting us be experts in our craft,” says Eric Fraser, general manager at New Energy Works. Save for a general contractor, local to the area, the Olsens’ project was done in-house by the NEW team. 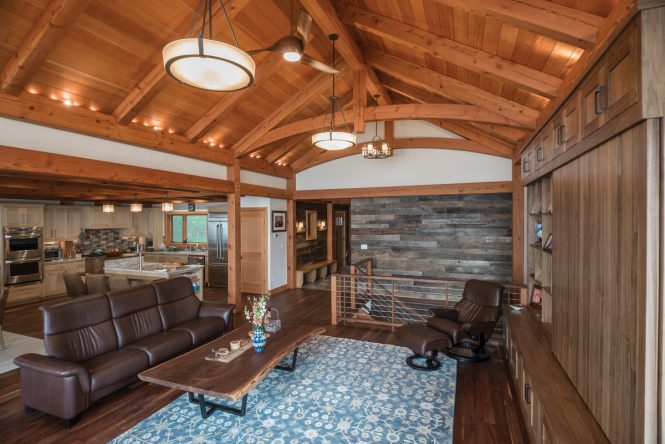 A Second Life for Wood

“We wanted to use as much reclaimed wood and recycled materials as possible in building this house,” Greg says, pointing to the bones of the 3,300-square-foot building: gorgeous 100-year-old Douglas fir beams with a natural patina that were already cured. A variety of recycled materials are echoed elsewhere throughout the house: flooring is reclaimed walnut on the upper level and reclaimed teak on the lower level; interior wall paneling is reclaimed barn siding (as are portions of the exterior siding); and craftspeople at NEW woodworks used reclaimed beech to fashion custom bed frames, night stands, and built-ins. 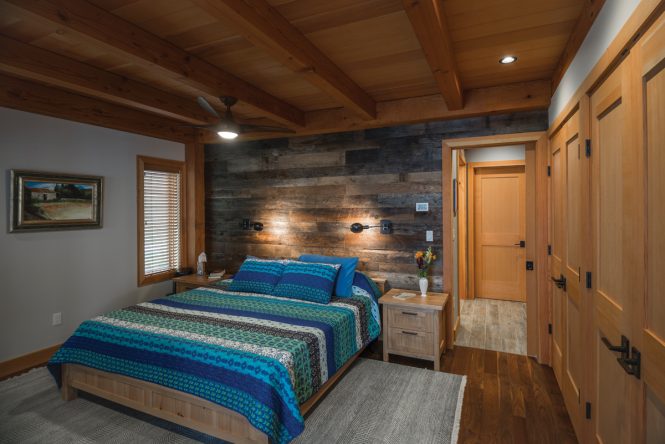 “We have always prided ourselves on the fact that we can tell any one of our clients exactly where [the reclaimed materials for] their project came from,” says Jered Slusser of Pioneer Millworks, sister company to New Energy Works, who for 25 years has worked with builders and architects, designers, and homeowners to help them navigate an extensive product line to find the right fit for every project.

The Olsens’ home is “a mixed bag of different materials and therefore different sources and stories,” says Slusser, pointing to the large quantity of reclaimed walnut used in their project as “one of the more crazy, unique things we’ve ever had”— gleaned from a giant Tennessee turkey farm and dubbed a single-origin batch. 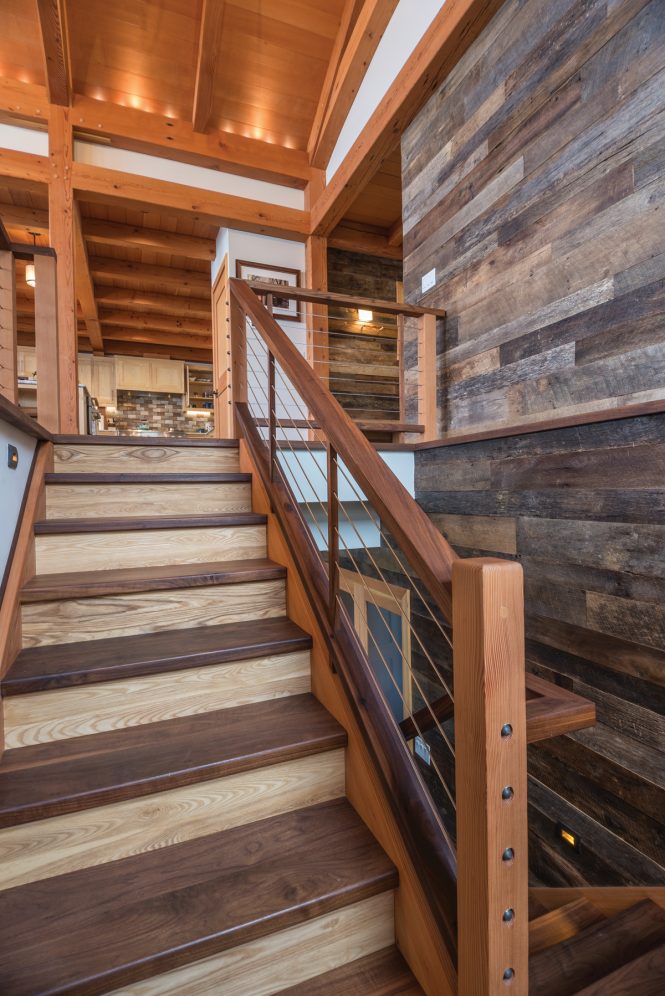 The custom staircase, crafted by NEWwoodworks, is made of walnut and ash, giving a two-toned appearance that complements the reclaimed wall paneling by Pioneer Millworks.

“We have this added advantage in the reclaimed world of having the people that use the material literally standing shoulder-to-shoulder with us,” says Slusser, who refers to the same grading specifications for fresh-sawn Douglas fir as for reclaimed timbers. He is schooled in the difference between a knot and a bolt hole, when it comes to adversely affecting the structural integrity of the wood—ditto for the number of nail holes and natural cracks. “This type of instantaneous feedback allows us to make sure that everything going to the job site is perfect.”

Because every timber is bar coded, Slusser can track their respective origin to locales like Chicago, New York City, and Boston—all steady sources of buildings (and in more rural areas, barns) being torn down. Once a good yield is identified, the team at Pioneer Millworks does their due diligence to ensure it is safe, environmentally sound, and free of any residual contaminants associated with the building from which the material was reclaimed; all of their hardwoods are Forest Stewardship Council Certified. 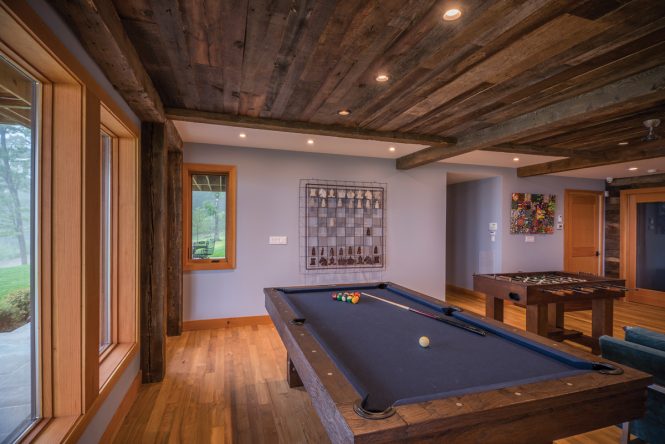 The game room has a more masculine feel than the rest of the home, featuring darker stained timbers and reclaimed ceiling paneling from Pioneer Millworks.

Greg and Dee leaned into their team’s deep knowledge and expertise to further customize their space. With increased pressure on commodity industries since March 2020, the cost of reclaimed wood has remained stable (though not inexpensive) while the price of fresh-cut white oak, for instance, has tripled in the past three years. When a colossal snowstorm crushed one of the warehouses storing the reclaimed material the Olsens had painstakingly chosen, Greg says “a great pivot” was necessary. Confident in the process of working with New Energy Works, they chose another type of wood—sight unseen—for finishing work and the custom kitchen cabinets and forged on knowing they would love the end result. “And we do!” Greg says. 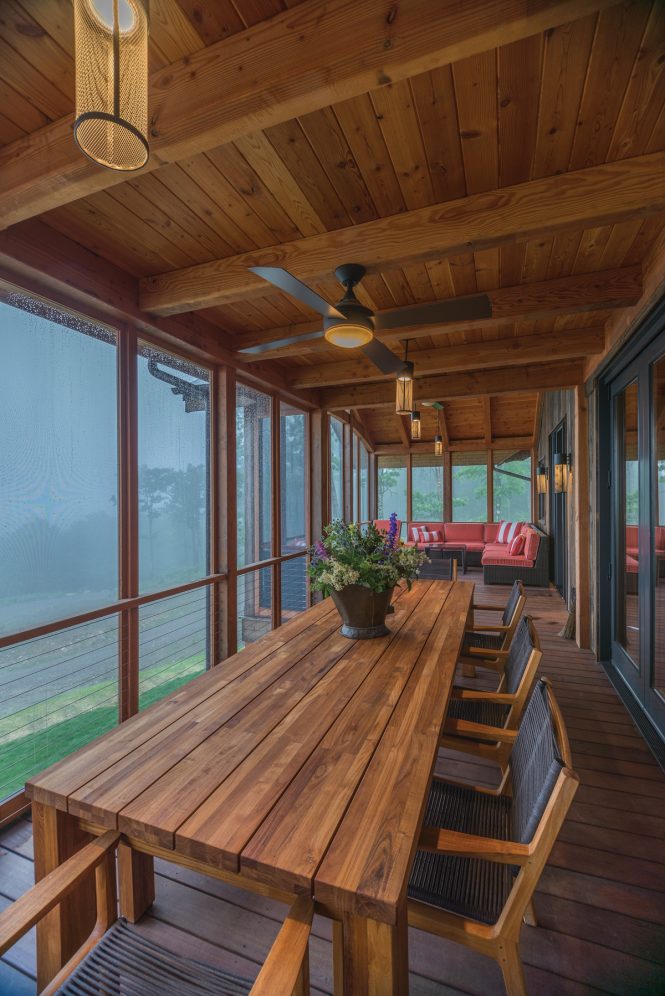 The home’s screened and covered porches are intended to blur the line between interior and exterior spaces.

The Olsens’ mountain-top home is situated to maximize views of the surrounding landscape and designed to be incredibly airtight and energy efficient—all while maximizing natural and sustainably sourced materials throughout. “The biggest aspect, when it comes to balance, is that the house is not too big; it was purposely designed to fit the needs of Greg and Dee and their family but also the site and surroundings,” Fraser says, pointing to screened and covered porches intended to blur the line between interior and exterior spaces.

From the deck of their home, the Olsens enjoy front-row seats as peak leaf season unfolds on their property. “There’s no better show than autumn!” Greg says, basking in expansive views punctuated by the vast array of golds and reds against a clear blue sky—something he never tires of looking at. “The house has this wonderful ethos about it that’s so calming,” he says. “It’s really a joy to be in.”