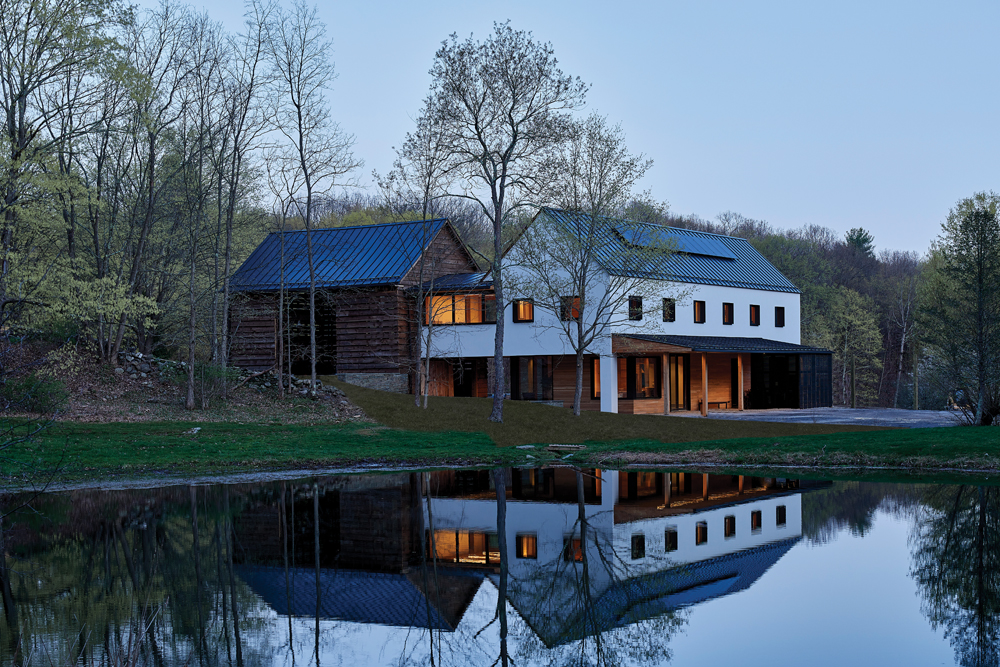 Take a leisurely drive along two-lane Route 7 through sleepy Gallatin, in the southern quadrant of Columbia County, and you’ll be surrounded by evidence of the area’s vibrant agricultural past and present. Close to the New York/Massachusetts border and situated about 30 minutes by car from the buzzing hub of Hudson, Gallatin is connected to the Hudson River via a tributary known as the Roeliff Jansen Kill.

The town was named for politician, diplomat, ethnologist, and linguist Albert Gallatin (“America’s Swiss Founding Father”), and the area it lies in was settled in the 1740s by Scottish immigrant farmers whose crops supplied New York City. While many of the historic farm buildings that were built in Columbia County over the ensuing centuries still serve their intended agro-industrial purposes, in recent years several have been remade into beautiful homes that incorporate sustainable, forward-thinking Passive House technology. A stunning local example of such innovation is the Gallatin Passive House, a residence designed and built by the award-winning Hudson Valley firm North River Architecture & Planning. 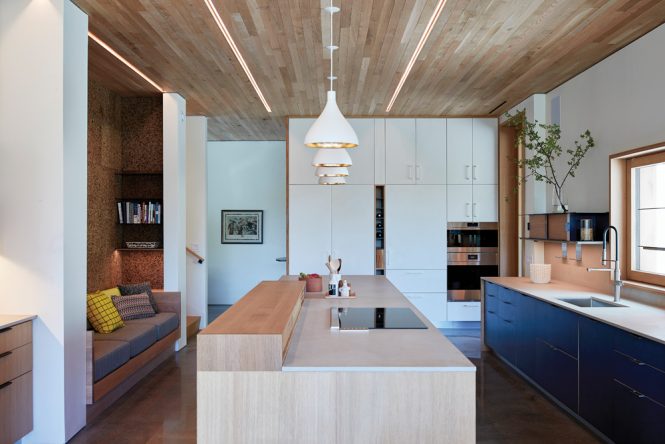 The 3,400-square-foot Gallatin Passive House project is fully net-zero-energy- and Passive House-certified and comprised of two structures: the main, two-story primary living portion, which has been newly built atop the site of a former horse stable, and an 18th-century Dutch Colonial barn, which has been fully renovated and retrofitted to become a year-round multiuse events/work/recreation/ storage space.

The two buildings are connected via the glass-walled “skybridge” that links the second floor of the main dwelling to a stair landing that descends into the 25-foot-tall, open-timber barn; the area beneath the elevated conduit, a semi-enclosed breezeway, accesses a covered porch space that’s perfect for outdoor dining and gatherings. The property’s original farmhouse now functions as an adjacent guest quarters; an on-site pool house with a wood-fired sauna also predates the new construction. Begun in June 2020, the bold rebuild and renovation was originally set for eight months but ended up being stretched to 10 months, due to COVID delays. 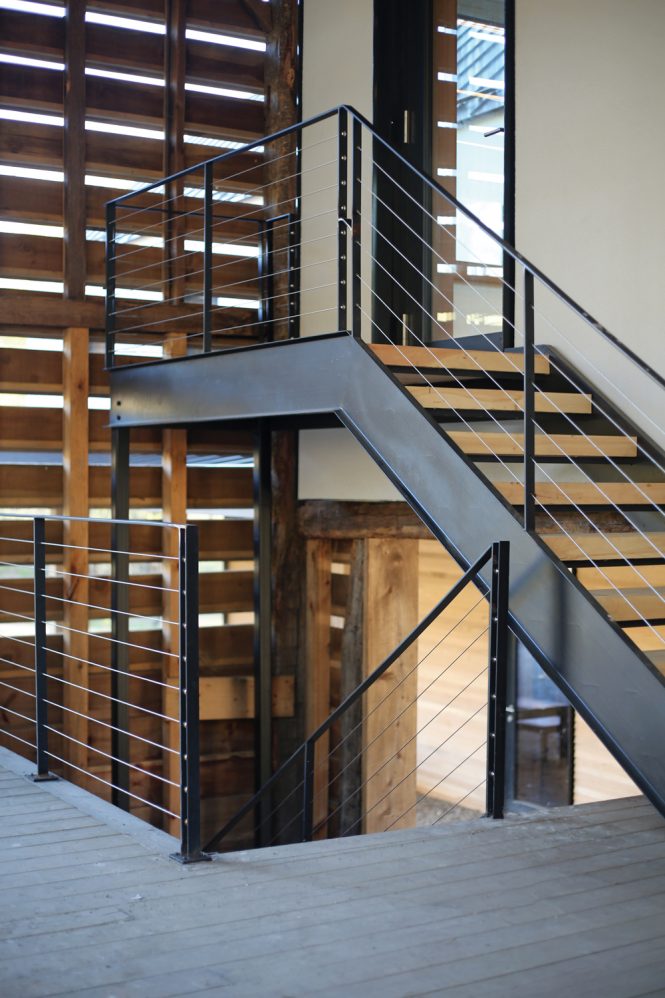 The intersection between the 18th- century barn and the stucco-clad Passive House, with a custom steel stair fabricated by Benson Steel. Scott Ruel Photography

The wait, though, was worth it—especially for the resident family, who throughout the process remained unwaveringly dedicated to North River’s design vision and the shared philosophy behind it.

“It was an ambitious project, for sure,” says North River’s principal architect, Stephanie Bassler. “But when they came to us, the clients were very clear and committed in their minds about [embracing] the ethics of managing their human impact on their environment by constructing an energy-efficient building.” 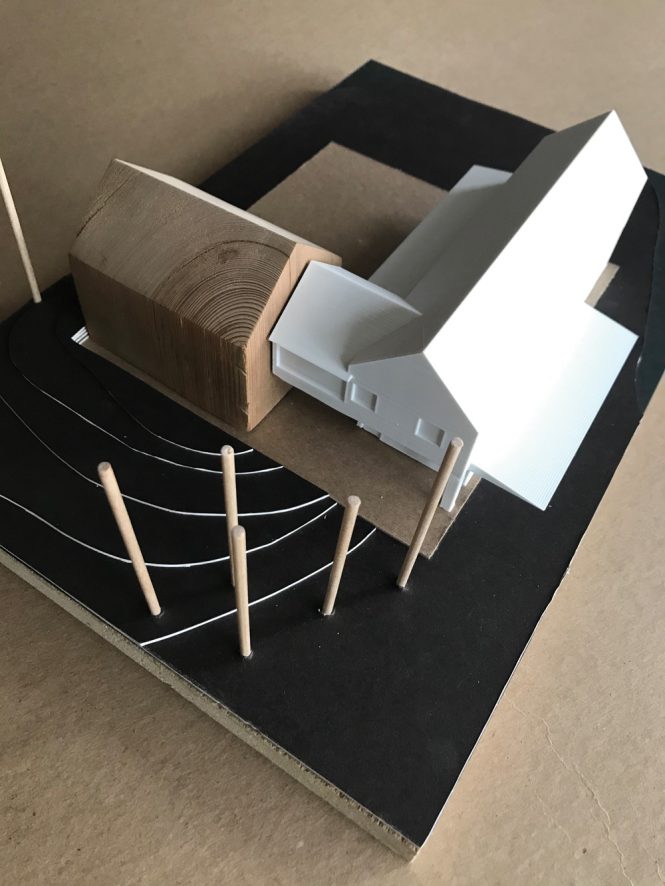 The oak of the covered roof areas comes to life with warm evening light, allowing the exterior to flow seamlessly into the living spaces inside. Photo by North River

Bassler, who is currently vice president of the Hudson Valley chapter of the Passive House Alliance and developed the Passive House-certified Women’s Leadership Center at the nearby Omega Institute, became interested in Passive House design nearly 20 years ago, when she was living and working in New York City. “A lot of newer design in New York was disregarding the effects of having poor energy efficiency,” explains the architect. “The clarity of the intention of Passive House was very appealing to me and inspired me to make a break: When I moved to the Hudson Valley in 2006 with my family, I decided to focus on energy- efficient design.”

Completely offsetting the home’s energy costs, a well as, of course, rustic-elegant design and maximum comfort, was paramount to the client—along with another factor: self-sufficiency, which is another staple element of North River’s work on its Passive House projects. 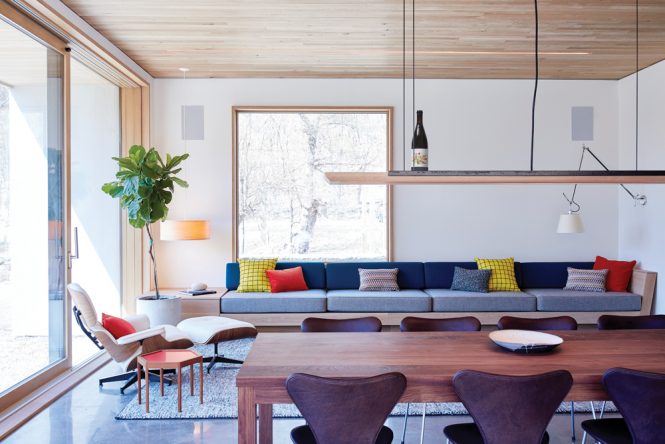 The open-plan dining and living areas

“The location of the house is pretty remote, so it’s designed to be climate-resilient and can function off-grid completely, if necessary,” says North River’s senior designer, Peter Reynolds, who has 30 years in the architectural field and has overseen sustainable private and public projects that include new dormitory and academic buildings on the Bard College campus and at the Omega Institute in Rhinebeck. “The active solar panels on the barn supply the battery unit, which can run the entire house’s electrical system fully for up to two weeks.”

Once it had been determined that the original, spartan horse stable was too small to be adapted for the needs of the family of five and their occasional guests, a unique design that builds on the concepts of North River’s Flexhouse III model was selected for the site (materials from the dismantled earlier structure were reutilized whenever possible; hand- hewn timbers from the stable, for example, live on as rustic, steel-reinforced interior elements of the barn). 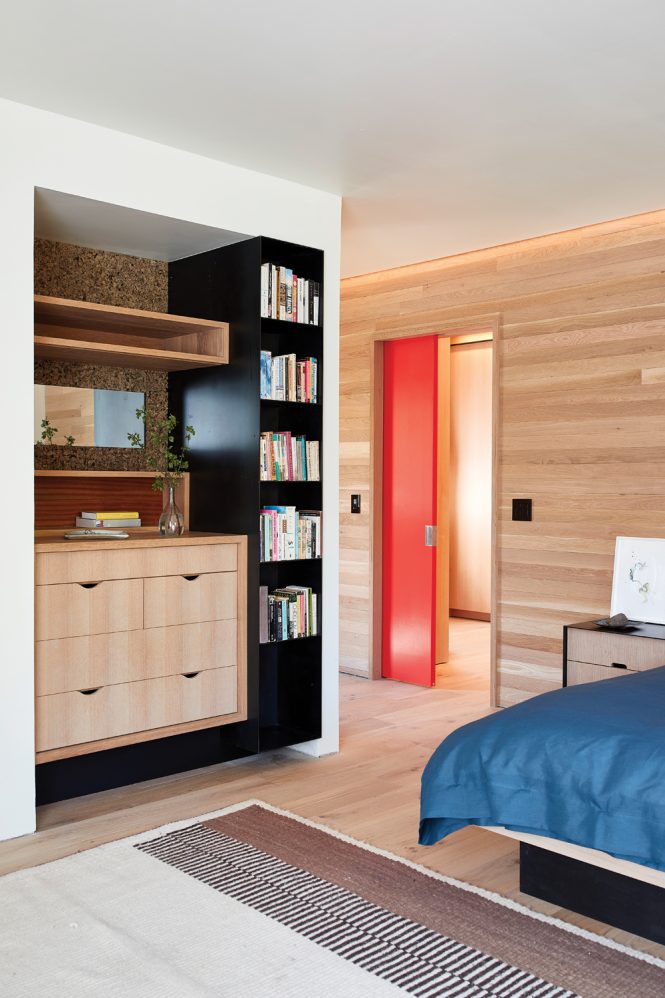 The clean- lined, three-bath house has four bedrooms on the second floor as well as a flexible common space that lends itself perfectly to homework by day and entertaining by night. The home’s open-flowing first floor is bright and spacious-feeling, thanks to the large, triple-glazed, screened M Sora windows, which maximize the warmth from the sun in the winter, and floor-to-ceiling, 24-foot lift-slide glass-panel doors, which offer sweeping views and give occupants the feeling of being outside while they have the comfort of being inside (the doors can be opened completely in the summer, for maximum airflow throughout the house). Sleek built-in storage units on both floors optimize living space.

In strict keeping with net-zero parameters, North River’s design minimizes thermal bridging to prevent energy loss. For a Passive House-certified seal, the new structure’s standing-seam metal roof incorporates tight outer sheathing and zip sheathing at the ceiling level, while the stucco-sided, two-by-six-framed walls utilize DensGlass sheathing, furring strips, and Polysio insulation; both the roof and the walls are also packed with cellulose insulation, which is composed of chopped-up newspaper. The concrete slab floor includes eight-inch rigid insulation and a vapor barrier, which eradicates mold by forcing moisture to the outside of the building. The structural designs permit future modification of the internal plan with minimal cost, allowing the implementation of new Passive House developments as they become available. 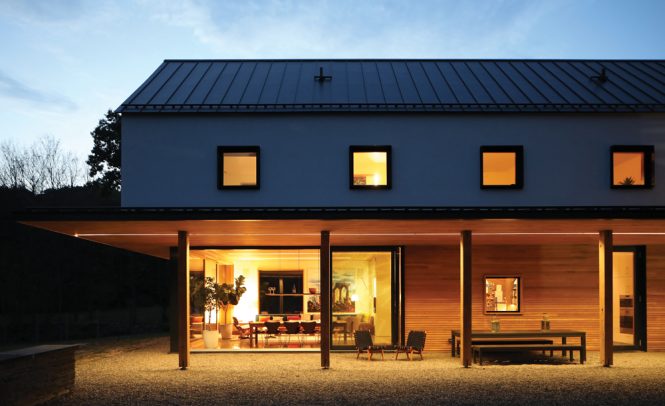 The oak of the covered roof areas comes to life with warm evening light, allowing the exterior to flow seamlessly into the living spaces inside.
Photo by North River

“With our readapting the barn and connecting it seamlessly to the new structure we built, this project was definitely more complex and ambitious than others we’ve done,” says Bassler about the property, whose permaculture garden further reflects the client’s commitment to a sustainable lifestyle. “NYSERDA [New York State Energy Research and Development Authority] is involved with every project we work on, and the Passive House Alliance is always pushing for more financial incentive programs to help clients who want to build or adapt existing homes to become more climate-sustainable Passive House units. Currently NYSERDA is offering incentives of up to $4,500 per unit, so now is a great time to consider a Passive House.”