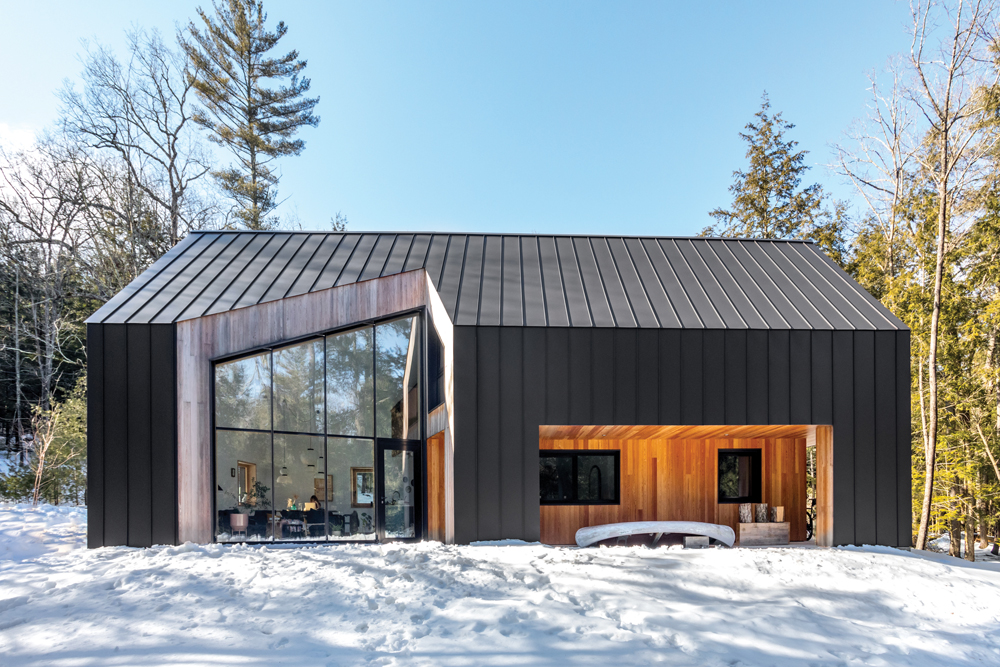 When architect Alessandro Ronfini and his wife, set designer and art director Astrid Chastka, started talking about building their own home in 2017, they decided to use Passive House standards to maximize efficiency. Olive House, Ronfini’s first Passive House project, was certified by Passive House Institute US last summer (it was also awarded Best Young Professional Project 2021 by PHIUS), and the couple—along with a newborn—are finally able to enjoy it.

Ronfini, who studied architecture in Italy before designing for firms in Copenhagen, prefers to think outside the norm: The result is a two-story, boxy, black house with an angular wooden bite taken out of it. “The design was inspired by a geode or a beaver biting into a tree—that sense of something being carved into,” Ronfini says. “I wanted the exterior to be like a monolith, while the interior is light, bright, and warm.” 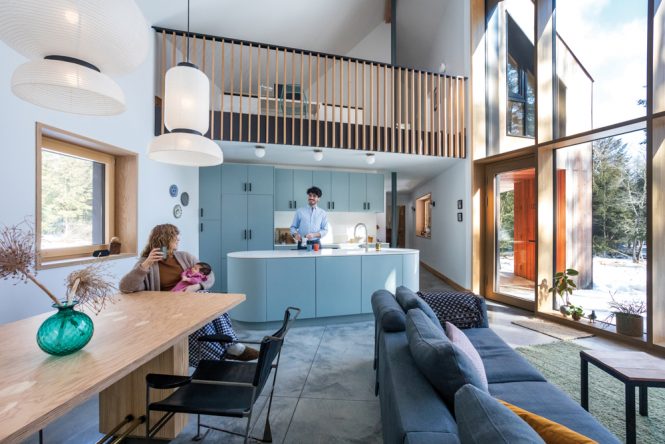 Ronfini and Astrid Chastka designed and built Olive House as a weekend getaway. The heart of the home is a two-story curtain wall of triple- glazed glass.

Olive House, in the Olivebridge woods of Ulster County, sits near a picturesque pond. “The pond sits east, and I needed to orient the house more toward the south to maximize the southern exposure,” says Ronfini, founding partner of DEMO Architects in Brooklyn. To allow the house to benefit from both the correct exposure and a beautiful view, a plan was formed: Angle the house 30 degrees southeast, then carve a 23-degree wedge out of the end of the house, much like you’d slice a wedge-shaped serving from an oblong cake. That wedge is a glass curtain wall that soars from the ground to the top of the two-story building, directing the view from the main living area to the pond.

The bulk of the 1,500-square-foot house is enveloped in black standing-seam metal siding, chosen both for solar gain and its predicted 30-to-50-year longevity. The wedge, a covered patio area adjacent to it, and the entire northwest side of the house are sheathed in Siberian larch. “I wanted to use untreated wood, but I didn’t want cedar,” Ronfini says. “Larch has a warmer color, and it’s denser and easier to work with.” No worries about shedding water, either: When larch is planed, Ronfini explains, the pressure and heat create a natural waterproof layer, like crystallized sugar.

The bedrock at the homesite was shallow enough that the slab foundation could be pinned directly into it—a strong yet surprisingly expensive process. Threshold Builders, out of Kingston, pre-built the house’s walls in panels offsite.
From the inside out, the walls started with two-by-fours that run from the foundation to the roof, supporting the roof as well as the walls themselves. Over that, five-eighth-inch ZIPsystem wall sheathing creates the main air and moisture barrier. Next came TJI joists—engineered-wood beams, similar to an I-beam, with a top and bottom with flange, and plywood in between—packed with dense-pack cellulose insulation. The insulation is held in place and protected by Pro Clima Intello Plus, an airtight membrane. Then, furring strips were laid, and the exterior was finished with either standing-seam metal siding or the Siberian larch. Any window and door edges were carefully taped with airtight Vana tape, per Passive House standards. 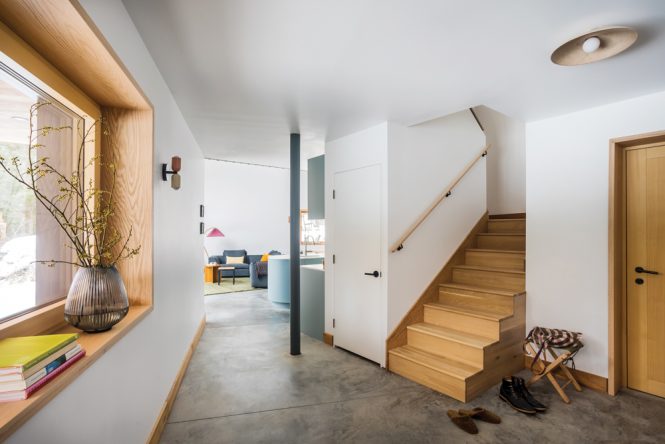 Floors and stairs throughout the home are a mix of concrete and red oak. Red oak was also used in the window casings.

The heart of the home is the stick-built curtain wall. Triple- glazed glass rises two stories, framed by that glowing Siberian larch. A similar but smaller rhombus-shaped window mirrors it on the opposing edge, affording light and ventilation to one of the three bedrooms. The interior of the curtain wall comprises wooden mullions that are wide enough to serve as seating and shelves as well as provide some shading when the sun is at certain angles. Although the angle of the carved-out wedge was designed to minimize solar gain in the summer, additional shade was needed. So Ronfini installed exterior roller shades that work well, but cannot withstand winds greater than 25 mph when extended. In retrospect, Ronfini says, he would have preferred interior shades: As the house is a weekend home for Ronfini and his family, the exterior shades need to be rolled up when the family is away.

Homestretch, Then a Snag

Installing the wall panels built by Threshold onto the foundation took just three days, then work began on the roof. A ridge beam is supported by three steel beams that run all the way from the foundation. Rafters were made from TJI joists with ZIPboard and taped edges. Over that, 10-inch foam insulation was laid that had OSB (oriented strand board, an engineered wood) glued over it as a nailing surface. Solitex, a wind-tight, breathable membrane, is the underlay between the OSB and the standing-seam metal roof, to allow condensation to drain off. Ronfini masterfully designed the corners and edges of the entire exterior to allow rainwater to fully drain down to the ground and avoid visible gutters. 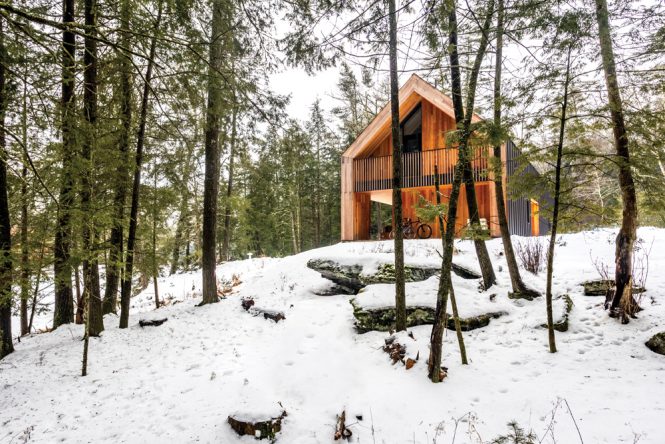 Overhanging eaves of Siberian larch form a protected balcony off the primary bedroom as well as dry space for storage.

Once the home’s envelope was installed, Ronfini expected that work on the house would proceed full-steam ahead. Then COVID-19 hit. Ronfini and Chastka were left to install the larch siding, the red oak floors, and window casings themselves, with the help of friends.

The interior of the house is light and bright, and comfortable thanks to a Zehnder ventilation unit with a preheater for the supplied air. The home runs on electric, and uses about 7,000 Kwh/year compared with the 13,000- plus Kwh/year that would be expected in a traditional build of that size. The compressor is stashed in a covered side of the house, under the primary bedroom’s balcony and next to an outdoor shower. As the home is not a full-time residence, Ronfini installed a tankless electric water heater instead of a full-size water heater or traditional heat pump. Mini Split untis provide additional heat and air conditioning, too. Thanks to its Passive House construction standards, the Olive House consumes about 80 percent less energy than a traditional build.

Ronfini and Chastka tried to recycle furnishings when they could, such as sourcing a retro 1960s pink lavatory sink for one of their two bathrooms from Zaborski Emporium in Kingston. Another unique build was the dining table: When the ridge beam for the roof was miscut, the waste was used for the table’s legs. 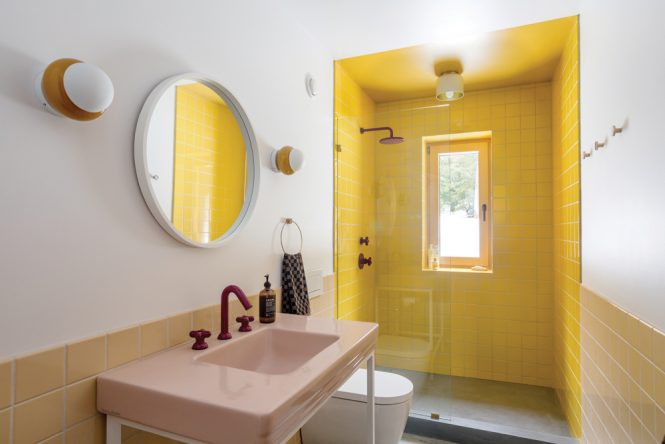 This pink lavatory sink—a vintage find from Zaborski Emporium in Kingston—complements the vibrant yellow tile in one of the house’s two bathrooms.

The home’s decor leans toward the minty, pastel themes of that Mid-Mod period, with a soothing blue kitchen, a pink-and-yellow bathroom, and living room furniture that speaks “The Jetsons,” with curvilinear edges and stick legs. The kitchen island that holds the sink is an oval, formed by adding plywood curves to either end of an IKEA stock cabinet. Under-cabinet lighting brightens the prep area around the main bank of sleekly designed light blue cabinets.

An office is tucked in a loft under the eaves, carefully positioned to avoid the sun’s glare on computers but still allowing a view of the pond. Also upstairs: a 117-square-foot bedroom with the wedge window and a 335-square-foot bedroom with a door out to a small balcony. Downstairs, the two-story-tall, open living/ dining/kitchen area is bathed in light, and supplementally warmed with a wood stove. A third, 133-square-foot bedroom and a bath are at the opposite end of the house.

Ronfini and DEMO Architects are working on other projects now, but the Olive House remains special for a multitude of reasons, not the least of which is that he’s actually living within his creation. “If someone is curious about the work we do, I can say, ‘Stop by, come see it. Look at what went right, and what we would change,’” Ronfini says. “They can see our attention to detail, first-hand.”