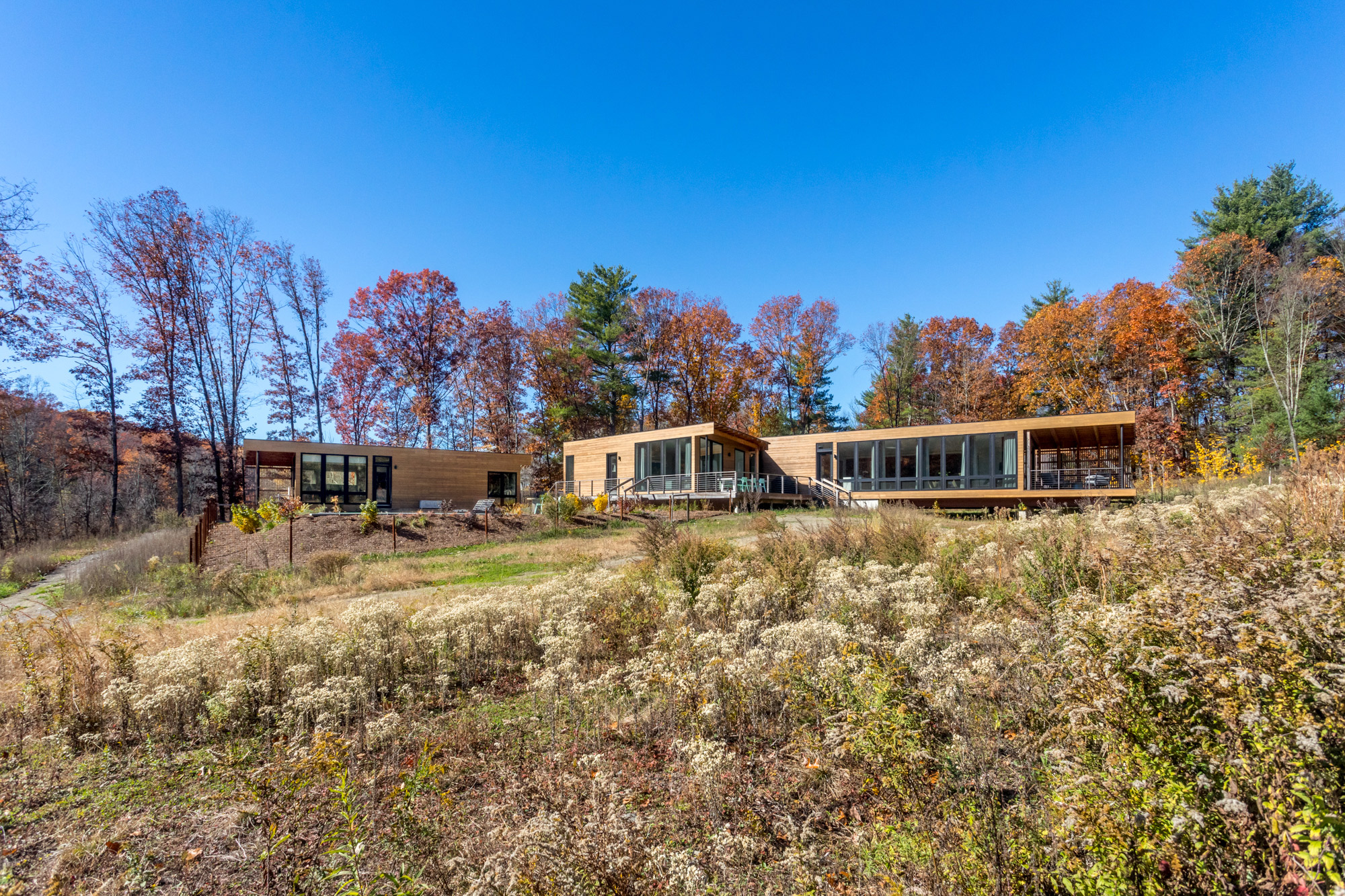 In a spectacular setting surrounded by a 360-degree ring of trees, a couple from Brooklyn watched builders assemble their country home. Rumbling trucks delivered the components and a giant crane lowered the pieces into place. “It looked like children playing with blocks, but in slow motion and with a lot of precision,” says one of the owners.

This isn’t your father’s modular home, it’s House One, a showpiece of the Milan Case Study, an experiment in luxurious modern minimalism located on the site of a former dairy farm in northern Dutchess County and divided into 10 lots of about 10 acres each. 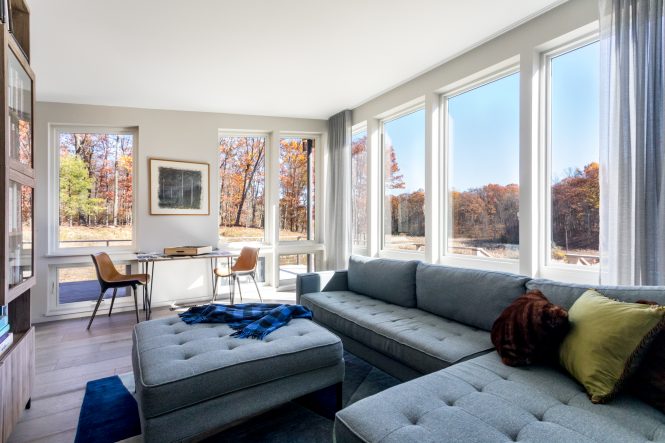 “The tool I work with is modular, and there are lots of interesting architectural possibilities that come with it, but the whole trick is to defeat the module,” says architect James Garrison. “These homes are humane and idiosyncratic.”

Some of the 36 projects presented in the publication only existed on paper, but others, including Stahl House in Beverly Hills, Eames House in Pacific Palisades, and Triad House in La Jolla, which the local historical society called “the most important single-family home in the La Jolla community,” still stand as iconic achievements.

“In the western part of the country, the perception of modular construction is different than it is here,” says Nick Mahedy, principal of Milan Case Study. “It’s not necessarily thought of as a low-end product. There’s a lot going on now in the Hamptons and things are beginning to shift with modular.”

Building homes under controlled factory conditions eliminates weather delays, reduces waste, and drives down costs. “Everything is thought-out beforehand in a way that doesn’t happen with stick-built homes,” says Mahedy. All it takes to assess the solid build at House One is to knock on the granite-like interior wall of the unfinished garage module. 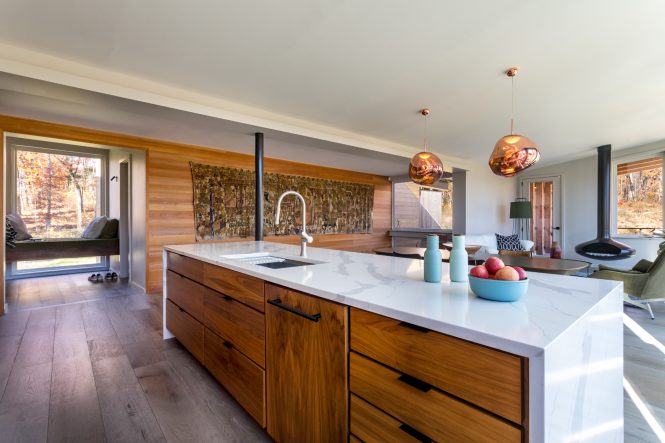 Creating the 2,723-square-foot main compound on a single level, augmented by ample deck space, makes the house feel like a miniature resort.

If there is a stigma associated with modular—and project architect James Garrison is aghast that this could still be the case—it is perhaps due to being mistaken for trashy trailers, also called mobile, prefab, or manufactured homes.

Besides the build quality between manufacturers, the only difference is that mobile homes conform to federal standards and modular homes are built to the local code of jurisdiction, says Robert Capenos, executive director of the New York Housing Association, a modular home trade group located in Latham. “New York is the number one destination for modular homes in the country” at around 1,200 per year, says Capenos. “It’s a niche market, but modular has a strong high-end component. The sky’s the limit and from the top end to the bottom, it’s the best-kept secret in single-family housing.”

The secret is well-kept indeed. From the time Thomas Edison filed a patent application for a single-pour concrete home design in 1908 that failed to catch on, architects and developers have been stymied trying to make modular a more mainstream choice.

One drawback these days is that transportable homes cannot exceed 14 feet in width, the largest load allowed on the roads, says Garrison, a modern modular master who completed two similar projects in Catskill: another Case Study House and Piaule Catskill, a boutique hotel/resort where guests stay in prefab “cabins” that look more like the world’s most elegant shipping container than what we normally think of as cabins. 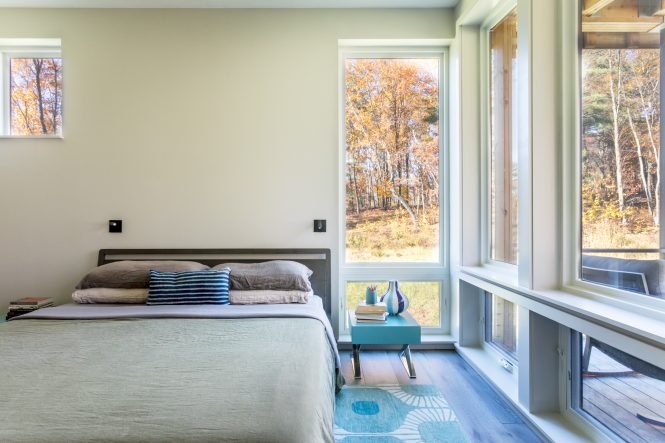 “Any art form has limitations, which drive innovation and artistry, whether it’s the size of your canvas, the brush, or the pigment,” says Garrison. “The tool I work with is modular and there are lots of interesting architectural possibilities that come with it, but the whole trick is to defeat the module. These [Milan Case Study] homes are humane and idiosyncratic. They don’t look like they came from an assembly line.”

Garrison is also an evangelist trying to inspire a great awakening for duplicable homes. “There’s no reason why this model can’t be a prototype for high-quality, more affordable, mass-produced modern homes,” he says. “It’s great fun figuring out how to get factories to become inventive.”

The basic template of House One in Milan offers three bedrooms and 2.5 bathrooms, which can be expanded to include up to six bedrooms and more bathrooms. To surmount the 14-foot-wide limit, the two main rectangular modules, built with only one outside wall, sit at a slight angle to each other, like a wedge, and are connected by a site-built floor and ceiling frame. This piece serves as a hallway that expands the footprint and adds drama to what could have been a drab, constrained interior.

The owners modified the standard issue by placing a half bathroom here, a reading nook there. They also built a wall that turned a bedroom into an office. More substantial additions are available a la carte. “We got hungry and bit,” says one owner.

Pool? Sure. A smaller module containing a mother-in-law apartment, added as an appendage between the kitchen and the mud room? Indeed. How about a 595-square-foot standalone unit with a garage and a secluded office for the owner who often works from home? Absolutely. 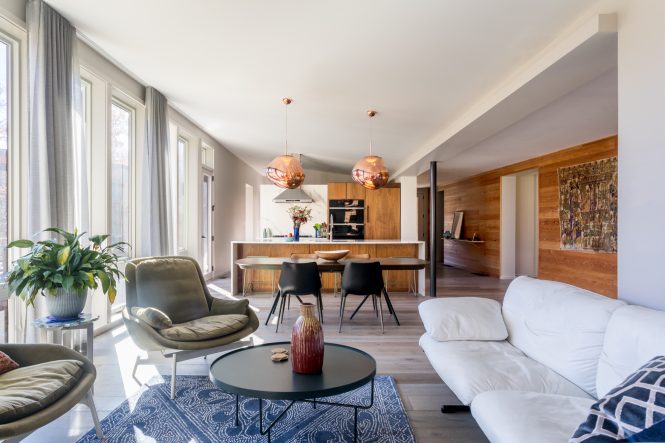 The great room looking toward the kitchen and dining area. Covering the wall at the right is an 18-foot Rajasthani phad painting, a family heirloom of one of the owners.

Placing the 2,723-square-foot main compound on one level, augmented by ample deck space, makes the house feel like a miniature resort. It can take time for some people to become oriented to the unusual layout. “Some guests have gotten confused and lost their way in here,” says one owner.

The couple also added a geothermal system that, in conjunction with the expansive windows and planned solar paneling, will take the property to near-Passive House status.

At Milan Case Study, buyers can also pick their own plumbing, flooring, countertops, appliances, and bathroom floor tiles. Three of the baths in House One are adorned with concrete popham design tiles from Morocco. The other one features Clé Tiles. “One way to elevate modular homes is to install finished surfaces on-site rather than in the factory,” says Mahedy. House One features oak floors, Brooklyn-made Watermark Designs bathroom fixtures and custom walnut cabinetry in most of the rooms, including the bathrooms.

Siberian larch gives the exterior a sleek-yet-earthy appearance and also accents several interior walls. “This is a naturally rot-resistant, long-lasting wood,” says Mahedi. “There are 700-year-old buildings in Europe made from this type of tree that are still standing.”

The rectangle motifs that dominate the home’s interior are softened by a round table, two orb-shaped lamps, and an oval fireplace suspended from the great room’s ceiling. Adding a funhouse effect, the roofs tilt upward, like an open lid.

Visitors enter the home on a blind side in the back, their gazes drawn toward a far-away window akin to a vanishing point. Down a narrow hallway past a bedroom, bathroom, and the pantry, the home expands, eventually revealing the wall of windows in the great room and creating a dramatic effect that would be lost if people first stepped into a grand space.

Where the modules fan out, eight large floor-to-ceiling Andersen windows (and a glass door) showcase the serene outdoor scene. A stream snakes through the landscape, cattails wave in the breeze and a small ridge rises in the distance. Decks that extend from the master bedroom, the great room, and the detached office provide another evolved touch. 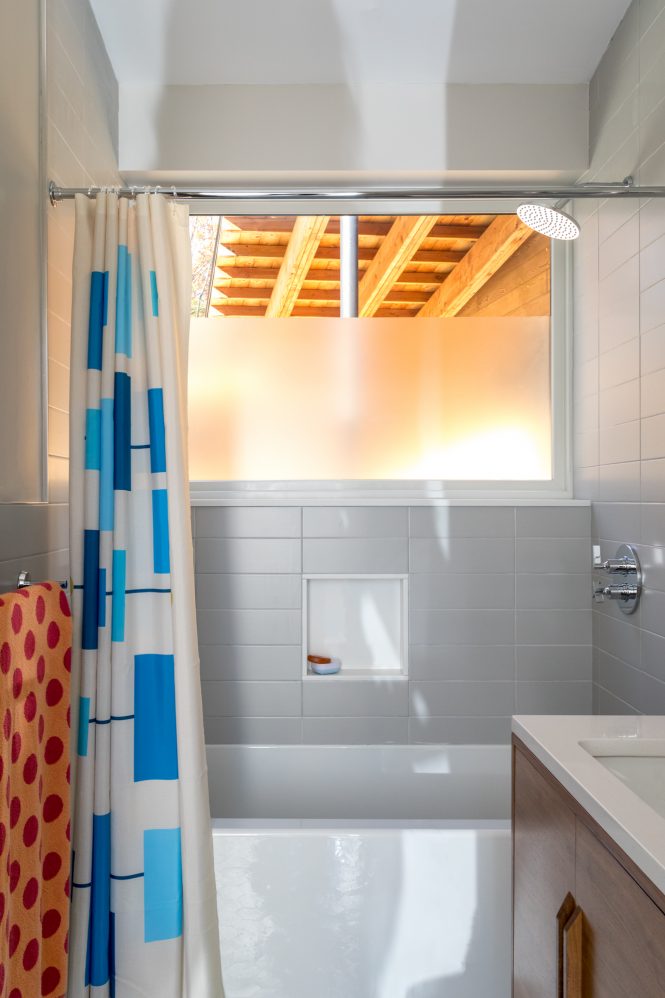 The basic template of House One offers three bedrooms and 2.5 bathrooms, which can be expanded to include up to six bedrooms and more bathrooms.

One of Garrison’s goals is to draw the outside in, which he achieves with understated techniques beyond big windows. The main modules at House One rest on I-beams, resembling boxcars on a railroad track, and are cantilevered off the ground via a contoured foundation that includes just enough concrete and supporting piers to balance the house and harmonize it with the rolling terrain.

This non-site-specific construction, which can place a modular dwelling anywhere with the proper engineering, represents the minimalist ethos in action. “We want to touch the Earth as lightly as possible and integrate with nature,” says Garrison. The effect enhances the visual theatrics and allows the home’s interior to soar above the landscape.

Even if modular construction represents a tiny fraction of the market, the buyers of the first Milan Case Study house are pleased. “With the light, the setting, and the tilted ceiling, this place goes to 11,” says one owner. “It feels so peaceful.”