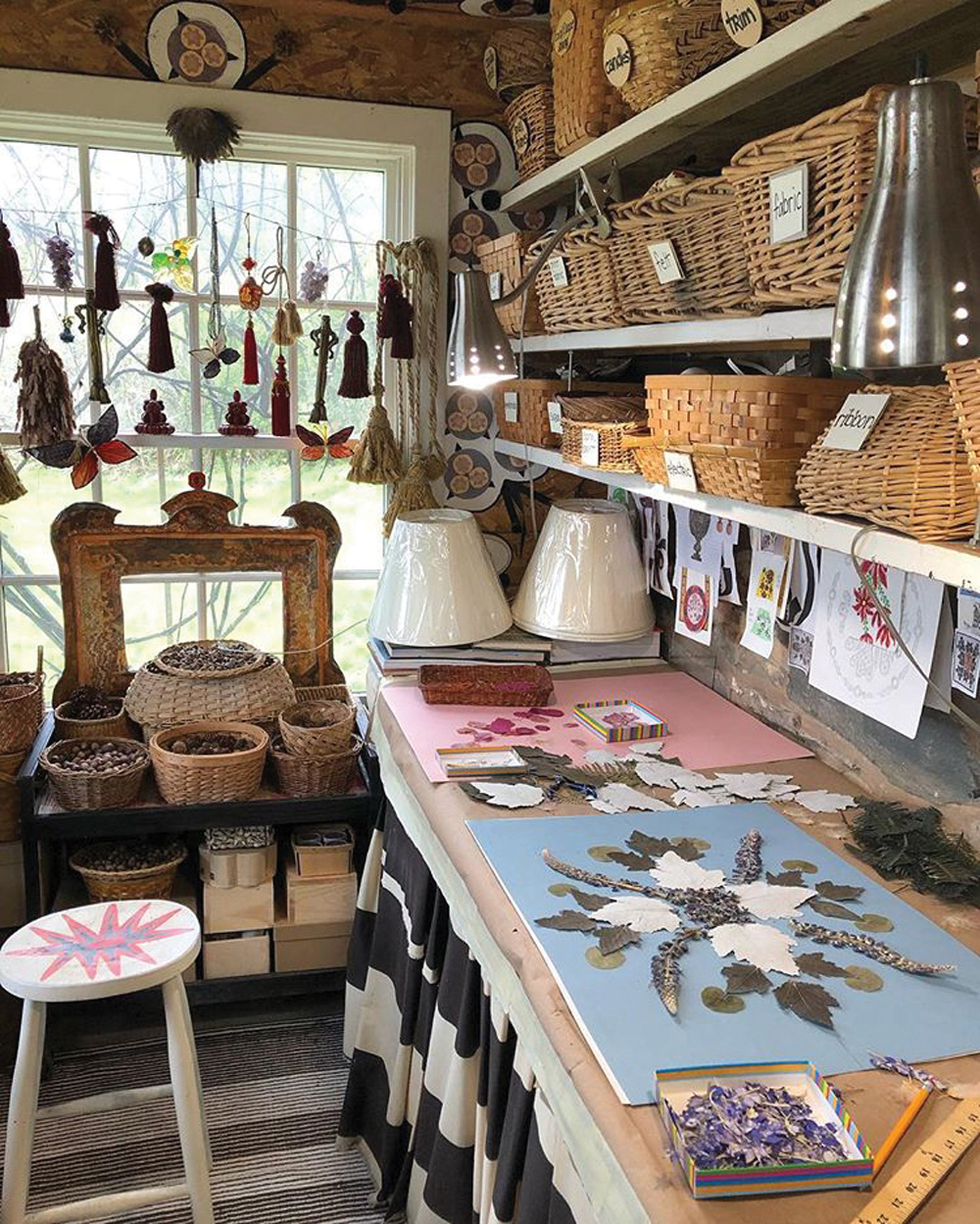 In the fashion and design publishing world, Marian McEvoy is an icon. The former European editor of Women’s Wear Daily and W in Paris, founding editor of Elle Décor, and editor-in-chief of House Beautiful, McEvoy won a place on Vanity Fair’s International Best Dressed List Hall of Fame. But in 2002, she left the fashion and design world and retired to her 18th-century farmhouse in Wappingers Falls, which she has owned since 1997. 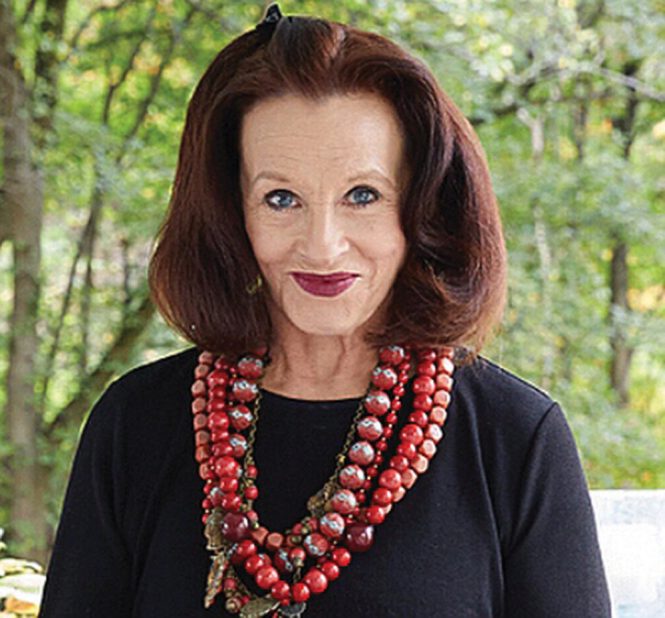 Naturally, she began redecorating her home, sewing draperies and reupholstering and painting furniture, which eventually led to her creating objects of her own that demonstrate her eye for the unusual. McEvoy’s first book, Glue Gun Decor: How to Dress Up Your Home—from Pillows and Curtains to Sofas and Lampshades (Abrams, 2005) features easy-to-follow instructions for 50 home-decorating projects inspired by her personal experience.

McEvoy’s craftwork falls into three categories: large mirrors, boxes, and frames that are decoupaged with cork and items from nature; small, framed collages of leaves, berries, and pressed flowers sourced from around the world; and “architectonics”—whimsical architectural structures whose designs are reminiscent of the work of the late architect and interior designer Bill Willis, who specialized in Moroccan décor and whose life’s work McEvoy memorialized in the book Bill Willis (Jardin Majorelle, 2011). 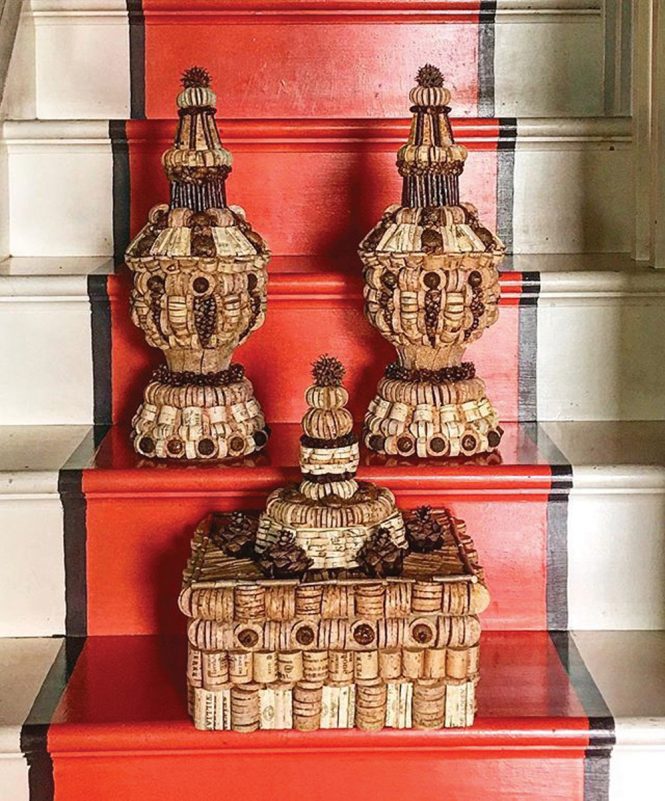 The large-scale architectonics are created mainly using corks, pinecones, and acorns from around the world. “I used to collect the materials myself—the leaves, corks, and various other needs—which was a nice part of the process,” McEvoy says. “Friends would bring me corks. But now that I have many more commissions, I source what I need on Etsy.”

Some of the pieces are left in their natural colors, while others are spray-painted in McEvoy’s signature shades of red, black, and white. Her technique is surprisingly straightforward. “You just find a shape—a rectangle or a cone—to start,” she says. “Nothing is drawn out or measured, because I don’t have the patience to do that. It’s more fun to jump in, glue the first piece, and you’re off.”

The architectonics, which are available in New York City through Eerdmans Fine Art, the Jane Stubbs Pop-Up Shop, and design boutique KRB, became so popular that McEvoy built an addition onto her house to create a craft room. The cozy room features two large windows and is lined with shelves stacked with baskets containing supplies along with the reusable hand-drawn place cards McEvoy makes for her frequent dinner parties. The craft room is also stocked with more than 25 types of glue—although she wields a glue gun for her larger pieces, McEvoy applies glue by hand for the smaller, more delicate ones. The walls are made of particle board to allow her to tack up ideas and notes. 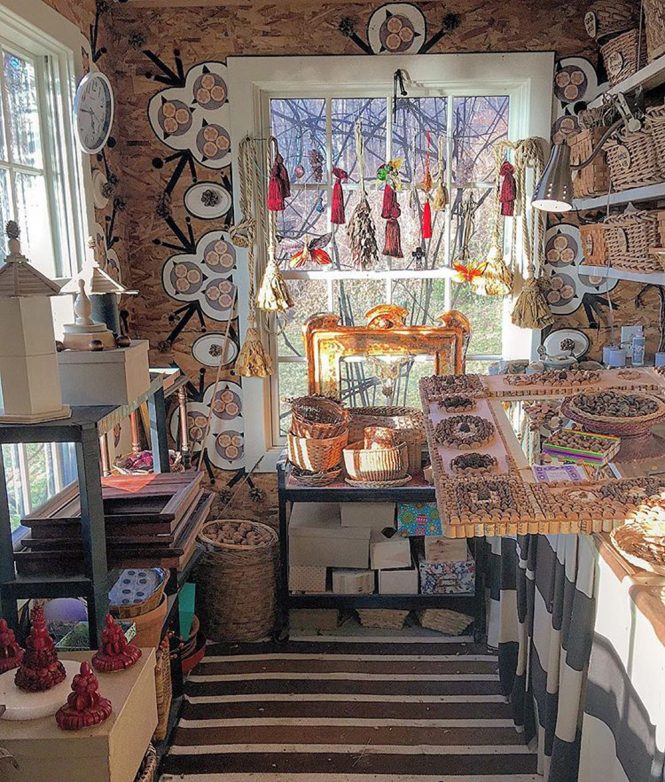 Currently, she is working on a series of dinner plate designs for interior designer Christopher Spitzmiller and a line of fabric designs with textiles designer Kerry Joyce. But as long as there is a demand, she plans to continue to create her architectonics. And even though she is constantly working, McEvoy has no desire to stop doing everything herself.

“It’s definitely a solo operation,” she says. “I prefer it that way—the homemade, the presence of the hand, with every line willed and thought out by me. It’s a one-woman show. I’m a do-it-yourselfer—always have been—but now I’m able to do it full blast, which is wonderful. I’ve never worked harder or with more pleasure.”

But while McEvoy’s predilection for crafting has morphed into a second career and won her international media coverage and a loyal following of collectors, she refuses to consider herself an artist. “I know artists, and I am not one,” she says. “You can call me an artisan, a craftsperson. I love tramp art, folk art, anything hand done. What I do is quite naïve; it’s intricate, but it’s not perfect.”