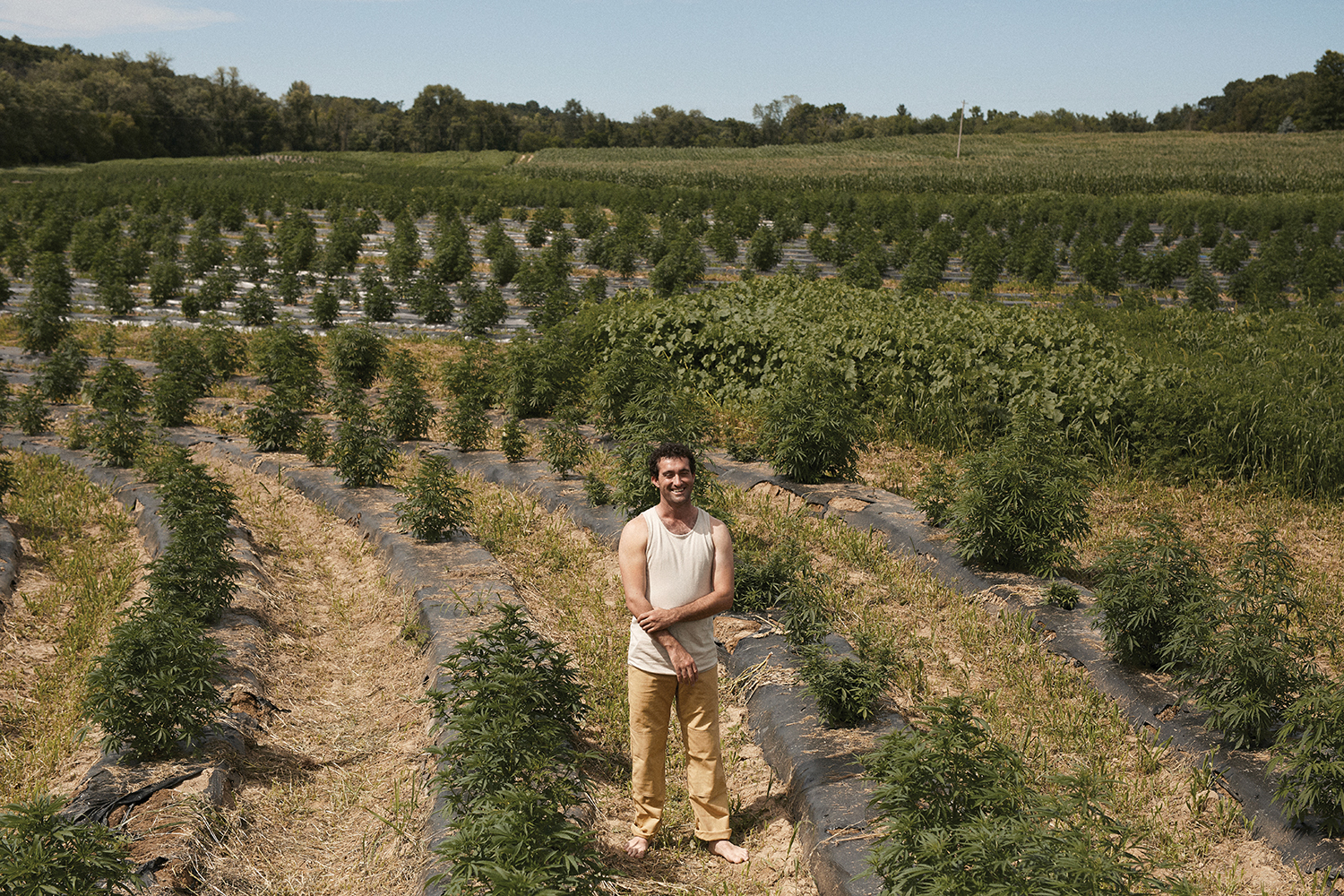 Ben Banks-Dobson, managing director at Hudson Hemp, grew up with his hands in the soil and his mind on its health, tending organic greens on his father’s two salad farms, located on the borderlands between the Berkshires and the Hudson Valley. In 2001, at age 17, he began his own CSA; then, after some college, he took off to farm coffee in Haiti, where he met his wife, Nalise Polyte Dobson; in 2007, the couple returned to the US with their growing family—they now have four children—to take over a 170-acre organic greens operation in Bowdoinham, Maine, where Banks-Dobson founded Atlantic Organics.

“A guy from California had brought a lot of his equipment east and set up an East Coast operation similar to what they do with greens in California,” he explains. “My dad used to buy salad greens from his farm in the winter. He wanted to sell and gave me a lease/purchase agreement on it.”

Atlantic Organics became the largest organic vegetable farm in Maine. In 2008, Banks-Dobson also founded Locally Known LLC, a salad processing company that sold pre-packaged, ready-to-eat salads to Whole Foods Market, Hannaford, and Trader Joe’s in the Northeast and Mid-Atlantic regions. Eventually, he sold both enterprises to the company that produces Olivia’s Organics and set about studying permaculture—the development of agricultural ecosystems meant to be both sustainable and self-sufficient. 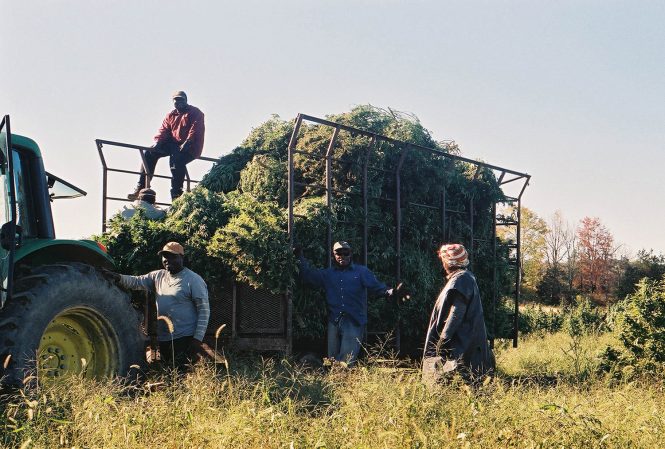 The farm field crew brings in the 2018 harvest.

In 2012, Banks-Dobson and his family were living in the Dominican Republic, where he was setting up a biodynamic banana farm, when he received a phone call that changed his life: his younger sister Moira had been tragically killed by a repeat drunk driver, and he was drawn home.

But he was needed back home for more reasons than he knew. Peggy McGrath Rockefeller, founder of the American Farmland Trust and the wife of the late Chase Manhattan Corporation head David Rockefeller, had bought and preserved nearly 3,000 acres of prime Columbia County farmland in the 1970s and ’80s, and her children—Abby, David, and Peggy—needed help transitioning the land to organic.

Banks-Dobson soon found himself with two jobs: manager of the Hudson farm Stone House Grain, finding ways to meet the seed-and-feed needs of the local farming community using holistic management techniques, and director of Hudson Carbon, an open-source collaborative research institute with the goal of combining profit and soil health.

Giving back to the earth

He certainly would. With its large shop, lab building with business-quality internet service, and big 1850s farmhouse for office and organizational space, Old Mud Creek Farm was the perfect place for the founding of Hudson Hemp.

Besides having a well-documented laundry list of end uses, Banks-Dobson knew that hemp remediates damaged soil. So he formed an association of regional farmers focusing on regenerative agriculture and soil science in the cultivation of organic, sun-grown hemp. 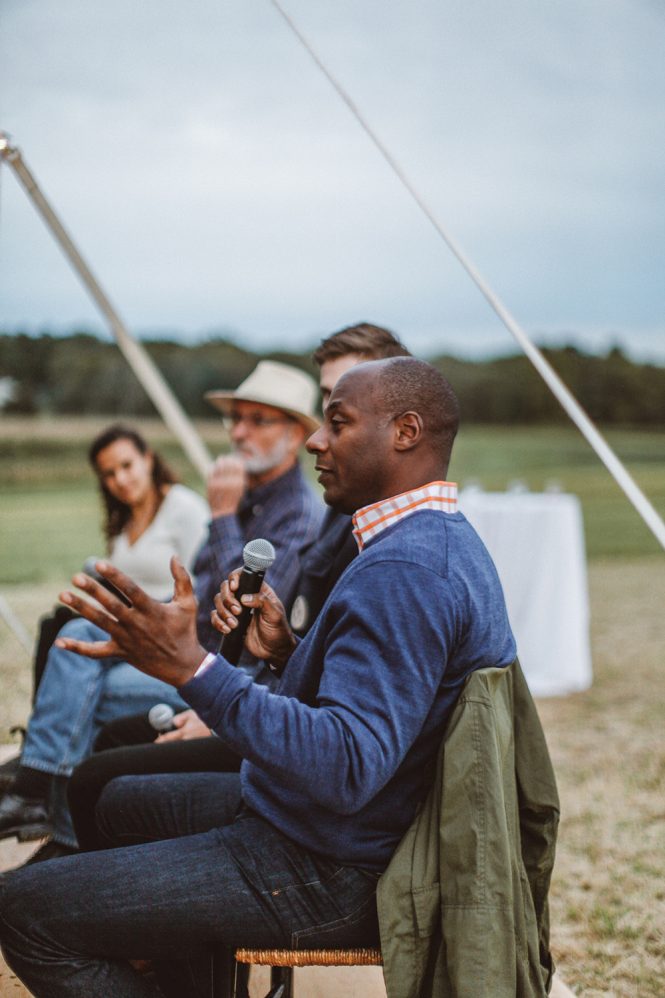 “While sustainable approaches to hemp cultivation are important, some farmers like Hudson Hemp are going a step further with regenerative agriculture,” explains John Gilstrap, Hudson Hemp’s chief operating officer. “It provides a holistic approach to producing biodiverse hemp cannabis that’s grown intentionally with the plant and the planet as major priorities.  Compassion for the plant is celebrated as farmers grow top-tier industrial hemp that holds unique characteristics specific to the living soil we use.”

Calling the family back home

At the time of the company’s founding, industrial hemp (a nonpsychoactive strain of Cannabis sativa) was also in the process of gaining legal status as a research crop, and Hudson Hemp was granted one of New York’s original licenses in 2017. That’s when Banks-Dobson picked up the phone and called home his two youngest sisters to help him. Melany and Freya Dobson also grew up tending lettuce, but had vowed to pursue other things.

“Ben called and basically said, ‘Come home, I need you guys here… Now I can’t imagine being anywhere else.”

Melany had studied German at Bard; Freya had graduated from Simon’s Rock and studied performing arts at the New School. When she got her brother’s call, Melany, now 26, was working in management in Humboldt County, California, in the state’s fledgling legal cannabis industry; she had convinced Freya to take a break from school and join her. But as the daughters of an agroecologist, neither of them was happy with the farming techniques being practiced there.

“Ben called and basically said, ‘Come home, I need you guys here,’” says Freya, now 21 and a person-of-all-work at Hudson Hemp. “Now I can’t imagine being anywhere else. Even the mundane tasks put a smile on my face because of the mission.”

Melany is chief administrative officer. “When we were kids, Freya and I were all about how soon we could get off the farm,” she says. “But once I stumbled back into agriculture, it all made sense. This is my life’s work.” 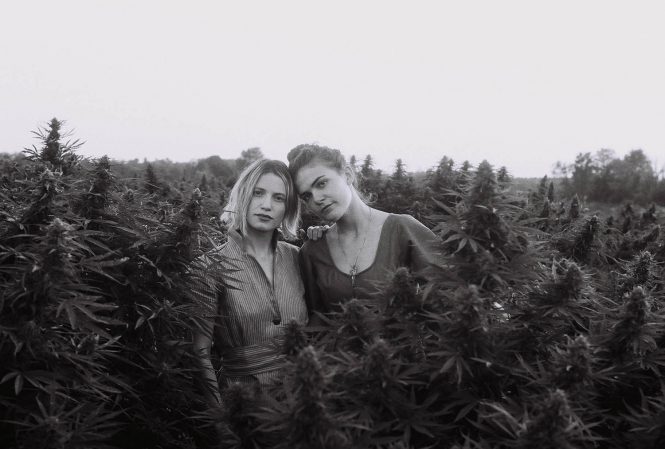 Hudson Hemp is now in its second year of processing and shipping full-spectrum hemp oil distillate and cannabidiol (CBD) isolate extracts for use in foods and wellness preparations. The company’s Treaty line of hemp extract products soft-launched in May and is expected to be in retail stores by June.

“We have four formulas targeted to specific concerns: focus, calming and sleep, pain and inflammation, and general balance,” says Freya. “They’re sublingual tinctures made with CBD and supporting botanicals.”

As for Old Mud Creek Farm’s soil remediation, although there isn’t any data available yet to correlate directly with the hemp crop’s impact, Matt Sheffer, Hudson Carbon’s managing director, says that, anecdotally speaking, things are going well. “We have observed tremendously large and deep root systems on our hemp plants, which are surely depositing lots of biomass throughout the soil profile, most likely making significant contributions to sub-soil layers (30 to 100 centimeters),” he says.

The 2019 growing season will be the first one in which part of Old Mud Creek’s hemp acreage “will land on a research site, at which we have about four years of baseline data, so we are poised to begin looking closely into the effects of hemp production on the carbon cycle.”

The future belongs to ‘thinker farmers’

Meanwhile, Ted Dobson, who is referred to by neighboring farmers as the “Godfather of Greens,” is transitioning into adding cannabis to his own operation, making the oldest organic market garden in Western Massachusetts the first legal outdoor medicinal cannabis grower.

“Dad started growing organic in 1983 when no one was doing it,” says Melany. “I think it’s pretty surreal for Dad that the three of us ended up doing this together, but I’m pretty sure he’s proud.”

Freya still steps back to marvel at the big picture. “Abby Rockefeller is intensely modest and visionary, not someone who wants her name plastered all over everything,” she says. “But she’s done so much to build the community. We have [Abby Rockefeller’s] Churchtown Dairy, our sister biodynamic farm, seven minutes away; a mile away is another organic farm with a bread baker and a CSA; the microbrewery down the road buys grain from us. There’s so much happening in food and ag science within a 10-mile radius, a big lab full people with a common vision. I think of them—Ben, our neighbors—as the ‘thinker farmers.’ And I think it’s our moment.”