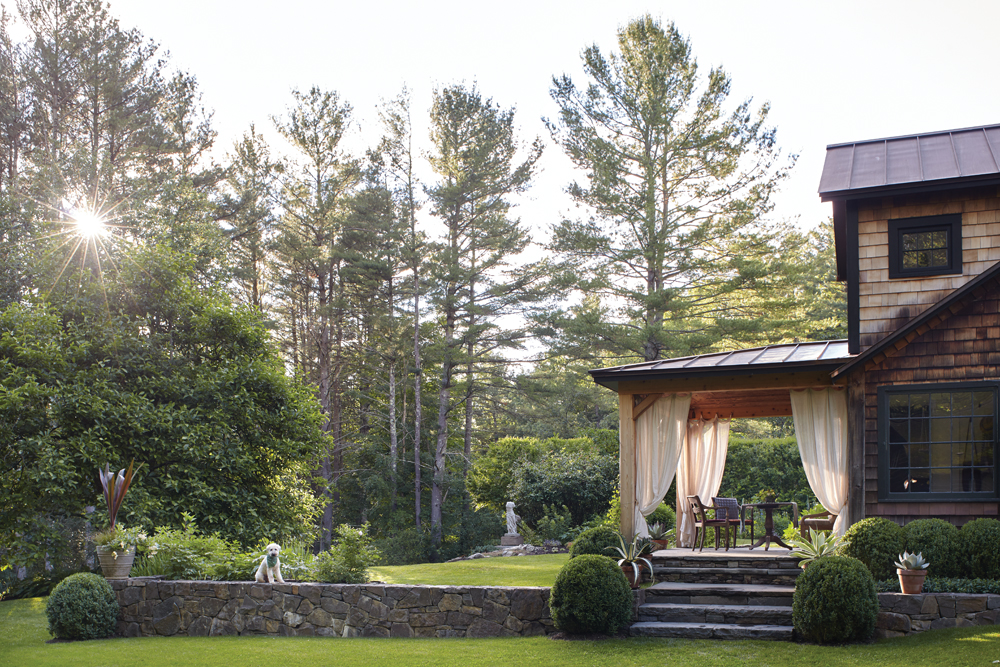 In 1987, designer Hadas Dembo stumbled onto her ultimate passion project. Cycling the hilly backroads of Columbia County, she and her husband chanced upon a decidedly rustic cottage. The cedar shake-sided saltbox was easily overlooked, aside from the For Sale sign in front. It didn’t exactly exude curb appeal. “Unruly shrubs and vines largely obscured the exterior of the house while the interior proved inviting to spiders, raccoons, and countless other creatures,” recalls Dembo.

Built in the 19th century, the structure was originally a horse stable (the original farmhouse had long since burned to the ground). In the 1920s, a trio of ladies recast the space into a women’s-only summer cottage, with no electricity or running water, but with the luxury of an added three-seater outhouse (which is still standing). In the 1950s, the cottage underwent a rudimentary modernization. “The home’s third owners added some plumbing, which consisted of small copper pipes that ran exposed along the walls to the kitchen, primitive electricity and a solitary, tiny bath on the first level,” explains Dembo. 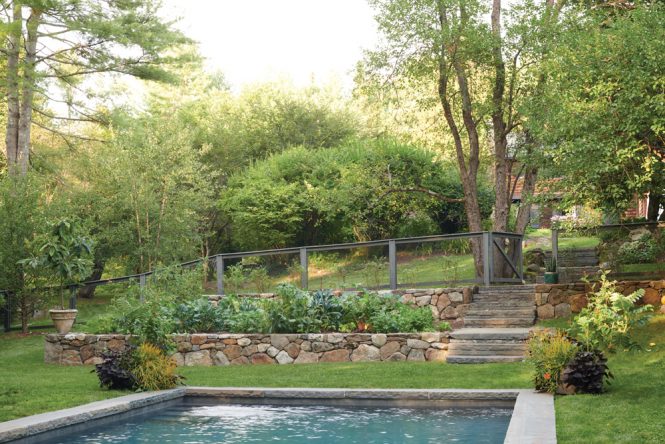 The pool and pool house were recent additions to the property, but homeowner and designer Hadas Dembo wanted it to look as if it had always been there. Terraced landings and stone walls were added to articulate the grounds as the pool sits below the house. Antique copper pots with exotic plantings anchor the foot of the pool.

Based in Manhattan, Dembo and her husband had already fallen for the hilly countryside east of the Hudson. “My in-laws owned a house in Ancramdale and my husband had been spending weekends there since he was five,” she says. As a couple, they’d visited regularly and had already contemplated getting their own place. The gussied-up-but-overgrown horse stable was actually the first house they’d considered buying. “Then we thought, well we better go check out other places,” Dembo remembers. “But there was something about the house that spoke to me. We were instantly smitten by the unspoiled state of affairs.”

It’s a classic story: Girl meets house. Girl falls for house. Girl completely underestimates the renovation task at hand. Girl then spends the next 30 years transforming it into a comfortable, eclectic space with modern amenities that nevertheless retains the simple honesty of the original structure.

In many ways, the evolution of the 1,700-square-foot home and surrounding five-acre property mirrors the trajectory of Dembo’s career. Originally an English major with a passion for film, Dembo first worked in magazine publishing. “As a director of photography, it was my job to come up with creative ways to illustrate stories,” says Dembo. “And the stories I worked on weren’t always so easily illustrated. I did travel, fashion, culture, arts, and even business articles.” 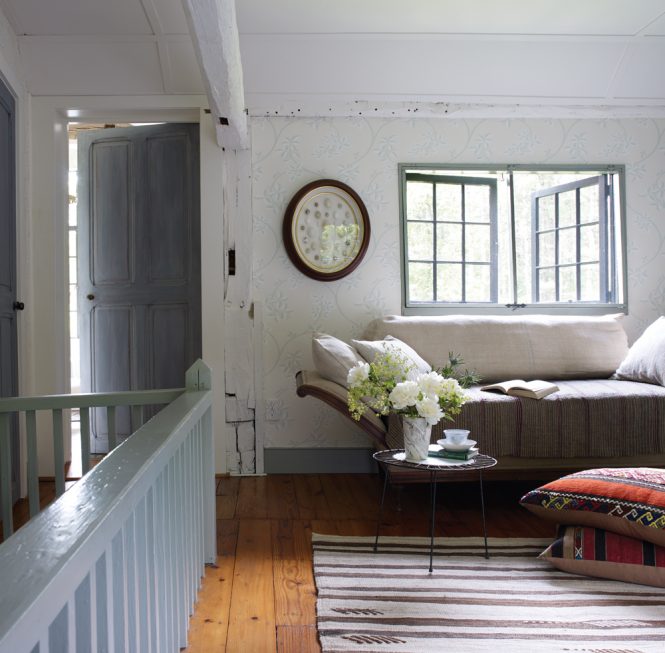 On the second floor, a sitting area furnished with a vintage French daybed, antique Persian rug, and vintage Turkish floor pillows serves as the family den.

The experience developed her skill set for creatively telling visual stories. It also gave her a deep appreciation for weaving and layering myriad details to create rich mise en scenes. “I like for things to look as though they just happened, which of course they never do, but that’s the trick,” she explains. “It’s a lot like cooking—you can have a lot of ingredients you like, but they have to actually work together in the end.” (Mise en Scene is also the name of Dembo’s interior design firm.) Meanwhile, Dembo began decorating homes on the side, mostly focused on renovating Manhattan apartments.

Shortly after buying their upstate weekend getaway, Dembo and her husband started a family. “When our two kids were little, we couldn’t do too much to the house,” she says. “We cleaned it up a bit—I mean, it was a mess—but we couldn’t do anything major.” What they did do was spend weekends exploring the area’s treasure trove of art, antiques, and second-hand finds. “We went everywhere,” says Dembo. “We went to tag sales, we went to flea markets, we went to all the big antique shows, and we visited the Brimfield show in Massachusetts three times a year.” 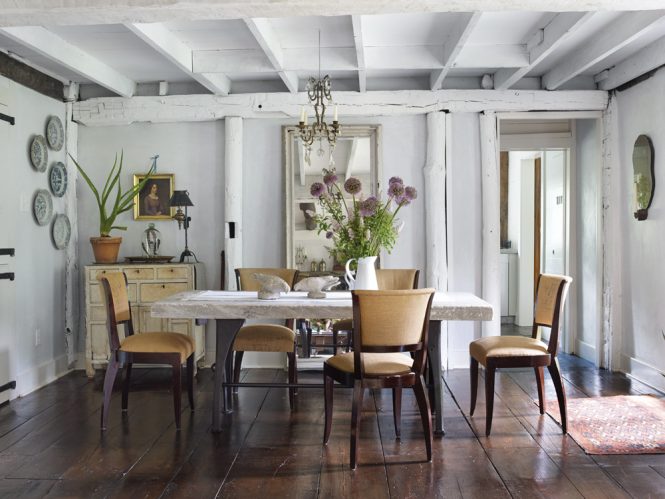 She also developed relationships with local artisans, which she began utilizing for her growing design business in Manhattan. Eventually Dembo left the publishing world behind to focus on interior design, relying on her ever-expanding mental Rolodex of upstate vendors. “This area has such great resources,” she says. “I use a lot of people up here, including local upholsterers, metal workers, and carpenters, and get window treatments made locally as well.”

The Kismet of Great Design

As Dembo and her young family got to know their own house, they slowly made improvements geared toward more comfortable living. “At first we were do-it-yourselfers, as we had some basic skills,” Dembo says. However, as they did more extensive renovations, they called in outside help. They began by insulating the walls. “Beneath the cedar shake were just barn boards,” she recalls of the original structure. They also rewired the electrical system, embedding it in the walls, and upgraded the ancient plumbing.

When it came time to rework some of the interior design, Dembo was able to put both her creative skills and her connections to work. “The creative opportunities afforded by an old house with intrinsic charm and history were both alluring and challenging,” she explains. “Since the stable-turned-house was an ever-evolving place, I didn’t feel the need to recreate a period piece—instead I filled the home with my scavenger finds.” After years of scouring upstate tag sales and antique fairs, Dembo has “a huge mental database of where things are,” she explains. Still, she never gets attached to any one idea when she begins a project. “I usually have a good starting point of what I want,” she explains. “However I don’t get buttonholed into an idea. I’ll go out looking for something—let’s say a dresser made of a specific material, for example—but then I find something totally different that’s even more interesting than my original idea. It’s part of the evolution of a project to keep an open mind.” 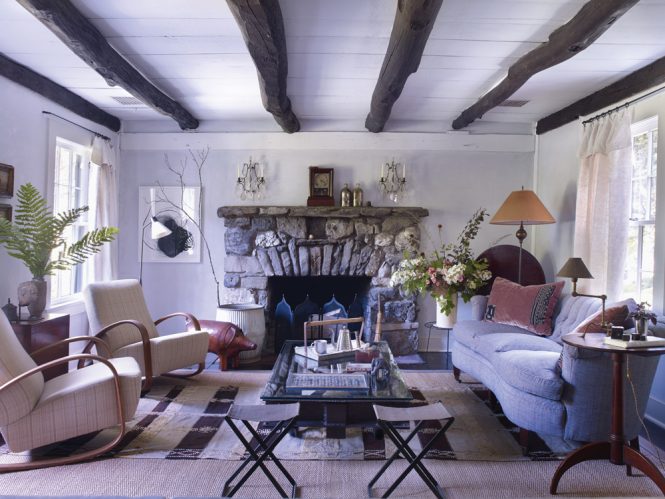 Dembo believes the downstairs barebones kitchen and mudroom had originally been an outdoor area enclosed by previous owners. To reinvent the space, Dembo sourced reclaimed 18th-century Belgian bluestone tiles originally used as ship ballasts to cover the kitchen and mudroom floors. “Each is about a hundred pounds and were used in the hulls of trade ships traveling back and forth from Indonesia,” says Dembo. “Some still have shells embedded in the surface.”

To keep from getting “too cute” with the antiquated floors, Dembo included a suite of stainless steel appliances and paired them with contemporary counters and light fixtures.

The home’s latest remodel project is the capstone—both literally and figuratively—of the cottage design. Enlisting the help of local architect Kate Johns, who specializes in seamless additions and restorations of historic properties, Dembo reimagined both the interior bathroom situation as well as multiple outdoor spaces. After years of living with the original downstairs bathroom, Dembo decided it was high time for an upgrade. “The bathroom opened right into the kitchen, which I hated,” she explains. “Especially living with kids, the door was always open.” Dembo and Johns flipped the bathroom entrance so that the room is now entered through the mudroom. The bathroom’s original door sill was repurposed as a shallow pantry. They also removed the room’s bathtub to create a spacious powder room. A new expanded window adds light and air to the space and wooden floors reclaimed from a bowling alley, laid in a herringbone pattern, add an elegant update. 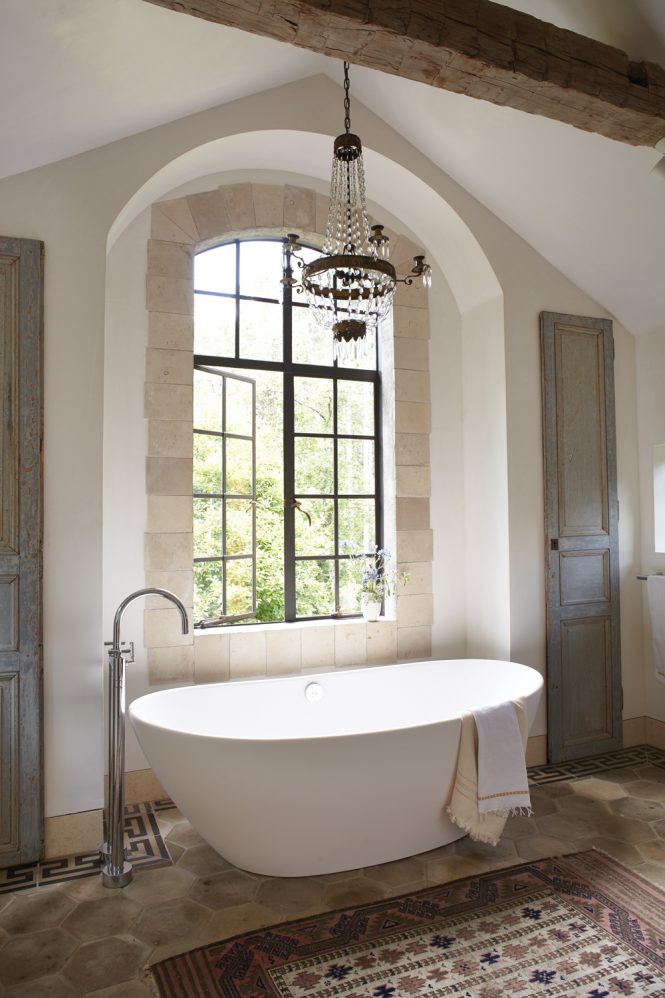 Upstairs, the pair pushed out the sloped saltbox roof to create an ample, light-filled primary bathroom. Here, Dembo’s signature style of synthesizing contemporary features with antique finds is finely displayed. The room features a modern sink with a stone backsplash and ample glass shower, but the floors are finished with vintage French encaustic tiles. A freestanding MTI tub with a Tara faucet from Dornbracht looks out to the gardens through refurbished vintage windows, found locally. With John’s help, Dembo also designed a covered porch at the rear of the home utilizing reclaimed mushroom boards for the ceiling.

While Dembo admits that she’ll always find something new to “fiddle with” on the property, she thinks her passion project might have reached an interesting stopping point. “After more than two decades—it seems impossible now to fathom how one can possibly spend so much time on so small a space—our dream has finally come to fruition.”