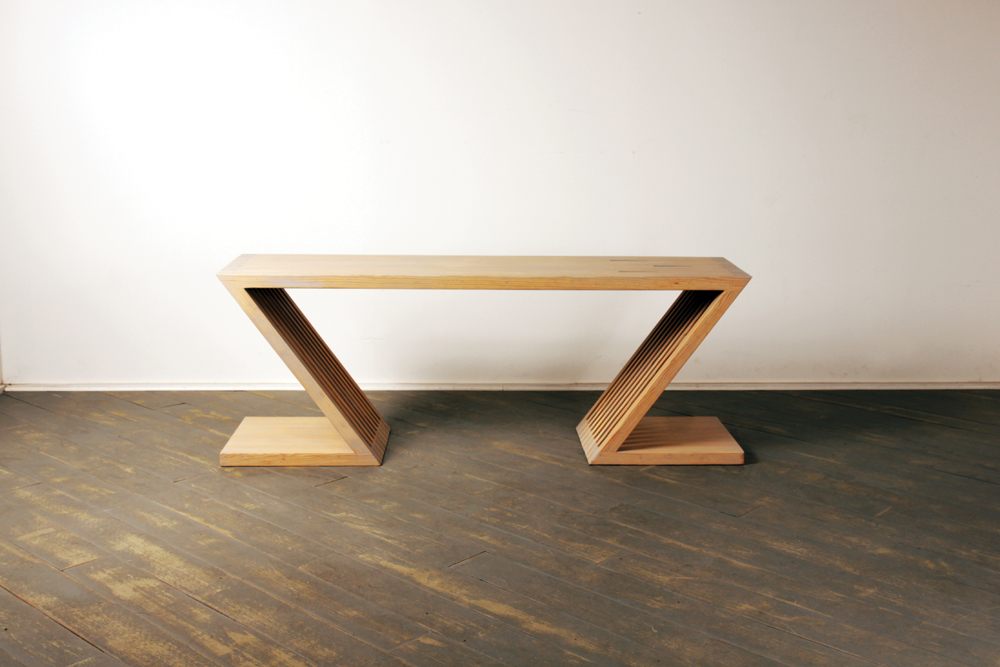 Jim Malone didn’t set out to be a furniture maker. Originally from the Jersey Shore, Malone moved to the Lower East Side in 1995 to make music. “I was working for a small music production company but business was a little slow, so we got into dubbing English language versions of anime,” he says, describing his early career. His company was contracted to dub Pokémon’s American incarnation, and Malone worked as a cartoon producer and voice director for several years. In 2007, however, “the company I was working for—the bottom sort of dropped out, and I was laid off.”

It was around this time that Malone turned to woodworking, a craft he had begun to hone while building a log cabin in Catskill in the early 2000s. “I needed to get some green in my life, which I think a lot more people are relating to these days,” Malone says, describing the process of constructing a retreat in the Hudson Valley. That’s where I really cut my teeth in woodwork- ing, and also learned about what at the time was [becoming more popular], which is the use of reclaimed wood.”

The inherent sustainability of repurposing wood—and utilizing non-toxic, zero-VOC oil finishes—is integral to the work Malone and his team do at Kingston-based CounterEv Home. And they don’t just use any reclaimed wood: CounterEv’s products are largely made from reclaimed heart pine sourced from decommissioned bowling alleys. “I really fell in love with the wood,” says Malone, relating how heart pine was “used in almost all bowling lanes that were built before 1980 or the late `70s—various Southern old growth pine, stuff that’s not even around anymore.” 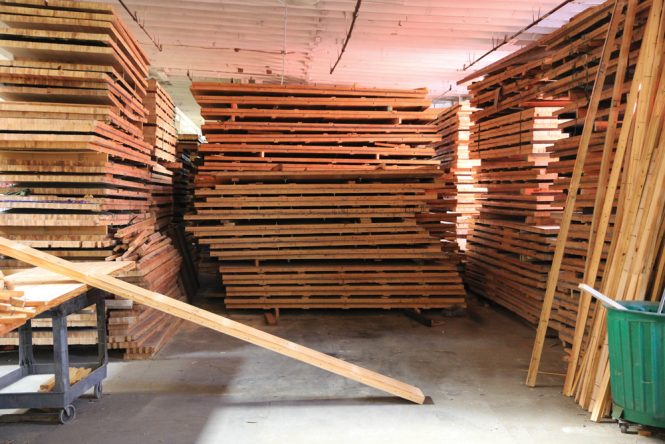 The minimalist beauty and long grain of the re- purposed wood is at the center of the company’s approach. “The wood itself has suggested many of our designs,” Malone adds, which include two main furniture lines: Modern Rustic (all wood) and Splashups (wood and steel). Prices start at $295 for most small tables and stools, and continue upward for dining and kitchen tables, desks, easy chairs, benches, and a number of other products. Smaller items—cheeseboards, coasters, and other accessories—start around $30. All CounterEv Home items are viewable online.

“We take the lanes completely apart, clean everything up, and then we put it back together with the designs that we’ve created.” Malone says, describing the process of building from decommissioned lanes. He lists modernist and Japanese architecture as influences, noting his “goal as a designer is always [to pursue] minimal- ism by utilizing the strength of the materials— wood and steel—for support, rather than adding more structural elements.” A master woodwork- er and steelworker—whom Malone describes as the “cornerstones of the company,” and have been with him for over 10 years—assist him in this work, along with a rotating crew of laborers that they train.

Malone emphasizes his previous career in the music industry as another source of inspiration: “I’m a firm believer that if you spend enough time pursuing some art, whatever medium or discipline it is, it’s going to inform whatever else you try to do. I feel like my experience as a musician [gave me] a perspective in design that was a little more informed than it would have been if I just decided all of the sudden I wanted to be a furniture designer.” 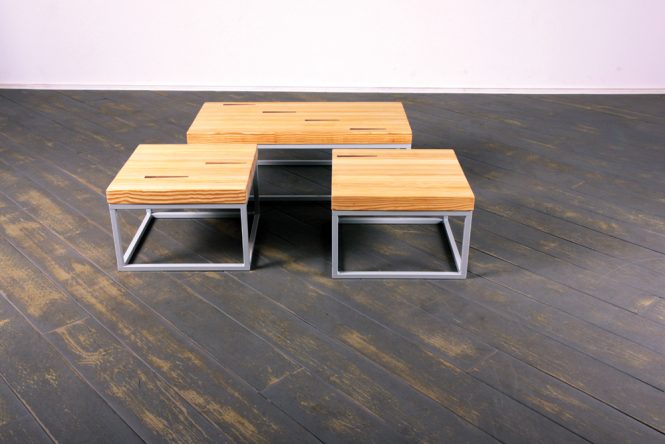 The Squaresville 3-piece coffee table with arrow inlays in raw stain with a pebble gray powder-coated base.

CounterEv has worked heavily in the commercial field—originally producing counters (hence the company name)—and has created tables for companies like Shake Shack, Starbucks, Sweet- green, and others. The pandemic spurred a shift toward residential work—a change that Malone has eagerly embraced with CounterEv Home.

“The thing that I enjoy the most is making furniture for people’s homes,” he says. “It’s just much more interesting work. We’ve done some amazing commercial work, and we’ve had great commercial clients. But there’s really nothing more satisfying than when we hear from a customer from five or eight years ago who says, you know, their CounterEv table is their prized possession.”

“From a design perspective,” he continues, “I find the things that people want in their homes are a little more interesting and adventurous.”

Along with their standard lines of furniture—all handmade—CounterEv Home offers and en- courages customized orders from homeowners: countertops, shelving units, beds, banquettes, benches, and more. “We’re trying to encourage people to come to us with built-in or design ideas. Anybody with an idea—get in touch, ‘cause we’re open.”

Asked if he’s concerned about running out of bowling alley wood, Malone says no—for now, noting a network of countrywide contacts who alert him to newly available lanes. “That used to be the first question that people asked,” he says, laughing. “If it does happen, I feel like the designs will transfer to other wood species. For now, we’ve got a good supply, [and we’re] happy to continue using it.”

Malone particularly looks forward to connecting with more homeowners in the Hudson Valley: “For a long time we’ve been sort of a Brooklyn company that’s been manufacturing in Kingston, and I feel like now we’re a Kingston company. I feel much more rooted in the area.”

“Especially after the last year, I’ve spent a lot more time in Catskill at our cabin, and my family has as well,” he explains. “I’m definitely looking to continue that and hopefully make a lot more furniture for the people in the area.”