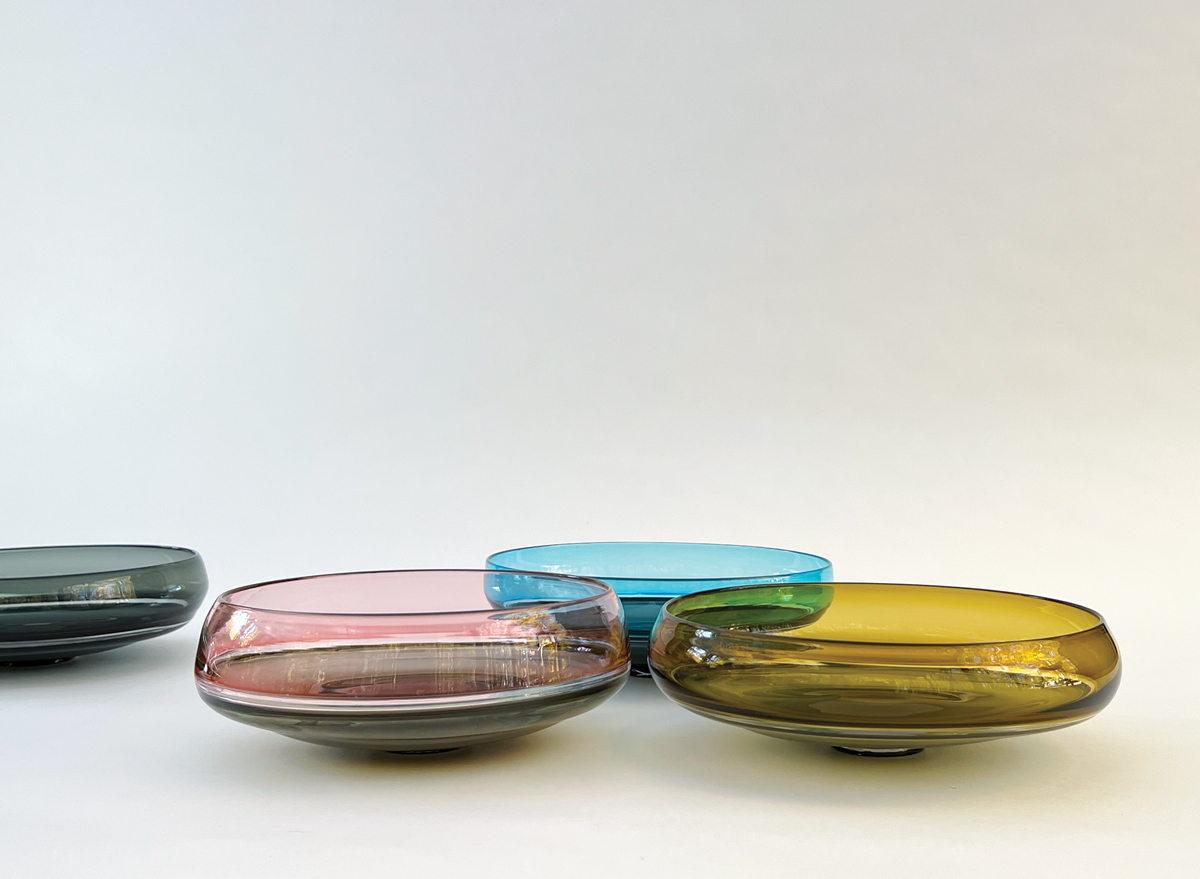 Several times a week, Catskill Glassworks founder Chad Davis enters the Woodstock Art Exchange in West Hurley and spends an hour or two blowing glass. Sometimes it’s a bowl and sometimes it’s a beer glass. On other days, he spends time tinkering with raw materials, creating whatever strikes his fancy.

When Davis took his first glassblowing course in college, he knew he had found his metier. Although he wasn’t quite sure that he could make a viable career out of blowing glass, he’s certain now that, almost 30 years later, he’s made his mark. “I remember the first piece I made in college—a cup that was dumpy and clunky, but it showed me that I could make something out of this material and that’s difficult to do,” says the 46-year-old East Durham resident. “It’s a challenging craft to learn that requires a lot of focus.” 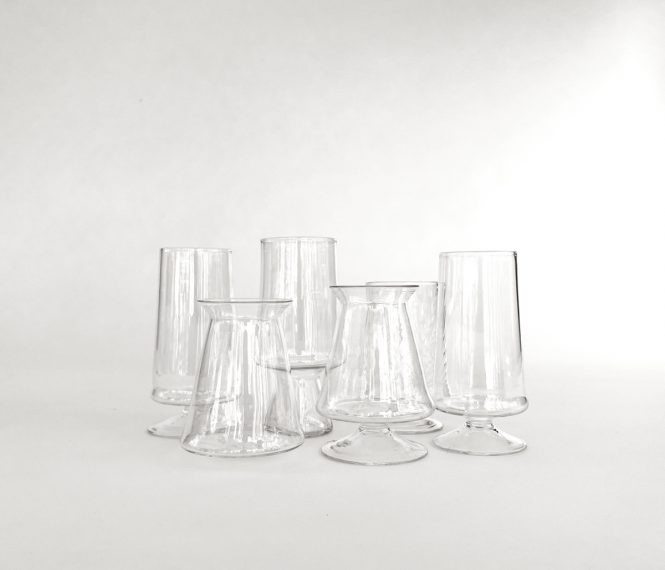 He actually stumbled upon glassblowing in 1995 when he attended the New York State College of Ceramics at Alfred University in western New York. “I did ceramics at Roosevelt High School in Hyde Park and had a great high school teacher who taught me pottery and even went as far as picking the university I would attend because she knew I belonged,” says Davis who also met his future wife, ceramic artist Lucie Piedra at Alfred. “They had a glass program and I wanted to try it.”

That’s all it took. Blowing one piece of glass art and Davis was hooked. After graduation, he moved to Napa, California where he worked for Skeels Glass for a year before moving back to the Hudson Valley. He then worked for Arnold Larson’s glass studio in Poughquag for seven years and spent the next eight years working for renowned glass sculptor Barry Entner in Rhinebeck. 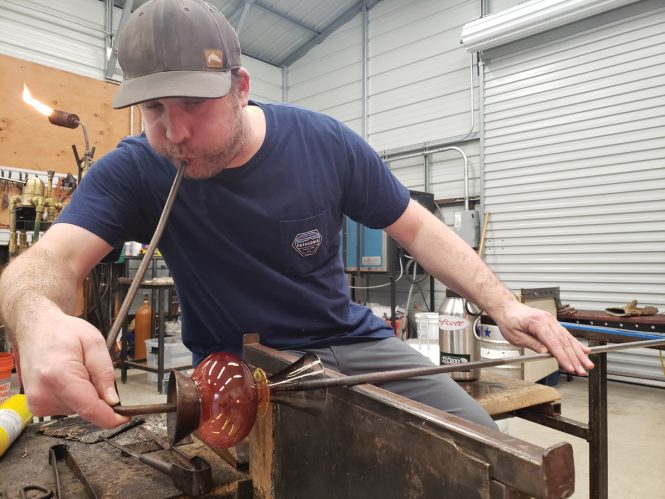 Chad Davis using a soffietta to inflate the cup on a piece of stemware. 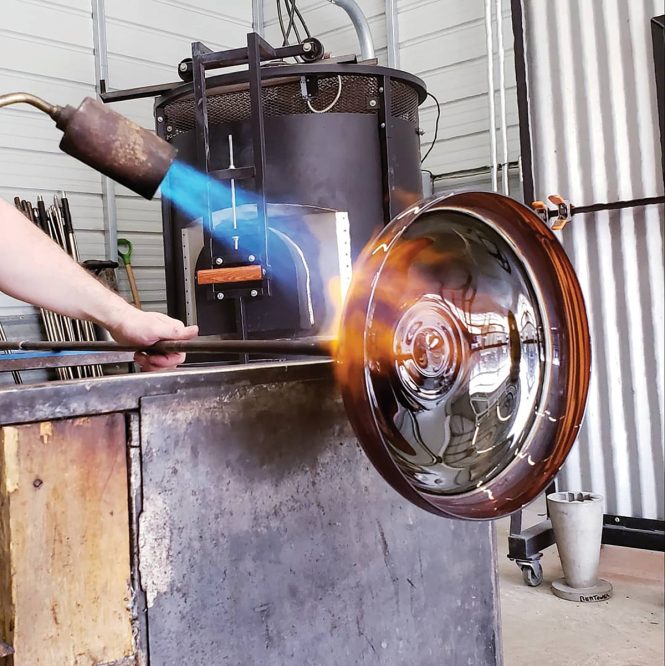 Davis finishing an incalmo bowl with the torch, preparing it for the annealing oven.

But the desire to start his own business and craft his own creations was calling. All that was missing from getting his company off the ground was a glassblowing studio. “Finding space is the hardest task for most glassmakers,” says Davis. “The equipment’s very expensive and the overhead for keeping it hot is very expensive.”

He met Paul Weinschenk, owner of Pablo Glass studio, who created the Woodstock Art Exchange, a glass and gift gallery in West Hurley. “Without this place and community, I’d probably be working construction or something,” says Davis.

In 2016, Davis launched Catskill Glassworks and he now spends time creating his own designs. With limited studio time—he shares the studio with other glass artists—Davis must plan out what he’s going to work on each day and that may vary depending on his mood. “Every action is very deliberate. I don’t just pick up a pipe and start making things. I always have a plan and sometimes that plan is to just play around with a certain shape or design,” he says. 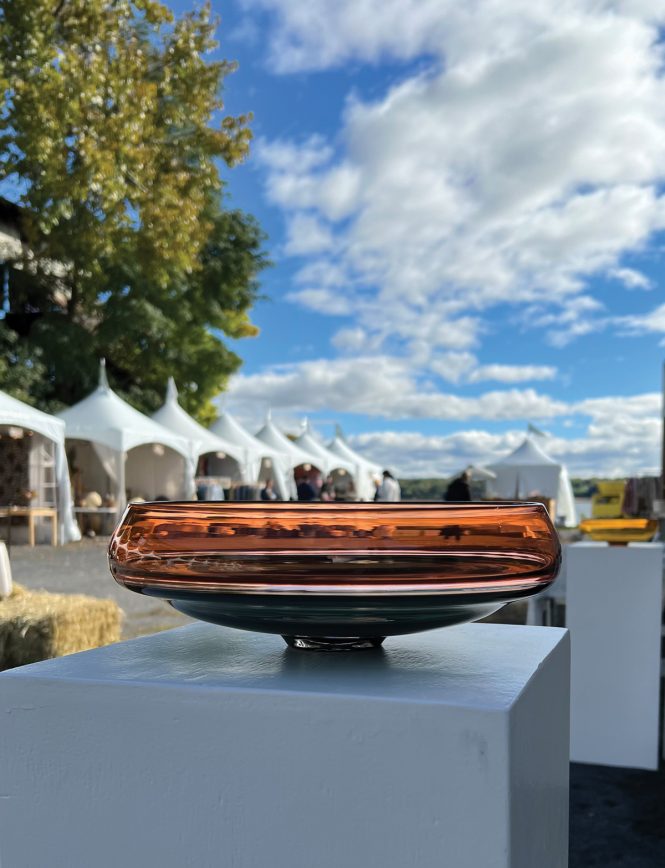 Davis also chooses to make things that reflect a reflection of his life, which led to his own design of Teku and IPA beer glasses. “I started drinking really nice craft beers,” he explains. “There is a culture, especially on Instagram, of people who rate beers and post photos. I appreciate the local breweries and was looking for something to enhance the experience, so I made a beer glass. There are people who enjoy drinking their fancy beers out of fancy glasses so they found me and started buying my glasses. That felt good, so I kept doing it.”

When he’s not in the studio, he’s at his home workshop, polishing the piece as well as doing the administrative tasks of owning a business, including marketing and shipping. He’s also doodling new ideas. “I see other glassblowers who don’t have the luxury of making what they want to make because they’re stuck making the same thing to fill orders,” he says. “This gets in the way of the creative process for me, so I feel pretty fortunate to be able to work this way. It hasn’t been easy to get to this point.” 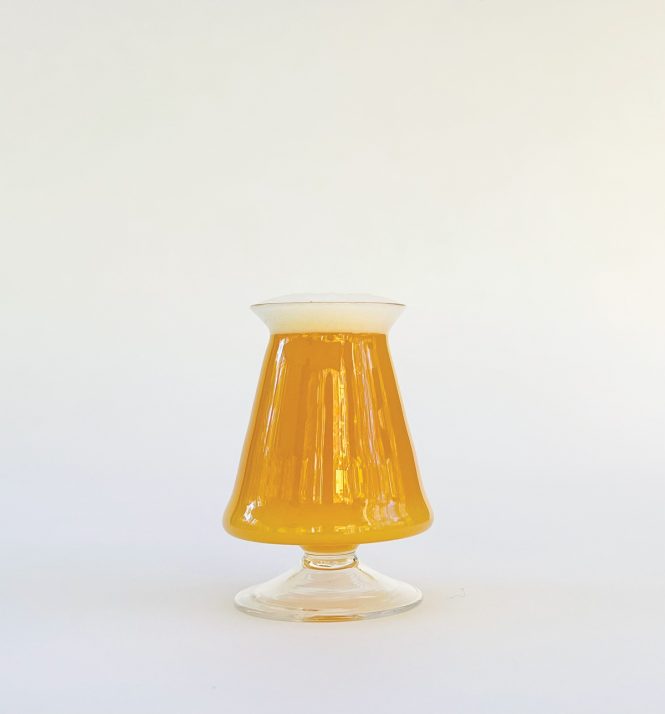 Although glass has had such a positive impact on today’s advances in many areas, including communications, Davis said he still struggles with the guilt of glassblowing on the environment. “Today, televisions, cell phones, and fiber optics are made with glass and many people don’t realize the significance of that, but it’s such a massive energy-consuming process,” he says. “Yes, the equipment is way more efficient than it ever was. We have electric furnaces now. And we can use solar power so the footprint isn’t as bad. But glass also doesn’t degrade over time. I have to remind myself that glass has historical significance and all of those things would go on perfectly fine without me making beer glasses, but still.”

Davis is eager to build his own studio on his residential property so he can work on his craft at home. He’s also interested in getting back into ceramics. “It would be nice having a potter’s wheel again because I miss the ceramics I did when I was in college,” he says. “Ceramics is a very different process—it’s very casual and relaxing and blowing glass is not.” 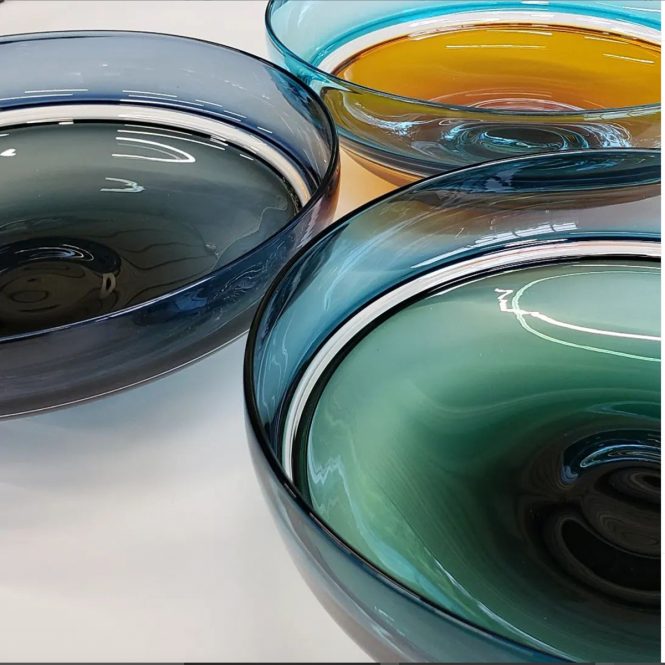 A finished group of incalmo bowls.

Davis says he gets “in the zone” when he’s blowing glass. After all, he’s dealing with fragile material and extremely hot temperatures. One false move and his work can be destroyed. “You have to move with the glass; there’s a rhythm to it, so I listen to music when I’m working,” he says. “When I’m at the end of the piece, I am so focused and my heart rate increases and there’s an anxiety and thrill of finishing it, but it’s a weird relationship because of what can go wrong.”

Although glass is fragile in its early stages, Davis wants consumers to know that glass is actually a very durable material. “If taken care of properly, it can last forever,” he explains. “Handmade glass can enhance the experience of any beverage. The shape of a glass can help to funnel the aroma, allowing you to taste more; but more importantly, having something special, something handmade makes life a little more enjoyable.

Davis’ brother still has that first dumpy and clunky glass he ever made. “I love knowing it,” he says.