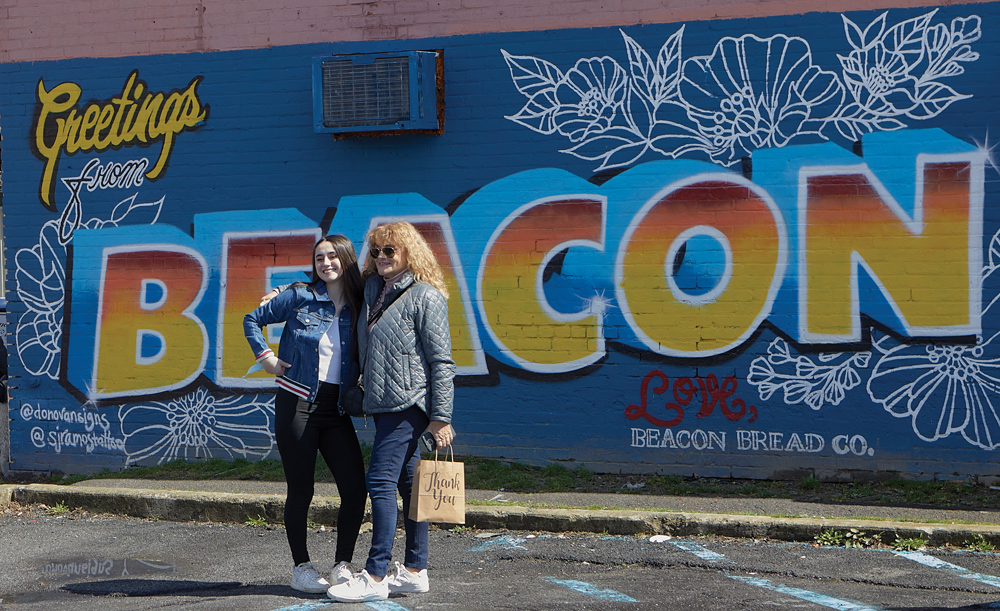 Proximity to Major City: New York City is 60 miles to the south.

Transportation: Beacon has its own Metro-North Station. It’s a little over an hour to get to Grand Central Station by train. I-84 runs across the north end of Beacon, Route 9D runs through the city’s west end, and Route 9 is about a mile to the east. Stewart International Airport is 14 miles west in New Windsor. A commuter ferry makes regular runs to Newburgh.

The area that became Beacon was first appropriated by European colonists in the early 1680s, when two fur traders purchased it from the Wappinger tribe for about $1,250 in merch. It was, and remains, an exceptionally advantaged spot, backed up to the highest mountain in the Hudson Highlands and a four-season creek running through it to a commodious bay.

One of the patentees left his share to his daughter Catheryna, who married a British naval officer named Roger Brett and built a homestead (now a museum) before he drowned in the river. Widowed at 31, Catheryna carried on, organizing the area’s first produce cooperative, building a road along the Fishkill Creek, and helping to organize a storehouse on the shore. 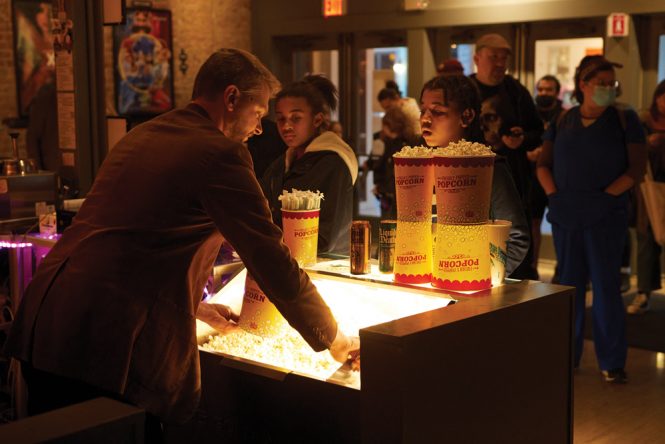 During the revolution, the summit of Beacon’s mountain achieved iconic status for signal fires visible from West Point. In 1902, a funicular railway was installed with a 74 percent grade, the steepest of its kind and not for the faint of heart.

Beacon faced a familiar litany of challenges in the mid-20th century, with urban renewal devastating its downtown while deindustrialization sucked the surrounding economy dry. The 1970s saw the closure of both the incline railway and a short-lived ski area. 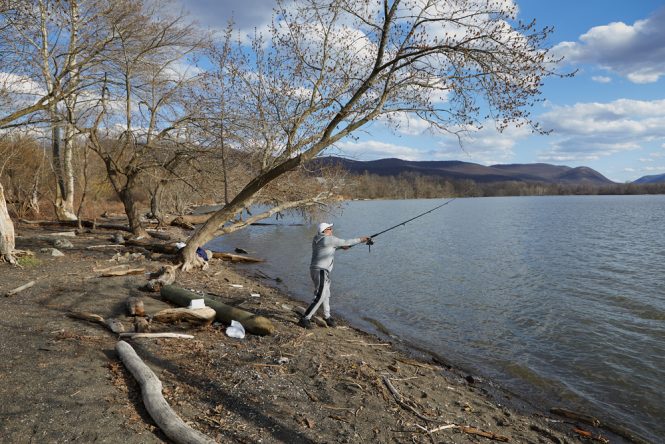 Casting a line at Long Dock Park in Beacon.

But more change was already waiting in the wings. A local named Pete Seeger founded the Beacon Sloop Club. Beacon’s downtown began to flourish in the 2000s, when the Dia Art Foundation’s opened its 160,000-square-foot museum in a former Nabisco box factory, kicking off a trend of adaptive reuse and reinforcing the city’s growing reputation as an artist’s haven.

Besides the irreducible assets that were familiar to Madame Brett, the town had gained a Metro-North stop, an interstate highway interchange, a castle on an island just offshore, and, much more over the intervening decades. Nowadays, you can tour Pollepel Island, hike to the of summit Mount Beacon, and brunch in a historic textile mill overlooking the creek—or down on the shore at Pete and Toshi Seeger Riverfront Park.

Christina Montaldo, a horse trainer and single mom, watched Beacon transform while growing up in nearby Wappingers Falls. Five years ago, she picked up and moved there. “I’ve been coming to Beacon my whole life, and I remember when it was a total mess,” Montaldo says. “It’s turned into something remarkable—very welcoming and a great place to live, and every single year it’s better and better.” 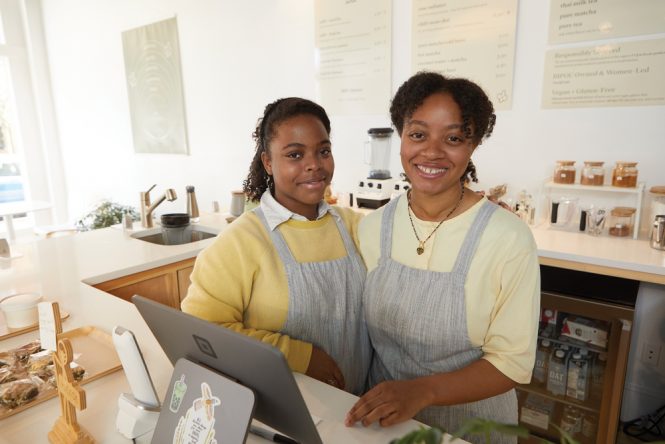 Nia and Haile Thomas of Matcha Thomas, a wellness teahouse on Main Street serving vegan and gluten-free drinks and sweets.

With its densely packed mile of Main Street commerce and a riverfront remodeled by Scenic Hudson, Beacon does seem to have come into its own as a spot where dreams of all kinds can bear fruit. “Beacon is very community oriented, but it’s also very future oriented,” says Aimee deSimone of Berte, the handmade design shop she opened in October of 2020. Before opening the store, deSimone worked in television production, which involved a lot of traveling around the country and shooting B-roll of various main streets. It carries particular weight when she says that Beacon’s mile-long Main Street sticks out. “I’ve never seen anything like it,” she says. There’s a cat cafe (Bean’s); the sustainable bulk retailer Refill Restore has just opened up, a long overdue place where Beaconites can buy cleaning products and other home goods in bulk without the packaging; and a handful of provisions shops have also hung out their shingles recently. There’s also the Hudson Valley Food Hall, where restaurant concepts are incubated in a communal environment and cocktails designed around Hudson Valley spirits are served.

Montaldo loves Beacon for its “diversity of atmospheres, she says. “You can grab a bite and some coffee and then walk down to the river for nature and quiet time. Whether you’re in a beer-and-pool table or a coffee-and-art gallery mood, it’s all close by. There are all different kinds of shops—soaps, clothing, art, music, books, toys, instruments—and right down the street there’s a music and theater venue with shows three nights a week. It’s just very nice, living a block and a half from Main Street when there’s always something exciting, cool, and new going on—and being able to walk to hiking and waterfalls.” 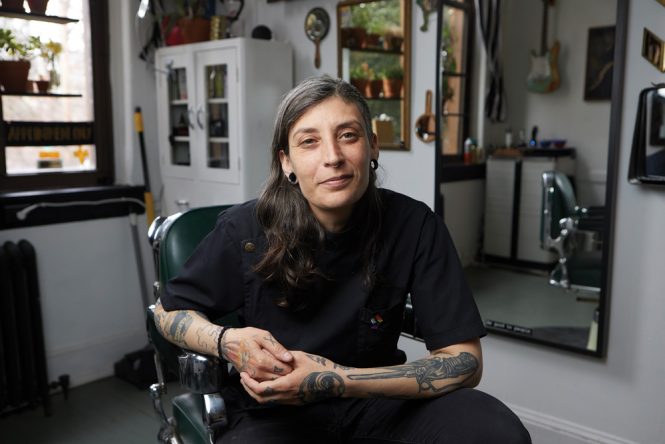 Lucky Longo in their hair-cutting studio at the former Beacon High School.

Growing up nearby in Garrison, Charlotte Guernsey saw Beacon’s next wave coming and began renovating her own Main Street building in the late ’90s, then opened her real estate office in 2001. A designer by training, Guernsey has been instrumental in several of the city’s major renovations. “We have been turning the whole city around, and it’s beautiful being part of it,” she says. “Market conditions here are still pretty wild; there’s still very low inventory, and it’s still driving prices to be pretty high. People still want to be here. It’s a little less frenzied than a year ago, but until inventory builds back up, that’s where we are.”

That said, Guernsey believes several factors point to further cooling. “The new [higher] interest rates mean that buyers can no longer afford certain price ranges, which lessens demand. Then too, some of the people who moved up from the city now have to go back, and there are some for whom it just wasn’t what they thought it would be,” she says. “We have a reciprocal relationship where we feel the market downstate—when prices are strong down there, people have the money to buy up here, so we get a wave.”

Guernsey says a touch of cooling is a healthy thing at this point. “We had a perfect storm of a housing shortage, people moving up and not having to commute for a long time. At this point it’s gone up so much so fast that it needs to level off, and people know that. It’s nicer when there are opportunities for people to get a deal, and with everything super-high, that opportunity’s not there.”

A renovated four-bedroom Victorian that pairs a rocking-chair porch and original bay window with a modern dream kitchen had just come on the market for $825,000; a four-bedroom, two-and-a-half-bath Colonial built in 2016 was listed for $985,000.