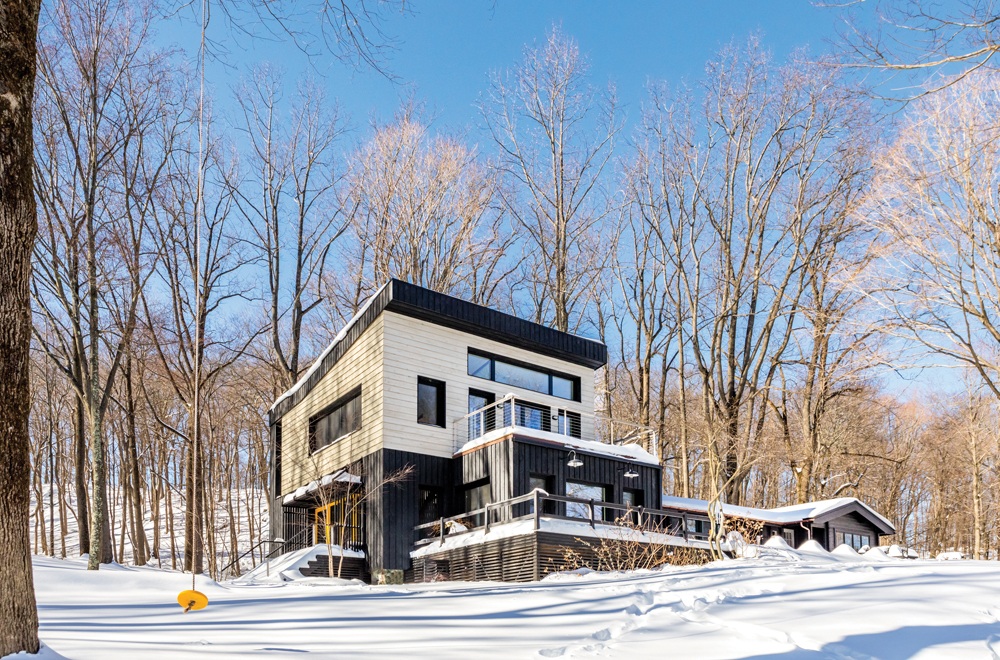 When interior designer Evelyn Carr-White and her husband decided to relocate to the Hudson Valley, they had one simple requirement. “Like many Brooklyn transplants, we moved north when our family expanded past what could comfortably fit inside our Dumbo apartment,” says Carr- White. “But we knew almost nothing about the area.” Her husband, playwright and television writer Sharr White, did know one thing: He wanted a train commute of at least 45 minutes. “That way, he could get a chunk of writing done,” she explains. “And no switching trains, either—he wanted to claim his seat each day, and then just go.”

An element of the theatrical enlivens Carr-White’s work as well as her husband’s. Before founding her interior design business, Domicilist, she studied acting at Carnegie Mellon and then design at Parsons, and has also designed jewelry, been both painter and ceramicist, and even sung in a local band. However, her love of interiors has allowed her to fuse many of her eclectic talents into one creative discipline. “I love the inherent challenges presented by different spaces,” she explains. “I like spaces that elevate possibility, so there’s always an element of glam in there.” Whatever home they found, Carr-White was bound to transform it into something dramatic. 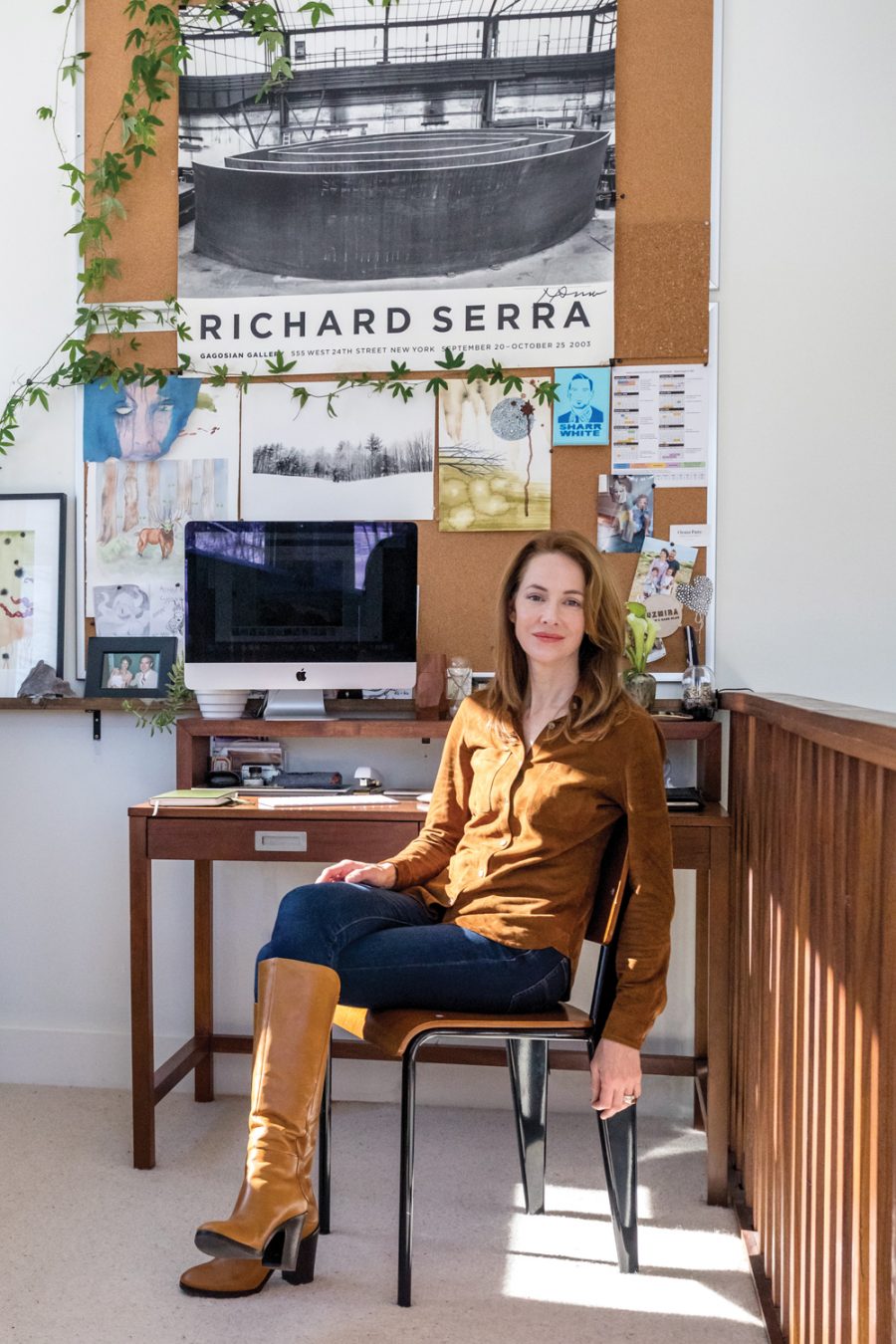 Evelyn Carr-White in her second-floor office space. Carr-White studied theater, paints, designs jewelry, throws pottery, and sings, as well as designing residential spaces. Her own home’s design “has been a la bor of love (and occasional frustration) for almost five years,” she explains. “Because I’m an interior designer by training, I am constantly changing everything around.”

With their two young boys, they began looking for houses along the Metro-North line and soon stumbled across Cold Spring. They were instantly smitten. “The schools are great, the town is totally charming, and there’s a ridiculous amount of outdoor activities at your immediate disposal,” she explains. “It seemed like the perfect place to raise our kids.” So, in 2007, the family relocated to Cold Spring and bought a Victorian fixer-upper in the village. Eight years later, the Victorian was fully rehabbed and Carr-White was ready for a new challenge. The couple had also begun to question their deeper motivations for moving upstate. “We wondered, ‘Why did we even move from the city?’” she remembers. “Living in the village, we were having the same sort of experience as in Brooklyn—of just, you know, living indoors.” They realized they wanted a home, and a lifestyle, where their boys—and they, too—could live more closely with the natural world. So they set out looking for a new home.

When they found their five-acre property—encompassing a large pond and wetlands—they embraced it as the next step in their upstate evolution. “Primarily, we thought it would be amazing for our kids,” she says. “We wanted them to have that kind of natural experience; to have the pond and the woods being a part of their childhood was important to us.” And the property was just outside of Cold Spring—ensuring that White could continue his productive commute.

On a hillside facing east over the pond, the land included a modest, 1980s log cabin used by the previous owners as a weekend retreat. The two-bedroom cabin had a rudimentary kitchen and two small bathrooms, and was centered around a main living area with vaulted cedar ceilings, rough cedar walls, and the original fireplace. “It was darling and smelled amazing,” says Carr-White. It was much smaller quarters than they were used to, but, even so, they bought the property in 2015 and moved in. “It was very, very cozy,” says Carr-White, but after a few months it became evident that the family of four was “going to need a bigger boat.”

They needed to expand, but the property they’d fallen for came with its own particular challenge. The cabin’s proximity to the protected pond, and an adjacent vernal bog—which was already home to an established ecosystem and a community of woodland frogs—necessarily limited its size as well as the location and load of both the septic and well. “We needed to stay as close to the original footprint as possible,” explains Carr-White. 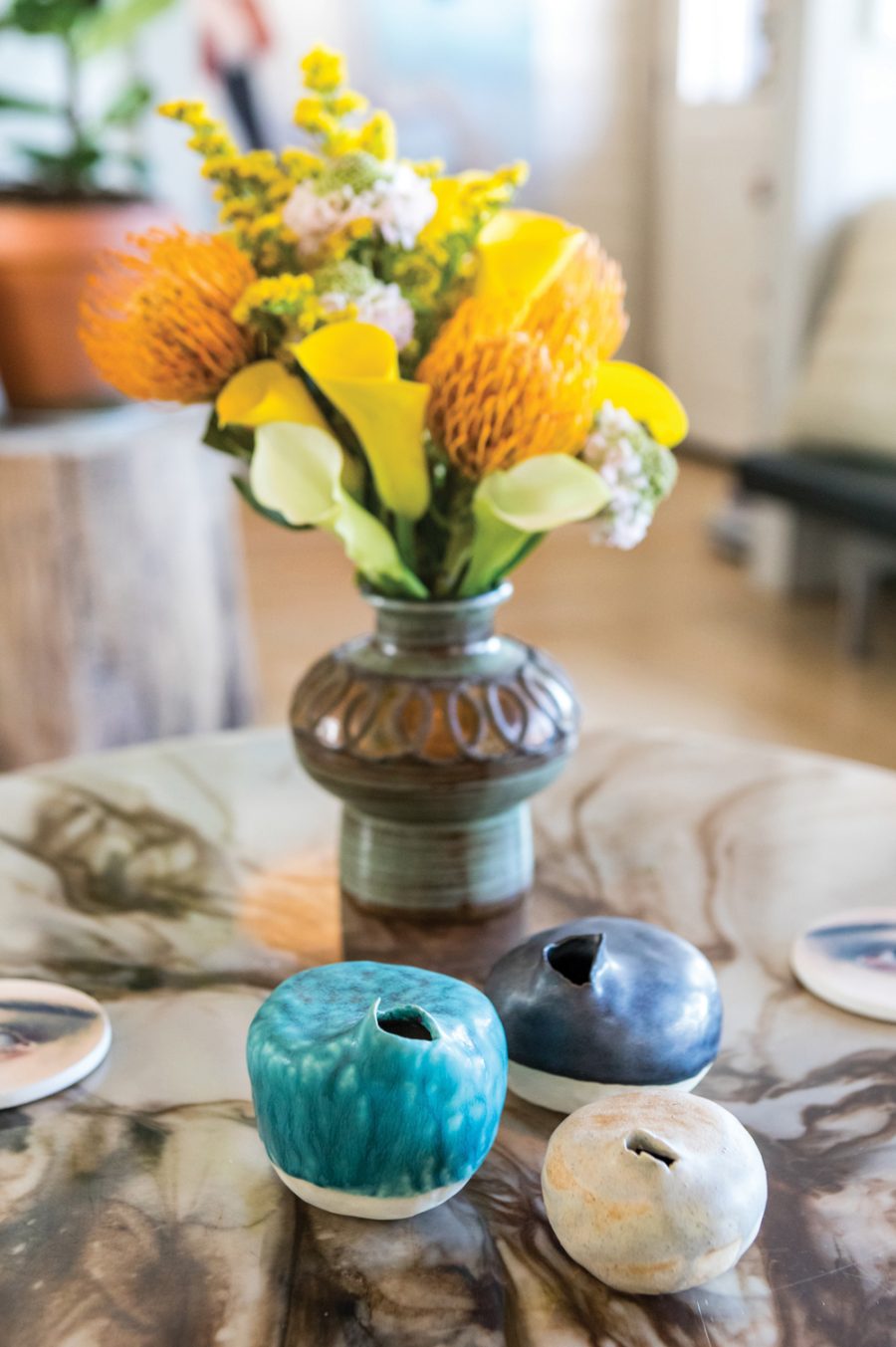 A collection of Carr-White’s hand-built pottery decorates a table in the living room. Part of the “murmur” collection at Vataklon.com, the almost entirely enclosed pinch pots are comprised of a variety of clays and glazes.

To find a solution that would serve the family’s needs and sit easily within the landscape they loved, the couple hired architect Juhee Lee-Hartford and River Architects in Cold Spring. Situated at the southern end of the structure, the home’s small kitchen needed a complete overhaul. It was also the ideal spot for a passive solar addition that would expand the home to 2,800 square feet while working within the bounds of the existing footprint. The passive solar design would work within the bounds of the home’s solar “footprint” as well, utilizing the angle of the sun’s daily and seasonal track to infuse the formerly dark interior with much-needed natural light.

Completed in 2016, the new wing has a decidedly contemporary edge. The soaring roofline, angled to the east, allows for three banks of insulated, tilt-and-turn windows to capture not only the light and warmth of the morning sun, but also unobstructed views of the pond. The south-facing glass entrance—trimmed with a pop of yellow to contrast the dark gray and cream exterior siding—has a bank of four floor-to-ceiling windows. By almost entirely removing the wall between the kitchen and living room and bumping out the kitchen’s footprint slightly to the east, the now predominantly open space flows easily between old construction and new.

Downstairs, the precise design allows sunlight to flood through the entrance hall, into the adjacent kitchen and dining area, and even reach into the original living area beyond. Upstairs, rows of east-facing windows infuse the master suite with light, and two glass doors lead to an open deck above the newly created dining area below. Above the southern entranceway, Carr-White has an office with a row of south-facing picture windows.

Along the western edge of the master suite, a maximalist bathroom enjoys views of the wooded slope behind the house. “The bathroom is my oasis,” explains Carr-White of the lavish space. To add drama, she hung a Roll + Hill chandelier above the oversized bathtub and installed matching fixtures alongside the vanity. She commissioned Beacon-based set designer and artist Sean Breault to create a custom iron-and-glass shower for the corner of the room, as well as additional structures in the downstairs bathrooms. 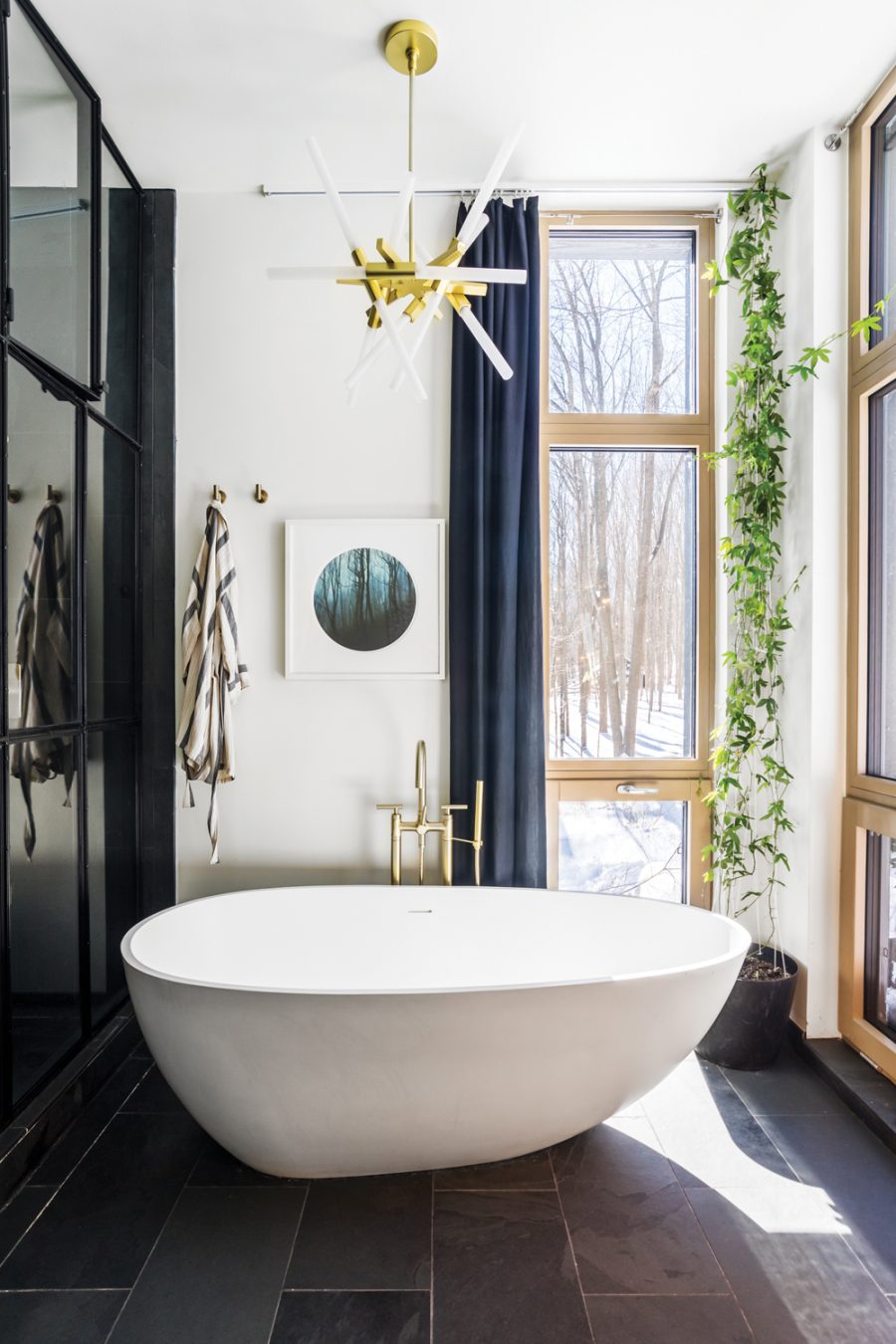 The second-floor master suite includes a luxurious, west-facing master bathroom. “It’s a little maximalist, but I like a maximalist bathroom,” Carr-White explains. Above the free-standing tub she installed a Roll & Hill chandelier. Both master suite and downstairs bathrooms include original iron and glass shower structures custom created by iron artist Sean Breault of Beacon. 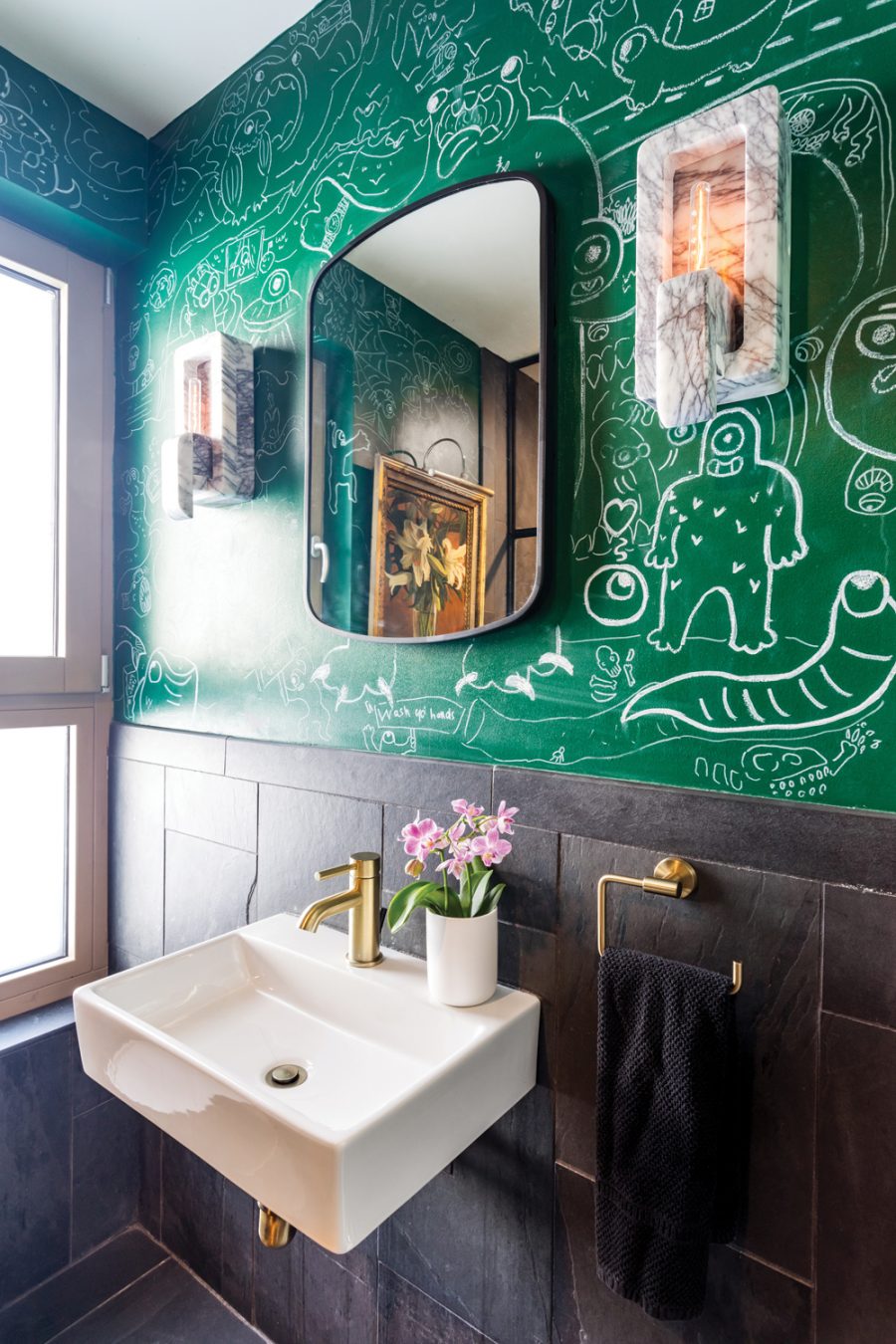 Carr-White commissioned her youngest son to give the downstairs bathroom a distinct, whimsical flair. “He did it as an early COVID project,” she says. “I told him ‘go to town’ and he painted the graffiti.” New York-based artist Derek Buckner created the painting reflected in the vanity mirror.

After the addition was completed, Carr-White was faced with the problem of blending both the stark, modernist wing and charming cabin into one coherent design. “Marrying the two together in a way that didn’t look like Frankenstein’s monster was my next big challenge,” she says. For the answer, she looked outward—to the pond and wetland landscape that had originally beckoned the family. “For this house, the views and location are everything,” she explains. “I tried to highlight the conversation between the interior and exterior in terms of palette and textures, heighten it a bit.”

The first-floor addition is laid with slate tiles throughout and centered around a partially open walnut staircase leading to the master suite above, as well as a newly expanded basement den below. Carr-White became so enamored by a slate of rainforest green marble she found at a local vendor that she designed the entire kitchen around it. Utilizing the marble to form the top and short ends of a large rectangular island, she then chose a moss green color scheme for the kitchen cabinetry and drawers, and trimmed the island and a wall of open glass shelving with walnut. 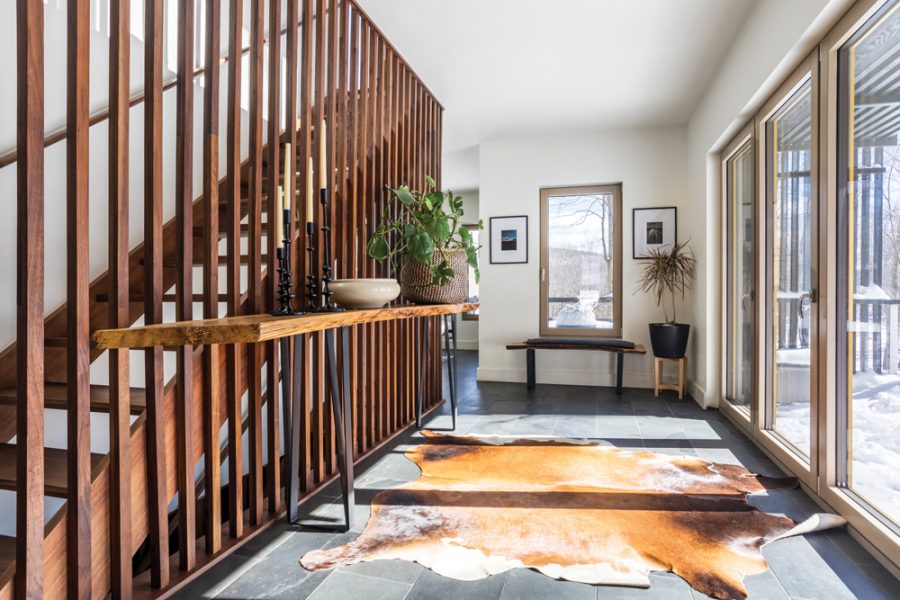 The home’s south-facing entrance has a slate tiled floor, glass doors, and floor-to-ceiling windows. The walnut balustrade extends between the first and second floors, as well as the basement den, creating a wood screen between the stairwell and entrance.

To harmonize with the home’s new kitchen design, the cabin’s living room required a complete makeover. “I wanted to give the space a more industrial modern, open feel,” she explains. Carr-White painted the wood-paneled walls and vaulted ceilings white, and the room’s ceiling beams and trim a dark grey to match the adjacent slate tiles. She also bleached the original plank floorboards beige. 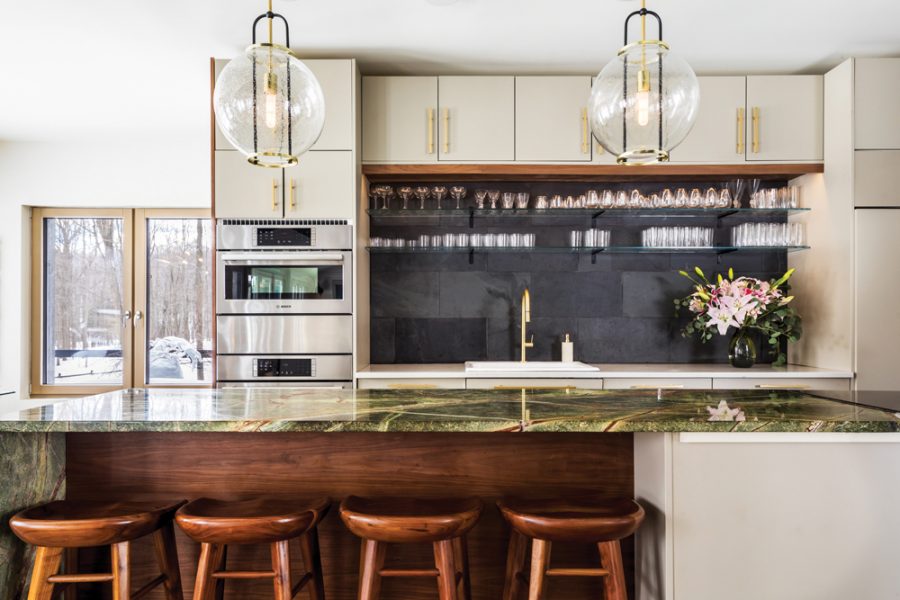 The new kitchen and dining area features soaring ceilings, as well as south- and east-facing insulated, tilt-and-turn windows. Carr-White chose rainforest green marble for the large island counter and trimmed the kitchen and hallway with walnut. She then planned the cabinet colors, fixtures and kitchen appliances to match. Throughout the home, Carr-White utilized grey slate tiles for floors and wall trim. Here, they form a neutral backsplash to complete the space.

In the center of the room, Carr-White reimagined the fireplace to tie the entire multi-hued space together. She retiled the fireplace mantel with ceramic tiles sourced from Modcraft in Beacon. Finished with a glaze called “Stannic,” the shimmering yet opaque tiles are reminiscent of the pond’s surface, containing and reflecting many of the colors and textures incorporated throughout the surrounding design. “Their color isn’t quite silver and it’s not really gold,” she says of the tile choice. “They are kind of bronzy and there’s a little light green in there, depending on the angle. Instead of sucking in light, they reflect it out.” 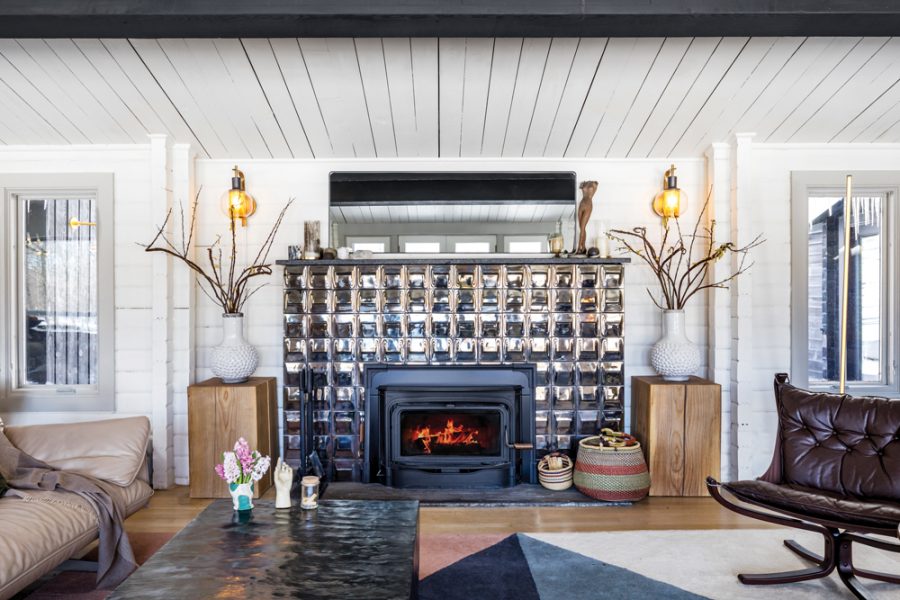 The mantel is tiled with three-dimensional wall tile from Beacon-based company Modcraft.

With both their home’s design, as well as their lives, the family seems to have blended the best of city culture and wildlife, traditional and modern, old and new. White’s husband regularly travels to New York where he’s had multiple plays produced on and off Broadway. (In 2018, Edie Falco and Michael McKean starred in White’s political drama “The True.”) At home, the family spends a bit of each day enjoying the pond. “The kids collect snakes and swim. I paddleboard and my husband fishes,” says Carr-White. “The pond offers a different kind of serene beauty each season.”