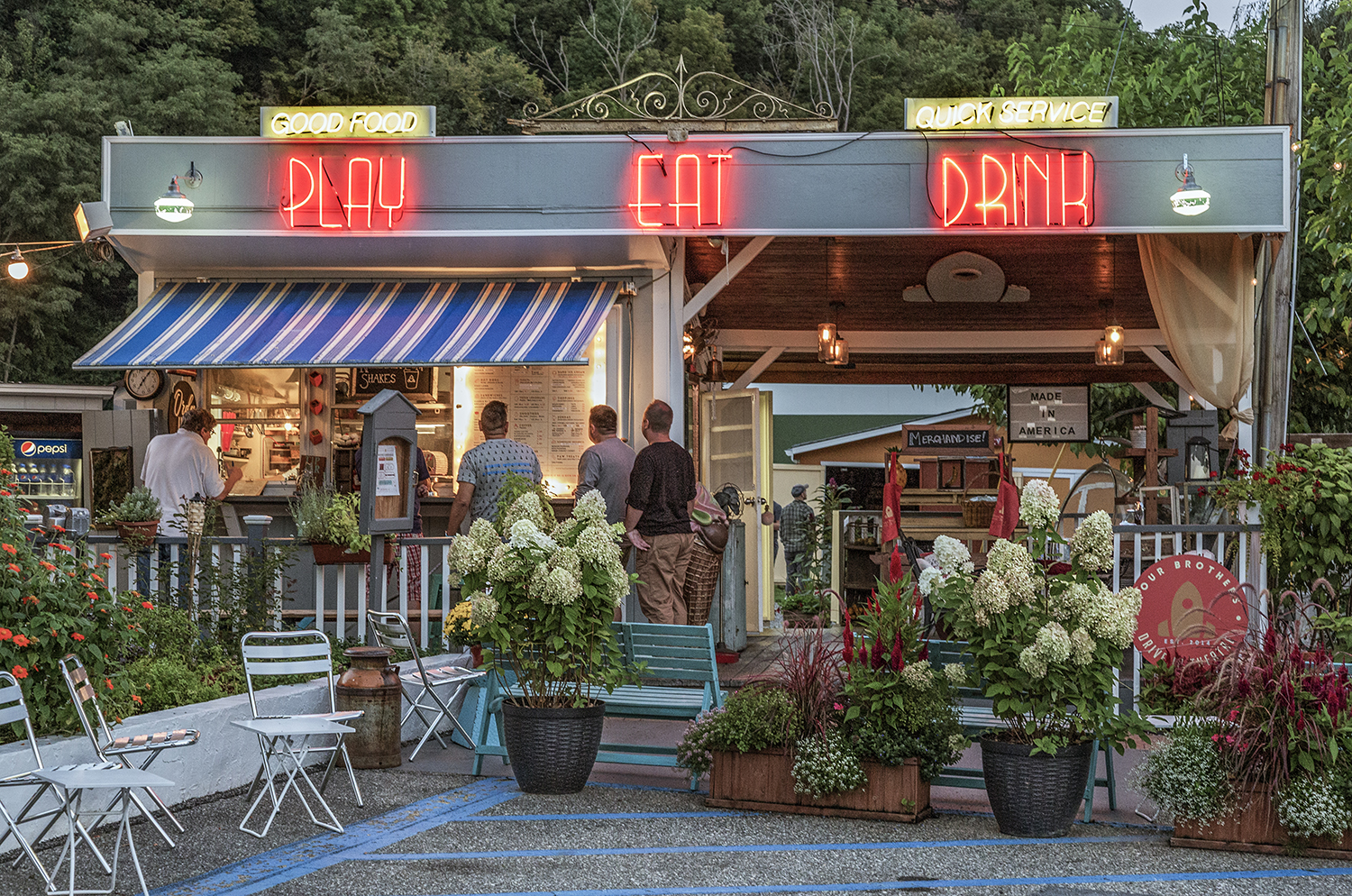 Nearest Hospital: Sharon Hospital is five miles away, across the border in Sharon, Connecticut.

Schools: The Webutuck School District serves the town of Amenia, with an elementary school, middle school, and high school covering Pre-K through 12th grade. The hamlet of Amenia also contains two schools specializing in educating children with learning differences: the Kildonan School, a private boarding and day school for grades 2 through 12, and the Maplebrook School, a private boarding and day school covering ages 11 through 18. In Ghent, a 45-minute drive, the Hawthorne Valley Waldorf School enrolls grades kindergarten through 12.

You can learn a lot about the history of the hamlet of Amenia simply by driving east on Route 44 toward the town, and then pulling off at the scenic overlook as the road takes a sharp downward curve. This is virtually the same viewshed—replete with horse farms, wide fields, and rolling hills, as well as  the Southern Taconic mountains and the cloves between them—that drew generations of Europeans to this land, starting in the early 1700s, and inspired its name: Amenia, derived from the Latin word amoena, means “pleasant to the eye.” Today, the town’s seven tiny hamlets are scattered across that bucolic vista like fallen leaves.

Rather refreshingly, Amenia’s seven spread-out hamlets—Amenia, Wassaic, South Amenia, Smithfield Valley, Amenia Union, Wassaic Creek, and Sharon Station—still haven’t merged into one sprawling, continuous village, the way many other Hudson Valley hamlets have done over the past few hundred years. That’s thanks to the local topography: There simply isn’t any room in between the many steep, sloped hills—each surrounded by thick marshes—for the hamlets to get much bigger. In fact, the area’s indigenous Pequot tribes coined a word for the landscape: Wassaic, which is now the name of one of the hamlets, means “difficult to get to.” As Vicki Doyle, a longtime resident who’s served on the Wassaic town council for almost 15 years, puts it: “The buildings go in the only places they can go. [The land] maintains a balance between the natural and the built environment.”

But what about all those wide-open fields? Those are mostly a mix of horse and dairy farms that the town has been working to protect and preserve. Although some local farms are being bought by developers, conservation easements ensure that the majority of the properties are left open and untouched so as not to destroy Amenia’s namesake view. 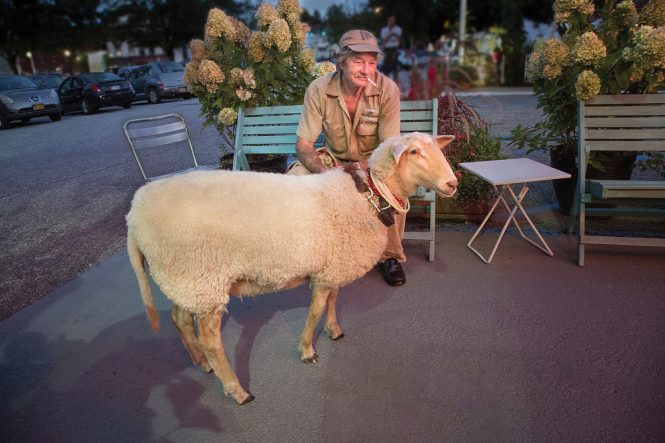 A local farmer enjoys a respite in town with one of his herd.

It’s easy to see why developers would be eager to get their hands on that land. Amenia is a paradise for lovers of the outdoors, with ample space for hiking and fly-fishing as well as excellent golf and tennis facilities. The Harlem Valley Rail Trail starts at the Wassaic Train Station and runs for 10.7 miles north to Millerton. Another 14-mile section, picking up at Millerton and ending at Under Mountain Road, is expected to be completed next year, and the Harlem Valley Rail Trail Association is working on raising the funds to build the trail all the way to Chatham for a total length of 46 miles.

Since Amenia was founded, its landscape has inspired radical free-thinking, from the abolitionists who met there in the 1700s, to the transcendentalists who gathered at the Troutbeck estate (now an inn and restaurant) in the 1800s, to the meeting in the early 1900s at Troutbeck that gave birth to the NAACP. Today, the tradition of philosophical exploration is carried on by the Wassaic Project, a year-round institution that offers arts education, lectures, gallery showings, films, and even an annual excuse to get a bunch of people together in a field to burn things and blast heavy metal music at the annual Heather Metal Parking Lot festival.

But despite such world-class weirdness—or maybe because of it—Amenia is still the sort of sleepy small town where Santa comes to the library every Christmas, the streets fill with parades during summer, and everyone comes out to root for the local baseball team. For retirees feeling nostalgic, or weekenders looking to buy a home as physically and spiritually as far away from New York City as possible—yet on the Metro-North line—this is it.

But life in Amenia is a bit tougher for working residents, as evidenced by the school district’s shrinking enrollment. The town’s population is getting older, and jobs in the area are getting harder to come by. A few local factories, including the Harney & Sons tea factory in Millerton, continue to employ a lot of the town’s working-class residents. 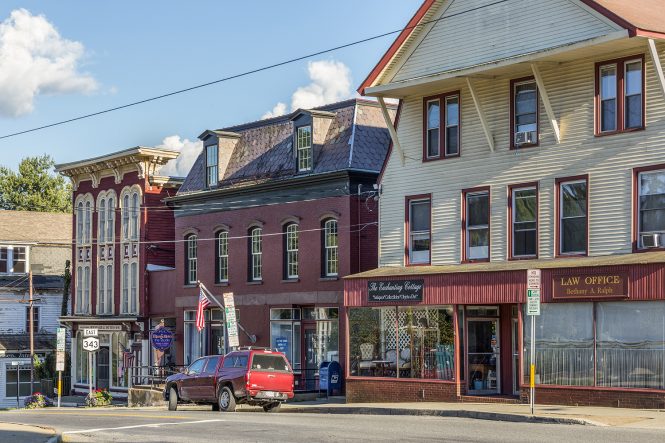 Amenia’s mix of retirees, wealthy weekenders, and full-time working-class residents is beginning to create some disparity in the housing market. But stunning bargains can be had for those who want to live within the clustered hamlets, like a four-bedroom Victorian in excellent condition for under $300,000. A slightly larger four-bedroom house from the 1880s was listed for below $400,000 at press time.

On the other hand, if you’d like to acquire a big chunk of that famous viewshed for yourself, and you’ve got about $17 million to spare, you could end up with a 432-acre former equestrian farm from the 1700s with several restored buildings that offers 11 bedrooms, 11 bathrooms, and 13,000 square feet. A smaller, 283-acre, still-working dairy farm with three houses and a barn is currently going for $4.25 million. And if you’d prefer not to buy the farm (yet), more modest contemporary homes, sized between 2,000 and 5,000 square feet and with single-digit acreage  but still great views, can be found for $500,000 to $1 million.