Just as Young mi Kim’s career as a ceramicist took off in Brooklyn, she realized she had to move out of the city. Fresh off her first solo exhibit in the early 2000s, she recalls feeling confident about her craft. But then 9/11 happened. It was the push she says she needed to take her son and move upstate—and launch her creative trajectory.

Driving her son to camp at Frost Valley in the Catskills each summer had left Kim dreaming for years about living in the country. Plus, the Hudson Valley reminded her of Yangju, South Korea, where she spent her childhood before emigrating to New York City with her family when she was 12.

So in 2002 she bought her current home on a winding country road in Bearsville—a rustic, cozy-yet-airy house with a deep red exterior and a wood stove in the kitchen—and left New York City. Making pottery her focus, she created the live-teach-work space now known as Doye Studio, which she named with the Korean word for ceramics. 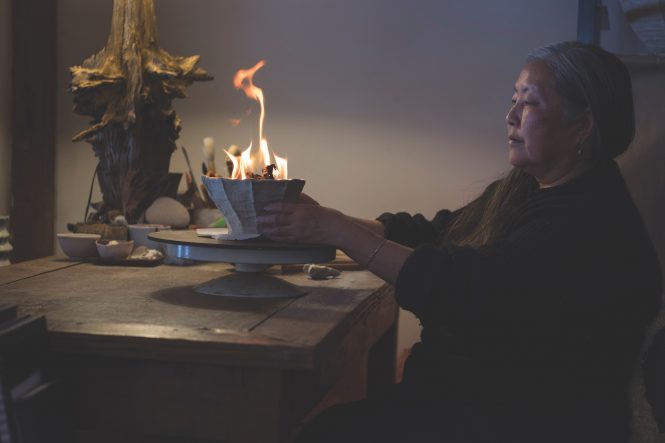 Today, virtually every surface of the space showcases examples of her work.Kim initially studied painting before turning to ceramics, and when her son left for college, she pondered going back to art school. But the idea of graduate school didn’t completely jive; Kim says she realized she was most interested in “making work that expands my heart and other people’s hearts,” rather than focusing on conceptual ideas.

So, instead of earning an MFA, she hunkered down at home and “created a graduate program here, by myself.” For 10 years, she says, “I just worked. No TV, no anything. I didn’t even know how to use a computer until a few years back.”

Through meditative repetition, Kim developed her signature style: hand-built, hand-fired vessels of coiled stoneware or porcelain clay. While some of her pieces are otherworldly, naturalistic shapes reminiscent of seed pods, gourds, shells, or undulating underwater plants, others are geometrically shaped. Some of the pieces’ surfaces are veiny, bumpy, or lacey; others, like her white stoneware tea sets, are small, smooth forms glazed in a wide array of whites. Regardless of their look, each piece is painstakingly formed, a meditation solidified. With every piece, Kim has formed each curve and groove with her own fingers, sans tools or molds, giving it an unusual intimacy and vibrant individual personality. Sometimes Kim lets the clay’s texture show through, other times she uses color glazes in

a mostly natural palette. Her 2013 porcelain series “Through Landscape,” conveys her emotions while traveling from to Sweden and the shock of encountering Scandinavia’s long, dark winters and brightly lit summer nights. 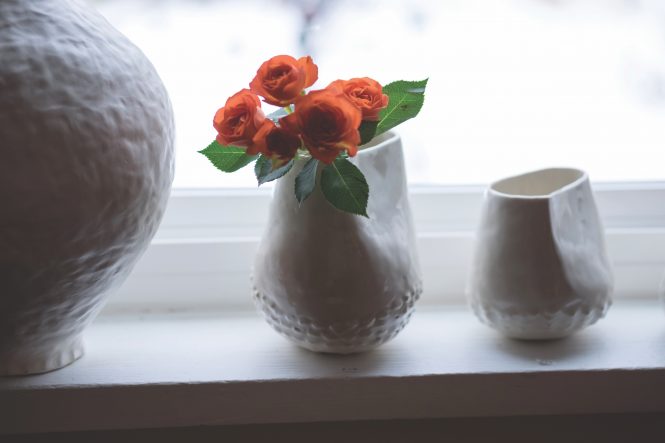 Although Kim makes each piece functional, she also notes that most of the people who collect their work “tend to really like living with them, just to have a little friend.”

While Kim finds that living in Bearsville makes for an inspiring creative environment, it can also be isolating. After returning from a nearly three-year stay in Florida to care for her ailing mother, she remembers feeling particularly alone and craving connection. So she formed her own “community of pottery people,” and began teaching ceramics to small groups at Doye Studio in the summer. In the winter, she expands her offerings to provide a creative respite from the cold weather and a place for communing. “I think [my students] healed me, coming back home and finding community through them,” she says. As a member of the Woodstock Byrdcliffe Guild of artists, she also teaches in Byrdcliffe’s summer arts program.

“If I have any doubt about anything, the plants and trees are saying, ‘Okay, you’re home.’”

But ultimately Kim feels as deeply connected to her land as she does to her work and her students. She took up gardening when she moved upstate, and now her property is replete with flowers and plants, as well as trees that she considers nourishing for both body and soul, including apple, pear, and olive; some of the plants and trees have sprouted up wild, others were carefully sown. Kim says she considers their offerings an immense blessing and a compelling force that keeps her here. “If I have any doubt about anything, the plants and trees are saying, ‘Okay, you’re home,’” she says. 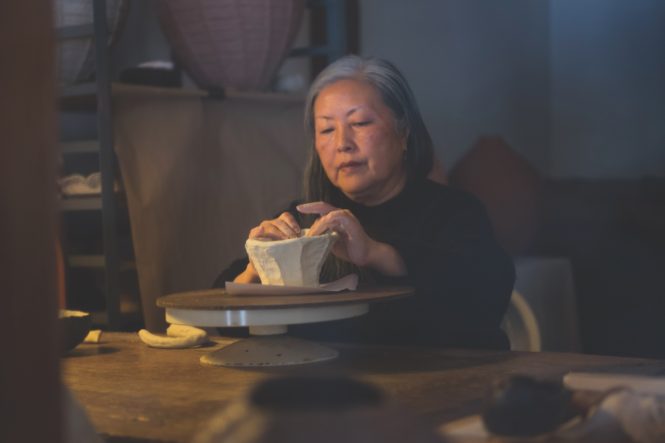 Likewise, Kim’s distinct style serves as a refreshing and comforting baseline. “I’m still not tired of these forms,” she says. “I see so much pottery now that is incredibly fun and colorful and drippy, and I enjoy it, but I come back and I feel I can breathe with these pieces.”