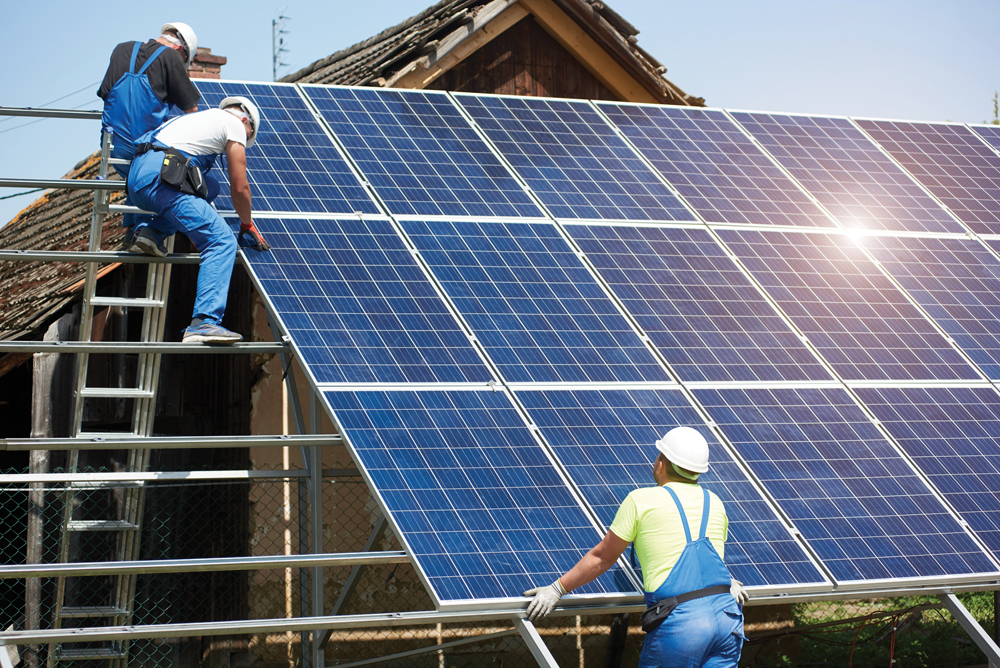 At the beginning of 2020, the solar industry was poised for growth. Then it was hit by the same work-busting but necessary shutdowns that decimated restaurants, cultural venues, and other businesses whose work is specific to a place. Workforce numbers fell 6.7 percent from 2019, down to 231,474, according to the 2021 annual Solar Jobs Census. While it’s possible to put solar panels on a roof without customer contact, it is not so easy to sell those panels, nor to get the attention of distracted people. Those reductions impacted every occupation in just about every state, and companies are still recovering.

Still, the industry installed record amounts of solar, thanks to increased productivity—a result of larger systems being built, on average, and an easier sales process as the technology is mainstreamed.

“We did have significant layoffs for a few months, then we started ramping back up with site visits as soon as that was possible,” says Jason Iahn, vice president of Lighthouse Solar in New Paltz. “Soon, we were booking consistent business and now we are pretty much nonstop. There are other challenges now, like shortages of components, but there’s a lot of upside with the infrastructure bill. We are optimistic.”

Anthony Sicari, president of Modena-based New York State Solar Farm, found an opportunity to pivot powerfully during the shutdown. “Everything went digital for the first time, and it made solar the way it should always be: easy to access,” he says. The company made constant use of Zoom, drones, and customer photographs of their spaces to do touchless assessments and system designs. “Even our sales and operations meetings went remote,” Sicari says. “For us, it brought everyone together.”

At Rhinebeck-based SunCommon, the shutdown forced adaptation and brought efficiencies through online marketing campaigns. “More efficiency means more time to innovate,” says Madeline Brydges, senior manager of digital marketing. “We were able to spend more time building our business acumen and training our teams on new products like the Tesla Solar Roof, even running a pilot to become the first certified installer of this new technology.”

For customers, too, the change opened eyes to renewables and resilience, building enthusiasm for battery storage as well as solar panels. “For the first time ever, people’s homes became their offices so their electricity usage went through the roof. They were looking at their utility bills and wondering how they could save. Commitment to following through was much higher. And it was much more interactive; people saw the people behind the company,” says Sicari.

This boost in efficiency and innovative thinking can only help as the solar industry goes into growth mode. To reach the 100 percent clean electricity goal set by the Biden administration, the solar industry expects to need over 900,000 workers by 2035. To prepare for this rapid expansion (and keep its existing workforce), the industry has been paying greater attention to diversity, inclusion, and wages. The Solar Jobs Census notes that 10.3 percent of workers in the industry are unionized, a level similar to other construction trades. While wages are not always competitive with those of fossil fuel and nuclear power workers—many employed by larger companies—solar wages are on par with similar trades such as electrical work.

In particular, the industry is actively courting veterans. A key certifying agency for solar installers, the North American Board of Certified Energy Practitioners, has just released a new, streamlined eligibility criteria for veterans wanting to take the professional exam as a certified installer, who can now count relevant military experience as on-the-job training.