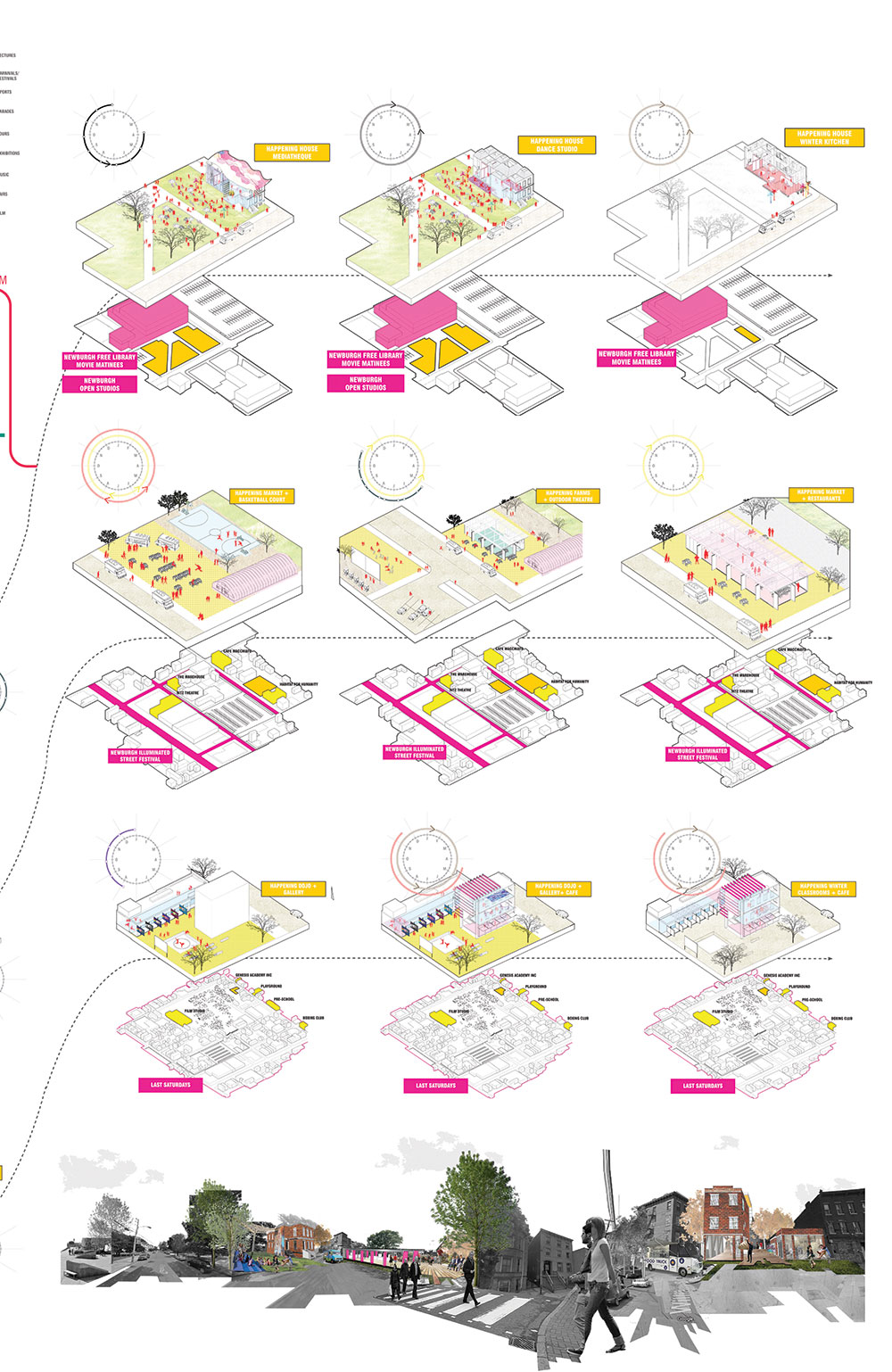 As Hudson Valley residents know all too well, while many of the region’s cities are in the midst of resurgence, with New Yorkers flocking to them, while others, like Poughkeepsie, lag behind. But Poughkeepsie will become the next “in” city if urban design students from Columbia University’s Graduate School of Architecture, Planning & Preservation (GSAPP) have their way. In 2016, GSAPP’s annual Hudson Valley Initiative (HVI), a research platform and archive, allowed students to propose solutions to Poughkeepsie’s problems.

HVI students utilize community feedback to create activist proposals for the region, explains David Smiley, the program’s assistant director. “It’s part of our program to look at the Hudson Valley because it’s close to us, and what goes on there affects us—we’re downriver in New York City,” he says.

A collection of the 2016 HVI students’ projects, Justice in Place: Design for Equity & Regional Currents, was displayed in January at the Mid-Hudson Heritage Center in Poughkeepsie. The projects explore how equity and justice can be nurtured spatially within the Poughkeepsie community. So what did HVI students see as Poughkeepsie’s issues? Smiley listed the city’s inequality of food systems and high incarceration rate as well as the need to revitalize Main Street and attract new industry.

“We know nobody’s going to be writing a billion-dollar check soon, so we study existing conditions and figure out what assets there are,” he says. Students examined Poughkeepsie’s status as a food desert, defined as an impoverished area that lacks fresh produce and other healthy foods, due to a dearth of grocery stores and farmers’ markets. One group proposed opening bakeries that use local produce and teaching high school students how to farm, harvest, bake, and deliver food. Another group proposed helping high school students create small farms on the city’s many vacant lots. “So it’s not depending on some system from somewhere else coming in to save it,” Smiley says. “Let’s get kids out there and teach them skills as well as how to change their diets.”

HVI students were surprised that Poughkeepsie’s only current infrastructure project is the new Dutchess County jail. “It’s kind of ironic if incarceration is your number one economic development engine,” Smiley says. Students explored training people who are coming through the [jail] facility for local industries. “A student looked at craft brewing and teaching formerly incarcerated people to join the craft brewing industry which is really blossoming throughout the Hudson Valley.”

Smiley readily acknowledges that such proposals are idealistic. “Obviously, there are additional jurisdictional questions and regulations questions and tax questions about these projects that the students haven’t answered,” he says. “But we push them to change the conversation and give all the people who might see their proposals—including elected officials and nonprofits—some new ideas to talk about.”
If attendance at HVI’s opening was any indication, a new conversation has begun. Guests included elected officials; local nonprofits Family Partnership Center, Hudson River Housing, Middle-Main, and Dutchess County Arts Council; and Poughkeepsie-born architect Michael Murphy, who’s opening an office of his Boston-based non-profit, MASS Design, in his hometown.

“It’s hard to get things done because money’s tight and politics are changing,” Smiley admits. “But we’re committed to the Hudson Valley. We want it to be recognized not as ‘go see the fall foliage,’ but as a place of industry and good schools—a real place to live.”

So, upstaters and downstaters, when it comes to the Hudson Valley’s urban planning, let’s all keep talking—and listening—to each other.