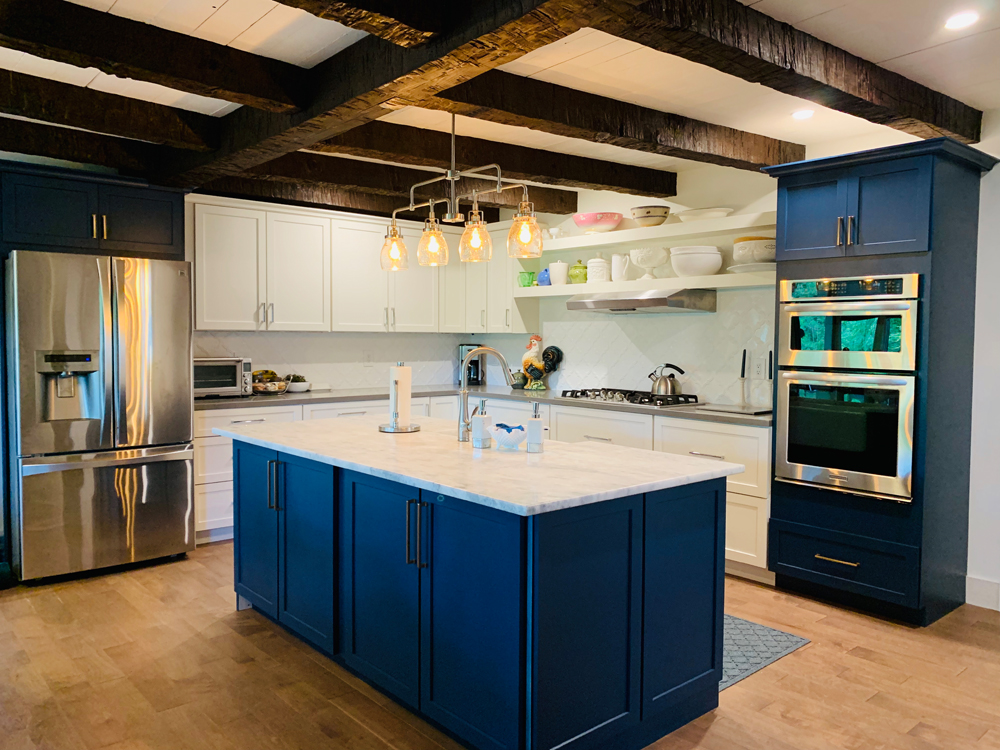 In the 1990s, the music world had written off Carlos Santana, who hadn’t had a sizeable hit since 1971. Enter music-business guru Suzanne Hilleary-Cameron, who paired him up with composer Itaal Shurr on a song Shurr had cowritten with Matchbox 20 vocalist Rob Thomas. The song, “Smooth,” won three Grammy Awards in 1999 and became the second-best-selling single of all time. In 2000, its success allowed Hilleary-Cameron and her husband, musician Jeffrey Cameron, who together run the music licensing and management firm WACBiz (Writers Artists Composers Business), to purchase an 1864 farmhouse in Kerhonkson.

“Sometimes we call it ‘the house that “Smooth” built,’” Hilleary-Cameron jokes. But the couple’s budget for renovating was tight, and the 5,000-square-foot antique structure badly needed fixing up. After redoing the second floor and raising the roof to give the couple and their two sons more living space, it was time to attack the kitchen.

“It wasn’t terrible-looking, just sort of IKEA-ed out and not to our taste,” says Hilleary-Cameron. “The big problem was the floor.” After decades of moisture seeping from the unsealed stone foundation, the original wide-plank pine floor was in danger of collapse. Luckily, Hilleary-Cameron’s sister, Bronwyn Ferguson, is an interior designer (of AskBronwyn/RENOVATE) whose partner, James Stephens, is a master contractor (“the John Coltrane of wood,” says Cameron). In February, Stephens drove down from Vermont, and he and Cameron rehabbed the floor and took the walls down to the studs.

Cameron also built a set of wood foundation forms to mold the staggering 38,000 tons of cement that were pumped into the basement to seal it from the elements and stabilize the structure. The cracked stone foundation was repaired; cellar joists were remade; old plumbing was replaced by Heckeroth Plumbing & Heating; outdated wiring was redone by local electrician Michael Ponte (“Another musician, there’s so many of them up here!” Hilleary-Cameron says); soundproof, water-repellant insulation was installed; and moisture-resistant, sustainably made AdvanTech subflooring was laid down. 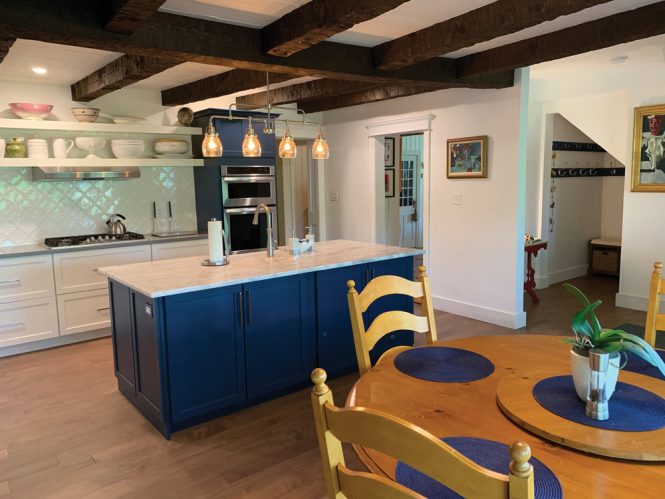 The ceiling’s original hand-milled wood beams were liberated from the plaster-covered plywood boxing in which they’d been encased for decades, and recessed spot lighting was installed along the back-wall counter area. Ferguson connected the couple with Omega Cabinets, where they worked with representative Heather Belanger of Lacillades LLC on final cabinetry designs. The counter’s backsplash was redone with Byzantine Arabesque Alice Blue ceramic tiles from TileBar, working with the new royal blue-and-white color scheme to give the room an airy Provencal feel. The like-new Bosch dishwasher in the refinished central island—whose chunky Latoscana porcelain farmhouse sink is set into a marble countertop from Barra & Trumbore in Kerhonkson—and in-counter GE gas stove came from a model home in Vermont. The Kenmore refrigerator was relocated from the counter’s right end to the left, and in its footprint Stephens built a cabinet for the wall oven/microwave unit. EaseLife stainless-steel hardware was used for the pantry’s new sliding barn door, and a Sea Gull chandelier and retro-chic Edison bulbs light the island.

Lastly, the 520-square-foot floor needed resurfacing. And with the WACBiz client band Little Days set to visit during Mountain Jam in June, time was ticking away. But the big-box store from which the couple had ordered the flooring couldn’t get it there on time. “But then we found the Carpet Store and Warehouse in Rosendale, which turned out to be a godsend,” says Hilleary-Cameron. “Within two days, they’d found us 800 square feet of Mohawk five-inch maple flooring, delivered, and installed it—for half the price of what the first place quoted us.” (The 280 extra square feet will resurface the staircase.)

The result is a cozy kitchen that feels like an Old-World tavern, yet is light and modern. “People compliment us about the upstairs rooms and I say, ‘Yeah, but have you seen the kitchen?’” quips Cameron.

The couple christened the new kitchen by inviting Bad Company drummer Simon Kirke and his wife for dinner. A classic Colonial revival dining set is nestled under a bay window with vistas of the surrounding Shawangunk Mountains. “The whole thing was about five months of crazy construction and making our meals with a hotplate, but it was absolutely worth it,” says Hilleary-Cameron, running her hand across the island’s marble surface. Like the song says: smooth.