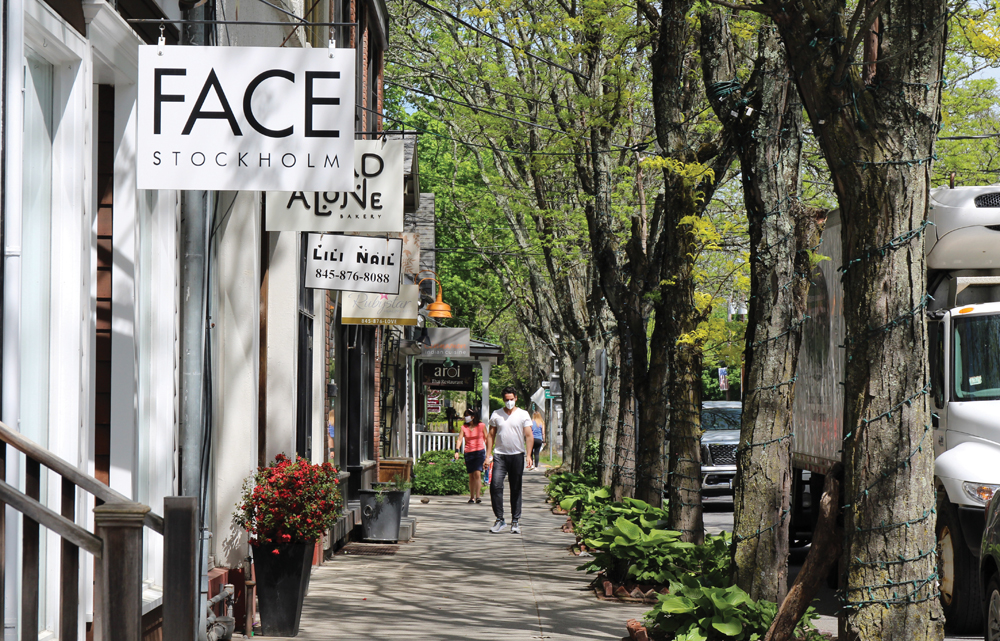 Proximity to Major City: Rhinebeck is 61 miles from Albany and 102 miles from New York City.

Transportation: Rhinebeck is 20 minutes from New York State Thruway Exit 19 (Kingston) via the Kingston/Rhinecliff Bridge, 15 minutes from the Taconic State Parkway, and just under an hour from I-84. The Rhinecliff Amtrak station, a seven-minute drive, offers departures every hour or two to both Penn Station in New York City and to Albany/Rensselaer, and train connections can be made to Newark International Airport. Closer airports include Stewart International in Newburgh (about an hour away) and Albany International (about 1 hour 10 minutes), and there are multiple airport car services connecting Rhinebeck to JFK, Newark, and LaGuardia airports.

Driving north on Route 9 just south of Rhinebeck, you enter the Hudson River National Historic Landmark District, a 32-square-mile strip of riverbank along which the one-percenters of a bygone age—many of them connected to the Livingston family—built lavish “country seats.” But as early as 1704, William Traphagen had already figured out that Rhinebeck was the ideal spot for hospitality and good times.

The Dutch had been settling in the area since 1686, and Route 9—then the Albany Post Road—had been built along older trails of the Wappinger and Wiccoppe natives, who were then hired as early mail carriers. In 1703, the trail was widened into a public highway, and Traphagen clearly had an eye for location. Still in operation as the Beekman Arms, the inn hosted founding fathers during the Revolution and everything from town meetings to auctions and tea parties after that, with a guest list that included, but has never been limited to, a great many bold-face names.

In the mid-19th century, Rhinebeck was renowned for woodworking and fine clothing. By the 1890s, Rhinebeck was famed for its violets, a cash crop that brought in a cool million some years. (From the Gilded Age through the Depression, the violet was the world’s most popular flower, and Rhinebeck was known as the Violet Capital of the World.)

The place once called the “Parlor of Dutchess County” for tidy streets, spreading greenery, and civilized welcome, remains on that track: smart but not smug, well-kempt but woke, with a rich civic life. Two colleges—the Culinary Institute of America just south in Hyde Park, and Bard College in Red Hook—pump out steady streams of culture and fine food.

The Scene in Rhinebeck

Through the pandemic, the town has pulled together in true Rhinebeck style. Citizens quickly organized Rhinebeck Responds, a “citizen-run effort to recruit volunteers, identify needs, and facilitate community service” in cooperation with government, civic agencies, churches, and neighbors, and residents have been helping support residents and their beloved small business community ever since. Beloved cultural institutions such as the Center for the Performing Arts at Rhinebeck and the Omega Institute for Holistic Studies took programming online.

“You have to be adaptable, draw on strength from your experiences and just move forward,” says Laura Pensiero, who came back upstate to open Gigi Trattoria in 2001. “The universe is bizarre right now, but it’s an awakening for a lot of people about how strong we really are.”

Trained in public health, Pensiero knew what to do and installed a plasma air bipolar ionization systems, ample sanitizing stations, and tempered-glass safety shields in her restaurant. “What got us through the takeout-only period was customer loyalty and core staff,” she says. “This is a town where people respect each other and care about the community, and we’re having none of the issues I’ve heard about in other places.”

Pensiero earned that loyalty. Rhinebeck’s dining scene is famously varied and dense—there are more than two dozen eateries within the few blocks of the downtown area. Residents and visitors can feast in fine historic style at the Beekman Arms, on Irish fare at Bia, on Japanese at Osaka, authentic falafel at Aba’s, and fine dining at Willow by Charlie Palmer at Mirbeau Rhinebeck, to name just a sampling. For those in the mood to cook, there’s Grand Cru Beer and Cheese, Sunflower Natural Foods, Oliva gourmet olive oils and vinegars, and the award-winning farmers’ market. 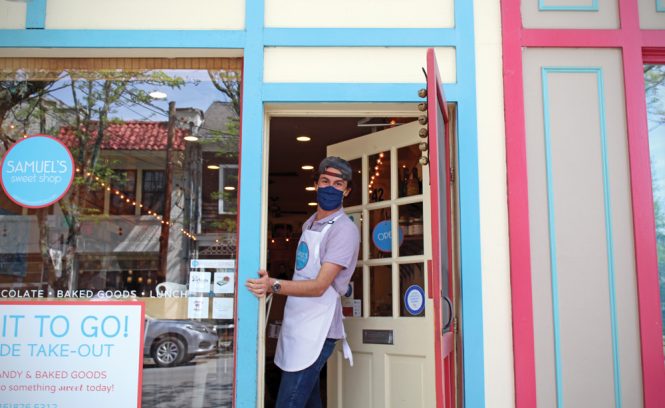 Montgomery Row, voted “best shopping block” by Hudson Valley magazine, offers everything from an indie book and music store to specialty paper goods to uber-cute kids’ store Sapling. That’s part of a wider shopping scene that includes the Rhinebeck Department Store, a decades-old purveyor of fine country casual, gifts, and home goods; Winter Sun & Summer Moon, specializing in locally and globally handmade wearables and specialty items; Hummingbird Jewelers works with over 75 master makers from around the world. There are also three candy shops—one of which, Samuel’s, is owned by Paul Rudd, Hilarie Burton, and Jeffrey Dean Morgan. Festivals normally held at the Dutchess County Fairgrounds, celebrating classic cars, sheep and wool, antiques, crafts, food, and more, as well as the outstanding county fair itself, were much missed in 2020—as were the world-class cultural offerings at Bard’s Fisher Center—but should be all the more joyous when they return. The Olde Rhinebeck Aerodrome offered socially distanced biplane rides all summer long. And Sinterklaas, a town-wide winter festival crafted by Jeanne Fleming, the artist behind New York’s Halloween Parade that’s a massive, magical love-fest for the community’s children, is providing online festivities this year and looking to next.

“This area stands up well to pressure,” says Pensiero. “I’ve got the farmhouse I bought in 1998 and I could cash out, take my dogs and my life partner Cornelius and go. But why leave? I love Rhinebeck.”

Rachel Hyman-Rouse, an agent with Gary DiMauro Real Estate, was celebrating an exceptional closing when we spoke in late October. “The quintessential dream farmhouse,” she says. “We started showing it Thursday and had to shut it down on Monday; we had seven offers. It first listed at $1,950,000; it sold at $2,550,000. Both the seller and the buyer were thrilled with the deal, and if I had 20 more I could sell them tomorrow. We’ve been busy seven days a week, changing lives.”

Buyers are seeking—and finding—homes with a touch of character, says Hyman-Rouse, not the “1980s vinyl-sided Colonials, it’s got to have some design virtues or a view. And now in particular, people want smooth transactions—there’s a premium on turn-key, move in-ready homes.”

Closer to the village center, one could find a cozy two-bedroom on a streamside acre with redone kitchen, bath, and mechanicals for $425,000 and a 19th-century two-story with wrap around porch and saltwater in-ground pool for $445,000.

Larger and statelier village homes were listing between $500,000 to $700,000, along with brand-new condos in the Gardens at Rhinebeck, and a three-bedroom Colonial farmhouse on a 2.2 acre River Road lot was listed at $575,000, a four-bedroom contemporary with river and Catskills views for $795,000.

Listed at just over a million dollars was a 16-bedroom, 3-acre estate with “good bones” but in need of some TLC. At $1,500,000, there was the 1840 Veranda House, a six-bedroom, six-bath Montgomery Street manse with fully updated interiors.