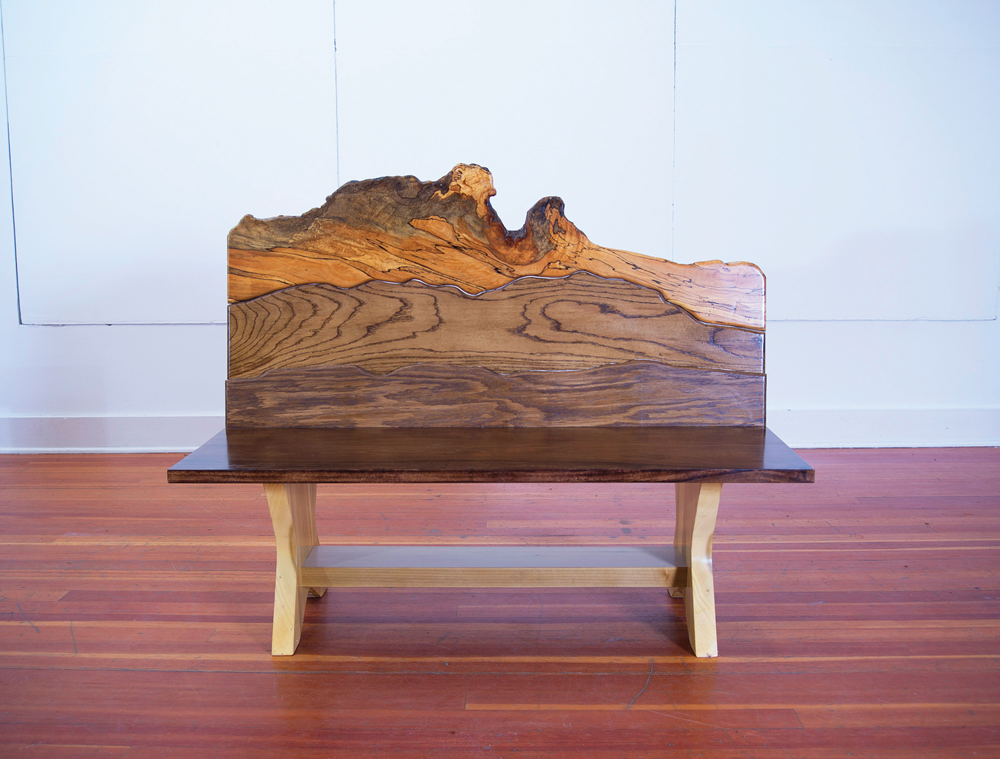 Rennie Cantine was born and raised in Woodstock and has called Byrdcliffe—one of the earliest utopian art colonies in the United States—home. There, he learned the craft of carpentry from his father as they fixed up the family’s c.1902 house together. By age 15, he was running all the saws and was rather adept at building. Following a stint on the West Coast studying environmental design and architecture at the University of California Santa Cruz, he returned home to raise his son—the 11th generation of Cantines in Ulster County.

Upon his return to the Hudson Valley, Cantine found work as the house carpenter at Byrdcliffe. Inspired by the woodworking shop and the furniture designs he found there, he began building benches—a whim that grew into teaching furniture-making workshops, receiving commissions (one, from Byrdcliffe, remains permanently installed on site), and pulling together a solo show featuring a dozen benches of his own design. 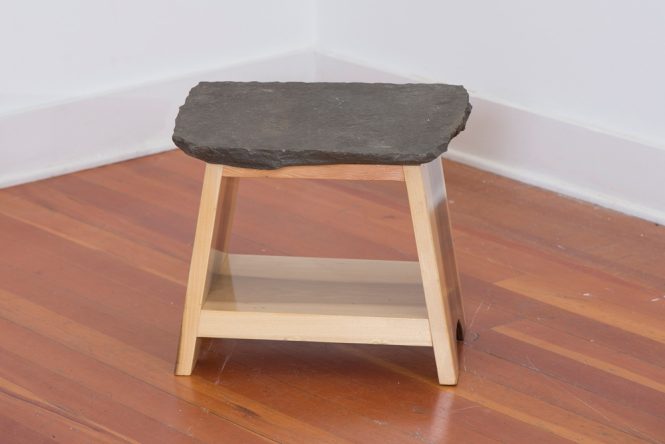 When the pandemic hit, Cantine turned to a lifelong love of nature and hiking while in isolation. As a kid, he hiked almost every peak in the Catskills—counting Mount Guardian and Overlook Mountain among his favorites (and for good reason: The latter peak rises over 3,000 feet and offers one of the best views in the Catskills). On one of his 2020 treks, Cantine reached a realization: “I decided my next bench project would reflect on the mountainscapes,” he says, before setting off to photograph the topography of his youth.

“I had this vision of being 1,000 feet above the [Ashokan] reservoir looking north, over the top of Ohayo [Mountain],” Cantine explains of the sweeping vistas, complete with crags, that became the back of each bench. As to the translation process? Cantine put his chosen image on a plotter, blew it up to the size of a four-foot bench, and traced it out. “It’s pretty accurate,” he says of the largely intentional design process that allowed him to capture the Catskills’ irregular ridgelines. 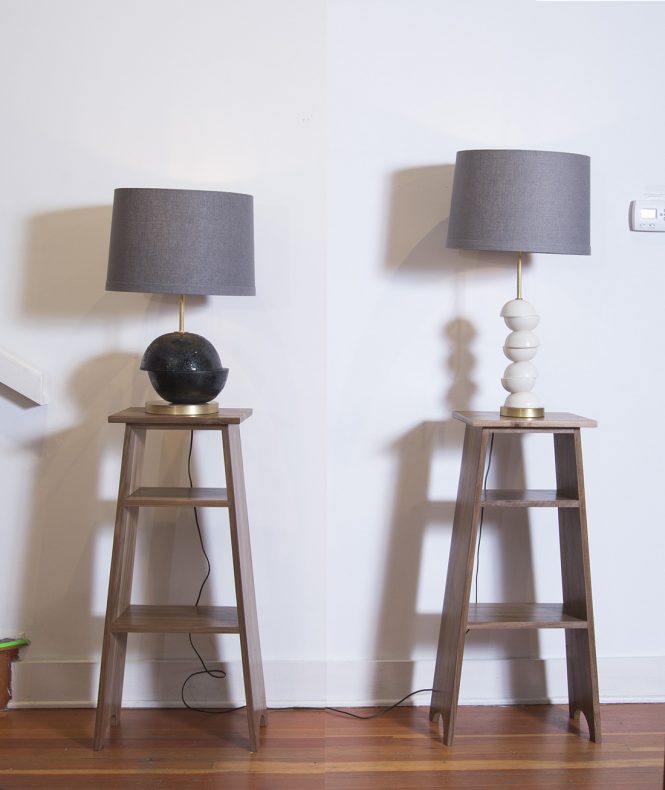 Cantine points to a pair of legendary local carpenters—Roger Shultis and Tim Schussler—both of whom influenced his work. When Shultis retired at age 94, he sold Cantine all of the wood from his shop, much of it harvested by his grandfather on the slopes of Ohayo Mountain. When Schussler died, Cantine bought all the boards his mentor had stockpiled.

“It was just this amazing treasure trove of wood,” says Cantine of his haul—which included a dozen species ranging from maple and oak to walnut and zebrawood, aptly named for the characteristic striped wood derived from various trees. “It was a one-in-a-million kind of thing,” he adds of the 10 truckloads—some milled, and some with live edges intact. From these options, Cantine fashioned the sprawling mountain scenes depicted in his Overlook benches and mirrors; those made of slabs with the bark left untouched by tools or hands are particularly dramatic. This eclectic oeuvre also includes bluestone stools, lamps, and—in a nod to another of Cantine’s passions—guitar sculptures. 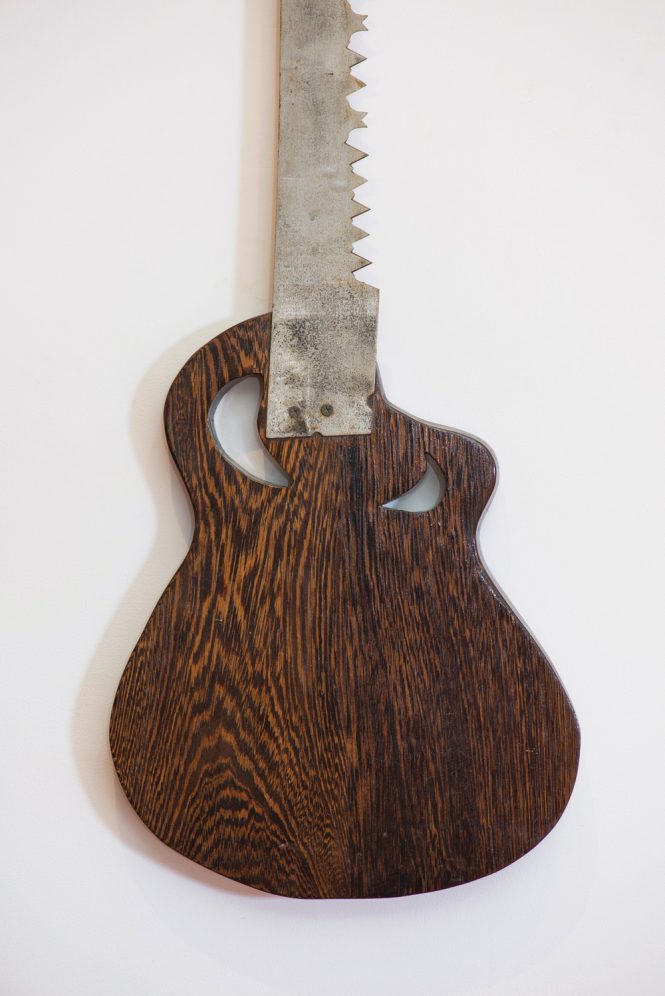 Two decades ago, the lifelong lover of music (who plays in the local band Sabrina & the Gems) was tapped to lend his talents to an outdoor sculpture competition and fundraiser for Byrdcliffe. Having developed a reputation for bringing guitar players together—“the best in the world”—he was asked to serve as music director for the benefit concert. Full of ideas, Cantine struck a different chord.

“I drew up 12 sculpture designs,” Cantine says, recounting a process that involved laying his Stratocaster on a slab of oak to make a template. The jury snapped up his first design. That year, Cantine brought each of the remaining sculptures to fruition—a move that morphed into the Woodstock Guitar Sculpture Exhibition. Every other year for the past decade, Cantine has provided blanks for local artists to embellish; the sculptures are showcased in village shop windows, then auctioned for charity. 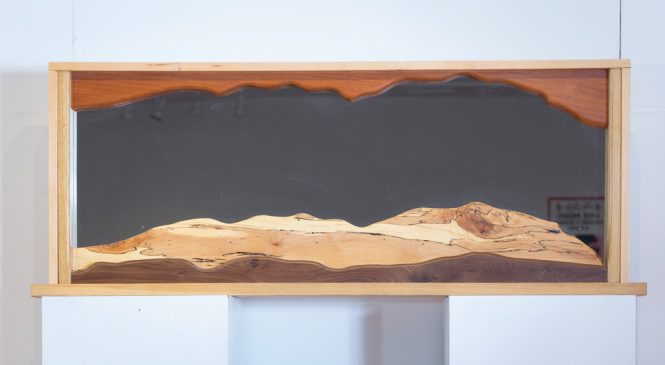 One year, Cantine bumped into Shultis at the Bearsville Post Office; turns out he had a small collection of antique, two-handed saws he envisioned making great guitar necks. Cantine thought them too priceless to accept, but Shultis insisted: “Have fun, create some cool sculptures, and make me smile when I drive through town.”

Suffice to say, Cantine’s done just that. From an innocuous studio that’s too small for visitors, he continues to connect the dots among Woodstock’s claims to fame as an eclectic community of artists, an oasis for music lovers, and a veritable playground for outdoor enthusiasts—to which Cantine feels blessed to belong. “I mean, it’s just the most beautiful place on earth.”