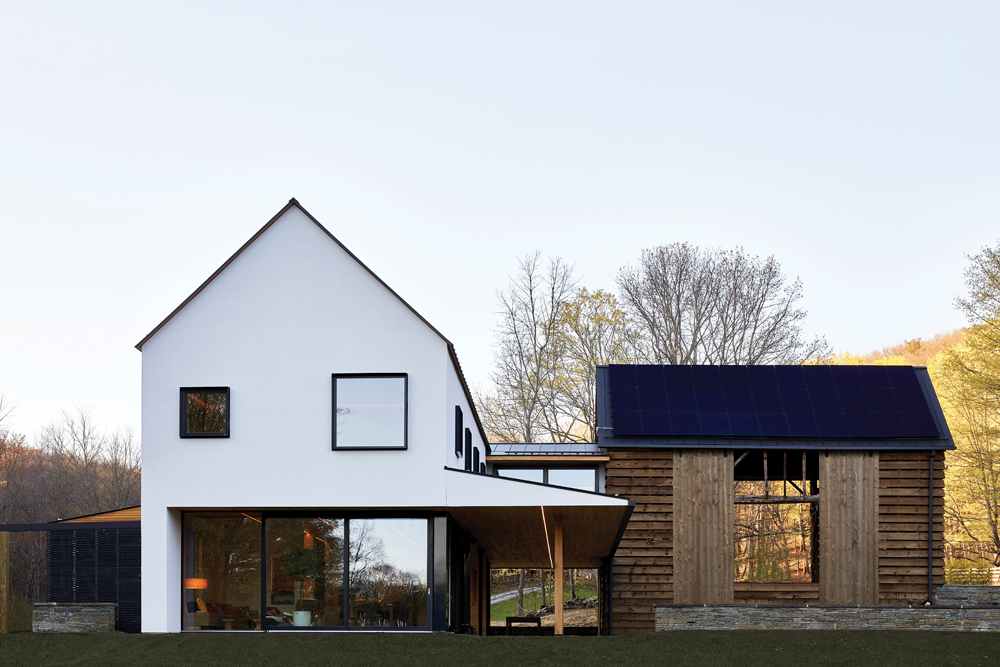 The writing is on the wall: Sometime in the next few years, New York State contractors will probably stop building new houses to be heated with gas and oil.

As politicians hammer out the fine print on the 2022 state budget, one of the key budget battles looming is over a ban on fossil fuels in new construction—and with most of the state’s Democratic legislators on board with some amount of climate action, the fight isn’t over whether to do it, it’s when. Governor Kathy Hochul has said she wants a ban to take effect in 2027. State legislators sponsoring the proposed All-Electric Building Act—Emily Gallagher in the Assembly and Brian Kavanagh in the Senate—want to see that happen sooner, starting in 2024. New York City is already moving on that front, with the recent passage of a local law that begins phasing out gas hookups in new construction in 2024.

It looks like a phase-out of fossil fuels in new buildings is coming sooner or later. Either way, Hudson Valley Passive House design expert John Loercher needs to scale up his business—and fast. “A few months ago, we started to hear all these statements—like [Hochul’s] State of the State address, talking about a much more aggressive rate of decarbonizing,” Loercher says. “Frankly, I was like, ‘Wow, I’ve got to figure out a new business model here, because there’s just not enough professionals right now to handle that sort of volume.’” Loercher is the founder of Northeast Projects, a Passive House design company based in the Columbia County town of Hillsdale. He’s also an instructor for the national Passive House Institute US (PHIUS), and serves as a volunteer for their local Hudson Valley chapter.

According to data from NYSERDA, energy use from building heating and cooling currently accounts for more than a third of New York State’s greenhouse gas emissions. If it becomes widely adopted, Passive House design could give a boost to New York State’s decarbonization goals, in more ways than one.

As more industries start to make the transition to cleaner sources of heat and power, inefficient buildings are becoming more of a problem on a society-wide scale—and not just because they create greenhouse gasses. The more energy our buildings waste, the more industrial electrical infrastructure we will eventually have to build in rural upstate New York.

“If, at this very moment, we were to snap our fingers and take every single home that’s on gas and heating oil off of those fossil fuels and put them on electric, our grid would break down. It wouldn’t be able to handle that,” Loercher says.

Over the next few decades, New York’s climate law will require every state agency to work toward the goal of shifting away from fossil fuels, methodically wringing greenhouse gas emissions out of every sector of the economy. If all New York had to do in the next few decades was replace half of the infrastructure of its electrical grid— the half that’s currently powered by fossil gas, and the transmission lines designed to carry power from fossil-fuel plants that will no longer run in the future—that would be a huge task in itself. But the job is far bigger than that.

Electric vehicles are taking to the roads in increasing numbers, creating new demand for electricity. In homes and buildings, electric-powered heat pumps that double as air conditioners in the summer will gradually begin to replace oil and gas furnaces, a technology shift that promises to raise the efficiency of home heating and cooling dramatically, but also to put greater pressure on the grid.

By around 2040, analysts at the New York Independent System Operator predict, New York’s peak levels of electricity use will no longer be in the summertime, when millions of old and inefficient air conditioners are on full blast, but in the winter, when heat pumps are working hardest. 2040 is also New York’s target date for a zero-emissions electrical grid, given legal force by the state’s 2019 climate law, and meeting that goal will require a massive buildout of new renewable power as well as new transmission lines to carry it to areas of high demand. The higher that winter peak gets, the more zero-carbon power New York will have to build to make sure the lights stay on in the coldest part of the year.

“What ‘Passive House’ is trying to do is meet the grid in the middle,” Loercher says. “By building to the Passive House standard, you get a significant reduction in primary energy use.”

Energy efficiency is getting more attention from state policymakers lately. In the early days of the passive house movement in the `80s, Loercher says, it wasn’t uncommon for a well-designed Passive House to save 90 percent on energy bills compared to a similarly sized conventional house. But as modern building code catches up with the physical realities of climate and energy, the gap between “regular” construction and Passive House design is narrowing, Loercher says. Another proposed bill that’s part of Gov. Kathy Hochul’s proposed executive budget, and that could be made into law this year, would tighten up building code and energy efficiency standards even further, bringing the state status quo a little closer to the lofty ideals of the Passive House movement.

If rising standards for the rest of the construction industry eventually means the Passive House toolkit won’t be special anymore—well, that’s kind of the whole idea.

Evangelists for the Passive House movement believe that with advances in building science as well as more widespread adoption, Passive House design will eventually “fulfill its promise and become the mainstream design and performance market standard in North America.” We’re not quite there yet in New York, but we’re getting closer.