Brad Lail was 14 years old when he threw his first pot. Following his parents’ breakup, his father—himself an accomplished potter—enrolled the family in a wheel-throwing class aimed at creating cohesion among the now fractured unit. Soon after, a wheel and electric kiln materialized at home (housed in an adjacent pole barn) where Lail sought solace—ostensibly blowing off steam while unwittingly honing a craft in the process. 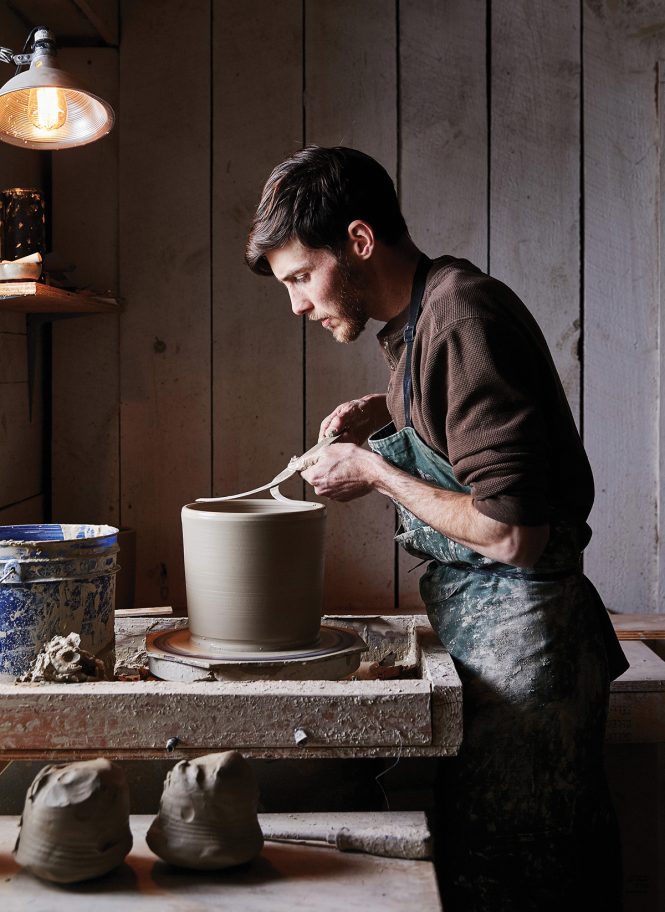 Brad Lail at the wheel in his Woodstock studio.

“I was obsessed,” Lail says, citing an interest that grew from the Earth and his relationship to it. He worked alongside woodfired potters in North Carolina, digging clay and making glazes out of wood ash; with his eye firmly fixed on folk pottery, Lail fashioned finishing tools from what he had on hand—carving a rib out of wood (or repurposing an old debit card for the task) and subbing fishing line for a wire cutter.

When it came time to fire his pieces, to sell at fairs around the region, Lail stacked wood in exchange for space in local potters’ kilns. While at college, on track to become a minister, Lail’s true calling emerged: to live in the woods, make pottery, and put food on the table. 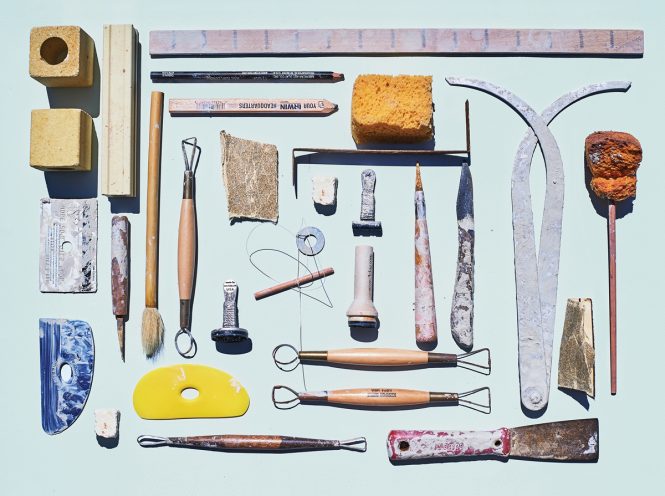 Lail stoneware is made with traditional tools and techniques, some dating back thousands of years.

“That’s all I ever really wanted in my life,” says Lail who, two decades later, is living his dream. Almost half the clay he works with is local, dug from the banks of a floodplain on the Housatonic River in Sheffield, Massachusetts. In fact, knowing the provenance of his materials grounds Lail. He makes all his glazes from scratch and retains a reverence for simplicity. As for the fine line between form and function, art and utility, Lail cuts straight to the chase.  “I consider myself a craftsman first,” he says, pointing to the years he spent as a journeyman potter in North Carolina, doing production work in other potters’ studios, as solidifying his stance on the age-old, art-versus-craft conundrum.

Using rulers and calipers to replicate whatever shape he was shown, it was not unusual for Lail to throw 100 cylinders in a day—each 3 inches wide by 4 inches tall—at the rate of $1.50 a pound. “You kind of have to make a lot of pots to pay your rent,” he says. “A lot of clay got moved during those years, and [the pottery community of Seagrove, North Carolina] is where I really cut my teeth,” he admits, which is not to suggest that’s where he got creative. 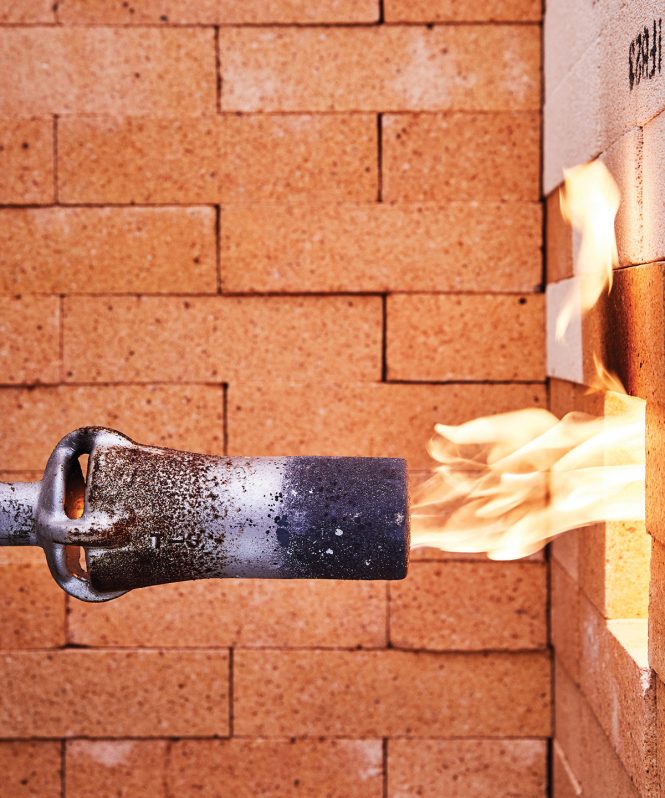 Lail ceramics are all hand thrown on a wheel, hand trimmed, and bisque-fired. The pieces are then glazed and fired in a gas kiln.

After a stint doing production work for ceramicist Michele Quan and Jono Pandolfi in the Northeast (plus a year spent playing music full-time in New York City), Lail launched his own company. Working as a contractor allowed him to save his pennies, buy a house upstate, and make all his dreams come true—plus a ton of pots with his signature stamp.

Today, he has more than found his groove. Lail Design was founded in 2016 by Lail, lauded as a master thrower, and textile designer Jennifer Bowskill. From their home studio in Woodstock, they brainstormed a basic foundation line of ceramics intended for everyday use. Lail has likely made the same mug more than 1,000 times; still, each one’s a little different from the next, and his craftsmanship gets better and better every year. 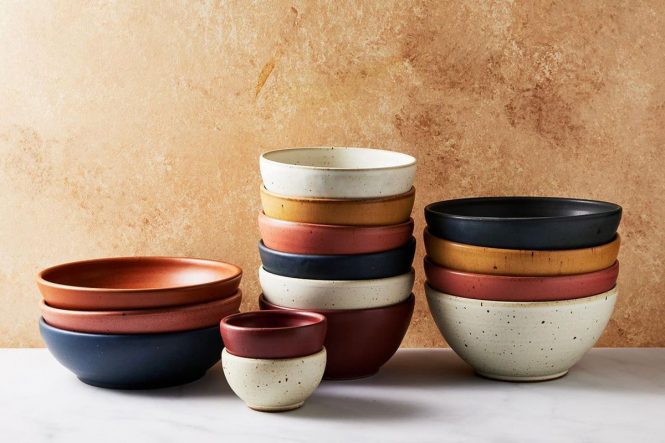 “It’s not complicated, it just works,” Lail says of a philosophy equally evident in his studio and shop as it is in the dishes drying on a rack in his kitchen. Over the summer, he had a SUNY New Paltz student pugging for him—which equates to mixing clay, balling it up, and weighing it out. “She made 100 balls [of clay] for me yesterday,” Lail explains, each weighing in at two pounds (which, when finished, will be a bowl of 8” in diameter). He’ll throw 100 bowls, and then eat dinner with his family.

Lail’s eponymous line of wheel-thrown stoneware is made in small-batch firings and new product releases—boasting super-saturated, hand-mixed glazes in nature-inspired hues such as fawn, bluestone, moss, and rhubarb—sell out quickly.

Lail at work on the wheel

He believes it takes seven years to become a potter, a title one earns when they can pay the bills selling their wares. Despite the ensuing decades, his perspective remains unchanged: “The best pots are really, really simple.”

Lail Design ceramics are available locally at Scribner’s Catskill Lode in Hunter, Hartland on Hudson in Leeds, and the Woodstock Way Hotel.