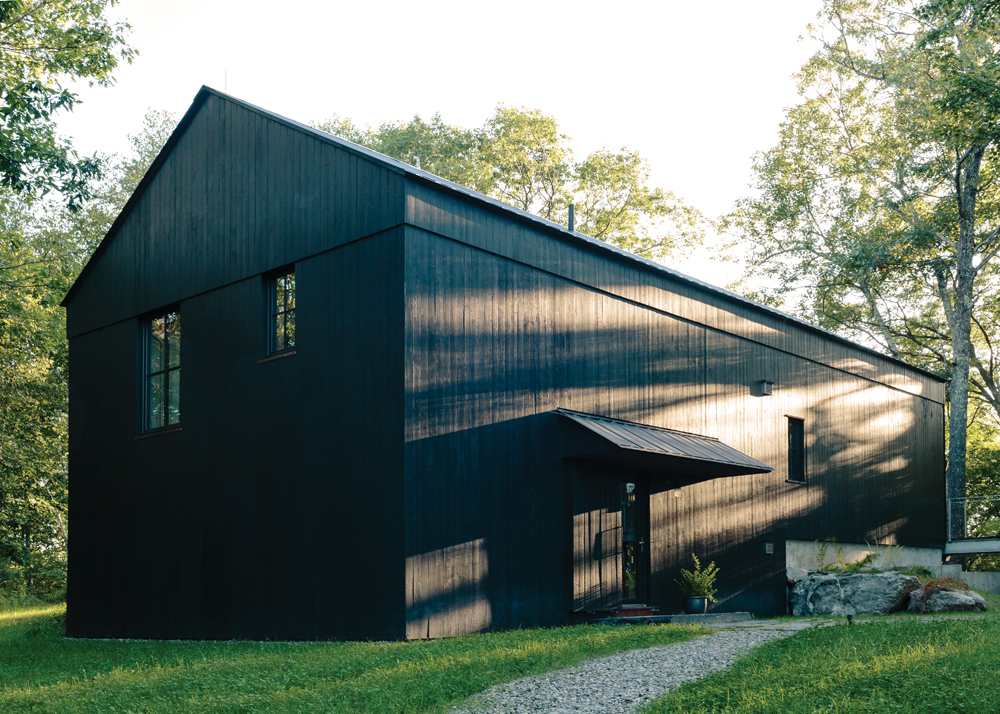 Bordering Massachusetts is the Columbia County town of Ancram, which lies just 18 minutes southeast of the county seat of Hudson. Although the rural area’s most famous product is the massive chain its iron works forged to blockade the British fleet on the Hudson River during the Revolutionary War, it was agriculture that was Ancram’s main source of commerce for centuries. Its early immigrant residents were mostly Scottish farmers who arrived in the 1740s to grow other crops; dairy farming arose with the advent of the railroad, which allowed fresh milk to go to New York and other markets. Many of the historic barns that embody the county’s agricultural traditions can still be seen dotting its landscape. And one of them, built in the mid-19th century and saved from collapse, became the outbuilding of—and architectural inspiration for—Fox Hall, a gorgeous Passive House built by the award-winning firm of BarlisWedlick. 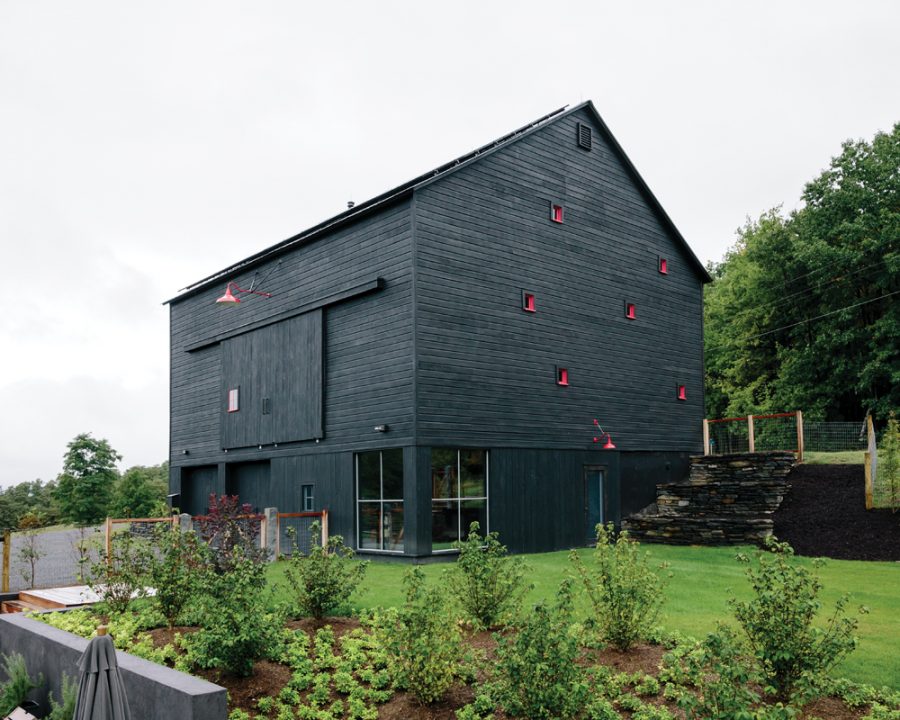 The barn is designed to be a place for gathering. In the studio apartment on the ground floor, Intus windows are oriented to maximize solar gain. The upper-level windows peppering the barn’s façade are set off by a lipstick red hue. Inside the barn, a wood burning stove heats the space. Forty-eight solar panels on the barn’s roof collect and store electricity in a battery back-up panel.

“[The barn] was brought in from a nearby farm,” says BarlisWedlick’s cofounder and principal architect, Alan Barlis, about the antiquated edifice, which now serves as a garage and guest house with a Passive-designed studio apartment. “About 15 to 20 percent of it had to be replaced due to its age, but it was just the right size and shape for the conversion, and it has such great character.” Now wrapped in warm-sunlight-conducting black siding, the ancillary structure features a loft with a fireman’s pole leading to the downstairs apartment, a woodburning stove, and a rooftop photovoltaic array that provides power for the property.

“Being able to reuse an existing building really reduces your carbon footprint,” explains Barlis. “Doing a passive retrofit with the barn was a little more complicated than usual [for older buildings], because it’s small [650 square feet], and smaller buildings don’t leave you much room for a passive-certified envelope. But this one had just enough space inside for us to build this perfect, air-tight little box for the apartment. The client lived there while the main house was being built.” The barn has a Tesla charging station, which was actually how Fox Hall came to be.

“The client was living and working in New York and wanted a getaway in Columbia County,” Barlis recalls. “He came to us asking if we could just build him a cabin where he could stay and charge his Tesla on weekends. He found the property and things just started happening from there.” Although the outbuilding was finished in 2012, it would be a bit before the main house was completed. “It took some time to understand the land, how the house would be situated to align with the views and the rest of the geography,” says Barlis. “[The client] wanted a quiet, contemplative, wonderful place where he and his family and friends could stay, and where they could host parties and small musical events and film screenings. But he also really cared about being as off-the-grid as possible, about having net-zero solar and really healthy interior air quality. That meant we could really push the design to focus on it being as passive as possible.” Construction on the main site began in 2014 and took approximately one year. But it was certainly worth the wait. 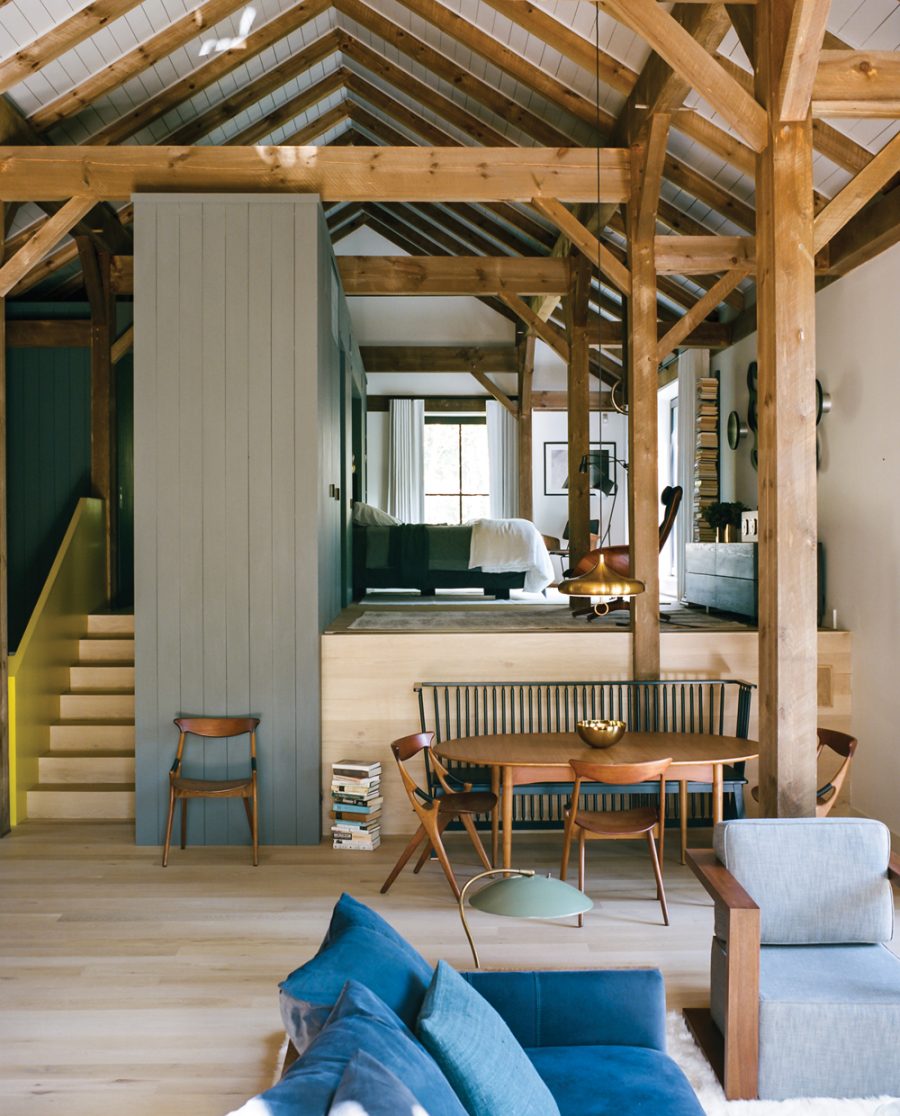 The living, dining, and bedroom areas feature an open plan but can be separated by a rising steel wall that emerges from the bedroom floor via the turn of a crank. A mix of vintage and reproduction furniture, such as the dining table and Danish modern chairs and a shaker-style bench by Ilse Crawford for De La Espada, grace the space. 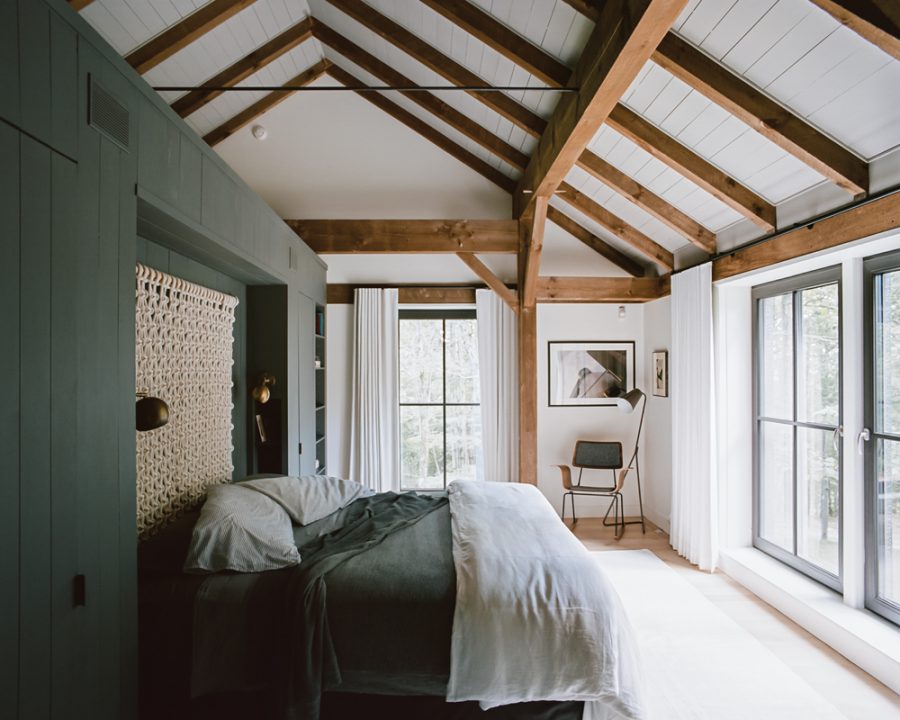 In the bedroom, a hand-woven macrame panel (done by Sally England) becomes the headboard, and simple bedding maintains a minimalist feel. The builtin wood storage wall is painted Kendall Charcoal by Benjamin Moore in a matte finish, which was used on millwork throughout the house. Isaac brass sconces by Schoolhouse Electric illuminate the room alongside a floor lamp from Crate & Barrel. The custom-made rocker is by Onefortythree in Las Vegas.

The green-roofed garage portion, covered in insulating native plantings, echoes the sod houses of frontier farmers and more recent Earthship designs, while the natural swimming pool—the first in New York State—utilizes water gardens for all of its necessary filtration. Perhaps the most eye-catching section of the design, though, is the three-story, cedar-framed tower that’s connected to the main house via a wooden foot bridge. In addition to a sauna, the tower boasts a second-level seating and dining area and third level with a swing.

“It’s a really resilient, long-lasting house,” says Barlis about Fox Hall. “Fifty or a hundred years from now, I feel, people will still appreciate the craft and timeless methods of living with the land used to build it.” 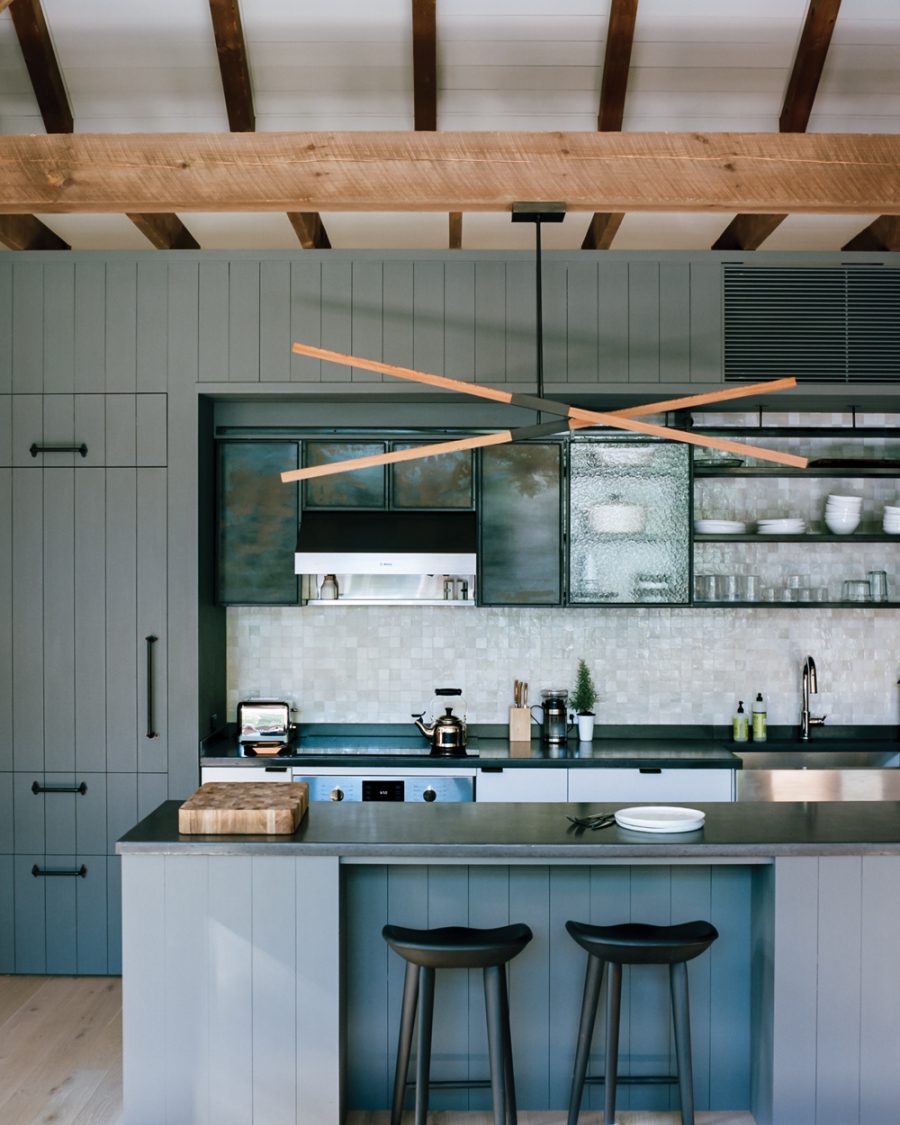 A kitchen island with a concrete surface from Get Real Surfaces is illuminated by a custom Stickbulb LED lamp above. The timber beams overhead are finished with LifeTime Wood Treatment, a stain made from plant extracts and minerals. 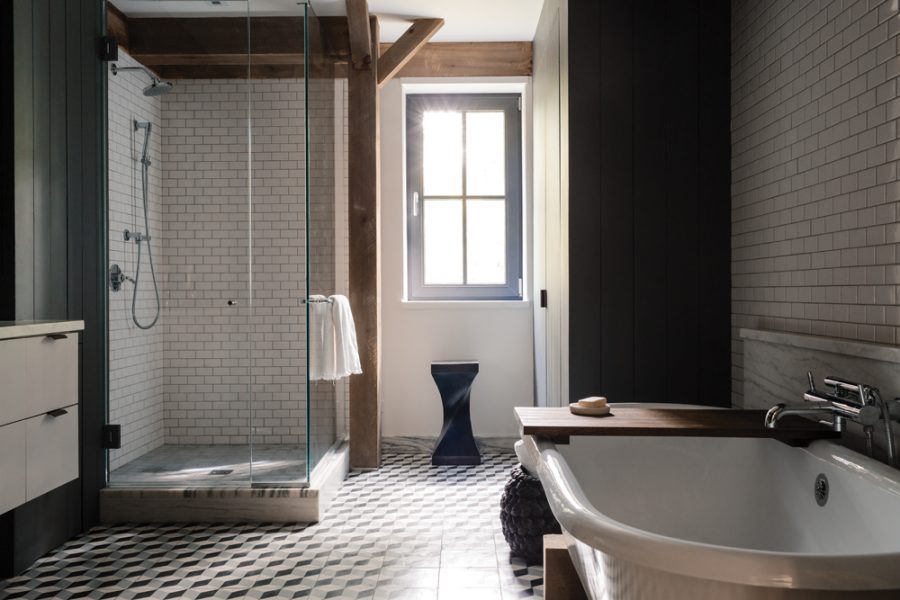 The main bathroom features a 68-inch-long Signature Hardware cast-iron tub cradled by a base of the same Eastern white pine used for the timbers. Underfoot are Cube concrete floor tiles from Mosaic House and the subway tiles are Daltile’s Rittenhouse Squares in a running bond pattern. The stone details are made of honed Montclair Danby marble. The Twist stool is from Classic Country.