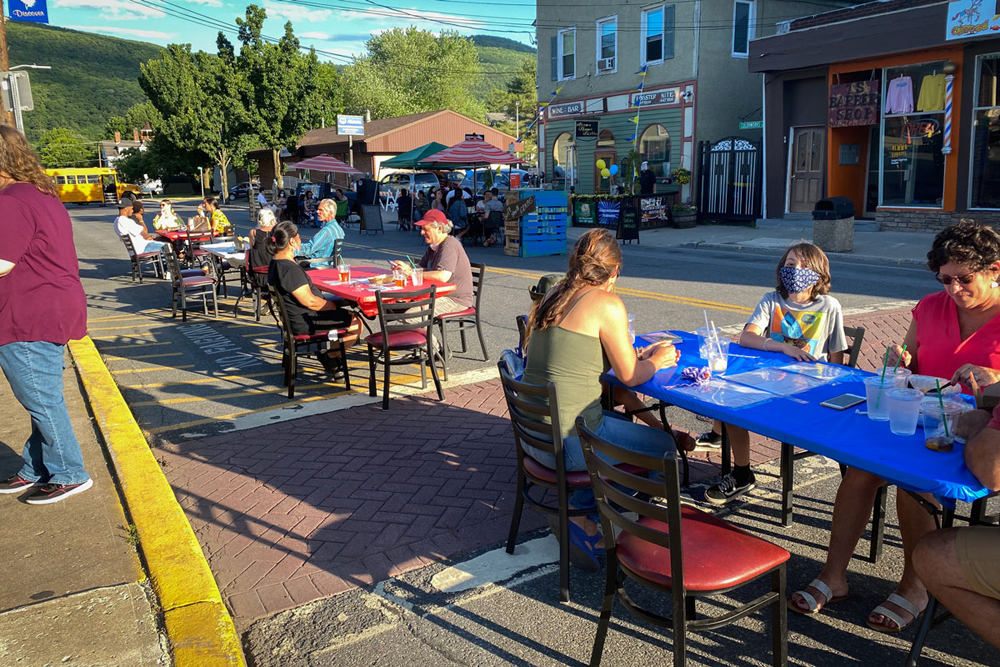 Proximity to Major City: Ellenville is 99 miles from New York City and 81 miles from Albany.

Ellenville, located where the Shawangunk Ridge nearly touches the eastern Catskills and two creeks converge to form the Rondout Creek, is one of Ulster County’s most economically and ethnically diverse municipalities. Home to groundbreaking industrialists, bisected by the D&H Canal and the “Old Mine Road” (now Route 209), and gloriously scenic, Ellenville has long been both destination and way station.

The village began with a large land purchase in 1798 by Alpheus Fairchild, who christened the area Fairchild City. His original home, in the heart of today’s village, was sold to the Hormbeek family, whose tavern became the seat of local government; when the community needed a new name to apply for its own post office, innkeeper Nathan Hormbeek’s sister-in-law Ellen “swayed them with her charms,” as local lore tells it.

Ellenville’s original chief industries—lumber, glass, and pottery—gave way to hospitality and spring water. Knife-making had a good run, too; it was said that every pioneer wagon needed a “Napanoch axe” from Ellenville’s neighboring hamlet, and Imperial Schrade—formed in the mid-20th century through the consolidation of five older cutlery companies—still employed over 200 when it closed in 2004. Channel Master, founded in 1949 by Joseph Resnick with $7,000 from the sale of his brother’s nearby cabbage farm, sold $12 million worth of TV antennas a year by 1954 and gave rise to an aluminum plant. The local airport is named after Resnick, who went on to become a congressman.

Ellenville’s last large factories closed in the 2000s, succumbing to the national trend toward offshore manufacturing, taking several hundred blue-collar jobs with them. (Genuine Schrade blades are still prized by those in the know.) But it’s hard to keep a good village down, and a considerable renaissance has recently been bolstered by intelligent local governance aggressively pursuing grant opportunities and presiding over environmental remediation of former iron and scrap metal yards.

Two state prisons, the medium-security Ulster Correctional and the maximum-security Eastern Correctional, are co-located in neighboring Napanoch and employ many Ellenville residents; Eastern, one of New York’s oldest prisons, resembles a castle.

In response to COVID-19, Ellenville has been “adorned with gorgeous flowers,” says Amberly Jane Campbell, publisher of the Shawangunk Journal, a weekly newspaper that has taken the place of the 140-year-old Ellenville Journal with solid local reporting and a website, NewsAtomic, that aims to become a one-stop shop for hyperlocal publishing. That’s thanks to “some of the current and former students [who] got together with the school art department and made beautiful murals,” she explains. “And they’re closing the street by Restaurant Row on weekend evenings for outdoor dining. It’s a gloriously peaceful place to be right now.”

When the pandemic hit, the village had an enormous advantage in place: Ellenville Regional Hospital, nationally recognized for its emergency department and quality of care. “We streamlined the workflow, locked some doors, changed patient rooms to negative airflow so any virus would get blown straight out of the building,” says hospital CEO Steve Kelley. “It worked. No one caught it here. We had 28 COVID patients who came to us from other hospitals after being on ventilators, and they all went home.”

Locals feast—though mostly on takeout these days—at the Publik House, Dominick’s Pizzeria, and Tony and Nick’s Italian Kitchen and enjoy fine Mexican from Gaby’s Cafe, pizza at Arianna’s, and farm-to-table at Aroma Thyme Bistro. Barthel’s Farm Market and Creamery offers fresh produce, baked goods, and ice cream; and Cohen’s Bakery has been been famously making pumpernickel and rye for almost a century. Most years, people flock to Shadowland Stages, a renovated Art Deco gem whose staff is now putting together a lineup of live performances for 2021 while presenting a classic film series online. The Ellenville Library and Museum, repository of local history, began serving patrons curbside this summer.

Outdoor activities are big here, and the Shawangunk Mountains offer several options, from the simple charms of the Rail Trail to rock-climbing adventures for the hardiest. Then there’s personal flight—Ellenville is considered the best hang-gliding spot east of the Mississippi, and the folks at Mountain Wings will teach you how.

Peaceful marches for racial justice were happening twice a week at press time. “I went to one and it choked me up,” says Campbell. “All these beautiful local children—all races, girls in hijabs, athletes, and they’re all friends. They march around, then sit and talk. They have good role models—this is a community where the lefty radicals and the conservatives sit together in positions of power and get things done. Our police train in verbal judo.”

“The market is extremely hot—it’s almost a frenzy, it’s crazy, like after 9/11,” says Mary Sheeley, a broker with Stoeckeler Realty. However, she adds, “You can still find some pretty good bargains here, but you can’t hesitate, go mull it over and come back Tuesday, because by Tuesday it’ll be gone. Things are gone almost before they hit the market.”

As of July, Ellenville still had inexpensive fixer-uppers with good bones; three-bedroom, two-bath houses were available at well under $100,000 for those willing to invest some TLC. Under or around $200,000, you can find updated and/or slightly larger versions.

Much of the village’s housing stock consists of older Colonials and saltboxes on half-acre lots, with some of the larger ones divided into multifamily units in the $250,000 to $400,000 range. A five-bedroom, 3,500-square-foot ranch with a great room, cathedral ceilings, and attached two-car garage was being offered for $449,000.

But buyers in Ellenville should be wary when it comes to internet services, cautions Sheeley. “The village has free WiFi everywhere now,” she says, “but there are still places in the outskirts with nothing but dial-up. We’re working on it, though.”