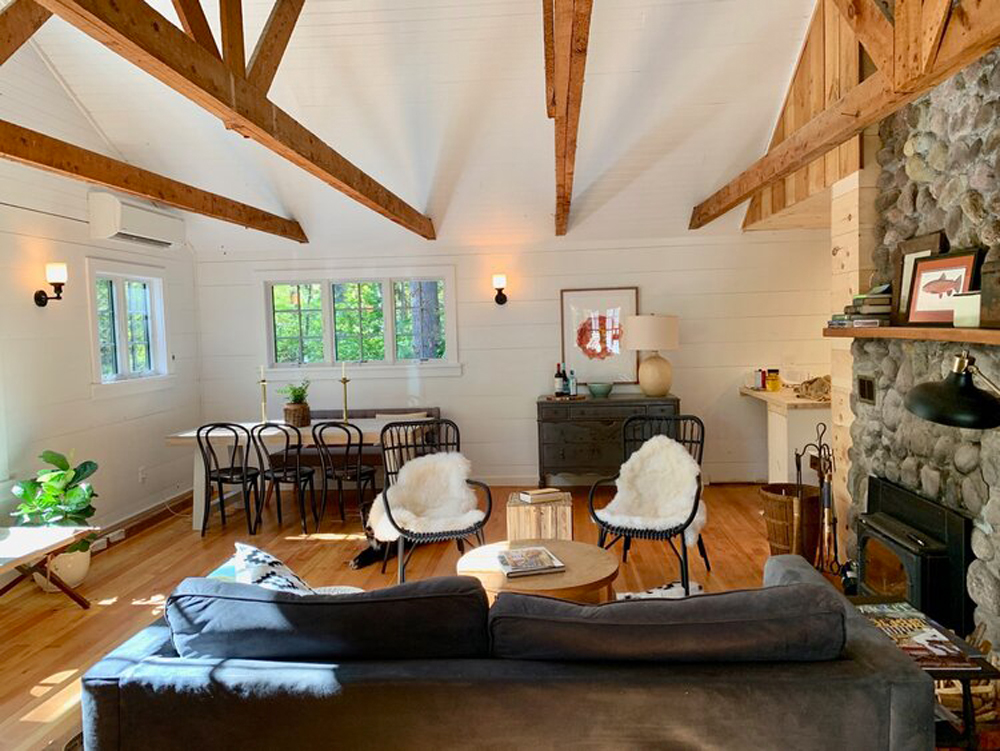 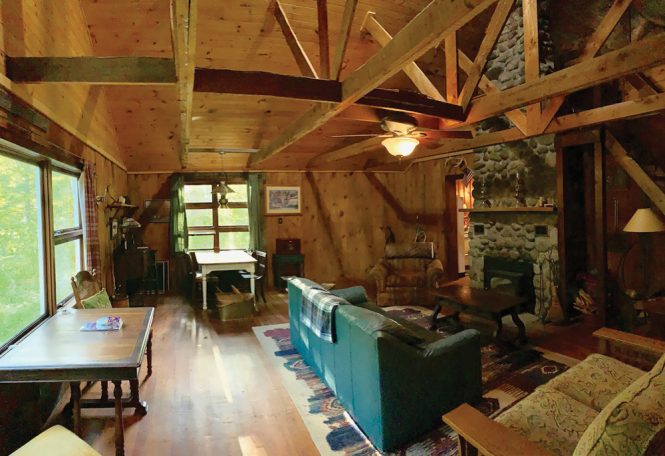 The great room at Blue Quill cottage before the reno

When the phrase “rustic, peaceful Catskills retreat” comes to mind, the image of Blue Quill Cabin is about as perfect a match as one is likely to find. Nestled among tall, sheltering trees and overlooking the headwaters of the Neversink River, the cozy cabin contains more than enough charm to satisfy any solitude seeker.

This bucolic spot in Claryville, a hamlet of the Sullivan County town of Neversink, is the perfect place to wind down and forget about the wider world for a weekend—or longer.“The most Googled word for people in New York who are looking to visit the Hudson Valley is ‘cabin,’” explains Jennifer Grimes of Red Cottage Inc., which manages the vacation rental. “And our guests always tell us that Blue Quill Cabin is exactly what they were hoping for with the idea of a cabin in the woods. They want to experience something that’s ‘rustic’ and completely opposite of their lives in the city, but without sacrificing creature comforts like the ones Blue Quill has.”

The two-bedroom 1950s cabin—just under three hours from New York—sleeps four guests comfortably all year round and is set on four acres that also include Pine House, a screened outbuilding with a sectional sofa perfect for lazy afternoon napping. The main structure was outdated and not quite as warm and welcoming when Grimes, whose company was established in 2007 and currently owns and oversees 50 area rental properties, acquired it in 2019. “It had all natural-finish wood inside, pretty dark,” she says. “I repainted all of the walls and ceilings a nice, neutral white, while leaving the cross beams unpainted to add dimension. There weren’t many windows, and the ones that existed were smaller. I added more windows and replaced a lot of them with larger windows, which let in tons of sun and give you amazing all-around views of the woods. You can literally watch the river from bed.”

Besides brightening up the cabin dramatically, Grimes’s renovation also warmed it up, literally. “The fireplace was the only source of heat, so I added two modern split heating units,” she explains. “One in the bathroom and a kickspace heater in the kitchen.” The stoic stone fireplace was fitted with a natural gas insert and the kitchen and bathroom were given updated makeovers with clean-lined counters, all new stainless-steel appliances, new sinks and fixtures, and a retiled shower.

Other amenities include an outdoor grill and fire pit with seating, WiFi service, an outdoor shower for the warmer months, and cable TV complete with Netflix and Amazon Prime.

The newly built wraparound deck is another way to enjoy the sublime surroundings, which include a nearby seasonal swimming hole. Fresh water anglers will be hooked by the fact that the Neversink River is considered by many to be the birthplace of American fly fishing. And Livingston Manor, with its two microbreweries, is only a 30-minute drive. “Being able to sit under the trees by the river, with a cup of coffee in the morning…” muses Grimes. “It’s really a dream.”