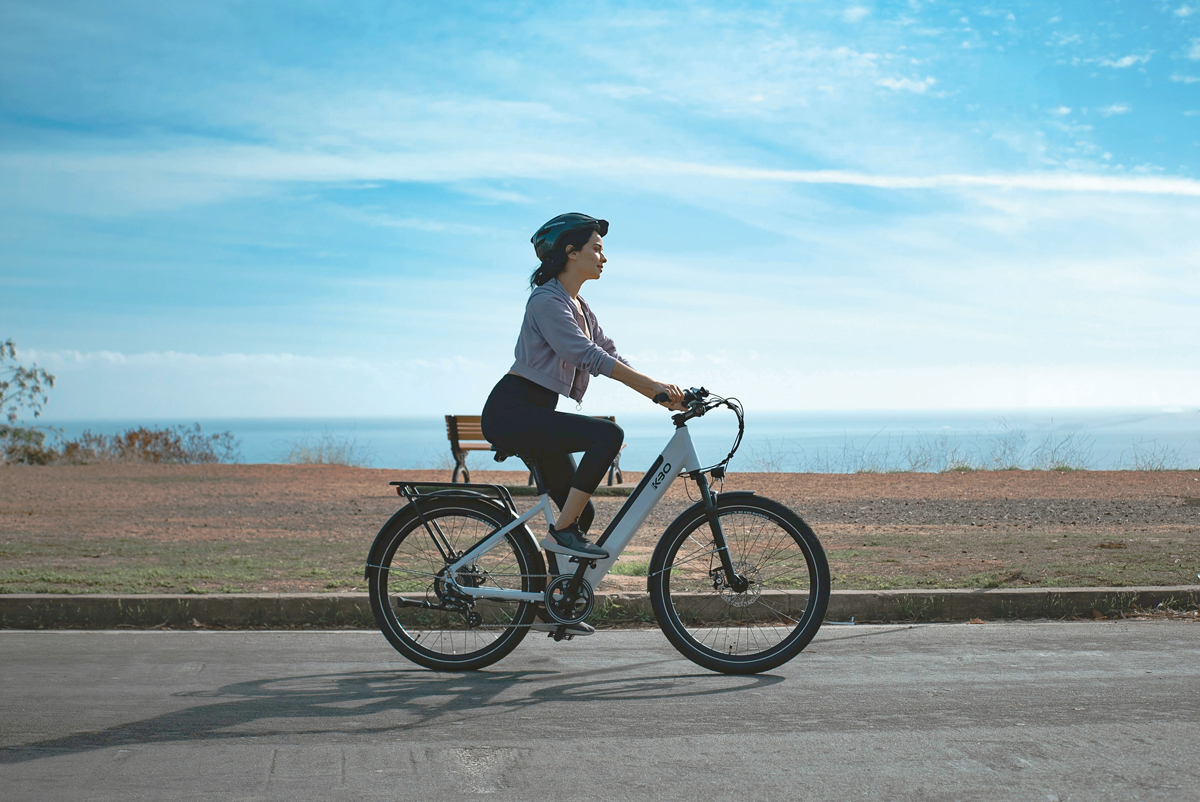 E-bikes are hot. According to Ken Tooker of Pleasant Valley Bicycle Shop, sales are up 40 percent from last year, and in 2021, sales were up 40 percent from the previous year. And it’s not just tech appeal, according to Tooker. “It’s getting to be a social event, with groups of people riding together, for example on the rail trail,” he says. “People with disabilities are buying them. People are trying them and then get their spouses riding too.”

Who should be thinking about getting an e-bike?  “Anyone who wants to get outside and have fun and exercise,” Tooker says. And people who want to increase the role of bikes in their mobility. Compared with a conventional bike, e-bikes involve less effort, “You don’t have to worry about getting up hills,” Tooker explains. Pedal-assist e-bikes have a sensor, which kicks in the motor to help you when you need it.

Prices may vary from under $1,000 to as much as $8,000 for e-bikes. Riders focused on exercise should investigate e-bikes with adjustable settings for how much help the bike will give you while riding. Potential commuters may want to look for the ability to use the motor exclusively when desired.

“We sell quality, $2,000 and up,” says Tooker of the options at Pleasant Valley Bicycle Shop. “Around here, I haven’t seen many people using them to commute; that’s more in the cities. There are pedal assist and throttle types; we sell the pedal-assist ones only. These have maximum speeds of 20 and 28 mph.”

A poster child e-bike rider is Holly Shader, a recently retired science teacher who hikes, cycles, skis, and loves the outdoors. “I love it!,” Shader says. “I had a Raleigh Detour, a class one electric-assist bike with pedaling required and no throttle. It provides assistance to a maximum speed of 20 mph, at three levels: economy, normal, and high, in which the rider can adjust with the push of a button.” Was? Why past tense? Shader’s garage suddenly burned down, destroying the bike, which is soon to be replaced.

“The Hudson Valley is hilly,” she says. “My partner was in much better shape than I was. Having the e-bike allowed us to go on many long, enjoyable rides. I could keep up easily, we could go farther than we would have had I been riding a traditional bike. As I became a stronger rider, I needed the assist less, but it was always lovely to have when going up inclines. It built my confidence and let us focus on the views and the experiences.”

“Although the range was an estimated 50 miles, I found that I could go much further since I did not need the assistance all of the time. We could go on at least three 25-plus-mile rides between charges and the battery charged in a few hours.”

The only downside, for Shader, was the weight of the bike: 35 pounds. “It’s not exactly what you want for a roof rack,” she says. “Platform bike racks are becoming much more common and I will be investing in one soon!”

The throttle type of e-bike may be more powerful and some types go much faster, but they are not legal in New York State parks. And with greater speed, there is greater risk.

Regulations about throttle e-bikes and maximum allowed speed vary from state to state. It’s important to review New York State DMV rules in detail about maximum speed, what constitutes an e-bike versus a motorcycle or scooter, and where specific types (maximum speed/capabilities) of e-bike may be ridden.

In terms of safety, battery quality is another key; UL-listed batteries are important. Other than that, Tooker advises, “Safety considerations are the same as any cyclist or car regarding following the rules of the road. A helmet is a very good idea, but not required except in state parks.”

Tang has learned by experience about e-bike batteries. “Don’t store them in the cold,” he says. “When storing, set at 80 percent. And get yourself a decent charger—the stock ones may not be that good.”

Having had a couple of accidents in traffic, Tang urges, “If you’re going over 30 mph, get a full-face helmet.”

Buying online may save you money; the prices are lower and some under $1,000. However, Tooker cautions that it’s better to purchase an e-bike where you can get it serviced; it can be harder to get parts for bikes purchased online.

It’s not passed yet, but New York State Senate Bill S3080A, which would establish a ride clean rebate program for electric-assist bicycles and electric scooters, has passed the Senate and is pending a vote in the Assembly.

Sponsored by State Senator Julia Salazar, the draft bill would offset 50 percent of the purchase price of a new electric bicycle or electric scooter with a cap of $1,100.