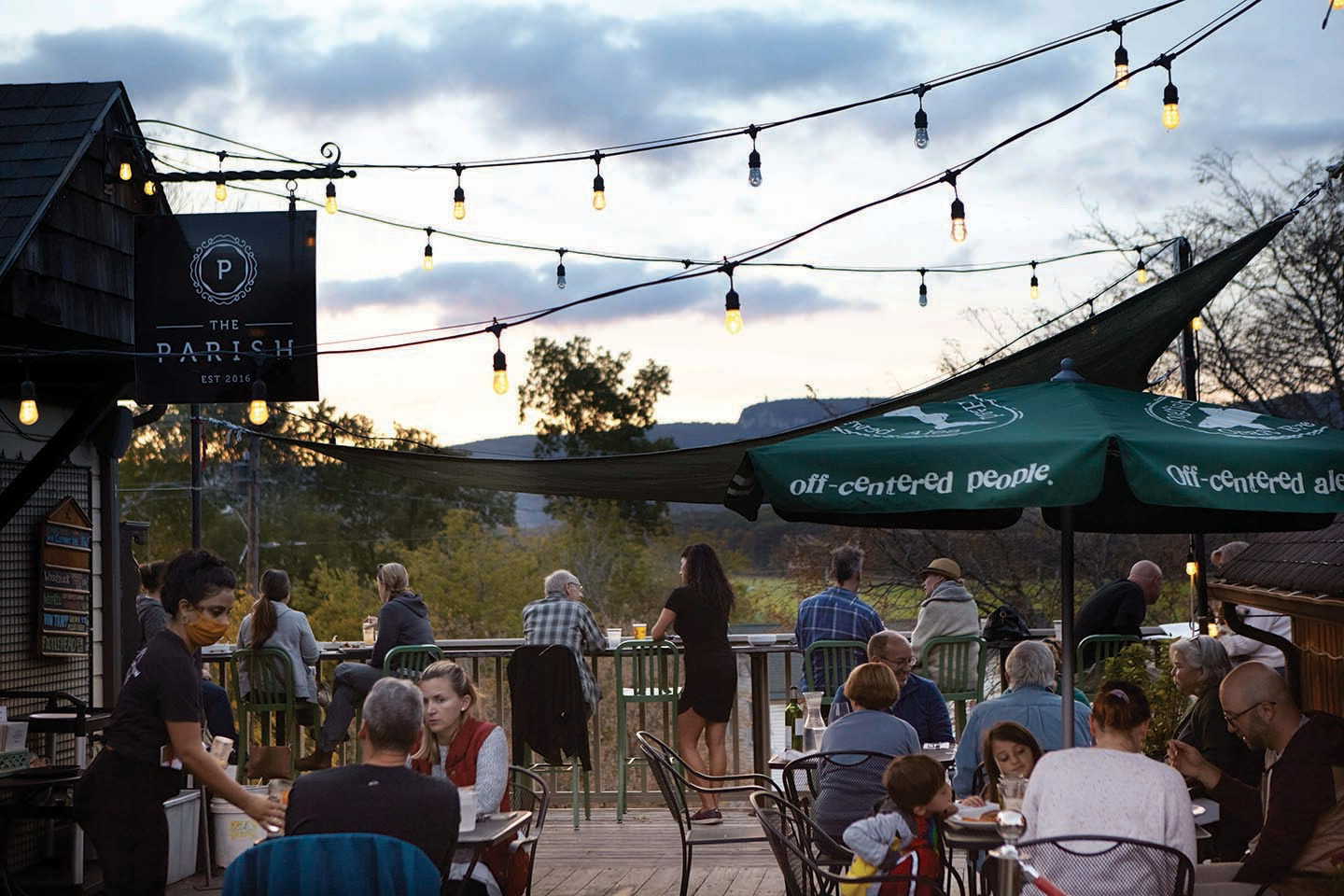 Proximity to Major City: New Paltz is 83 miles from Manhattan

Nearest Hospital: Vassar Brothers Medical Center is 12 miles away in Poughkeepsie; HealthAlliance Hospital is 14 miles away in Kingston.

New Paltz is the kind of place where, amid your daily routine, you’ll be suddenly struck by something breathtaking. A fresh glimpse of the Shawangunk Ridge, sunbeams striking aged brick and stone just right, a sign in a shop window that makes you laugh out loud, a random act of kindness or inspired lunacy happening right before your eyes.

New Paltz is what happens when you invite generation after generation of eager learners to come stay awhile, and then a great many decide to make it a lifelong love affair. Since the time of the Esopus Munsee, this has been a charming place to live; the descendants of the first Europeans to arrive in 1678 have since joined hands with indigenous descendants and scholars to try to learn more about those days, working among some of the oldest houses on the continent.

Those early French Huguenots formed a committee, the Duzine (“twelve men”) who remained large and in charge till around 1800, and it may have been more than a rumor that they stayed in control of the formalized town administration that arose soon afterward. With rich farmland nourished by the Wallkill River, the place prospered, spreading up the hill from Huguenot Street along the river. The 19th century saw the addition of a college (1830) and a railway station (1870).

Careful curation has preserved a lot of history and open space; you won’t find a Walmart or a Target here, and when Marriott wanted to buy part of the Shawangunk Ridge to site a resort in the 1980s, locals dug in their heels and fought against it. New York State bought the property in 1987 and established Minnewaska State Park Preserve.

You can still find folks who are nostalgic for the era of Spring Weekend concerts at SUNY New Paltz in the 1970s, when bands like Frank Zappa and the Grateful Dead played in the “Tripping Fields” on campus. Most will admit, however, that the school’s transformation into a top-flight state university has its benefits, not least the atmosphere of town/gown collaboration that now reigns where conflict once raged.

Karali Pitzele grew up in New Paltz in the 1970s, moved to Brooklyn after college, and returned to her hometown full-time in 2019. “I moved back because I’m in love with this town,” Pitzele says. “Growing up, I always felt the strong sense of community, and I’m still friends with the people I knew then, which gives this amazing sense of continuity and cohesion,” she says. “And there’s always been this sense that the life of the community, from the sewers and sidewalks on up, is deeply and intelligently cared for. The people in charge are thoughtful, transparent, and inclusive. People really try to live their values here.”

As you’d expect, Pitzele is never at a loss for something fun to do. “The college brings a certain cosmopolitan feel, and a range of offerings you wouldn’t find in other small towns,” Pitzele says. “I really enjoy engagement. I don’t always opt into every conversation, but I know I can if I want to. There are so many ways to feel connected here.” 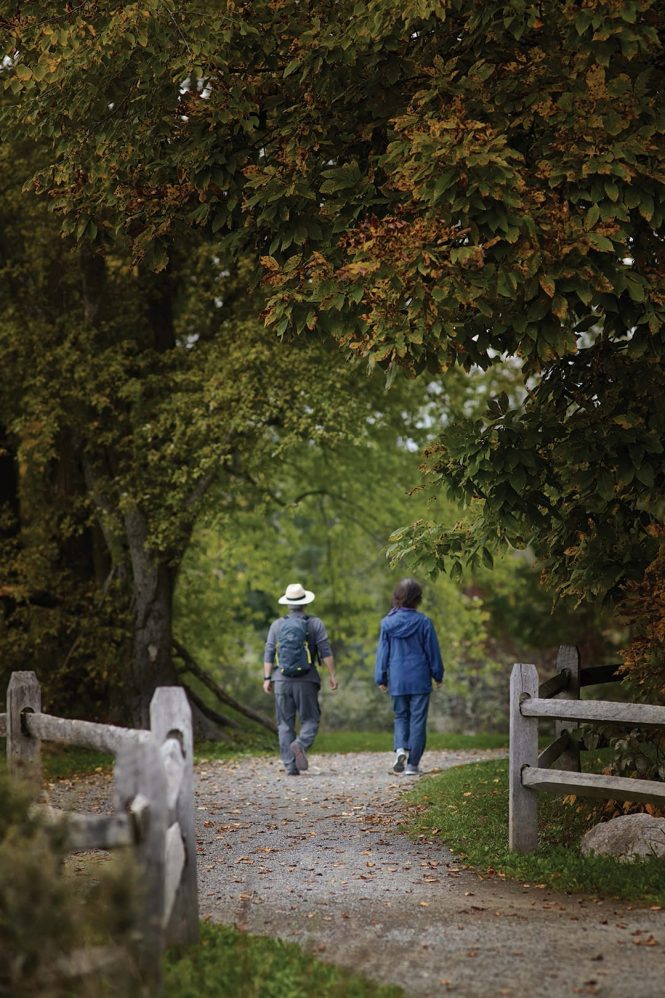 The River to Ridge Trail connects downtown New Paltz to the Mohonk Preserve.

When she’s not doing nonprofit board work, she enjoys keeping up with the downtown business community, with its mix of legacies and new arrivals. “Lagusta’s Luscious [vegan chocolates] just closed one shop and they’re redoing their North Front Street place, and I can’t wait to see what she does with it,” Pitzele says. “The students have their own pursuits, but they bring the base to support so much diversity—you’d never have great Thai and pho and Vietnamese in a town this size. What has evolved here meets my needs, possibly better than it did when I was younger.”

Besides Lagusta’s, Pitzele is a huge fan of the vegetarian Indian fare at Krishna’s Kitchen and the Middle Eastern-inflected French menu at RUNA, not to mention the social scene at the Bakery or down at Jar’d Wine Pub and at the breweries, wineries, cideries, and distilleries that have sprung up in more rural spots.

And she’s wild about the performance scene. “Denizen Theater at Water Street Market is amazing. There are little concerts out in front of the Groovy Blueberry building right across the street—that same organizer runs a weekly improv class, the Happenstancery,” she says. “And down the road in Highland, we have the home of Playback Theatre and psychodrama at Boughton Place. It feels to me as though many things of great importance to the wider world are being nourished and preserved right here.”

Donna Brooks, Associate Broker with the Clement, Brooks & Safier Team at Berkshire Hathaway HomeServices, says inventory is loosening up—a little. “It feels like there’s a steady trickle of houses, and buyers have more choices because of that,” she says. “For two years, we’d all rush out to see one house the minute it listed. We’re getting back to spending an afternoon looking at several houses and that’s kinda lovely. It just feels better, from a buyer’s perspective, to have a few days instead of a couple of hours.”

Though the frenzy has abated some, realtors are still packing their weekends with showings leading to a Monday review of all offers, and having financing or cash in hand is still key. “I think it’s a healthier market right now, with buyers having options,” says Brooks. “You just have to stay realistic but optimistic, and find your best one. The right mindset, tools, and knowhow are still the keys to success.”

Listed at this writing were several three- and four-bedroom ranches and colonials, some in the village and some in the surrounding town, priced between $350,000 and $550,000. In the $700,000 range, you can find 3,500 square feet of living space in a 1940 stone fortress with massive beams, period built-ins, and mountain views or a five-bedroom, architect-built Victorian in the heart of town. Condos on Huguenot Street can be had for under $200,000.

Probably long gone by press time: the Major Jacob Hasbrouck, Jr. House, a grand 1780 Dutch Colonial home being offered for $1,495,000, and the Round House, a fairytale tower of stone and custom cedar on 10 acres that’s listed for $1,790,000. But fear not, it’s New Paltz—another distinctive, whimsical, or wild listing will come along.