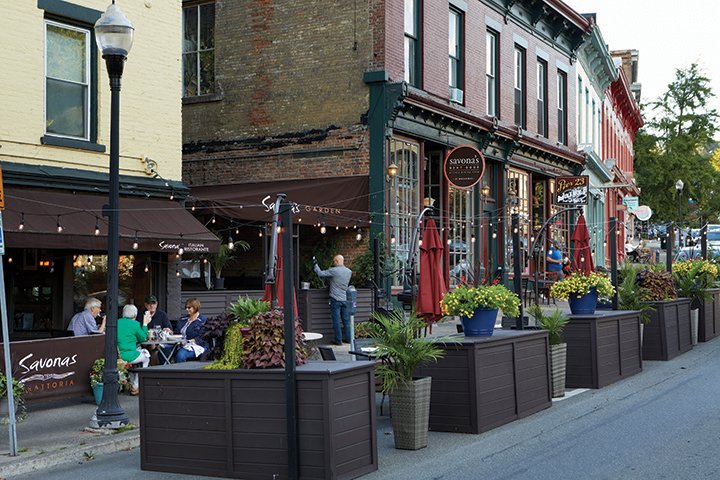 Transportation: Kingston is accessible by Exit 19 on Interstate 87. Adirondack Trailways buses stop in Kingston. The nearest Amtrak station is 11 miles away in Rhinecliff. Nineteen miles away in Poughkeepsie, both Amtrak and Metro-North stop. Ulster County Area Transit (UCAT) buses run throughout Kingston and to New Paltz and Saugerties.

Within the few blocks of Kingston’s Stockade District, history is everywhere you look: the intersection of John and Crown Streets, with pre-Revolutionary stone houses on all four corners; the Senate House of New York’s first capital; the courthouse where formerly enslaved Sojourner Truth won her child back. Archaeological studies are ongoing on the sites of the Old Dutch Church and Pine Street African Burial Grounds; the latter recently purchased and protected in perpetuity by a collaboration between the Kingston Land Trust and Harambee.

Driving down Broadway toward the water, art is all over the place, from dozens of striking murals generated during the annual O+ Festival to centuries-old architectural flourishes. Midtown is a diverse neighborhood, with longstanding Mexican and Central American restaurants abutting newer establishments like West Kill Brewing’s tap room and Tanma Ramen. It’s also where many folks who moved out of New York City during the pandemic landed, intensifying the city’s affordable housing crunch.

Nearer downtown, the late-Victorian City Hall rules its hilltop beside the hospital. The 1915 neoclassical main building of the high school just got a major interior renovation three years ago. You’re almost to the top of the Strand now, from here, it’s a gracious swoop down to the Rondout, once a brawling port, now home to fab dining, drinking, and culture. There are boat tours, lighthouse tours, the Hudson River Maritime Museum, and the West Strand Gallery, among other retail and cultural options.

A 10-minute walk away, you can tease the gulls at Kingston Point Beach on the Hudson River, its sands salted with chunks of brick worn smooth with time, and imagine the bustling steamboat dock and carousel that ruled this peaceful spot as the 20th century dawned. Kingston is a resilient little city, a banquet for the mind and senses.

It’s had rough patches—the burning of the Stockade by the Brits in 1777, the leveling of much of the Rondout during the period of Urban Renewal, and the Great Downsizing by IBM in the 90s that sucked out 12 percent of Ulster County’s economy in a few short, shocking years. But generations of community-minded souls have kept the grass roots fertilized and welcomed waves of newcomers from every neighborhood, borough, and nation, and between that and the town’s adoption as a sort of pet project by Peter Buffet’s NoVo Foundation, the Kingston of today thrives in ways many a small city can only dream about.

“I found my house here 15 years ago, but I’ve been full-time just since last January,” says Mark Haldeman, proprietor of Wall Street’s new emporium Westerlind, an outdoor retailer with locations in Millerton, Great Barrington, and Manhattan. “And I feel a little guilty saying it, but I don’t miss New York City one bit. I always knew I would end up here full time eventually, and now with Westerlind, my career path is here too.” 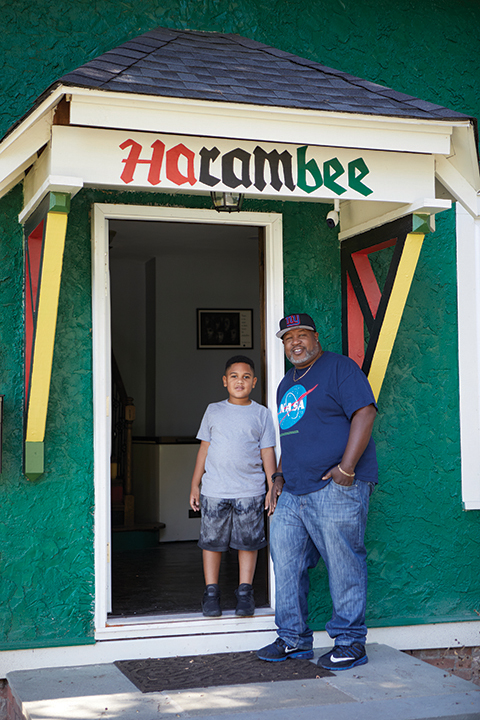 Harambee founder Tyron Wilson with his sonJayden at the site of the African Burial Ground.

Haldeman says he loves the proximity to outdoor features like the Ashokan Reservoir and Opus 40, but a Saturday spent in town seldom disappoints. “I’m big into some of the arts happening here, and there’s so much,” he says. “We lost a few favorite eateries to the pandemic, but there’s still so much choice that it’s exciting—you have the Kinsley for a fancy dinner, wonderful French at Le Canard Enchaine, then there’s Yum Yum Noodle Bar and Savona’s for casual meals. We love going down to the Rondout, to the wine bars; up here, we’ve got the Stockade Tavern in the old Singer Sewing Machine building and Rough Draft Bar and Books. Santa Fe does a great margarita on Taco Tuesdays. You really can dial in just about any atmosphere you want.”

Haldeman is impressed with the variety and skill of his retail neighbors. “I thought the area was ready for this, with places like Exit Nineteen and Theresa & Co. that sell upstate lifestyle gear and apparel at prices that aren’t too scary,” he says. “I love wandering and getting to know my neighbors—these are great walking streets. I run into plenty of my fellow Brooklyn people, but something about the vibe reminds me more of Minnesota where I grew up—friendly, down-to-earth, and welcoming.”

“Things are still very busy,” says Mary Orapello, an Associate Broker with the Murphy Realty Group and a Kingston resident for 40 years. “It’s cooling a little—some houses you can actually negotiate on—but we’re still in ‘highest and best’ competitive territory. We’re still very busy, there’s still very little to sell, and the median price is up again. We still see new people coming up every week, discovering Kingston, and loving it.”

Savvy buyers, she says, come prepared with prequalification or proof of funds in hand. “And if you see something you love, pull out all the stops. And work with a diligent broker who’s basically on speed dial.”

At the time of this writing, there were older Colonials, saltboxes and the occasional ranch style, some with updates, offered for between $200,000 to $400,000 in Midtown and a couple of outright deals—a tidy, compact three-bedroom ranch on a quiet dead-end street, in need of a little interior TLC, was listed for $179,000.

Uptown, a four-bedroom gingerbread Victorian with classic high ceilings, hardwood floors, and original details backed up by updated mechanicals was on the market for just under $500,000, as was a raised ranch just outside town with 37 wooded acres, in need of a new well. At $700,000 to $900,000, one began to see architect-built homes and stately four- and five-bedroom Colonials. For $899,000, there was an exquisitely updated Mid-Century Modern with original chandelier and in-ground pool. And, if by chance, you had $3,100,000 to spend, you could move into either of the two designer homes on 41 wild acres 10 minutes out of town and relish your very own lake and waterfalls.