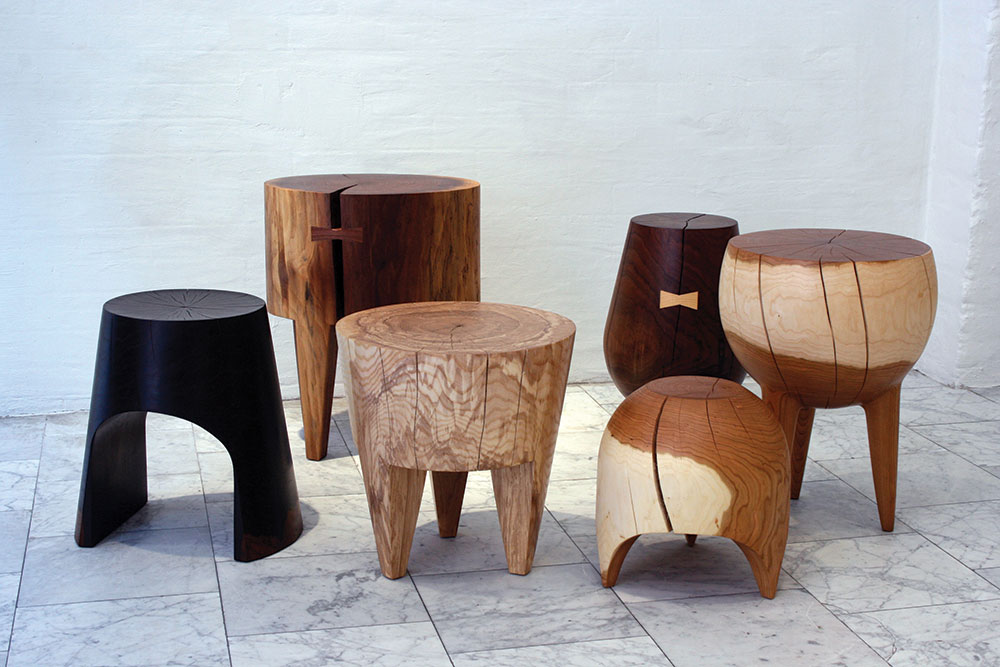 Like it or not, we are caught up in technology’s mad, headlong rush into the future, and as much as we embrace the ease and convenience technology brings, we sometimes resent its depersonalization of our lives. So, in reaction to that—or perhaps in spite of it—an interesting trend is shaping up: 21st-century design is becoming decidedly personal. Even as more goods are mass-produced, custom-made goods are coming back, especially when it comes to home furnishings.

The Samuel Dorsky Museum of Art, located on the SUNY New Paltz campus, is showcasing the movement toward handmade and one-of-a-kind objects in its current exhibit, “Made for You: New Directions in Contemporary Design.” The show runs until July 10 in the Dorsky’s Morgan Anderson and Corridor Galleries.

“In an era of technology, when we can buy everything we want or need on the Internet, people like things unique,” says the exhibition’s curator, Jennifer Scanlan. “Each piece in this show has its own personality. Owning one is like having something that a friend made in your home.”

About 20 artists have contributed to the exhibition’s array of handcrafted home goods, including: Atlas Industries, Sheila Bridges, Doug Bucci, Tom Burtonwood, Emily Cobb, Deborah Ehrlich, Sharan Elran, EyeBodega, Kieran Kinsella, Christopher Kurtz, LALOON, Malfatti Glass, Andrew Molleur, Nervous System, Michael Puryear, Kathy Ruttenberg, Courtney Starrett, Thornwillow Press, Joshua Vogel, and Jessica Wickham. Although Scanlan, who is based in Brooklyn, had no geographic perimeters in mind for the show, most of the featured designers wound up being from the Hudson Valley, which pleased her. Buying handmade goods, notes Scanlan, is “a great way to support local artists rather than chain stores like Restoration Hardware.”

Standouts abound. Bearsville artist Kathy Ruttenberg’s The Mysterious Lagomorph, a chandelier composed of wooden branches and roots, ceramics, and glass, was created as a meditation on what her pet rabbits get up to at night; it hangs above Walked All Over, a rug bearing her self-portrait. Rosendale ceramicist and woodworker Kieran Kinsella’s organically shaped stools of reclaimed wood, which he calls “stumps,” feature wood grain, holes, and cracks as points of interest. There’s an entire wall of handmade wooden spoons by Josh Vogel, author of The Artful Wooden Spoon and owner of Blackcreek Mercantile & Trading Company, and the subject of this issue’s “Back Porch” feature. A handle-free glass carafe by Brooklyn-based Deborah Ehrlich was designed to fit into the palm of the user’s hand for Blue Hill restaurants in New York City and Pocantico Hills.

Each piece leads to ruminations not only on the relationship between material and design but on the very concept of singularity. That’s especially true of the work of ceramicist Sharan Elran, who has created a simple mold that, with a few permutations, can be used to make a unique vase for every person on the planet.

In Malfatti Glassware’s installation,“Ideas meet functional dishware,” says Scanlan. “The work is fun and irregular—handcrafting means misshapen instead of Crate & Barrel regularity. You’re getting something that actually looks like it was made by a human being.”

Conversely, though, she notes, “Just as people are interested in the craft processes of customization, they’re also looking at computer technology as a process for making very individual pieces.”

Some of the show’s most innovative objects were made possible with 3-D printing; the show includes designers demonstrating the use of a MakerBot 3-D printer on loan from the SUNY New Paltz Hudson Valley Advanced Manufacturing Center. Tom Burtonwood’s 3-D-printed Braille picture books form an interesting counterpoint to Thornwillow Press’s letterpress pieces. Two other 3-D-printed project designs relied on data. Red plastic bracelets, shaped like melted beads, are readings of the daily glucose levels of artist Doug Bucci, a diabetic; and huge, colorful plastic mats resembling 1950s Tupperware doilies, created by Courtney Starrett, graph gender inequality in America. Visitors can “read” the doilies through a smartphone app, which demonstrates that the technologically-produced can be individual as well as startlingly insightful.

And, on that note, we are most interested in your insights into Upstate House. What grabs your attention? What could you do without? What new topics would you like to see covered within these pages? Find our Reader’s Survey, due out on March 1, at UpstateHouse.com/reader-survey. I look forward to hearing from you all.