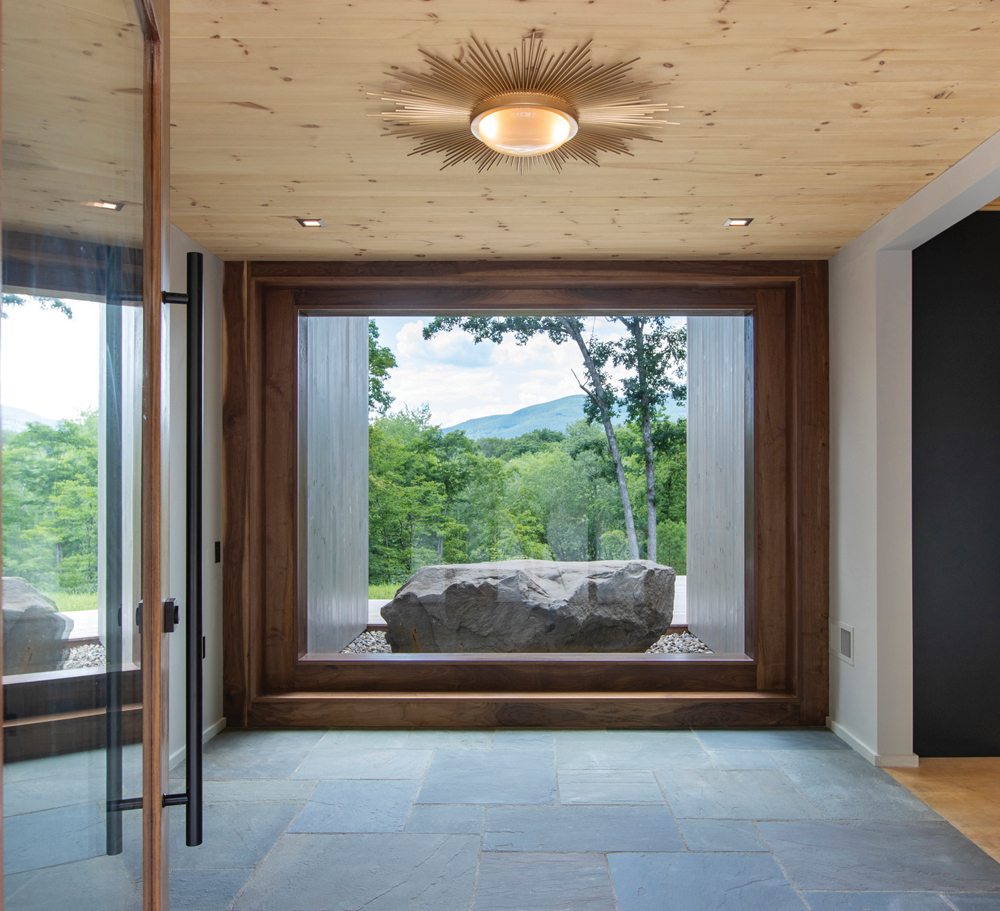 In 2017, Ken and Kristin Wenger moved upstate to Bearsville from New Jersey. Ken, a retired financial executive and Kristin, the retired director of an arts education nonprofit, had so much fun designing and building their own house that they founded KCK Bearsville Holding Company, located a second piece of land, and launched into a second career as developers.

The second property, which Ken discovered through a chance conversation at dinner in Woodstock, was a secluded, sloping 7.3-acre parcel in Saugerties with incredible views of Overlook Mountain. To design the house, the Wengers turned to the architect who had helped them bring their first to fruition—Constantine Kalesis of Astoria-based Kalesis Design Studio.

Kalesis, who has 18 years of experience as an architect and four as the principal of his own firm, began working in the Woodstock area in 2012. In contrast to his projects in the city, which almost always have a predetermined footprint, the Hudson Valley has offered him room to explore his practice as an architect. “It’s a very challenging design exercise to be given carte blanche on a raw site,” he says. “I take cues from the surroundings when developing a floor plan. Where the sun rises and sets, the vistas, and any variations in topography.” 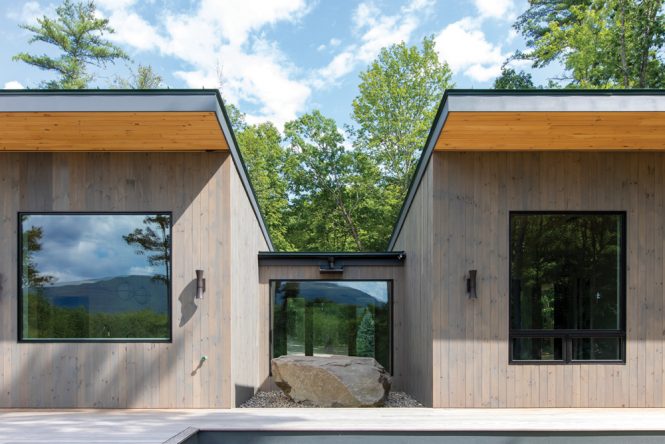 The view of the entryway from the back deck reveals the custom-fabricated metal spout that cascades rainwater onto the boulder and river rocks below.

Without an existing buyer in mind, Kalesis’ challenge was to create a house that anyone could see themselves living in. His solution was to design it as two distinct structures. His sketches articulated a sleeping wing separated from the entertaining wing by the liminal zone of the entryway between.

To further divide the space, a set of doors closes off the sleeping wing from the entryway and another closes off the entertaining wing from a guest/office suite within. This would allow the floorplan to ebb and flow according to the future owners’ needs. 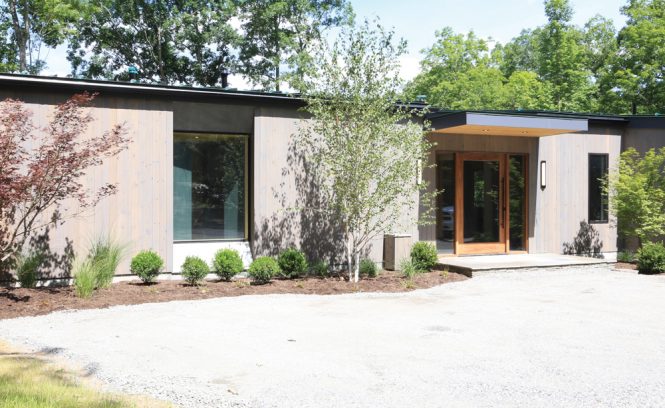 The window to the left of the entry has an exterior head and sill made of angled slabs of bluestone.

The design’s other orienting factor was the eastern face of Overlook Mountain, which rises majestically above the treeline to the west. To take advantage of the views, Kalesis designed the house on a north-south axis and gave every major room its own mountain vista and access to the back deck that runs its length. “The house is designed as a lens, framing the way you perceive the site,” he says.

To bring the design to life, he and the Wengers teamed up with Mike Fanelli of Glasco-based 3rd Generation Builders. Fanelli, who comes from a long line of builders (hence the third generation), got his start in the late `90s just as the post-9/11 housing market took off upstate. Today, 3rd Generation works throughout the Hudson Valley and Fanelli’s team does all their own general contracting, which gives them full control over the building process from start to finish.

Completed in August of this year, the Zena Highwoods House is a reflection of Kalesis’ site-specific design, Fanelli’s team’s craftsmanship, and the Wengers’ eye for details.

As you approach the house from the secluded driveway, a dense stand of pine trees gives way to a clearing that provides a panoramic view of the minimalist home against its mountain backdrop.

The house is clad in pine siding in a mottled blue-gray stain that echoes the trees that surround it. An angled metal roof (green to match the foliage) covers three distinct parts of the house: the entertaining wing, sleeping wing, and the attached one-car garage. The entryway and threshold to the garage have flat charcoal-hued roofs made from durable EPDM rubber, which reveal Kalesis’ compartmentalized architectural program.

The transparent entryway is the first of the architect’s lenses that you encounter.

The front door is a weighty five-foot-wide glass pivot door trimmed in walnut and bordered by 24-inch glass sidelights. From here, you can see through the floor-to-ceiling, walnut-trimmed picture window on the other side, which frames a 20,000-pound bluestone boulder found near the top of the driveway that now sits outside the window surrounded by a pool of river rocks. Kalesis also designed the house’s gutters to move rainwater to the entryway roof, where it flows through a custom-fabricated metal spout and cascades water onto the boulder and rocks below.

From inside the entryway, tiled in radiant-heated bluestone from Peter Shultis Stoneyard in Willow, the peak of Overlook Mountain is framed behind the boulder—a studied diorama of the Catskills. 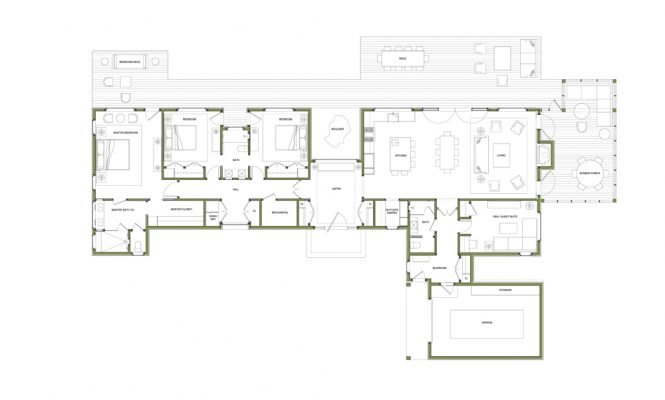 A drawing of the house’s layout.

To the right of the entryway is the entertaining wing of the house, which contains a shared kitchen, dining, and living space, a butler’s pantry, the guest suite/office space, and a screened-in porch.

The ceiling throughout is pine, which Fanelli sourced from Ghent Wood Products in Columbia County. The exposed four-by-twelve-foot rafters were milled by Rothe Lumber in Saugerties from white pine trees cleared for the home’s construction (a sustainable touch the Wengers had added to their own home). The lumber was dried by Fanelli’s team for nine months at the site. The floor is maple from Ghent, stained in Fruitwood and sealed with a matte polyurethane.

The kitchen space is sleek and sophisticated, with an eight-by-seven-foot picture window above the farmhouse sink and quartzite counter that bathes the space in light. In the middle of the room, seven-foot-wide French doors that open to the deck and accompanying three-and-a-half-foot-wide sidelights from Marvin provide expansive views.

On the far end of the room, a six-by-eight-foot picture window lights the hearth space. The ornate mantle above the steel fireplace surround is an antique mortise and tenon beam from Java, which the Wengers found at Asia Barong in Great Barrington. 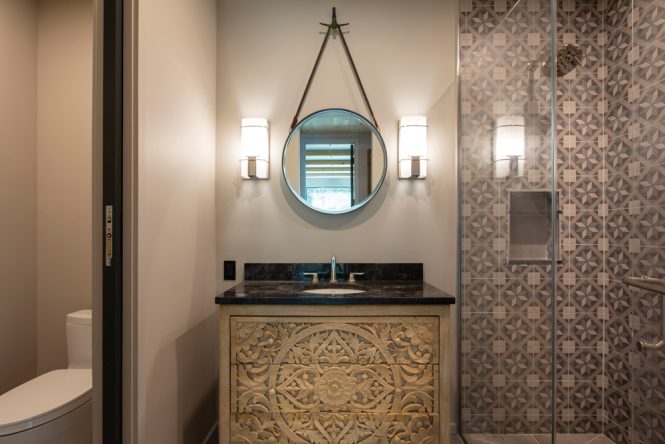 The guest bathroom in the entertaining wing.

Just off the shared kitchen, dining, and living space is a hallway that leads to the guest/office suite, closed off from the rest of the wing by a pair of antique paneled rosewood French doors from China. On the left is a 14-by-11-foot room that can function as a guest bedroom, office, or den. A full bathroom across the hall features a custom-altered engraved wood vanity from Anthropologie and gray ceramic tile from Nemo in New York City chosen by the Wengers. For the shower, Fanelli’s team hand-cut and placed the tile in an angled geometric pattern to create a drain (a feature of all three full bathrooms in the house).

At the end of the hall is both a separate entrance to the front of the house and access to the attached garage. The space is also one of the house’s four temperature zones for the ducted air-source heat pump system, which makes it easy for the space to function separately from the rest of the home if needed.

Back in the shared kitchen, dining, and living space, doors on either side of the hearth access the screened-in porch on the north end of the house. The porch’s eight-by-eight-inch solid supporting columns are also made from the pine milled from the site. 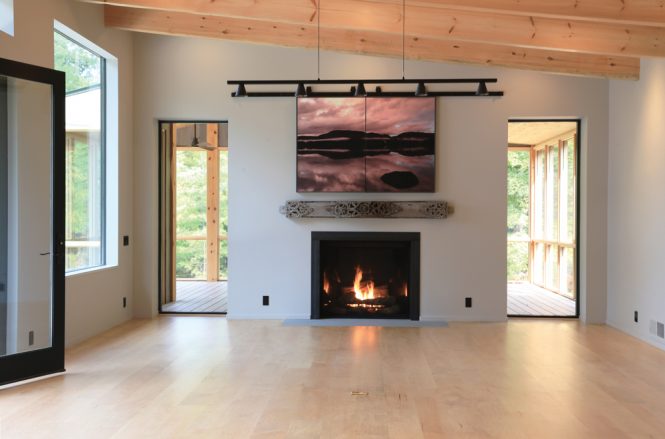 The shared kitchen, dining, and living space leads to the screened-in porch.
Photo by Constantine Kalesis.

The floors, which continue out to the deck, are Brazlian ipe, also sourced from Ghent. According to Fanelli, ipe is prized for its incredible density, which naturally protects the wood from mold. Because of this, the team chose to keep the wood unsealed, to let its almost-gray patina develop.

On the other side of the house is the sleeping wing, entered through rosewood doors that match those to the guest/office suite. To the left are two closets: one for the utilities and the other for the laundry, which has its own passthrough to the master bedroom’s walk-in closet on the other side. To create light throughout the hallway, Kalesis designed the space between the two closets as an alcove with a five-and-a-half-foot by seven-and-a-half-foot window, which looks out to the front of the house. The window’s one-of-a-kind exterior head and sill are made of angled slabs of bluestone.

Across the hall are two symmetrical 12-by-14-foot guest bedrooms with six-foot-wide picture windows that look out to the mountain and have separate doors to the deck. The two rooms share a full bathroom, tiled above the sink and inside the shower with a high-gloss celadon-hued ceramic tile from Nemo. The double sinks are inset into a Carrara marble-topped vanity from Pottery Barn that exposes the plumbing.

At the end of the hall is the 18-by-14-foot master bedroom, which also has a six-foot-wide picture window and a private door to the deck. Across from the bedroom is the master bathroom with a glass-doored 10-by-11-foot shower room. The room is tiled in a heathered gray ceramic tile from Daltile, chosen by the Wengers for its resemblance to birch bark. Above the marble vanity, another six-foot-wide window provides quiet views into the woods to the south. 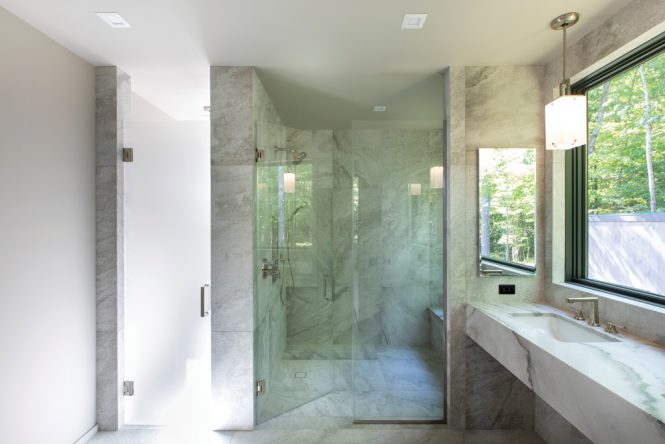 The elegant, meticulously detailed house is a close-knit collaboration between the distinct voices that shaped it. “We ended up being a very good team,” Kalesis says. At every turn, he, Fanelli, and the Wengers worked together to anticipate the needs of the future owners who would call it home and wove them together into a space that feels beautiful, functional, and livable all at the same time.

“You look at the Ashokan Reservoir, and it looks different depending on what time of day you see it,” says Fanelli. “I feel that way with this house. It’s different every time I look at it, and that wasn’t a mistake. That was all of this work coming together.”