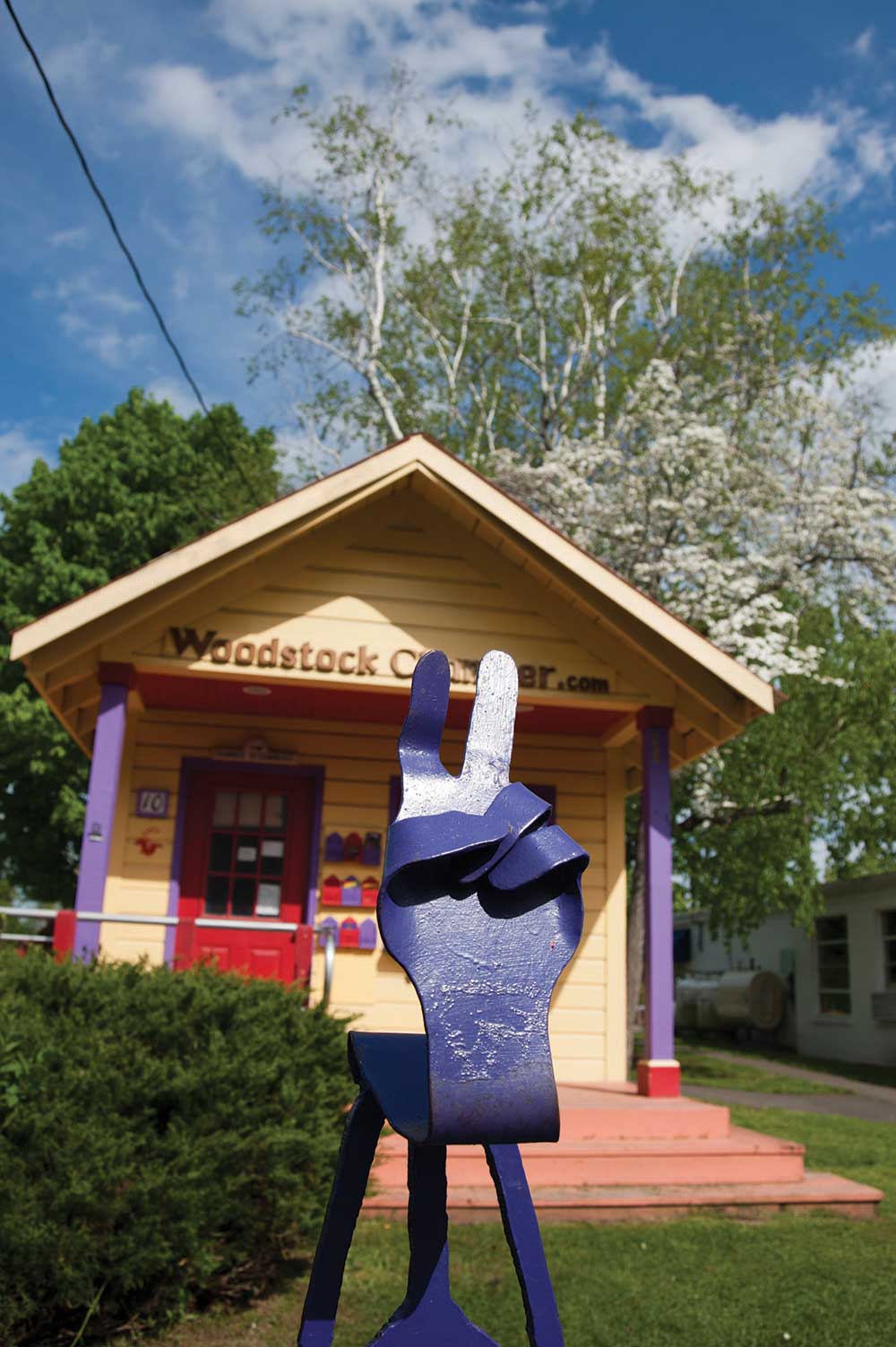 Nearest Hospital: HealthAlliance Hospital is located in Kingston, 11 miles away, with campuses on Broadway and Mary’s Avenue.

Schools: Woodstock Elementary School is part of the Onteora School District; the middle and high schools share a building in nearby Boiceville. Private schools are Woodstock Day School and Hudson Valley Sudbury School in Woodstock (both K-12) and High Meadows School in Stone Ridge (K-8).

As most people know by now, Woodstock’s eponymous festival was held 50 miles away from the actual town, but that hasn’t prevented a continuing influx of Aquarians. Nearly 50 years later, the legacy of the 1960s counterculture is alive and well in Woodstock, evidenced by a proliferation of peace symbols, store windows filled with tie-dyed clothing, guitar sculptures and Buddha statues on front lawns, and iconic photos of Bob Dylan and The Band decorating local businesses. Musicians drum away on Sunday afternoons on the Village Green. There’s a juice bar in town, along with a vegan restaurant, plenty of art galleries and innovative eateries, exotic gift shops featuring local artisans’ work, several yoga studios, independently-owned bookstores, and even two Buddhist monasteries.

Woodstock remains a bastion of liberal activism: Recently, the Woodstock Land Trust successfully helped fight a proposal to build a water bottling plant that threatened the local water supply. Yet the town’s funky streets also have a sheen of wealth. Many renowned artists, designers, musicians, and writers own second homes there, and New York City vacationers are increasingly choosing Woodstock and the Catskills over the Hamptons.

The town nonetheless preserves its aura of casual unpretentiousness. Its reputation for contrarian bohemianism started well before the 1960s. Woodstock was just a hardscrabble rural village in an isolated valley when Englishman Ralph Radcliffe Whitehead built his Utopian community of furniture makers, Byrdcliffe Arts Colony, on a nearby mountainside in 1902. When the Art Students League of New York founded a summer school in town in 1906, artists of all media flocked to Woodstock, joining one or the other stylistic camps. Some people lived in the primitive shacks of the Maverick Colony, whose annual festivals, held during August’s full moon throughout the 1920s, were a prelude to 1960s hedonism. Maverick founder Hervey White built a lovely rustic concert hall in the woods and started what is now the nation’s oldest summer chamber music series. In the postwar years, subdivisions constructed for IBMers threatened to banish Woodstock’s idiosyncratic charm, but then the festival happened in 1969, bringing an influx of hippies. Physically, Woodstock remains relatively unchanged: several streams meander through town, country lanes loop around fields and forests, and unsullied mountain views abound. 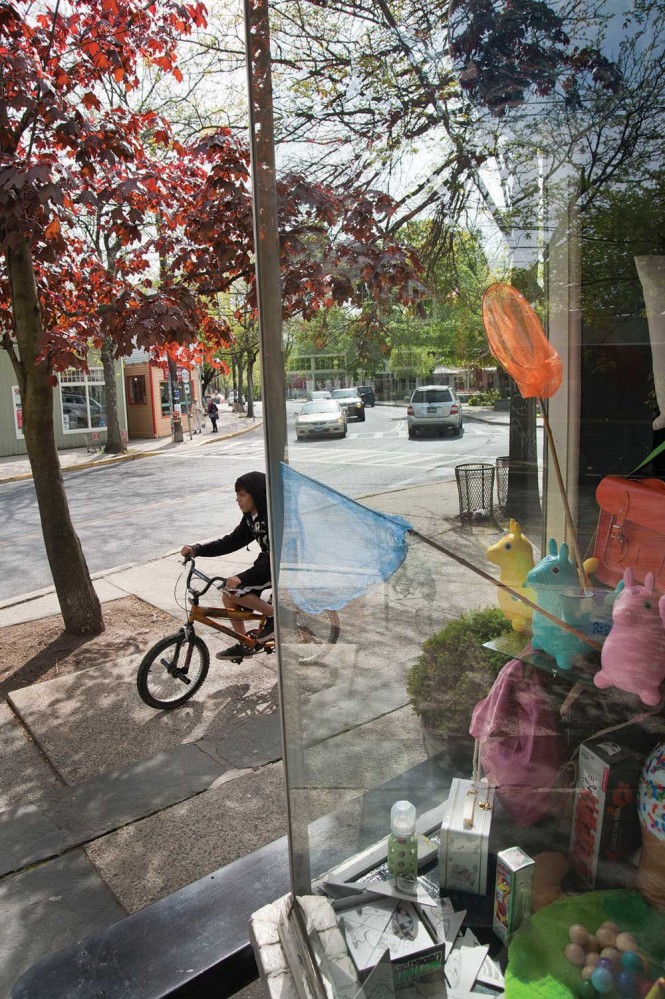 Many of Woodstock’s gabled houses, long converted into stores and restaurants, boast bright colors. The town’s art and music scene is flourishing, thanks to an abundance of local talent and the proximity to New York City. The Center for Photography at Woodstock has a modest space but offers provocative exhibitions, while Elena Zang Gallery, overlooking a stunning garden in a forest setting, presents top international artists. Intimate music venues like the Mission-style Colony Café and Bearsville Theater host well-known musicians. In the summer, a weekly farmers market takes place in town, and Bearsville Theater complex, which is undergoing a makeover, recently debuted an indoor farmers’ market. Tickets to rollicking Midnight Ramble concerts, held in the late Levon Helm’s barn, are highly sought after. The Woodstock Film Festival attracts famous filmmakers, actors and musicians every October, while the annual Woodstock Writers Festival brings in the literati (this year’s featured Jane Smiley). The many excellent restaurants include Asian, Indian, Italian, Mexican, seafood, and vegetarian cuisine, and a popular bakery.

Woodstock’s housing stock reflects its history, but low inventory can make finding a house challenging. There are cottages, Victorians, A-frames and “green-built” contemporaries. Home sales were exploding this spring, say local real estate agents. The average and median residential prices—$308,000 and $263,000 respectively—are still 15 percent below the peak in 2007, but that could change: In the first three months of 2015, four out of 16 $1 million-plus listings were in binder compared with only two sales of homes over $1 million in 2014 and just seven $1 million-plus sales in 2007. Charming Arts-and-Crafts-style cottages in town sell from $250,000 to $450,000. Modest homes, such as the 1960s-era simple ranch houses clustered in the Bearsville flats, can be found for under $200,000.