The setting of the West Point Foundry Bed and Breakfast is stunning. Located on a bluff overlooking West Point and the Hudson River, the nine-acre property affords a sunset-perfect view. A grove of 300-year-old oak trees adds a majestic presence to this historic site less than a five-minute walk to the village of Cold Spring.

But when David Watson and Marianne Sutton visited the site in 2017, a circa-1826 ugly duckling cottage marred the lush surroundings. A tarp blanketed the roof. Boards covered the windows. Trumpet vines began colonizing the exterior and the house suffered from neglect, vandalism, and exposure to the elements. One son-in-law called it a “crack den,” but the retired pediatricians became enamored with its historical significance. 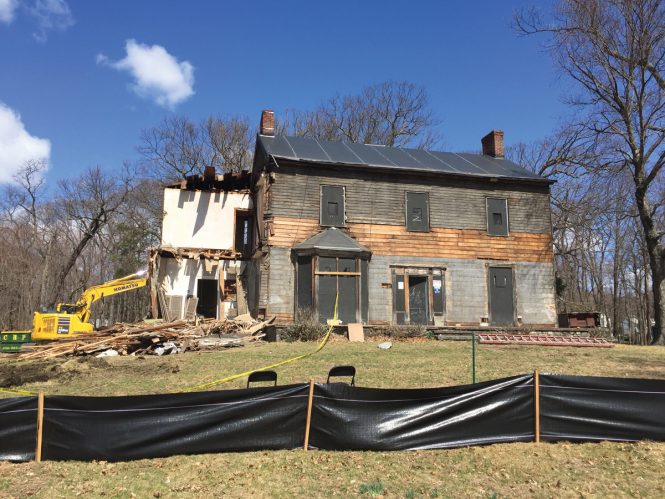 When Watson and Sutton purchased the property, it had fallen into disrepair. A tarp blanketed the roof. Boards covered the windows. Trumpet vines began colonizing the exterior and the house suffered from neglect, vandalism, and exposure to the elements, but the interior remained largely intact. The restoration and construction project took four years to complete.

To their surprise, the interior remained largely intact, evidenced by the solid floors and ramrod-straight Federal-style banisters. But snags and snarls altered the vision for what they call a “grand house on a small scale.” After four years, the construction and restoration project created a hybrid business and residence, including a new home attached to an immaculately restored historic cottage that now serves as a high-end bed and breakfast.

“We fell in love with the history,” says Watson. “Our connection has always been emotional, not rational.” 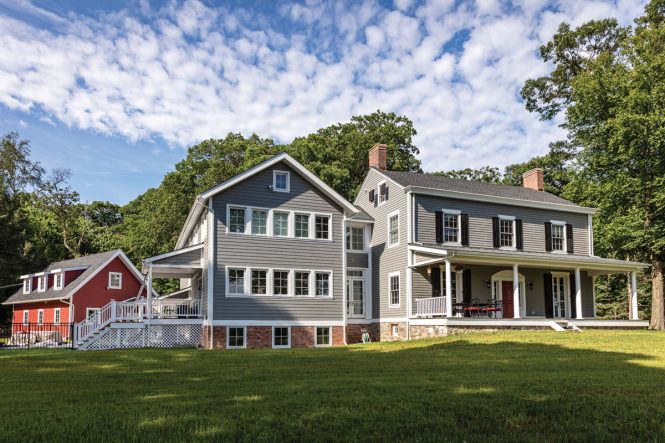 They named the inn for the West Point Foundry, whose ruins are a short stroll from the cottage and played a crucial role in transforming the nation from an agricultural economy into an industrial powerhouse after it opened in 1818. When non-profit Scenic Hudson bought the foundry complex to turn it into an open-air museum, it inherited the dilapidated summer cottage, built by foundry cofounder William Kemble to entertain a parade of famous guests (including Abraham Lincoln and Robert E. Lee).

The property comes with 50-plus pages of building restrictions put in place by Scenic Hudson, which approved the couple’s initial plans. At first, Sutton and Watson envisioned a cozy retreat from their Manhattan apartment and planned to add an extension to the historic cottage large enough to accommodate their family—including eight grandchildren. But the local historic district review board nixed the original configuration and the concept for the property evolved over time. 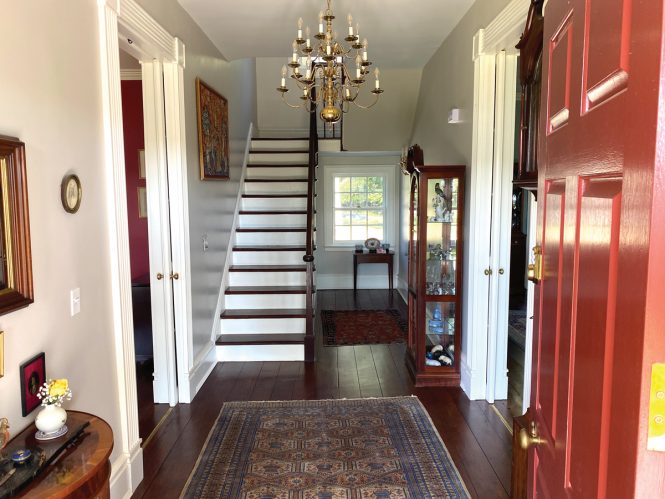 The main entrance hall of the West Point Foundry Bed and Breakfast contains the original floors, banister, stairs, risers, and ceiling medallion of the 1826 home built by William Kemble in Cold Spring

Then came more bad news: Rot had corroded half of the structural beams. To fix the problem, the house had to be elevated off of its foundation. The couple also discovered that layers of bricks that insulated the home, known as nogging, required removal.

Despite the setbacks, Watson and Sutton never wavered from their goal: creating an authentic historical renovation with as neutral a footprint as possible. “It’s not quite a passive house, but there are very few ecologically friendly historic homes,” says Sutton. She estimates that the whole complex—original cottage, residential addition, and new three-car garage—will be around 85 percent sustainable when solar panels are installed atop the new buildings. 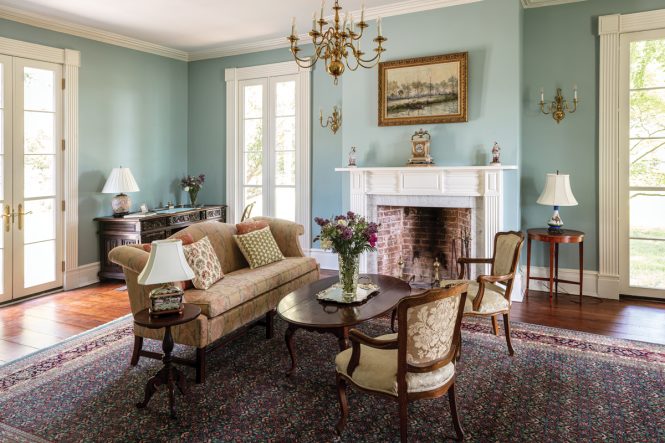 The chimney, walls and most of the trim in the sitting room is original. Decorations and furnishings are in the Federal style of the house’s heyday.

The original plan to go solar went south after they committed to Tesla tiles, which passed muster with the historic review board and would have covered the roof of the historic home. But: “The company just disappeared on us,” says Watson. “And they took our deposit.”

One notable feature of the new home is the foundation, an innovative adaptive reuse built with the brick nogging taken from the old home’s walls. But the key component to reducing their environmental footprint is the geothermal system, installed by Charles Lazin at Altren Energy in Ulster Park, which burrows almost 500 feet into the ground and allows the couple to create nested spaces by delivering heat and cooling only where it’s needed. 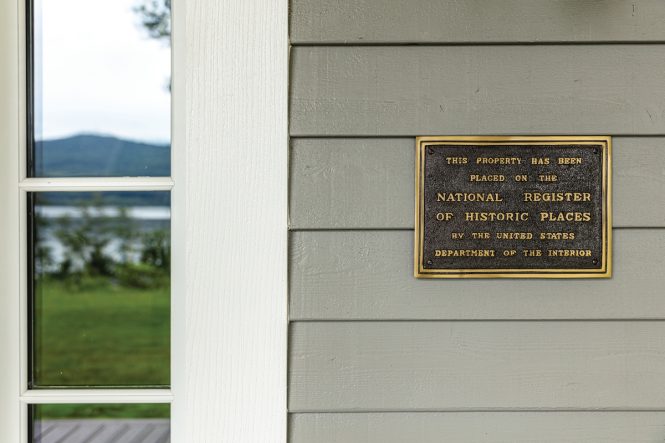 The house, built in 1826 by William Kemble, cofounder of the West Point Foundry, hosted famous guests, including Abraham Lincoln and Robert E. Lee.

This zone concept regulates the floor temperature in the new addition, including the cinema room and workout space in the basement, along with the modernized bathrooms in the guest rooms on the top floor of the bed and breakfast. Air also circulates through cleverly hidden vents.

“In the winter, we live on the first floor [of the new building] and it’s like a house within a house,” divorced from the four upstairs bedrooms and basement, Sutton says. The cover of the gunite pool provides passive heat and the hot tub will be hooked up to the solar system.

Windows add an expansive feel to the new annex. In the historic house, the carpenters discovered five sets of original pocket doors with large panes of glass that slide into the walls, probably the first of their kind in New York, according to Sutton. In the sitting room, four pocket doors once opened onto French balconies with wrought iron ornaments, but they’re too drafty to use year-round. 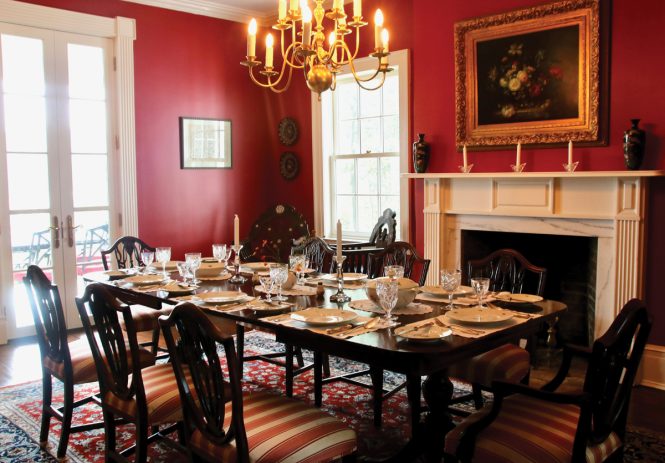 The colors for the walls inside the house were made in consultation with Benjamin Moore experts on historic colors. The dining room is Lyons Red. The chairs are 18th-century Hepplewhite.

Sutton and Watson salvaged two sets, which now close off the sitting room and the dining room from the main hallway on the first floor. Lepage Millwork in Quebec created the historic home’s new windows, which are double-paned to dampen noise from the train.

The couple had previously completed restoration and construction projects, including an apartment in Sydney and a 1950s Cape in Concord, Massachusetts, which they turned into a Colonial. They have also lived in Vienna, London, and Africa. Watson hails form Australia. Sutton, who is half-American and half-French, grew up in Vienna, a background that influenced the historic home’s decor. 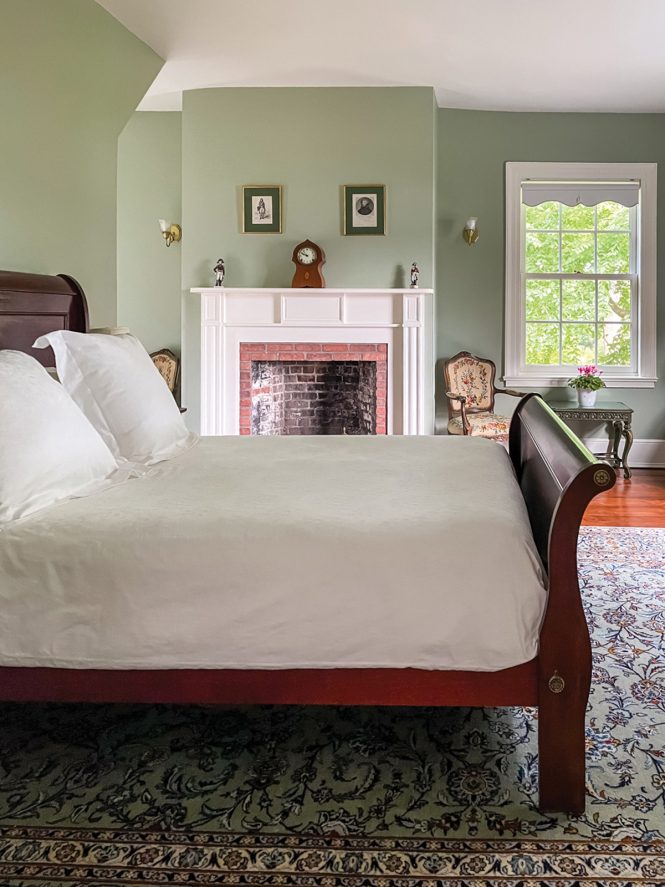 Connected to the old cottage by a narrow, glass-enclosed architectural hyphen, required by the village historical review board, the new building focuses on functionality. The large kitchen is designed to support events like lawn parties and fundraisers.

Over the years, the home’s previous owners added unattractive extensions and also divided the upstairs bedrooms with partitions to create extra rooms. The door to nowhere in the back of the main foyer, now a window, once led to an enclosed stairway to the basement, which remains unfinished and features a hearth and a root cellar perfect for storing wine. A pool table from the 1860s serves as the centerpiece of the adjacent servant’s quarters. 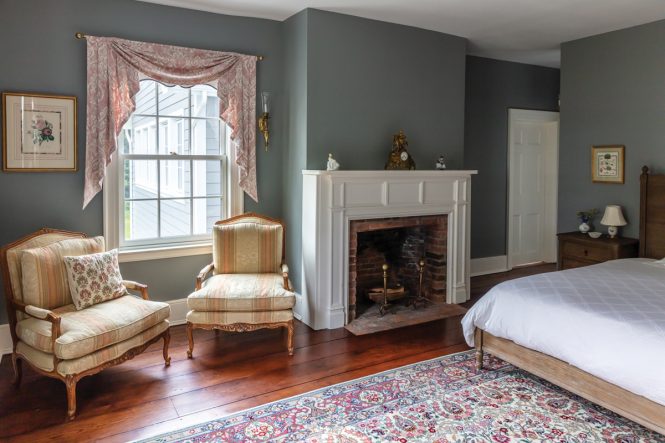 It’s no surprise that they favored an antique motif in the cottage. But these aren’t any old artifacts: The couple worked with pictures sent by members of the Kemble family to help recreate an authentic aesthetic. They tracked down three-quarters of the furniture online and in-person; the rest came from Sutton’s mother’s collection.

The design ethos favors a less-is-more approach. “You can’t cram in too much stuff,” says Watson. “The lines have to be clean.”

Prints of Vienna street scenes and an original Hudson River School painting adorn the walls of the sitting room. Painter Asher B. Durand and novelist Washington Irving often visited the home. The couple awaits the arrival of a bust of Napoleon I given to the Kemble family by Napoleon III that is now in the hands of a distant descendent. 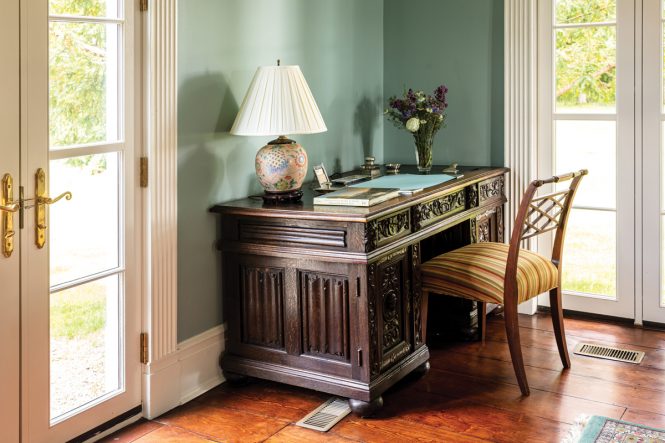 The antique desk in the living room.

Original Hepplewhite chairs once ringed the dining table, but they’re too fragile, so Henredon replicas stand in. For the walls, the couple settled on Benjamin Moore Historical Collection colors: Puritan Gray and Salisbury Green in the guest rooms; Wedgewood Gray in the sitting room and Lyons Red in the dining room, where the dark maroon hue helps stimulate the appetite, Sutton says.

Early in the process, Sutton adopted a DIY approach. In addition to building a closet in the upstairs Napoleon Room, she wired the historic home’s electrical sockets and restored the original rim locks, which are attached to the back of the doors and require skeleton keys replicated by Charleston Hardware and Lock in South Carolina. She also enjoys wielding a chain saw whenever necessary.

“We’re running the business in order to live here,” says Sutton. “This isn’t some get-rich-quick formula. You have to work hard to live in paradise.”